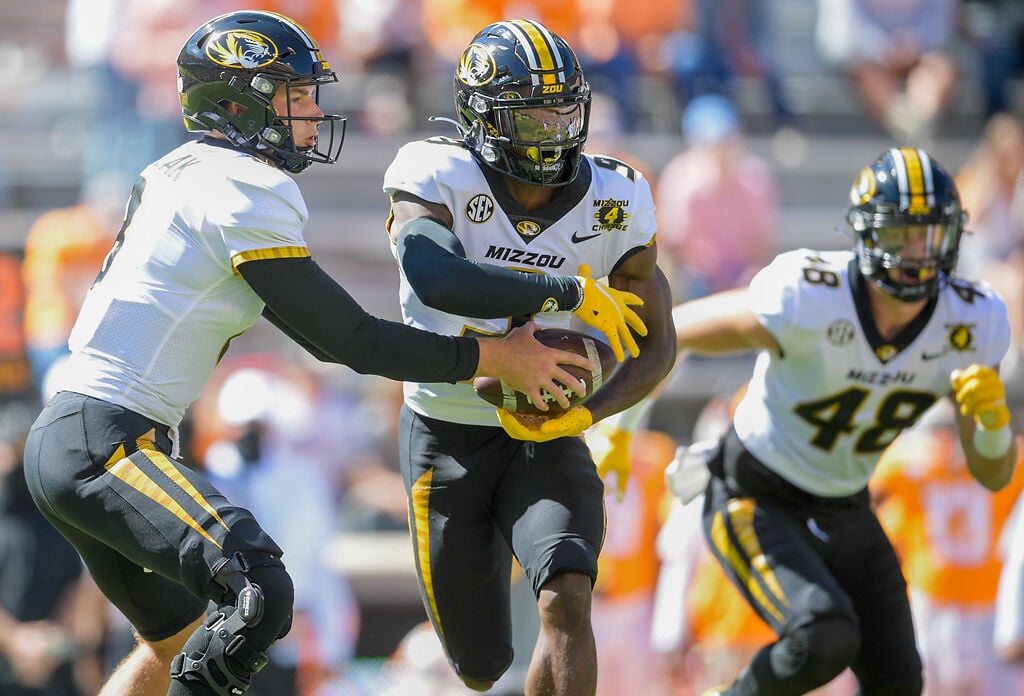 Missouri quarterback Connor Bazelak hands off to wide receiver Jalen Knox during the second quarter of Missouri’s game against Tennessee on Oct. 3 at Neyland Stadium in Knoxville, Tenn. Bazelak will likely be the starting quarterback to begin the upcoming season. 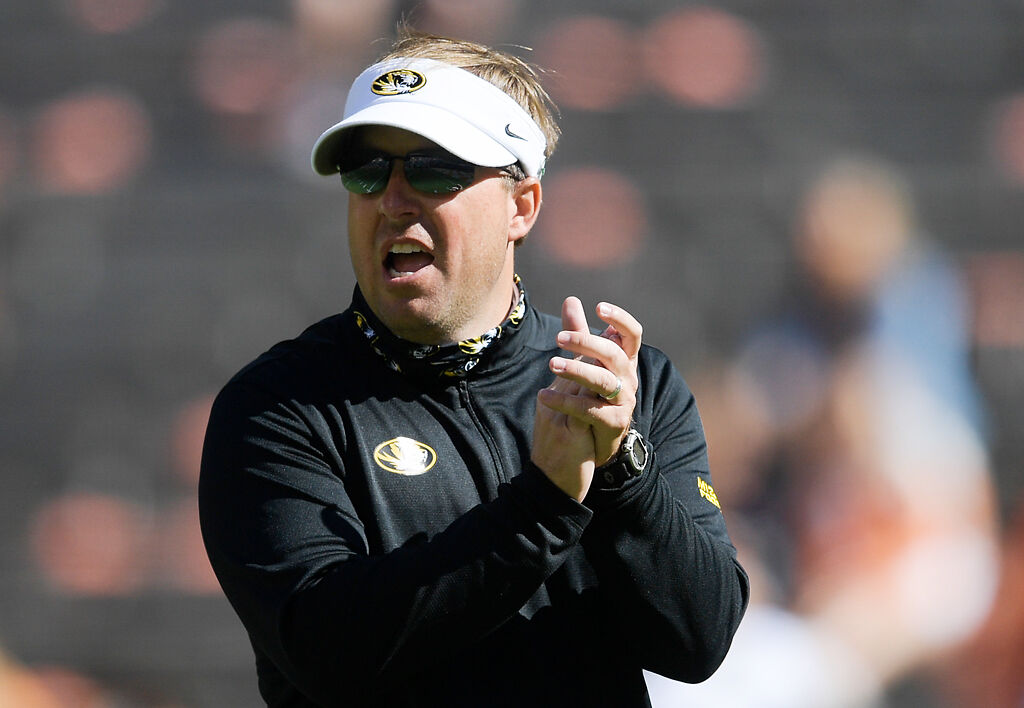 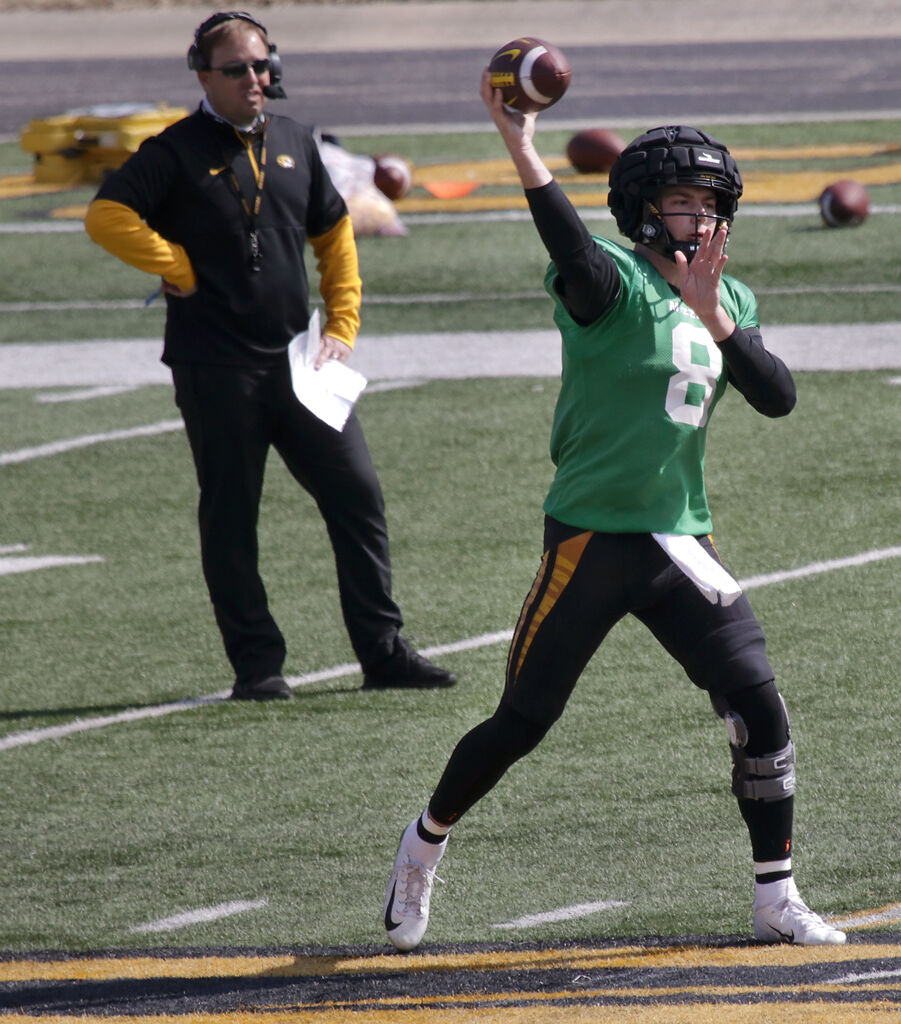 Missouri quarterback Connor Bazelak hands off to wide receiver Jalen Knox during the second quarter of Missouri’s game against Tennessee on Oct. 3 at Neyland Stadium in Knoxville, Tenn. Bazelak will likely be the starting quarterback to begin the upcoming season.

Fall camp begins this week for Missouri football as the Tigers get a step closer to beginning Year 2 of the Eliah Drinkwitz era. Connor Bazelak enters the season as the unquestioned starting quarterback, but his success may be dependent on some new faces. Here are four storylines to follow until the Tigers kick off the season against Central Michigan on Sept. 4.

For the first time since 2019, Missouri enters the season with an unambiguous starting quarterback. Bazelak started every game after Week 3 the past year as a redshirt freshman and finished the season with 2,368 yards — second in the SEC among returning quarterbacks — and seven touchdowns while completing 67% of his passes.

With a full year under his belt and more weapons at his disposal in the form of a deeper receiving corps, Bazelak will look to take another step forward in 2021. Without red-zone security blanket Larry Rountree III, who was drafted by the Los Angeles Chargers, Bazelak will have to do more to finish drives and score through the air.

This is also his first year with a full spring camp and offseason. Even if the pandemic hadn’t wiped out camp in March 2020, he would have missed at least a significant chunk while rehabbing an ACL injury from the previous fall.

“I thought last year, he really played within himself,” Drinkwitz said at SEC Media Days in July. “He’s a maverick. He went out there and went into really difficult situations and gave him an opportunity to play the game.”

Is Cooper the key to success on offense?

Drinkwitz didn’t waste time answering where he wants his offense to improve this season.

And it may be a case of simple question, simple answer.

The three areas highlighted by the head coach could be aided by Missouri’s most notable addition in the offseason: Mookie Cooper.

The Ohio State transfer already demonstrated his explosive speed and pass-catching ability during spring camp which impressed Bazelak, who said March 13 he was “hard to overthrow.”

Nearly five months later, it will be interesting to see how that relationship has progressed, and ought to make for one of the more intriguing storylines of the preseason.

But Cooper isn’t the only pass-catcher.

Though he will be the main focus of the receiving core at fall camp, O-Lineman Case Cook has another name for fans to keep an eye on.

“Tauskie Dove is somebody to watch out for this year,” Cook said on the SEC Media Days main stage. “He’s put an unbelievable amount of work in to get ready for this year.”

Most of the O-line is up for grabs

Missouri’s presence at SEC Media Days matched Drinkwitz’s message. This team is going to live and die by its work at the line of scrimmage.

Cook was one of MU’s chosen representatives in Hoover, Alabama, highlighting the importance the Tigers are placing on that line this season.

But who will be Missouri’s starters?

Though Cook insisted that he and the returning starters still have to earn their spot on the O-line this season, it’s safe to assume that Cook’s already achieved that. You can go ahead and write Michael Maietti’s name in permanent marker as the starting center, too.

The rest of that line is up for grabs.

Will Xavier Delgado keep his spot at left guard, or will OU transfer EJ Ndoma Ogar or Luke Griffin get the call up?

Hyrin White looks likely to be the starting left tackle, but could be pushed by the 6-foot-9 Bobby Lawrence.

Zeke Powell’s spot is likely the most precarious, despite appearing in nine games in 2020. Redshirt junior Javon Foster and Montana State transfer Connor Wood are each certainly in the running for the starting role at right tackle.

Fall camp should give us a better indication of who Drinkwitz and offensive line coach Marcus Johnson see as their strongest five.

New faces in the secondary

After an exodus of cornerbacks in the offseason, it appeared one of the Tigers’ weaker position groups would be even thinner in 2021. Jarvis Ware, Jadarrius Perkins and Chris Mills all entered the transfer portal after spring camp, leaving Ennis Rakestraw, Ishmael Burdine, Jaylon Carlies and Kris Abrams-Draine as the only players who saw snaps at corner the past year. Missouri gave up more than 270 passing yards in six games in 2020.

Both played for Tulsa in 2020, where Missouri defensive backs coach Aaron Fletcher held the same position. Evans played four years with the Golden Hurricanes, recording 82 tackles and 11 passes defended. Green played in 43 games over the past four years and had three pass breakups and an interception in 2020.

They’re the newest pieces of a revamped defense this year. Steve Wilks is in as the Tigers’ new coordinator, bringing a new, more zone-coverage-heavy system with him. Jethro Franklin was hired as defensive line coach in January, and will work with a group that added junior college transfers Realus George Jr. and Daniel Robledo.

Luring defenders into fouls won't be easy in NBA this year

Packers dominate 2nd half, bounce back to beat Lions 35-17

Stricker's biggest issue at Ryder Cup is getting back trophy