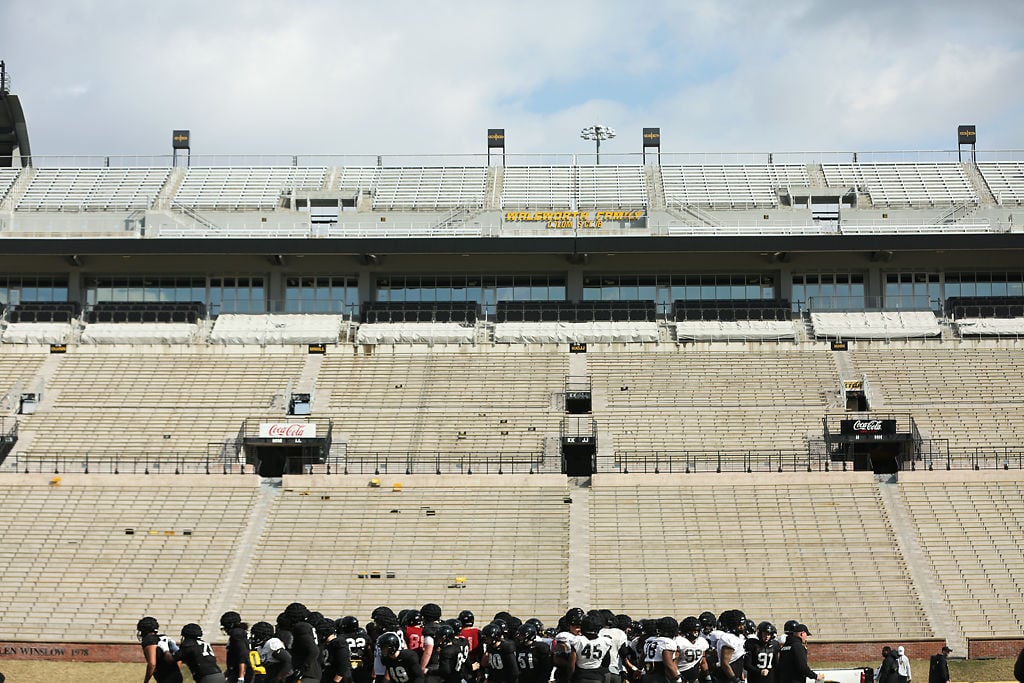 The Missouri football team huddles together at the beginning of a March practice at Memorial Stadium. If Missouri plays football at all in the fall, there’s a good chance it will play in empty stadiums due to COVID-19. 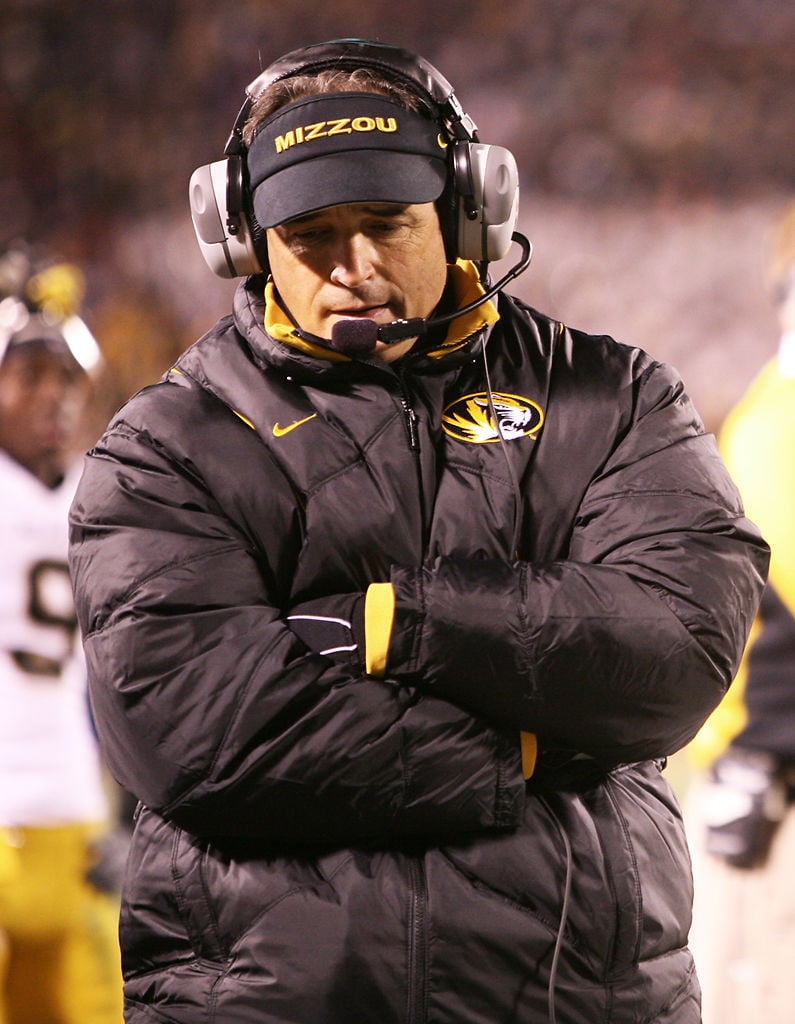 Missouri coach Gary Pinkel paces the sideline during a Nov. 24, 2007, game between the No. 4 Tigers and No. 2 Kansas at Arrowhead Stadium in Kansas City. Pinkel said coaches should prepare for the season to start on time until they’re told otherwise. 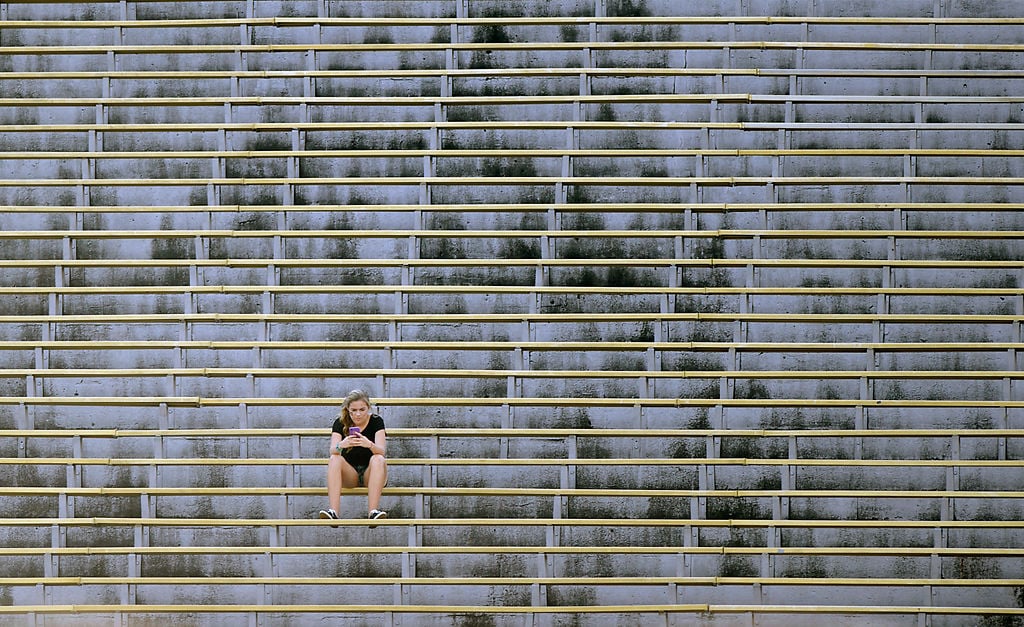 The Missouri football team huddles together at the beginning of a March practice at Memorial Stadium. If Missouri plays football at all in the fall, there’s a good chance it will play in empty stadiums due to COVID-19.

Missouri coach Gary Pinkel paces the sideline during a Nov. 24, 2007, game between the No. 4 Tigers and No. 2 Kansas at Arrowhead Stadium in Kansas City. Pinkel said coaches should prepare for the season to start on time until they’re told otherwise.

“I’ll be shocked if we have NFL football this fall, if we have college football,” Herbstreit said on ESPN Radio. “I’ll be so surprised if that happens.”

He was referring, of course, to the effect COVID-19 might have on the gridiron, given that the pandemic has already brought much of the sports world, including basketball, baseball and international soccer, to a halt.

Herbstreit is a co-host of “College GameDay” and provides color commentary on ESPN, which airs more college football games than any other network. Naturally, when a commentator of Herbstreit’s status makes a comment like that, others in college football take notice.

“No offense to Mr. Herbstreit, but deciding who’s going to win a football game on College GameDay is a lot different than getting the world in a panic about whether or not we’re going to play a college football season,” Missouri head football coach Eliah Drinkwitz said on an April 1 Zoom call with reporters.

Drinkwitz later apologized to Herbstreit on “The Paul Finebaum Show,” but he isn’t the only coach to respond to Herbstreit’s comments.

“I heard Kirk Herbstreit come out last week and say, ‘No way.’ Kirk does not know what he’s talking about,” Notre Dame head coach Brian Kelly said during a local radio appearance. “Really? For him, you know, (to) talk in those terms, he’s not a scientist. He’s a college football analyst. We’ll let the scientists determine those things.”

Kelly is right, in principle. Herbstreit is not a scientist. But epidemiologists’ projections seem to be more in line with Herbstreit’s take than, say, Clemson head coach Dabo Swinney’s opinion. Swinney said April 3 that he had “zero doubt” the college football season would start on schedule.

With national social distancing guidelines in effect until at least the end of April, and spring football effectively canceled, there are many obstacles that could prevent the college football season from beginning on time, or even from happening at all.

Chief among those obstacles is something Herbstreit alluded to in his comments: the fact that there is not yet a vaccine for COVID-19.

Jonathan Mayer, an infectious disease epidemiologist at the University of Washington, said mass gatherings would not be wise before a vaccine is available.

“We’re going to have to have a vaccine that’s effective and widely distributed and medications that can treat the more extreme cases and/or herd immunity where enough people have come into contact with the virus and survived it so that they become immune,” Mayer said. “Anything before that in terms of mass gatherings is just going to result in more virus transmission and a real risk of returning to the state that that we’re in now.”

Right now, it is too early to know if a herd immunity is beginning to develop, and a vaccine is not exactly right around the corner.

“A year and a half is kind of the earliest that I can foresee a time when there’s one that’s out that proves to be reliable,” Mayer said.

The World Health Organization defines a mass gathering as an event where the “number of people attending is sufficient to strain the planning and response resources of the community, city, or nation hosting the event.”

The definition doesn’t give a specific number, but football requires a lot of people, many of whom are in close proximity with one another on the field. Even if the games are played in empty stadiums, the total number of personnel involved with two different teams is well over 100 people.

Zachary Binney, who has a doctorate in epidemiology, suggested a plan of that nature is not necessarily foolproof.

“If you’re sequestering (players) in hotels, a really important question is support staff for the hotels. Are they quarantining and sequestering along with the league?” Binney said, regarding Major League Baseball’s proposal to play in empty stadiums in Florida and Arizona. “Because if not, then you don’t have what we might call a closed system. You have ways for the infection to get in. So it’s really quite complicated. And I’m not saying that it can’t be done. But that it’s not as easy as I think a lot of people think to really do responsibly.”

MLB’s proposal might work with 30 teams that are limiting travel, but college football is a sport with hundreds of teams spread across the country, making a plan like that even more difficult.

Some local governments have already begun to suggest that sports might not resume anytime soon. Los Angeles Mayor Eric Garcetti said Wednesday that he believes there likely won’t be sports in the city until 2021. Los Angeles is home to two NFL teams, University of California, Los Angeles and the University of Southern California, two of the most storied programs in college football.

The reality of the situation is that when everything eventually begins to reopen, football will not be the first to return. Both Mayer and Binney say reopening will need to be a gradual process that isn’t done too quickly.

“The hard truth is we don’t know exactly when things can be back to normal and they won’t be 100% back to normal until we get a good reliable mass-distributed and mass-administered vaccine,” Binney said.

With college football scheduled to start in late August, another hurdle stands in the way of the upcoming season: a lack of preparation time.

In a normal year, spring football would be finishing up right about now. Missouri, for example, was to have held its spring game last Saturday. Spring practices are a chance for coaches to get players back into camp and introduce freshmen to the system.

Technology makes it easier for coaches to send workouts for players to do at home. Team meetings can also be held over Zoom or FaceTime, making it easier for the team to stay connected while practicing social distancing. But it also comes with a drawback.

“You can send them workouts, but you can’t hold them accountable for those workouts,” former Missouri head coach Gary Pinkel said.

One coach who was eager to get back into spring football is Oklahoma State’s Mike Gundy, whose comments regarding the pandemic sparked controversy.

“We’ve got to get these guys back in here,” Gundy said on a conference call. “ ... From what I read, the healthy people can fight this … They’re doing some blood transplants now with the people that have already gotten the disease, that have gotten over it that have the antibodies that can fight it. There’s a lot of people who can figure this out. May 1’s our goal.”

Gundy’s misinformed comments were not backed up by scientists or Oklahoma State’s athletic department, which called the May 1 goal unrealistic.

Part of Gundy’s comments perpetuated a misconception that younger people won’t be affected by the disease.

“… The majority of people in this building who are healthy, and certainly the 18-, 19-, 20-, 21-, 22-year-olds that are healthy, the so-called medical people saying the herd of healthy people that have the antibodies maybe built up and can fight this,” Gundy said.

It is true that younger people without underlying medical conditions are less likely to die from COVID-19, but that isn’t a justification to have players risk their safety to get back to football.

“Imagine I walked you down to the sideline of a football field, and I said you have to sprint straight across the football field, anywhere you want goal line to goal line, but three inches of the field is covered in landmines,” Binney said. “That’s a 0.1% chance of death. You don’t take one in 1,000 risks where the downside is mortality every day. And I don’t think there’s any coach in the world, including coach Gundy, who would send their players out to run a drill like that. Right? That’s crazy. So to say, ‘just let them get it and they’ll be fine.’ 99.9% is not 100%.”

It’s difficult to think about the potential of not having a football season, especially when one’s job is coaching football. Missouri’s former coach can attest to that.

“We (football coaches) all want control of everything,” Pinkel joked.

With pretty much everything involving COVID-19 out of the control of coaches, Pinkel advised preparation anyway, just in case the season can start on time.

Whether there is football or not, there is a pandemic and people’s lives are at risk. Pinkel believes player safety is a top priority, and he knows there are bigger things going on. In addition to his advice for coaches, he had advice for everyone else.

“Wake up every day and appreciate where you live,” Pinkel said. “And wash your hands.”

Doctor: Eriksen 'was gone' before being resuscitated

In scary scene at Euro 2020, Eriksen collapses on the field