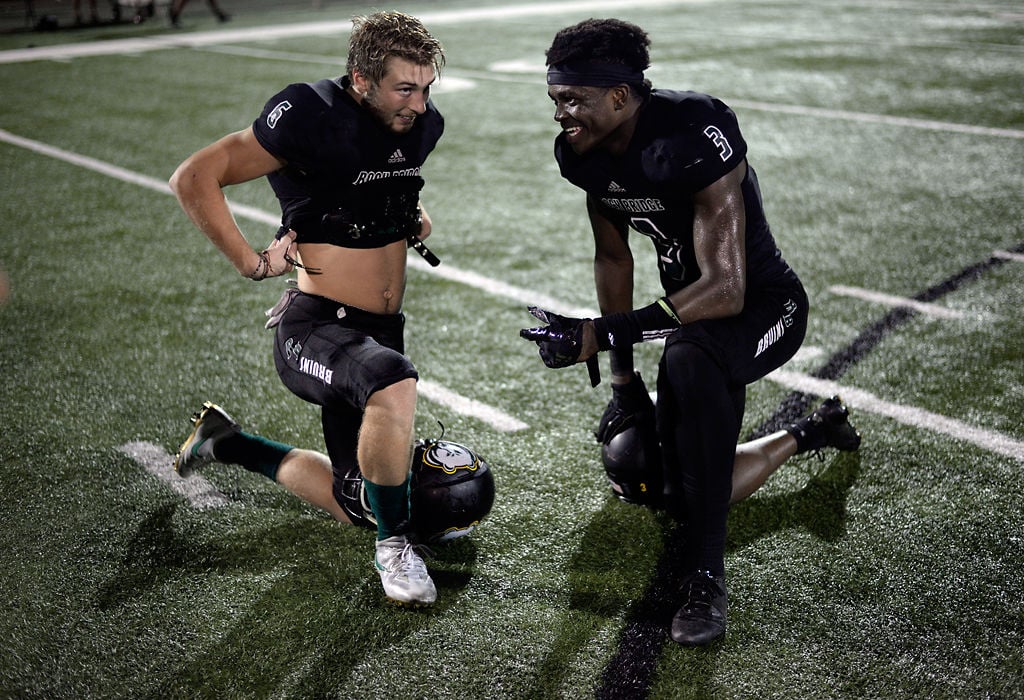 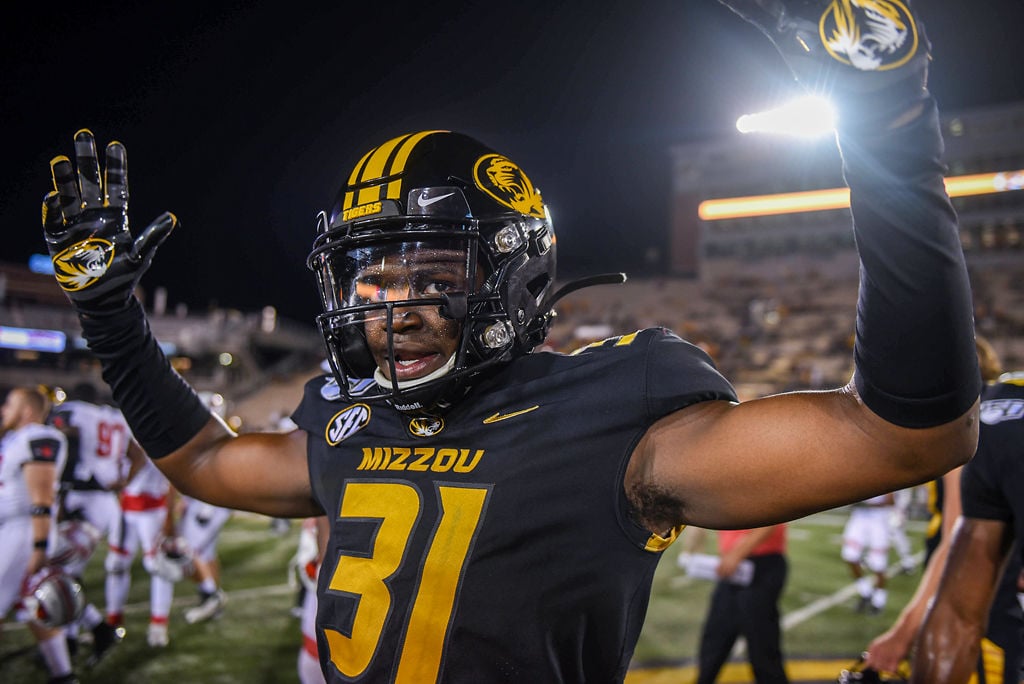 Missouri defensive back Martez Manuel raises his hands in elation after the Missouri defeated Southeast Missouri State on Sept. 14 at Memorial Stadium. Manuel helped organize the march the football team and members of Columbia and MU Police held Wednesday. 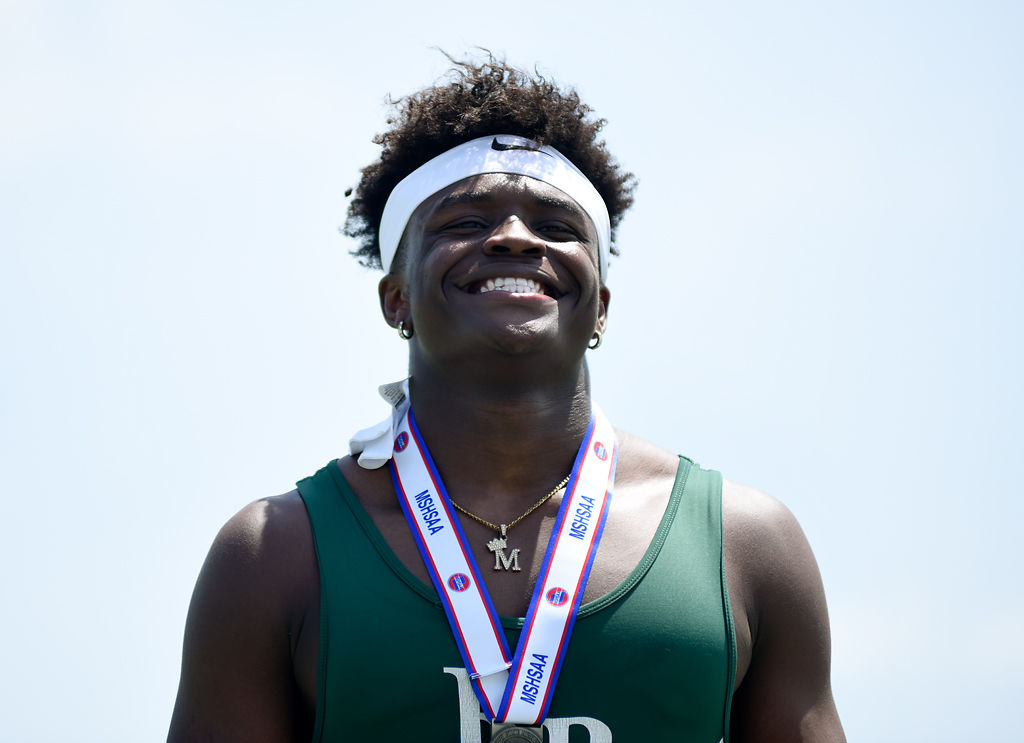 Rock Bridge’s Martez Manuel lights up with joy on top the podium after placing first in the boys 110-meter hurdles final at the Class 5 state championships May 25, 2019, at Battle High School. Rock Bridge boys placed third as a team. Manuel helped organize the march the Missouri football team and members of Columbia and MU Police held Wednesday. 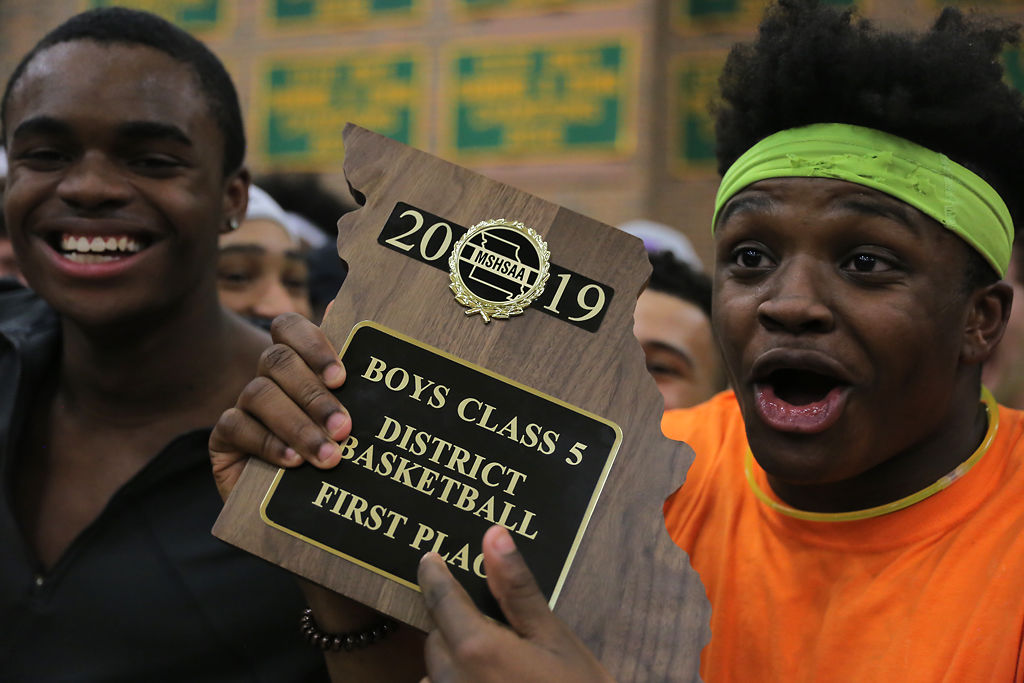 Missouri defensive back Martez Manuel raises his hands in elation after the Missouri defeated Southeast Missouri State on Sept. 14 at Memorial Stadium. Manuel helped organize the march the football team and members of Columbia and MU Police held Wednesday.

Rock Bridge’s Martez Manuel lights up with joy on top the podium after placing first in the boys 110-meter hurdles final at the Class 5 state championships May 25, 2019, at Battle High School. Rock Bridge boys placed third as a team. Manuel helped organize the march the Missouri football team and members of Columbia and MU Police held Wednesday.

After attending a protest with some of his coaches and teammates in Jefferson City earlier in the week, Manuel wanted to do something in his hometown of Columbia. The Rock Bridge High School graduate approached Eliah Drinkwitz and Ryan Walters with an idea that he hoped might bring the team closer together.

“None of my coaches, even though they’re fairly new to me, have ever given me a vibe that I could be uncomfortable coming to them with anything,” Manuel said. “The way I was brought up, I’ve always been taught to voice my opinion and voice the way that I think things should be. That’s something that lit a fire in me.”

After an early Wednesday afternoon team meeting on Zoom when the coaches welcomed players to join the march, an estimated 100 people, including members of the MU Police and Columbia Police departments, coaches, administration and players, met at the columns on campus and headed north up Eighth Street.

When they arrived outside the courthouse, they kneeled for 8 minutes and 46 seconds, the length of time that a Minneapolis police officer pinned his knee against George Floyd’s neck, resulting in his death.

“It was a really powerful moment for me personally and I believe it was a powerful moment for our team for unity and cohesion and to stand up for what is right,” Drinkwitz said Thursday. “This was a clear instance of right vs. wrong. We tell our players that when something is wrong, stand up against it.”

The team decided that words or a statement alone was not enough. So at the courthouse, more than 50 players registered to vote, including Manuel.

“Just seeing all my teammates register to vote, something that if we didn’t do then, we probably never would’ve done this year,” Manuel said. “The youth isn’t active in politics, active in voting. Anyone can be a keyboard warrior and anyone can post some things on Instagram, but I’m big on voicing my power and voicing my concerns for that subject.”

At Rock Bridge, a predominantly white high school, Manuel was sometimes the only black kid in his classes, he said, and it was difficult to discuss issues involving race. During his sophomore year of high school, Manuel said political differences tore the football team apart. After going 2-8 that season, Manuel, teammate Nathaniel Peat (now at Stanford) and three seniors met once a week over the summer to discuss change.

That next season, Rock Bridge went 9-1.

“Once your team is truly all one, that makes you even that much more powerful,” Manuel said. “Me living through that, knowing how big that is, there was no way I was going to stand by and possibly let that happen again in college. I wanted to show our players that our coaches are with us, our school is with us, our white teammates are with us.”

Manuel recognizes that as a sophomore, he isn’t yet a leader like junior linebacker Nick Bolton is. But he says that beyond his success on the field this year, he wants to gain the respect and trust from each of his teammates and coaches.

“I’m extremely proud of Martez for making a stand, trying to have a voice and do something in his own community,” senior defensive end Chris Turner said. “I’m proud of him for wanting to make a change here and starting here. That event really made a statement for us as a team. It brought everybody together. It made us a way tighter unit and showed the guys have respect for each other.”

Neither Bolton nor Manuel expected the turnout or impact that the march had. But it showed that their platform as college athletes has the ability to create unity.

“At the end of the day, football is great and all, but it’s just football,” Manuel said. “There’s a lot more reckless stuff that happens in society and that’s going to happen in the world than (what) our record was.”

A long summer of basketball isn't new for everyone in NBA

Royals hope youthful flexibility a plus during unique season