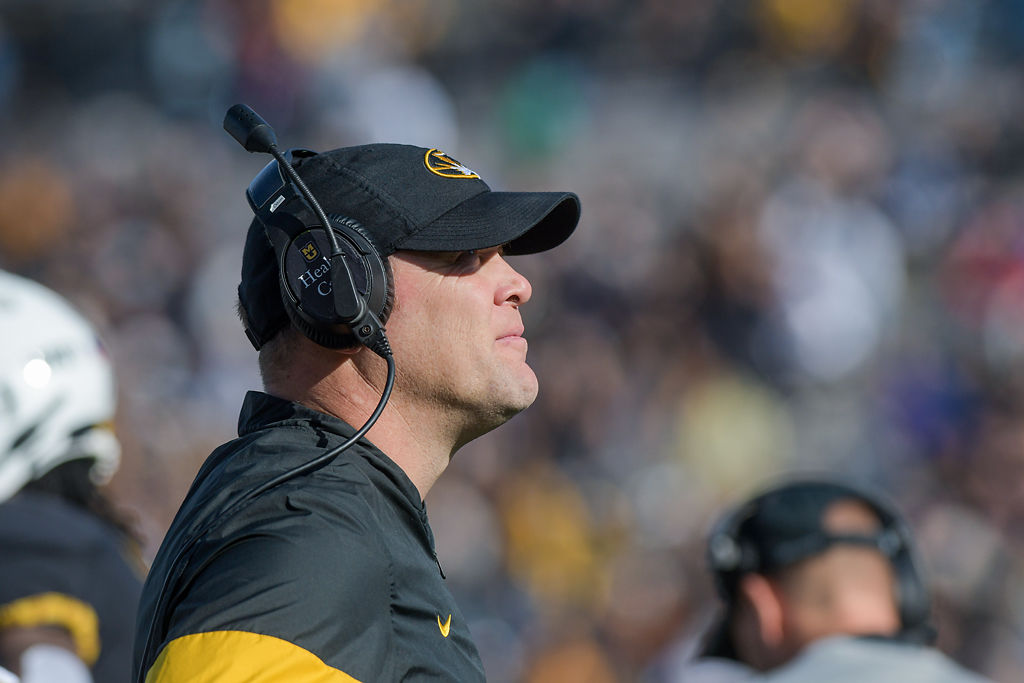 Missouri head coach Barry Odom looks to the field during the fourth quarter as Missouri takes on Florida on Nov. 16 on Faurot Field. Odom was fired Saturday morning at the end of the Tigers’ 6-6 season. 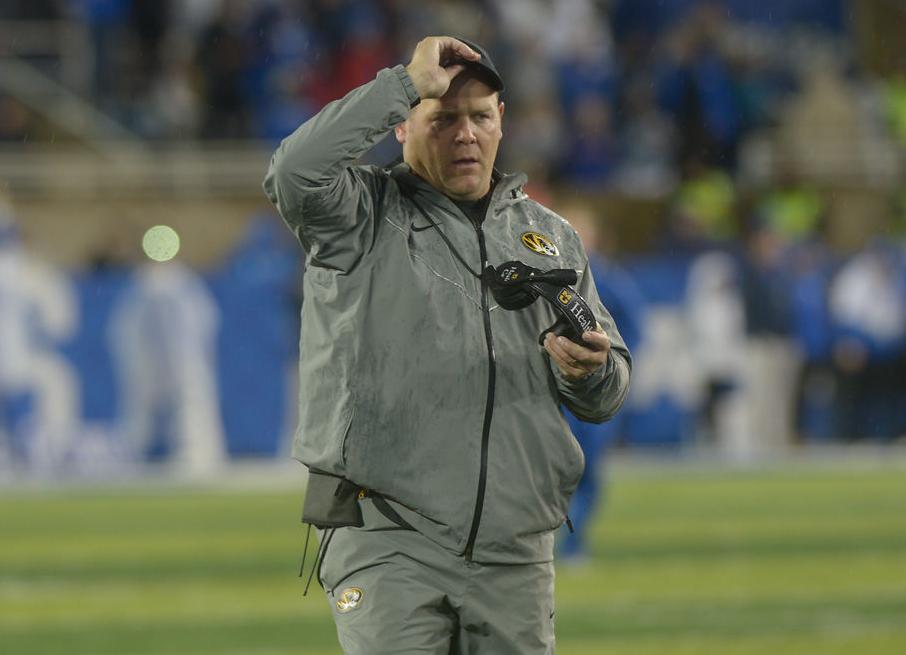 Missouri head coach Barry Odom looks to the field during the fourth quarter as Missouri takes on Florida on Nov. 16 on Faurot Field. Odom was fired Saturday morning at the end of the Tigers’ 6-6 season.

One year after signing him to a three-year contract extension through 2024, Missouri fired its football coach, Barry Odom, on Saturday following a tumultuous fourth season that ended Friday with a record of 6-6, a record that seemed unimaginable before the season or even in mid-October.

Way back then, the Tigers were 5-1 and positioned in first place in the SEC East. A cringe-worthy season-opening loss to Wyoming seemed far behind them. But Missouri self-destructed in the second half of the season. The 6-6 record is the program’s first win-loss regression from year to year in the Odom era (2016-19). In his four seasons, MU finished 4-8, 7-6, 8-5 and 6-6.

Athletic director Jim Sterk met with Odom and fired him Saturday morning after a 24-14 win against Arkansas (2-10, 0-8 SEC) in Little Rock on Friday afternoon. That win ended a five-game losing streak, but it wasn’t enough to save Odom’s job after a miserable second half of the season that even marked Missouri as the only SEC team to lose to Vanderbilt (3-9, 1-7).

“As a program, we had tremendous momentum heading into 2019 with the opening of our South End Zone project, as well as other strategic investments into the program,” Sterk said Saturday during a press conference. “We lost a great deal of energy over the last half of the season, which causes great concern as we look to the future.

“I felt we lost momentum of the program and that it would be difficult for us under (Odom’s) leadership to continue to move it forward.”

Odom did not return calls from the Missourian on Saturday.

A national search for Missouri’s next head football coach will begin immediately, Sterk said, and he hopes the school can have its decision as soon as two weeks from now. But the athletic director added he will not be commenting publicly on the search. He said head coaching experience is “not an absolute criteria but something that would be very helpful.”

Asked whether he will look for an offense-minded coach to replace Odom, whose background is in defense, Sterk said: “I think it depends on the candidate. Obviously, people get excited about scoring a lot of points.”

One of the pre-2019 “strategic investments in the program” Sterk alluded to Saturday was the contract extension for Odom before this season. Under its terms, Odom’s total buyout is $2.85 million. MU owes him $450,000 (his base salary) for each of the five years left on his contract, plus $150,000 for every year he was the head coach as part of his annuity fund. The buyout will be offset by Odom’s salary in his next job. His guaranteed annual salary at MU under the new contract was $3.05 million.

The future of Missouri’s assistant coaches remains uncertain, but if they leave, MU will also owe them buyouts. The 10 assistant coaches had salaries totaling $4,729,500 for the 2019 season. Offensive coordinator Derek Dooley is the highest paid of the group ($925,000). Sterk suspects there won’t be a high buyout total for Odom’s staff because most will either be retained by the next head coach or hired elsewhere.

Missouri was 25-25 in Odom’s tenure. A former Missouri linebacker from 1996-99, he was Gary Pinkel’s successor as head coach after Pinkel hired him as MU’s defensive coordinator in 2015. Odom led the program to two bowl games but lost in both: the 2017 Texas Bowl and the 2018 Liberty Bowl. The Tigers would be bowl eligible for a third straight season right now if the NCAA had not denied the university’s appeal on a one-year postseason ban Tuesday.

Odom’s biggest win was in 2018, when the Tigers upset No. 11 Florida 38-17 on the road. Among his worst losses were the 21-14 shocker at Vanderbilt that kicked off this year’s skid, a 51-45 homecoming dud against Middle Tennessee State in his first season, this year’s 37-31 opener at Wyoming, and a 35-3 embarrassment at home against Purdue in 2017.

Sterk also acknowledged Saturday that Missouri’s ticket sales have fallen since the Pinkel era (though they increased between 2018 and this year), which was a factor in the decision to fire Odom but not the most important one.

Odom’s departure from the program cost the Tigers a recruit almost immediately. Saturday afternoon, Robert Wooten, a 3-star defensive end from Texas, tweeted that he will reconsider his commitment to play at Missouri “due to coaching changes.” He said in the tweet that “I loved Coach Odom and everything he was about.”

Missouri players took to Twitter on Saturday after Odom was fired. Senior linebacker Cale Garrett, part of Odom’s first recruiting class, tweeted: “@Coach_Odom thank you for everything you’ve done for a program and for myself. Without you, I would have never had the opportunity to play in a Mizzou uniform. You have had a tremendous impact on my life well beyond football.”

The Odom era will be most remembered for former quarterback Drew Lock, a four-year starter (2015-18) who broke an SEC single-season record in 2017 with 44 passing touchdowns. Lock was considered one of the most talented draft prospects at quarterback in his class, and he now plays for the Denver Broncos.

But Missouri could never quite capitalize on that talent. Odom got the team better in each year with Lock, but the final records never seemed to reflect the preseason potential. In 2018, the Tigers were a couple of plays from finishing the regular season 10-2, but they lost on a last-second field goal to South Carolina and a last-second touchdown to Kentucky. MU blew double-digit leads in both games.

In 2019, Odom landed arguably the program’s biggest commitment in years from Kelly Bryant, a graduate transfer quarterback from national champion Clemson. Some speculated Missouri could be 8-0 going into its game against Georgia this season. But even with a capable successor to Lock, Odom’s Tigers did not live up to expectations. Sterk was adamant Saturday that MU should shoot high in its coaching search.

“Missouri has the resources to be top 25 consistently and in the postseason to compete for championships,” Sterk said. “Coach Pinkel showed that in a couple times. He went to the championship game in the SEC.”

Odom’s teams had a tendency to grow into seasons. They became great at rebounding from slow starts. In 2017, Odom went on a memorable postgame rant defending his job security after Missouri lost 51-14 to Auburn. The Tigers started 1-5 but won their last six regular season games that year. In 2018, they were 4-4 then won their last four.

It was just the opposite in 2019: promising start, face-plant finish.

Losing close games doomed Odom, becoming his most negative legacy. Missouri was 4-9 in one-possession games in four seasons under Odom, including a memorable heartbreaker in his first season. The Tigers nearly upset Georgia at Faurot Field, but a fourth-and-10 conversion saved the Bulldogs and J’Mon Moore’s open-field fumble cemented the loss.

Then there was the end of the Lock era, when Missouri nearly rallied in the fourth quarter against Oklahoma State in the Liberty Bowl on Dec. 31 last year. But Lock came up short scrambling on a red-zone fourth-and-1 in the last minute. Missouri lost, 38-33.

The image of Lock on the ground with his arm outstretched toward the first-down marker is etched in Missouri football history. The moment left a bitter taste in Missouri fans’ mouths, a taste replicated time and time again in the 2019 slide that doomed a coach. The last token of the Barry Odom era.

The Missourian’s Camille McManus contributed to this report.

Soldier Field showdown is another Chicago chapter for Irish

Rodgers preps for 49ers, who asked about him before draft

Gator Chomp: Ledecky heads to Florida to work with Nesty