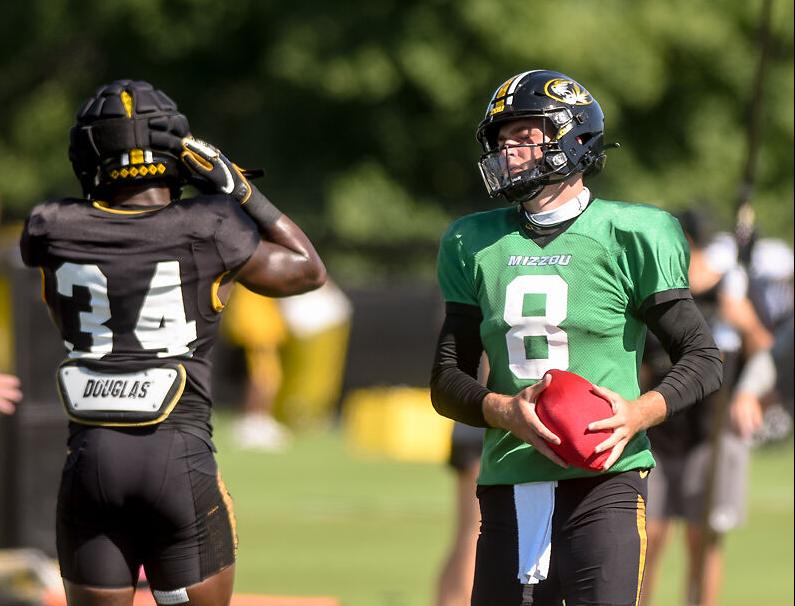 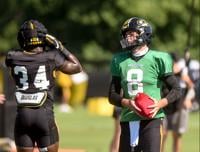 Connor Bazelak runs through a drill during practice Aug. 21 at the Missouri Athletic Training Complex. Bazelak is listed as one of the two probable starting quarterbacks on Tuesday’s depth chart. 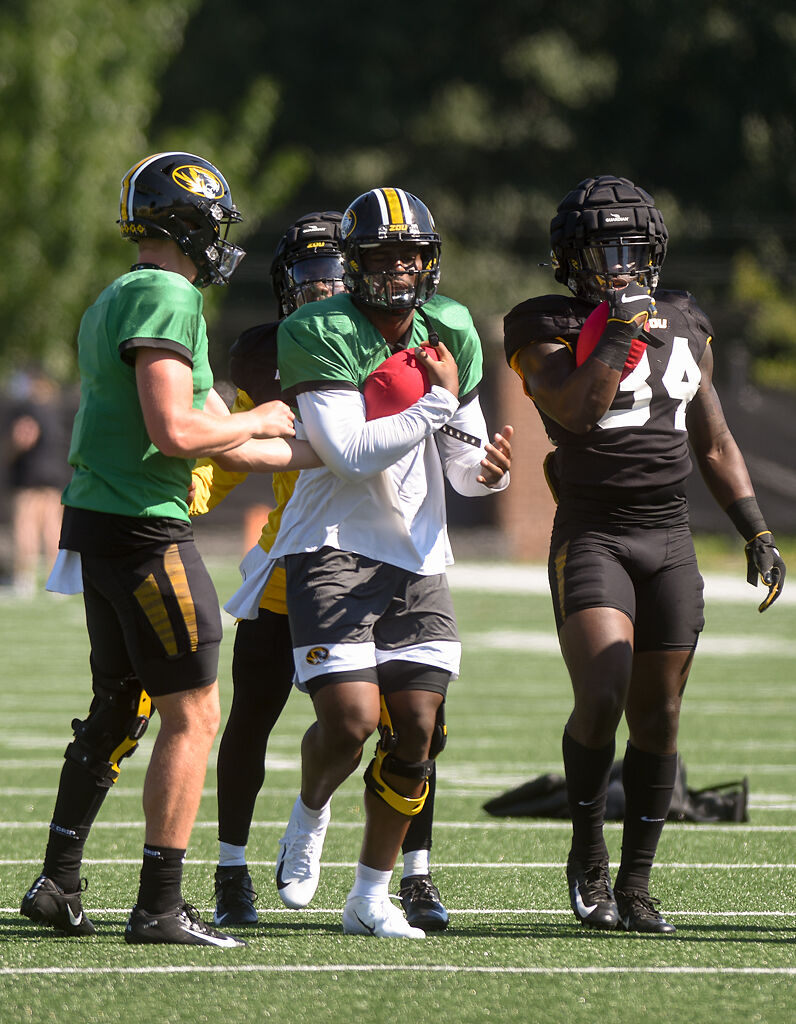 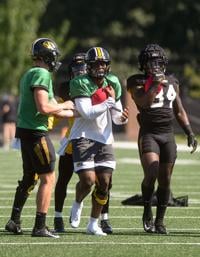 From left, Brady Cook, Shawn Robinson and Larry Rountree III work through a drill during their football practice Aug. 21 at the Missouri Athletic Training Complex. Robinson is a part of Missouri's two-man competition for the starting QB role.

Connor Bazelak runs through a drill during practice Aug. 21 at the Missouri Athletic Training Complex. Bazelak is listed as one of the two probable starting quarterbacks on Tuesday’s depth chart.

From left, Brady Cook, Shawn Robinson and Larry Rountree III work through a drill during their football practice Aug. 21 at the Missouri Athletic Training Complex. Robinson is a part of Missouri's two-man competition for the starting QB role.

Missouri’s preparation for its first game of the season Saturday is in full swing, but the team’s biggest preseason question — who will the starting quarterback be? — remains unanswered.

This was expected after coach Eliah Drinkwitz announced he wouldn’t name a starter until the season opener against Alabama on Saturday, but it’s unclear if either of the two separated themselves during fall camp. Drinkwitz, in a Zoom conference with reporters Tuesday, left open the possibility of both playing.

Drinkwitz said he’s considering the idea “a lot,” and when asked if seeing a combination of Robinson and Bazelak could be expected Saturday, he said, “I can’t manage your expectations.”

Some starters were unveiled on the opening depth chart, with three freshmen earning such roles.

Ennis Rakestraw Jr. was named a starter at cornerback ahead of senior Adam Sparks after impressing in his first fall camp. The freshman from Duncanville, Texas, became the crown jewel of Drinkwitz’s first recruiting class when he picked Missouri over Texas and Alabama on National Signing Day in February.

Freshman Harrison Mevis, an Under Armour All-American kicker, will replace Tucker McCann’s kicking duties, while graduate transfer Grant McKinniss will take over as the punter. Freshman receiver Kris Abrams-Draine will be the team’s punt returner.

Looking at the rest of the offense, experienced running backs Larry Rountree III and Tyler Badie will split carries at running back. Drinkwitz added that he hopes freshman Elijah Young will be able to get reps in Saturday’s game.

Graduate transfers Keke Chism and Damon Hazelton Jr. are listed as the starting outside receivers, with Jalen Knox in the slot. Four of the five offensive line positions have been decided, with a battle remaining at left tackle between Bobby Lawrence and Zeke Powell.

The winner of the battle will join Mike Maietti, Xavier Delgado and returning starters Larry Borom and Case Cook on the line.

Most of the defensive starters remained the same from last season, with a unit that returns a lot of experience, including preseason All-Southeastern Conference pick Nick Bolton.

Missouri now down to seven players out because of testing

Because of an inconclusive test, Missouri went from having a dozen players out because of positive COVID-19 tests and contact tracing to only being down seven, Drinkwitz said Tuesday.

“We contact-traced several players. Once that inconclusive test was retaken multiple times with a PCR swab and concluded to be a negative test, we were able to allow people to come back out of the contact-tracing (quarantine),” Drinkwitz said.

Missouri had no new positive tests after Sunday’s round of testing, and the team will be tested Wednesday and Friday before its game Saturday. Drinkwitz said the team plans on having 69 scholarship players for game day. That would put Missouri over the SEC threshold of 53 scholarship players. Missouri also has to maintain its status on other positional thresholds, the conference announced Friday.

“We’re dangerously close to every threshold, so, I mean, it is what it is,” Drinkwitz said. “But we’re not any closer today than we were in the past.”

Drinkwitz and the team have been releasing updated testing numbers, but that hasn’t been the case at all schools. Tennessee’s Jeremy Pruit, Oklahoma’s Lincoln Riley and Alabama’s Nick Saban have all kept their numbers under wraps for competitive reasons.

Drinkwitz said the pandemic was a public health issue and emphasized the importance of transparency.

“For me, what went into (the decision) was just honesty and the approach that the pandemic overrides competitive advantage,” he said.

Tight end Brendan Scales medically retired from the team, while defensive end Sci Martin Jr. will be out for “a couple of weeks” because of a knee injury.

Defensive end Trajan Jeffcoat was readmitted to the team despite missing most of the 2019 season after the team announced in October that he was no longer enrolled at the university.