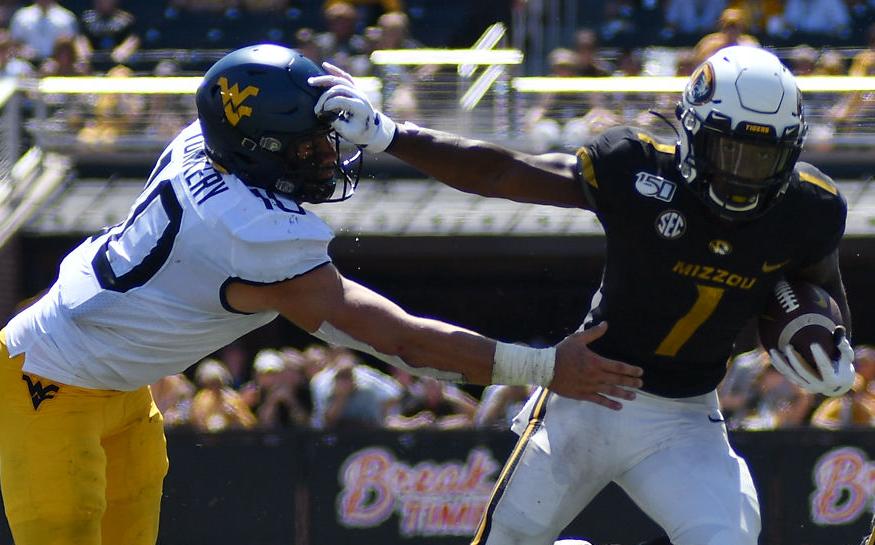 Missouri running back Tyler Badie fends off West Virginia linebacker Dylan Tonkery during the second half of the Tigers’ home opener on Saturday on Faurot Field. Badie gained 73 yards on 12 carries and had three receptions in Missouri’s 38-7 win over West Virginia. 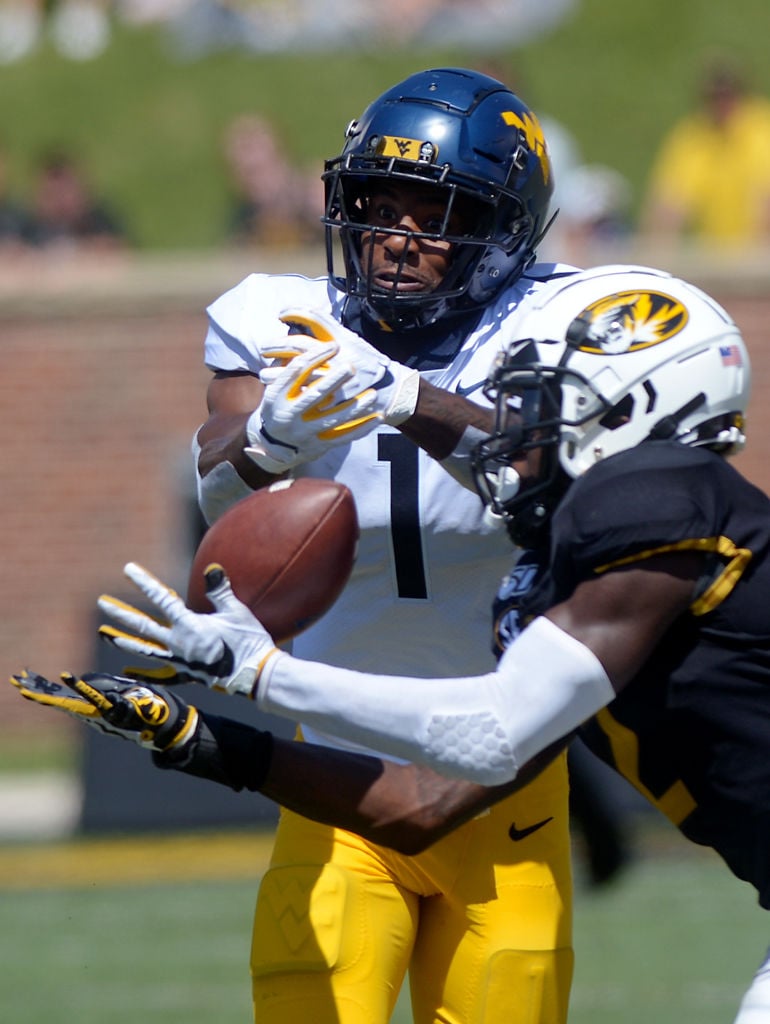 Missouri defensive back DeMarkus Acy breaks up a pass intended for West Virginia wide receiver T.J. Simmons during the second half of the game on Saturday on Faurot Field. 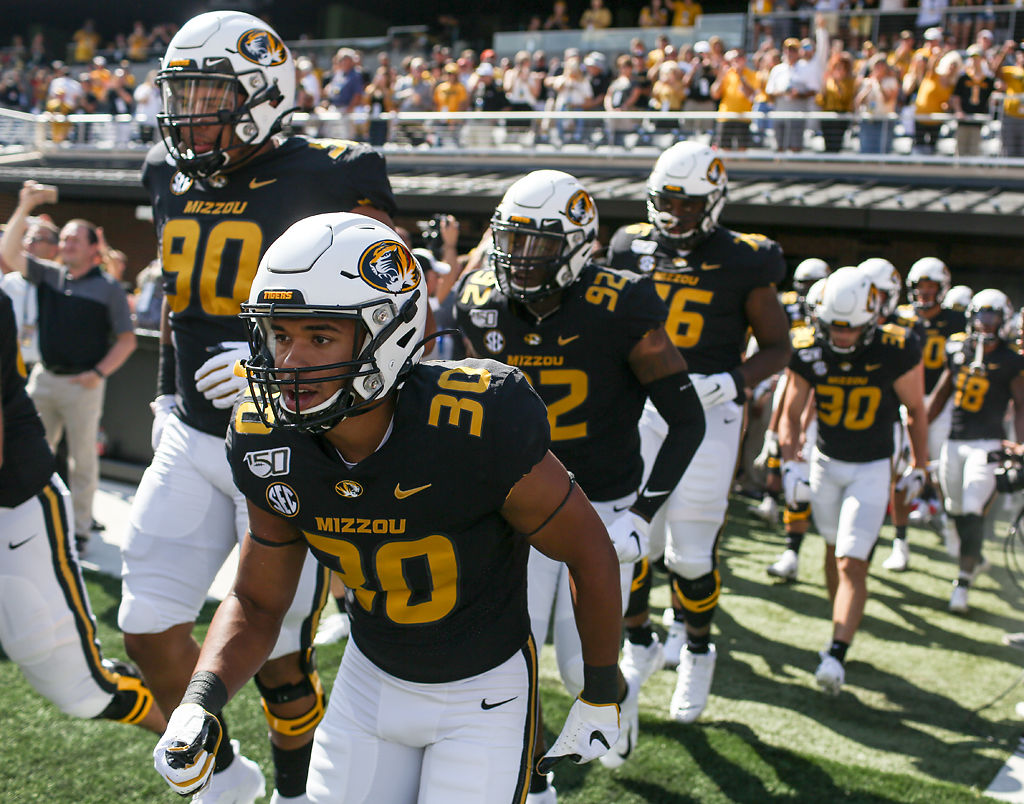 Missouri DB Zion Sales, No. 30, runs out of the south end zone locker room with his teammates before the University of Missouri takes on the West Virginia Mountaineers on Faurot Field at Memorial Stadium on Saturday.

Missouri running back Tyler Badie fends off West Virginia linebacker Dylan Tonkery during the second half of the Tigers’ home opener on Saturday on Faurot Field. Badie gained 73 yards on 12 carries and had three receptions in Missouri’s 38-7 win over West Virginia.

Missouri defensive back DeMarkus Acy breaks up a pass intended for West Virginia wide receiver T.J. Simmons during the second half of the game on Saturday on Faurot Field.

Missouri DB Zion Sales, No. 30, runs out of the south end zone locker room with his teammates before the University of Missouri takes on the West Virginia Mountaineers on Faurot Field at Memorial Stadium on Saturday.

The first time it was handed out, the equation on the pseudo-business card was meant as encouragement. The second time, especially after last week, it demanded a sense of urgency from Missouri’s players, too.

In its 2019 season opener a week ago, MU football lost the turnover battle 3-0 to Wyoming. MU lost the game, too, 37-31. Coincidence? Head coach Barry Odom thought not. So the coaching staff printed those cheesy little cards for players to carry around in their wallets all week. In practice, if defenders missed what was deemed a should-be interception, they had to do push-ups. Then Friday night before taking on West Virginia, the coaches handed out the same card again. The message became Missouri football’s Big Brother, staring at players everywhere they went, every moment of the day and night.

“You’re looking for something in your pocket, you pull it out,” defensive end Chris Turner said. “It’s constantly on your mind.”

Missouri took the message to heart in a 38-7 victory over West Virginia in Saturday’s home opener. In an all-around defensive turnaround, the Tigers (1-1) won the turnover battle 3-0 this time, and they turned those three takeaways into 21 points that spearheaded a spirited bounce-back win after the Week 1 stunner.

“We’re not going to be defined by one game,” Odom said. “Just like we’re not defined by this game. We’re defined by how we respond in every opportunity we get.”

No one responded better than the defense, particularly the linebackers. The Tigers allowed 297 rushing yards to Wyoming last week, only making two tackles for loss and zero sacks. This time, West Virginia had negative yardage on the ground into the fourth quarter, and finished with 30 yards on 32 carries. Missouri tallied a resounding 13 tackles for loss and three sacks.

Odom said the biggest improvement in the run defense was preventing open-field big gains, which starts with the positioning of Cale Garrett and Nick Bolton, the linebackers. Bolton led the team in tackles with 10 and Garrett was right behind him with seven.

“We were in the backfield a lot today,” Garrett said, “which is something that usually works out for the defense.”

The sophomore Bolton, making just his second college start, became the first MU player since Sean Weatherspoon in 2008 to have two interceptions in a game and return one of them for a touchdown.

“I think I’ve got the best hands on the defense,” Bolton said, smirking.

“We were trying to throw the ball down the field because you feel the game slipping away from you,” West Virginia coach Neal Brown said.

The Mountaineers took several downfield shots on their first series and couldn’t connect, which Odom said set the tone. MU was preparing to see “six to 10” deep shots.

Kendall’s counterpart, the Tigers’ Kelly Bryant, threw for 150 yards and three touchdowns, including two to tight end Albert Okwuegbunam. Bryant was 17-for-25 and didn’t throw an interception after turning the ball over twice last week. He went to the locker room early after becoming overheated, but doesn’t have any sort of serious injury, Odom said.

The Tigers did all of their scoring on offense in the first half. After the teams traded punts to start the game, Missouri slowly picked up steam through the first quarter. Tucker McCann kicked a 44-yard field goal to start the scoring with 8:34 left in the first.

Then the Tiger tip drill began.

Kendall and West Virginia were driving at the MU 32-yard line, but an off-line throw was tipped by a receiver, bobbled multiple times and finally intercepted by Bolton at the 25. Bolton was in outside leverage man coverage, forcing his man inside, and the throw was a little too far outside — right into the linebacker’s lap.

“It kind of surprised me what the ball did,” Bolton said. “It hit the splint I had on my arm, but luckily I caught it the second time.”

Missouri turned that into a scoring drive capped by a beautiful Bryant-to-Okwuegbunam 26-yard touchdown pass. Okwuegbunam made the grab in coverage at the 1-yard line, then tapped his toe in the end zone before falling out of bounds, giving the Tigers a 10-0 lead after the first quarter. They have outscored their 2019 opponents 24-0 in the opening frame.

But unlike last week, when they were pummeled 27-3 in the second quarter, the Tigers kept piling on.

West Virginia was moving the ball again until Garrett barely got his finger on a pass over the middle, just enough to redirect it for a Perkins interception. Missouri’s offense made the most of it, driving for another touchdown on a 16-yard pass to Okwuegbunam again.

Odom praised defensive coordinator Ryan Walters for his play-calling on all three interceptions: “By formation, by personnel, by alignment, by situation on the field. He had a great understanding of what was coming and called it on the headsets. It was awesome.”

Garrett, who led Missouri in tackles last week but was hard on himself afterward for some costly missed tackles, made several crucial plays in a rebound game: the tipped pass, for one, and two tackles for loss. One of those was a third-down sack in the second quarter that pushed West Virginia back and led to a missed field goal.

Kobie Whiteside and Turner accounted for Missouri’s other two sacks. Turner is a returning starter at defensive end, but he hadn’t recorded a sack in over 11 games.

“It’s the best feeling in football,” Turner said. “It’s been a while since I had the feeling.”

The Tigers led 31-0 at halftime after Barrett Banister scored his first career touchdown. They added to that score on Bolton’s 20-yard pick-six in the fourth quarter.

“I was reading the quarterback,” Bolton said. “I saw him look to his left and just undercut the route on that one.”

“He grew up today,” cornerback DeMarkus Acy said about Bolton.

West Virginia, which finished with just 171 total yards, got free for one late touchdown, but all that was at stake at that point was Missouri surrendering its shutout. After the Wyoming game, it would have been an emphatic exclamation point.

“We all wanted a shutout,” Bolton said. “We wanted to prove a point after last week.”

'My mission was to win': Coco tops Venus at Australian Open