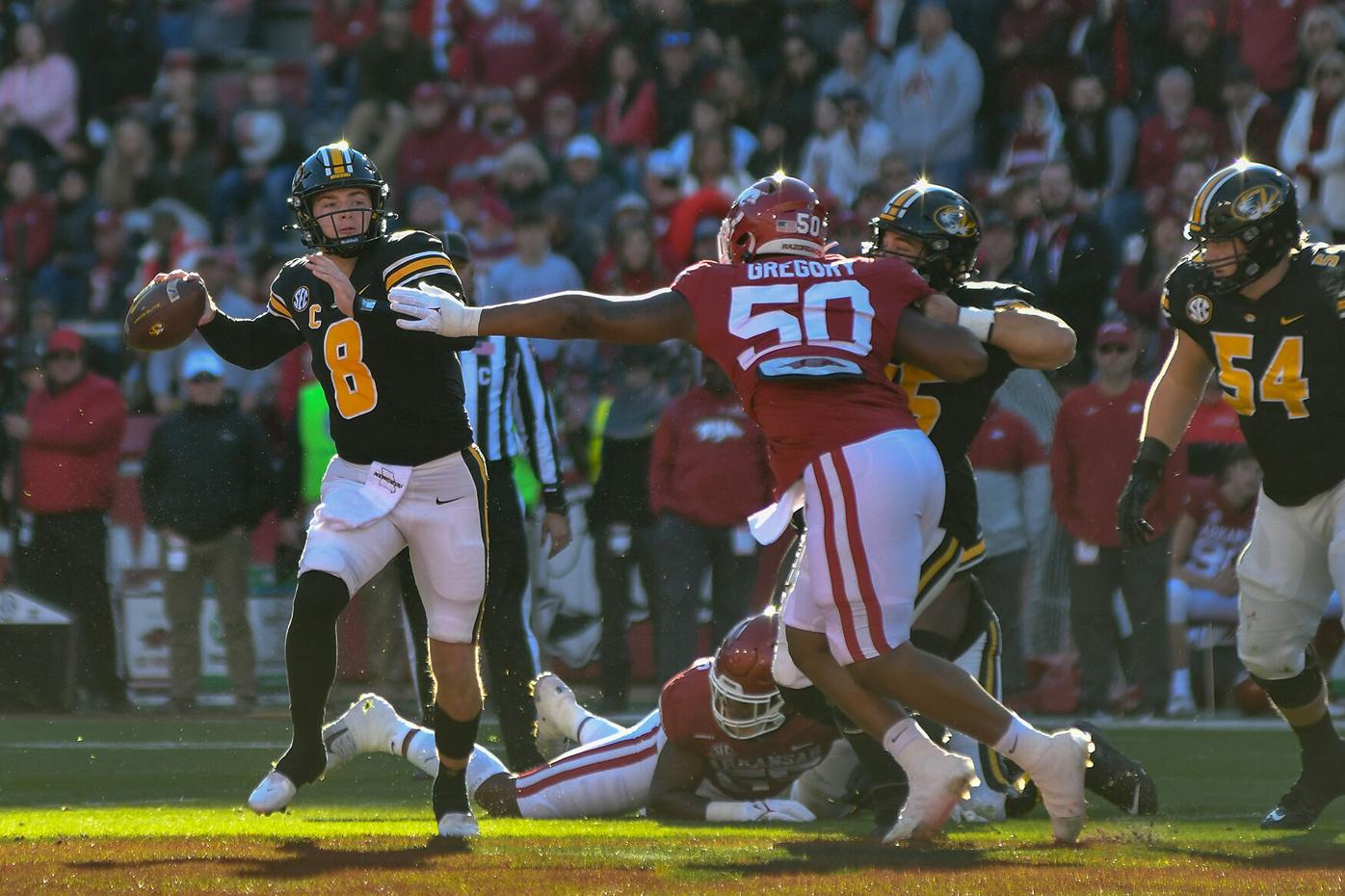 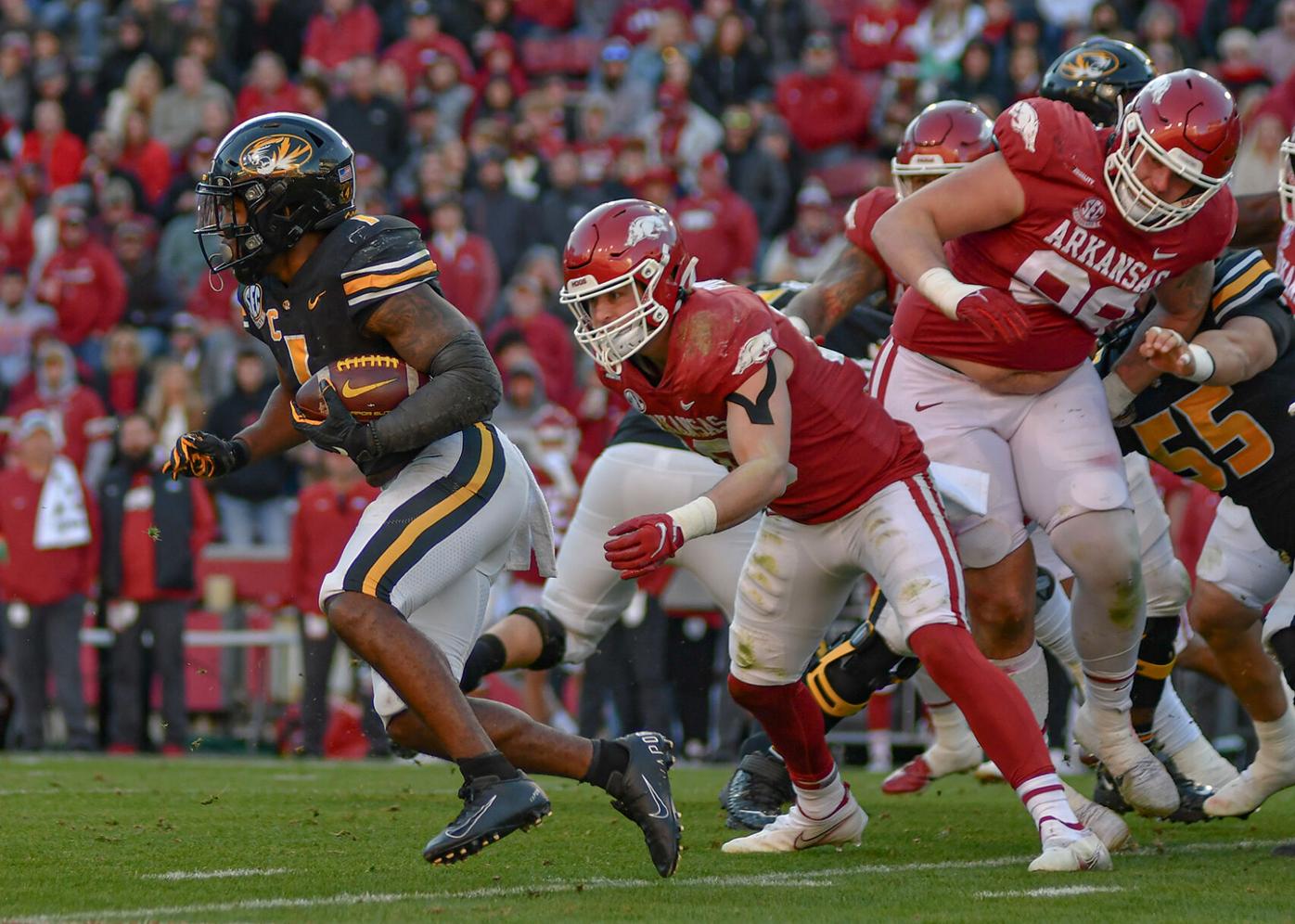 Tyler Badie runs with the ball Friday at Donald W. Reynolds Razorback Stadium in Fayetteville, Ark. Badie rushed for 219 yards in the loss. 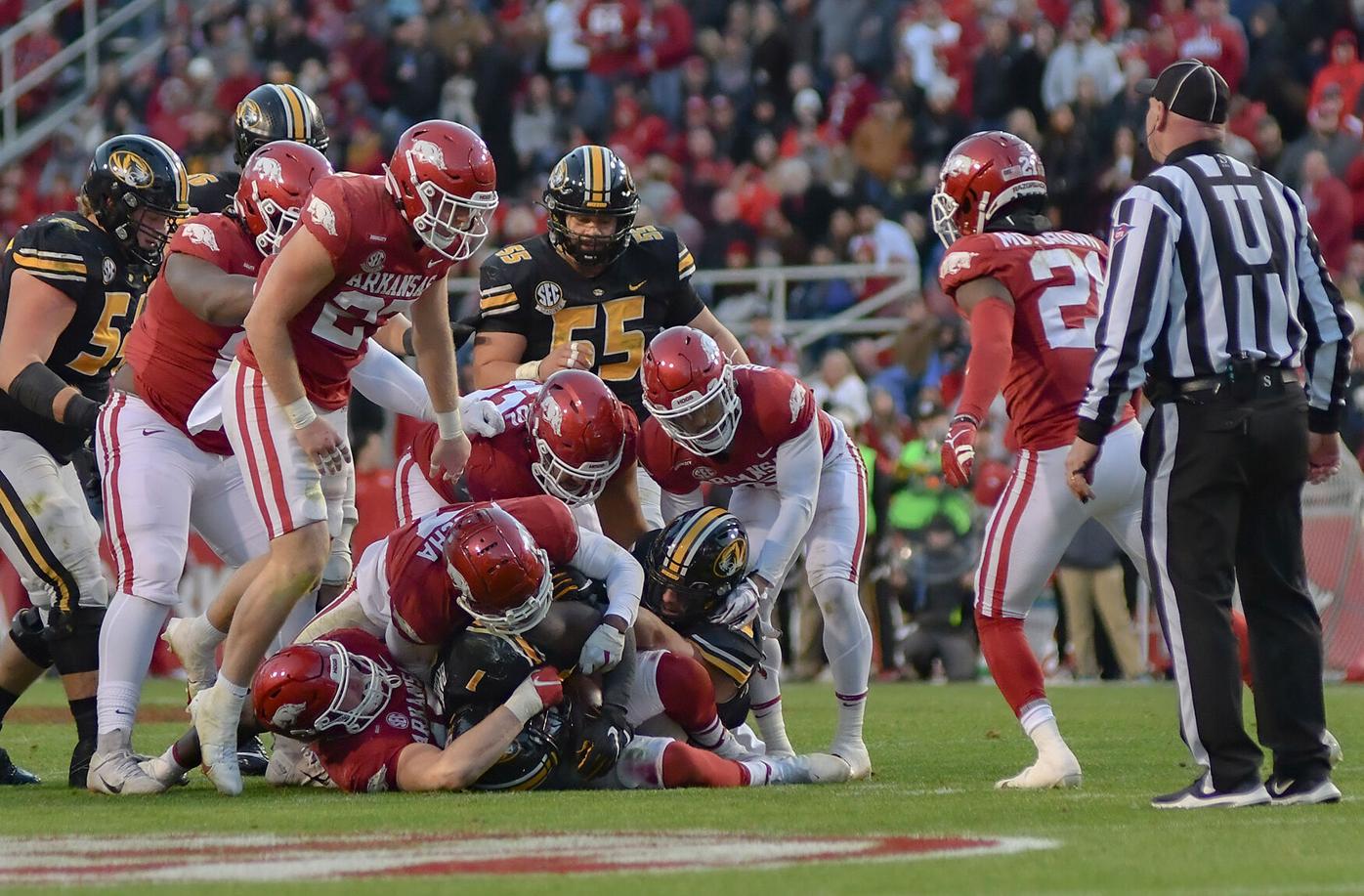 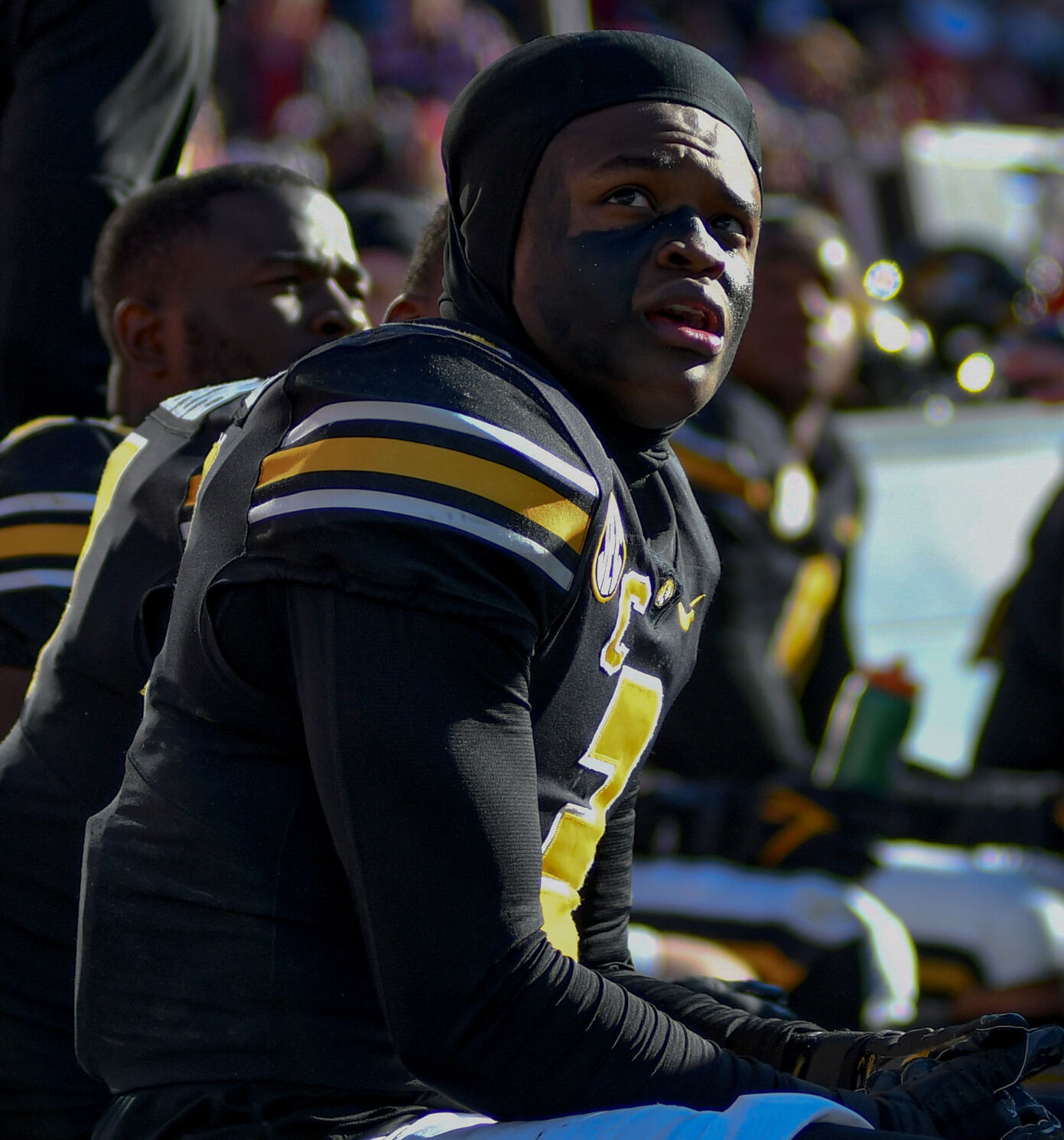 Martez Manuel looks up at the scoreboard Friday at Reynolds Razorback Stadium in Fayetteville, Ark. The Tigers lost 34-17 to the Razorbacks. 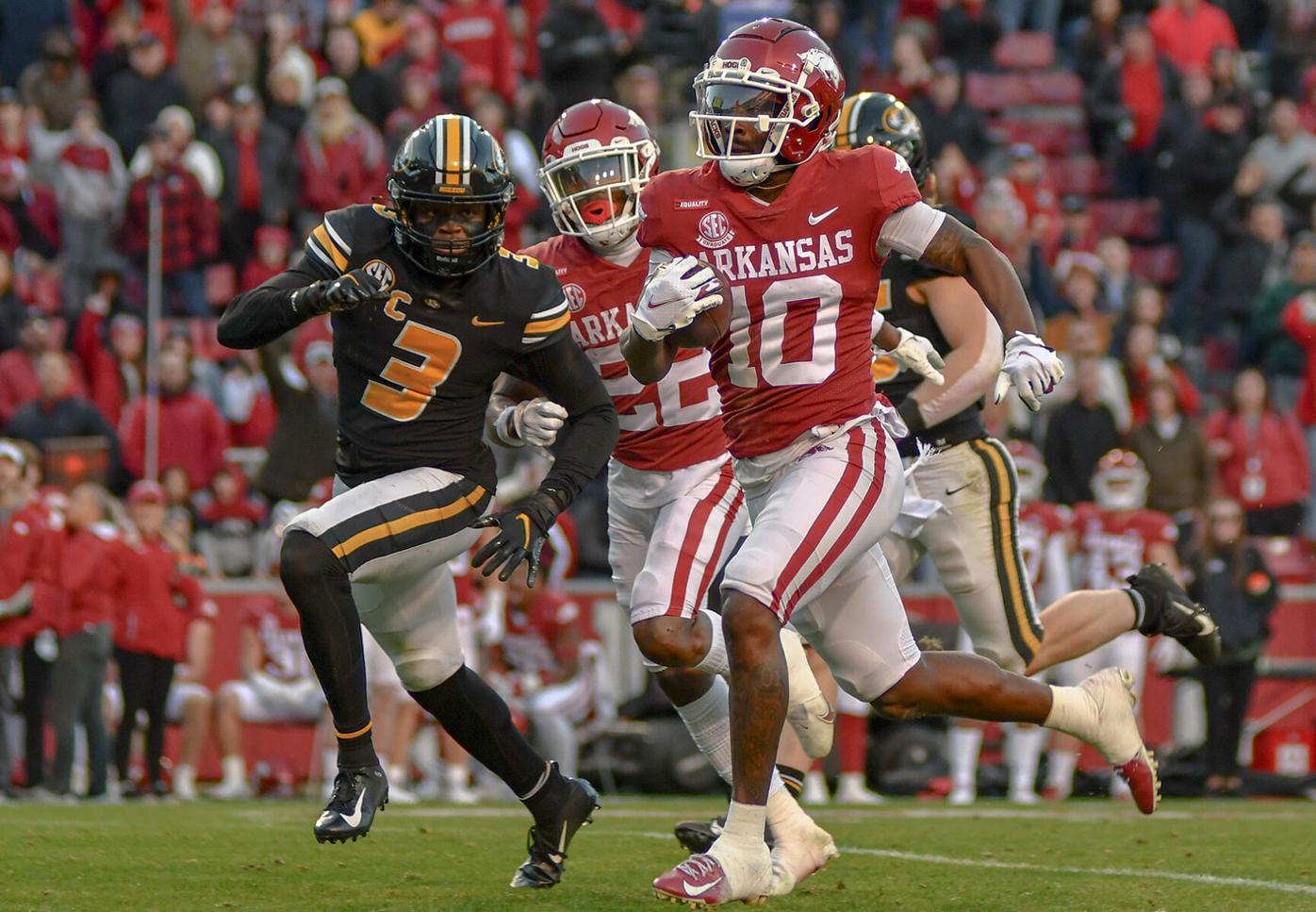 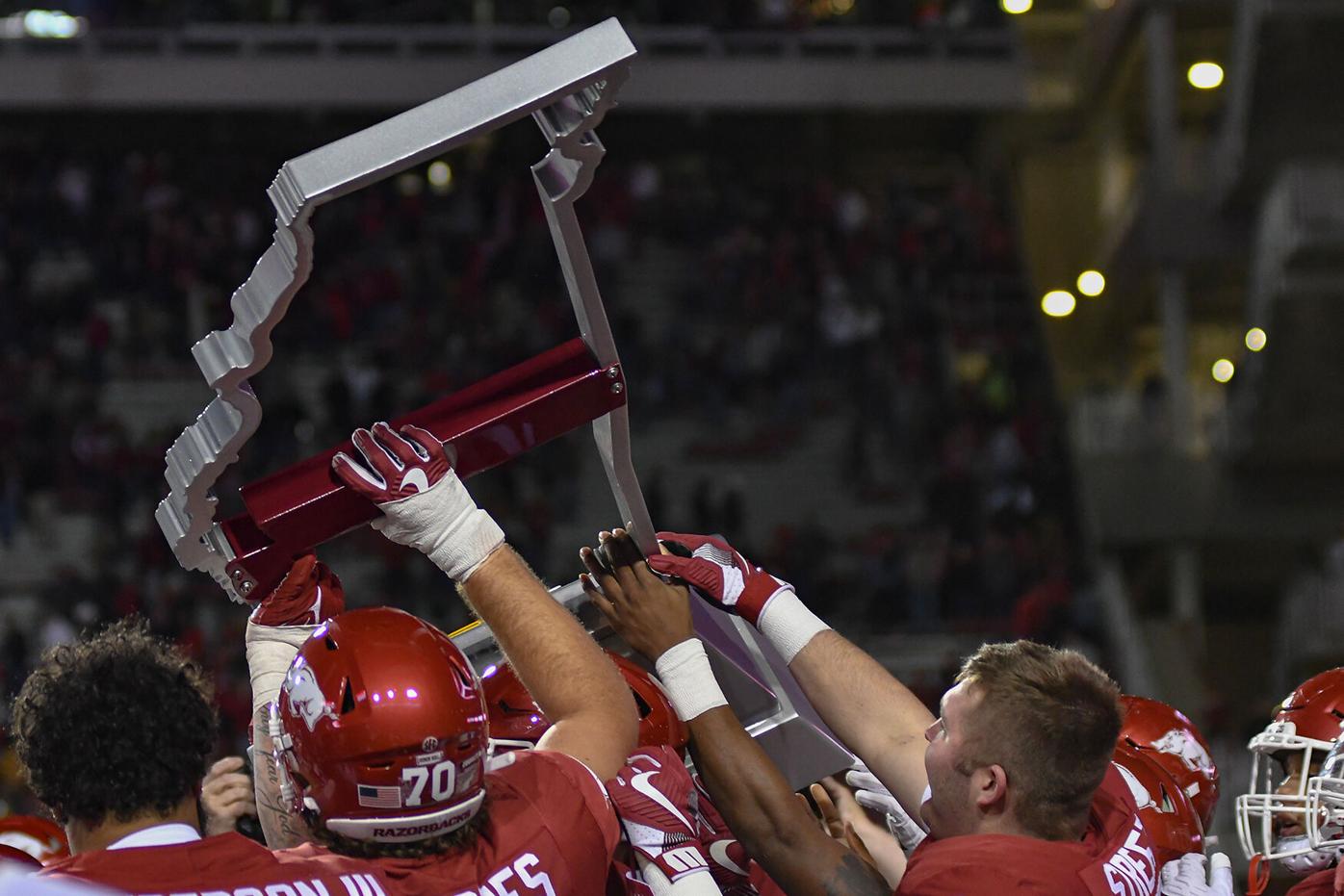 Tyler Badie runs with the ball Friday at Donald W. Reynolds Razorback Stadium in Fayetteville, Ark. Badie rushed for 219 yards in the loss.

Martez Manuel looks up at the scoreboard Friday at Reynolds Razorback Stadium in Fayetteville, Ark. The Tigers lost 34-17 to the Razorbacks.

FAYETTEVILLE, Ark. — Barbecue was on the menu Friday at Razorback Stadium, and it was Missouri’s defense being smoked.

Over five plays in the third quarter, Missouri gave up two touchdowns, both set up by chunk plays through the air. Arkansas quarterback KJ Jefferson had 148 passing yards in the quarter alone on the way to a 262-yard game.

“(Jefferson’s) a big-time quarterback, and he did what he needed to do for his football team tonight,” MU coach Eliah Drinkwitz said.

After going three-and-out to open the half, Jefferson connected with wide receiver De’Vion Warren for 55 yards on the first play of the Razorbacks’ second drive. The play would have been a touchdown had MU cornerback Allie Green IV not brought Warren down at the 6-yard line.

Two plays later, though, Arkansas found the end zone. Another two offensive plays after that, the Razorbacks added another touchdown on a 52-yarder from Jefferson to Treylon Burks.

Despite the Tigers defense struggling in the second half, it was still the lesser of two evils in the regular-season finale. Missouri held Arkansas to 167 yards, 73 on the ground and 94 through the air, in the first two quarters of the game.

Over half of those rushing yards came from Jefferson, who broke away up the middle in the first quarter for a gain of 49 during what would become Arkansas’ first scoring drive. It ended with a 36-yard field goal by Cam Little.

The Tigers didn’t score until the second quarter, when Harrison Mevis hit his first of three field goals on the day. The 46-yarder tied the game for MU, but Arkansas scored a TD two drives later and took a 10-3 lead. Mevis hit his second before the end of the half to bring the score to 10-6.

“Defense played lights-out,” WR Keke Chism said. “They played a very great game. We had a lot of opportunities to make plays and take control of the game when it was a one-score game, and, just from an execution standpoint, we weren’t able to get it done. Whatever was going on, it was completely on us.”

Missouri’s offense didn’t reach the end zone until late in the fourth quarter, when running back Tyler Badie — one of the game’s only bright spots for MU — punched in a 5-yard touchdown.

Badie earned 219 yards on 41 carries, his fifth 200-plus-yard rushing game of the season. He broke MU’s program record for single-season rushing yards of 1,578. The record was previously held by Devin West.

Quarterback Brady Cook helmed Missouri’s sole touchdown. The redshirt freshman replaced starter Connor Bazelak with 5:47 to go in the game and handed the ball off on every play of the drive.

Bazelak played his worst game of the season, completing just 10 passes for 65 yards, a week after he was booed in his home stadium during Missouri’s win over Florida. In that game, Bazelak threw for 165 yards on 15 completions, his lowest total of the season before Friday’s loss.

An early indicator that the passing game might struggle was an overthrown pass targeting D’ionte “Boo” Smith on third-and-2 of MU’s opening drive. Smith was wide open at the Arkansas 15, and the play would have been more than 35 yards. Instead, Missouri’s biggest offensive play ended up being a 26-yard completion to Chism to convert a third-and-6 in the second quarter.

“They had a pretty good defensive scheme,” Chism said. “Feel like we just, it was a lot of plays out there that we missed from an execution standpoint, or maybe it was penalties or things like that. Just kind of shooting ourselves in the foot at the wrong time just was kind of the biggest thing that held us back in my opinion.”

Bazelak was also picked off in the fourth quarter by Montaric Brown, setting up Arkansas’ final scoring drive and bringing his season total to 11 interceptions.

However, Drinkwitz did not consider pulling Bazelak from the game any earlier than he did.

“I don’t ever want our quarterbacks to feel like if they make a single mistake they’re gonna get pulled, so after the interception, I wanted to give him another chance to drive us down and see what he could do,” he said.

It wasn’t just Bazelak who weighed the offense down, though. The Tigers had four accepted penalties for a total loss of 51 yards. One of them was a 15-yard facemask penalty by Badie as he was dragged down out of bounds by Myles Slusher.

“We kind of backed ourselves up,” Badie said. “I made a dumb penalty. ... As a leader, I can’t do those type of things on the field. I gotta be able to keep my emotions intact.”

Missouri once again finishes its regular season with a .500 record. The Tigers haven’t had a winning season since 2018, when then-QB Drew Lock led them to an 8-4 regular-season record and a Liberty Bowl loss against Oklahoma State.

The bowl game selection show is next Sunday, and if Missouri is picked, it will be the first one it has played in since 2018. MU served a bowl ban in 2019 because of an NCAA infraction and had to forfeit its 2020 bowl game because of COVID-19 cases in the program.