EDITOR’S NOTE: This story will be updated throughout the day.

The NCAA Infractions Appeals Committee has denied Missouri’s appeal and upheld the penalties handed to MU Athletics in January for findings of academic misconduct, sources confirmed to the Missourian on Tuesday morning. The NCAA made the official announcement at 1 p.m. CST.

The decision upholds a list of sanctions announced Jan. 31 that includes postseason bans for the Missouri football, baseball and softball programs that now become effective immediately. That means no matter what happens Friday against Arkansas, Missouri cannot participate in a bowl game.

“Now I am just angry,” Sterk said Tuesday. “I am angry because of our student athletes and our coaches who were so wrongly impacted by this decision from the appeals committee and the committee on infractions. The NCAA has proven again it cannot effectively serve its membership and the student-athletes it is supposed to protect. The decision today is just wrong.”

The NCAA also levied a 5% decrease in scholarships for all three programs in the next academic year; a $5,000 fine; a 1% decrease in budgets for those three programs; a seven-week ban on recruiting communication and unofficial visits; vacated wins; and a three-year departmentwide probation.

The NCAA Committee on Infractions assessed those penalties after former MU tutor Yolanda Kumar was found to have violated NCAA ethical conduct, academic misconduct and academic extra benefits rules by completing coursework for 12 student-athletes. The coursework ranged from homework assignments to placement exams.

The report released Jan. 31 showed that Kumar also took an entire math course for one athlete and completed work for two others on placement exams. She also did work from other schools for six of the Missouri athletes.

“While there is no excuse for the actions of a single academic tutor and the small number of student-athletes involved, the penalties applied are unusually severe when fully considered,” SEC Commissioner Greg Sankey said in a statement.

The report said that the investigation did not find any evidence that “her colleagues directed her to complete the student-athletes’ work,” but Kumar told investigators that she felt pressured to help the athletes with the coursework.

Nine of the 12 athletes competed while ineligible, according to the athletic department. None of the 12 is still at MU.

“This decision negatively impacts (current student-athletes’) short experiences in life as college student-athletes who had nothing to do with this situation,” Missouri football coach Barry Odom said in a statement. “It’s a tough lesson to be dealt, but they will learn from this and motivationally use it later in life when hardship comes along.”

Missouri only expected to be hit with probation and the vacated wins, Sterk said in February. Sterk pointed to precedent in similar cases and Missouri’s exemplary cooperation as the school’s case for the other penalties to be overturned.

In the appeal in July, MU argued that the level of the case should be Level I-mitigated, not Level I-standard because of three primary factors:

MU argued that self-detection and self-disclosure should have been mitigating factors that the COI acknowledged. The COI, however, said that prompt detection only becomes a mitigating factor if a compliance system that could have caught the violations had been in place when the violations occurred. The authority to determine what is mitigating and what is aggravating and how to weigh them is something the COI asserted when it made its decision. The Infractions Appeals Committee said in its decision released Tuesday that NCAA rules give the COI that power. (See the full Infractions Appeals Committee statement below.)

And because the COI decision gave reasoning and analysis as to why it did not apply certain mitigating factors, the IAC would not undermine that ruling.

The IAC, however, said it agrees that the two additional mitigating factors could have been applied. MU needed to provide more than disagreement with the COI, though. The IAC said MU did not show the COI’s reasoning failed to consider the mitigating factors.

Another argument MU made in its appeal is that the postseason ban, recruiting restrictions and scholarship reductions didn’t line up with other cases similar in conduct. MU also said the sanctions did not match those in more severe academic misconduct violations.

The COI shot that argument down by saying facts on different cases can’t be compared because they are unique. That’s not enough to overturn penalties or the level of the case. However, the COI did look at other Level I-standard cases of academic violations. That only hurt MU — the COI found MU’s case included a higher number of student-athletes and sports programs than the other cases.

The IAC wasn’t about to overturn these findings/decisions. It said that without clear indication of arbitrary decision-making, the IAC was “hesitant to overturn a penalty within the appropriate penalty guidelines.”

In all, the Infractions Appeals Committee did little more than confirm the original decision by the Committee on Infractions.

“I think the appeals committee came to a point,” Sterk said, “and they said, ‘We can’t overturn it because it is in this matrix.’ Why in the heck do you have an appeals process if they can’t overturn a decision like that, where there is exemplary cooperation?”

But alas, at the end of the appeals process, Missouri is stuck with the sanctions handed down Jan. 31.

“This decision really creates a situation where, the NCAA system, I am not sure if it is currently encouraging or discouraging compliance and integrity,” MU Chancellor Alexander Cartwright said.

This decision comes despite MU Athletics’ public attempt to not only oppose but condemn the decision made by the Committee on Infractions.

When the announcement was made Jan. 31, Sterk said the Committee on Infractions had “abused its discretion” when it came to the sanctions it levied against Missouri.

“We are shocked and dismayed by the penalties that have been imposed today and will aggressively fight for what is right,” Sterk said Jan. 31.

Soon after, Sterk and the athletic department launched the “Make it Right” campaign in alignment with Sterk’s “Win it Right” mantra.

“Make it right so the appropriate penalties (are given) for the actions that were taken,” Sterk said when explaining the mantra in February, “and to take into consideration the mitigating circumstances around the case.”

The campaign, which includes a website, apparently did not change any minds when it came to Missouri’s appeal. Neither did the publicly voiced opposition from many Missouri politicians and university officials.

Missouri expected to win the appeal, Sterk told reporters the day the sanctions were announced, but now the Tigers will have to move on knowing they are facing these penalties.

Missouri self-reported the violations, a spokesman for the Committee on Infractions said Jan. 31. Officials from a number of other schools have suggested that the value of self-reporting might be affected if Missouri didn’t win its appeal.

Jon Sundvold, chair of the UM Board of Curators, said in a statement that the NCAA enforcement system is broken and that this ruling sets a dangerous precedent.

“Mizzou did the right thing,” Sundvold said. “This ruling tells every other school that it’s better to hide the truth than to admit mistakes.” 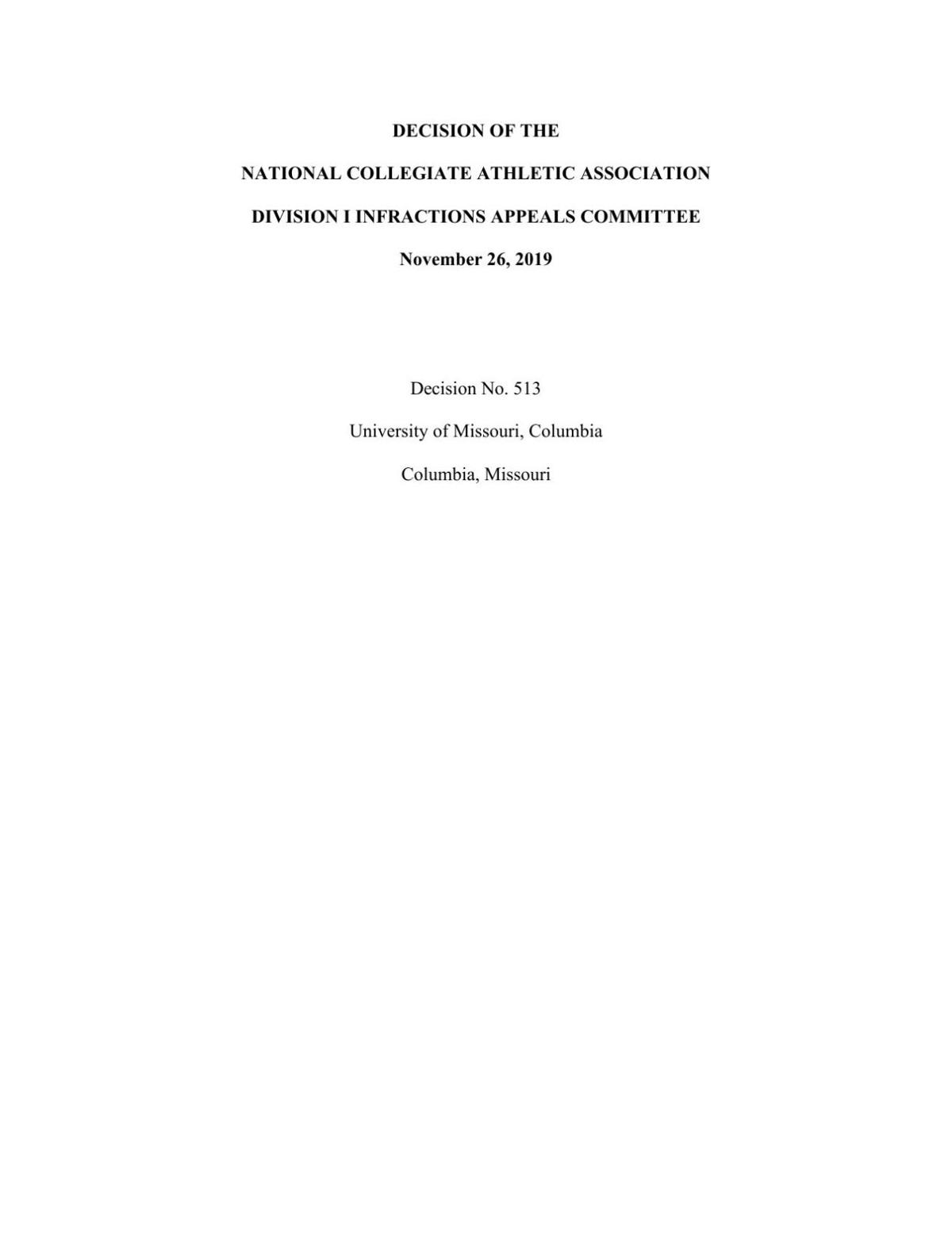 The bowl ban made official by the NCAA on Tuesday will cause more problems for an athletic department already in the red.

Identity of voter who bypassed Jeter may never be known