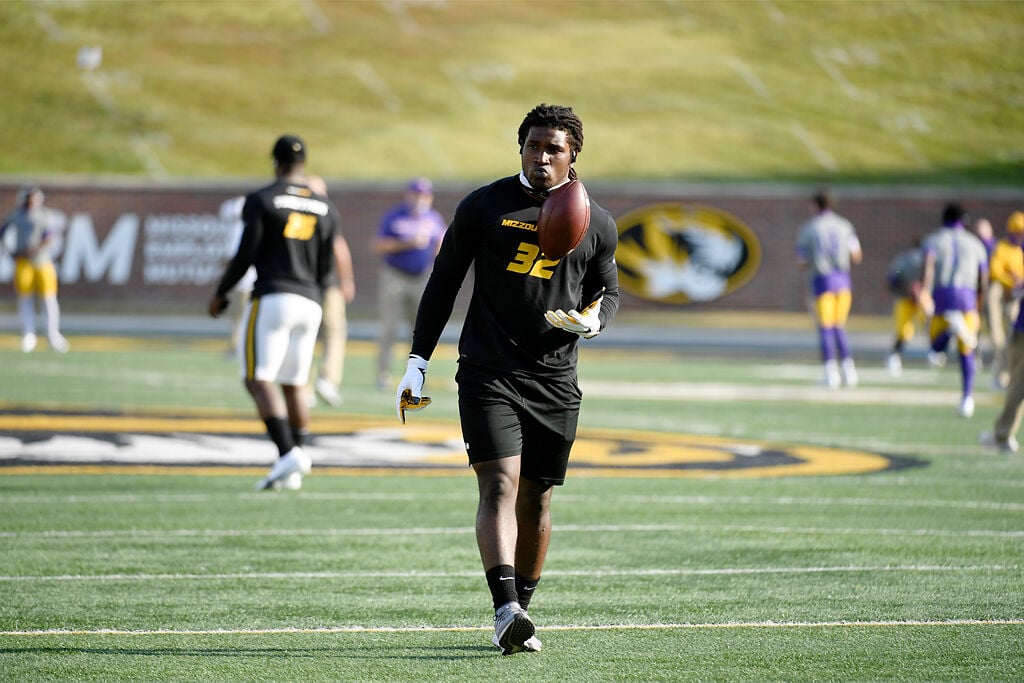 Missouri linebacker Nick Bolton warms up before the start of Missouri's game against LSU on Saturday in Columbia. Bolton was named the Bronko Nagurski National Defensive Player of the Week on Tuesday. 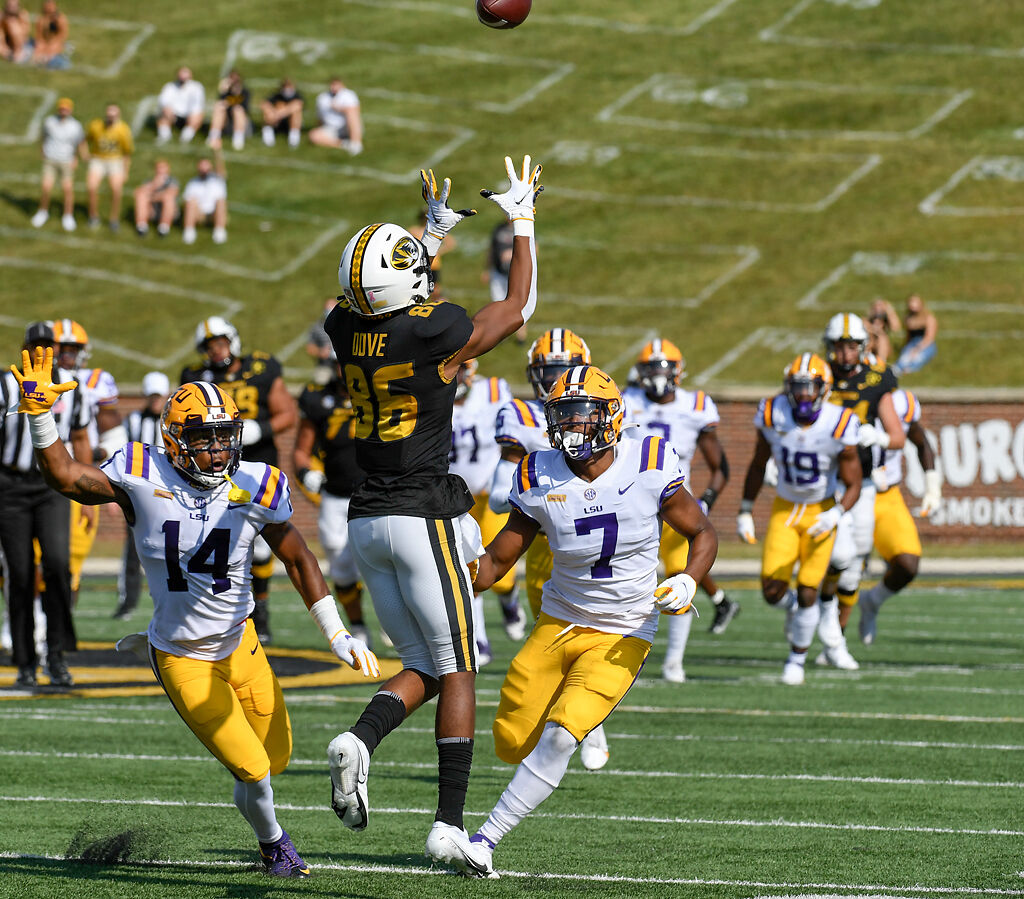 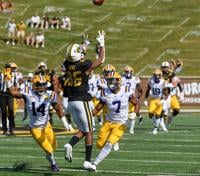 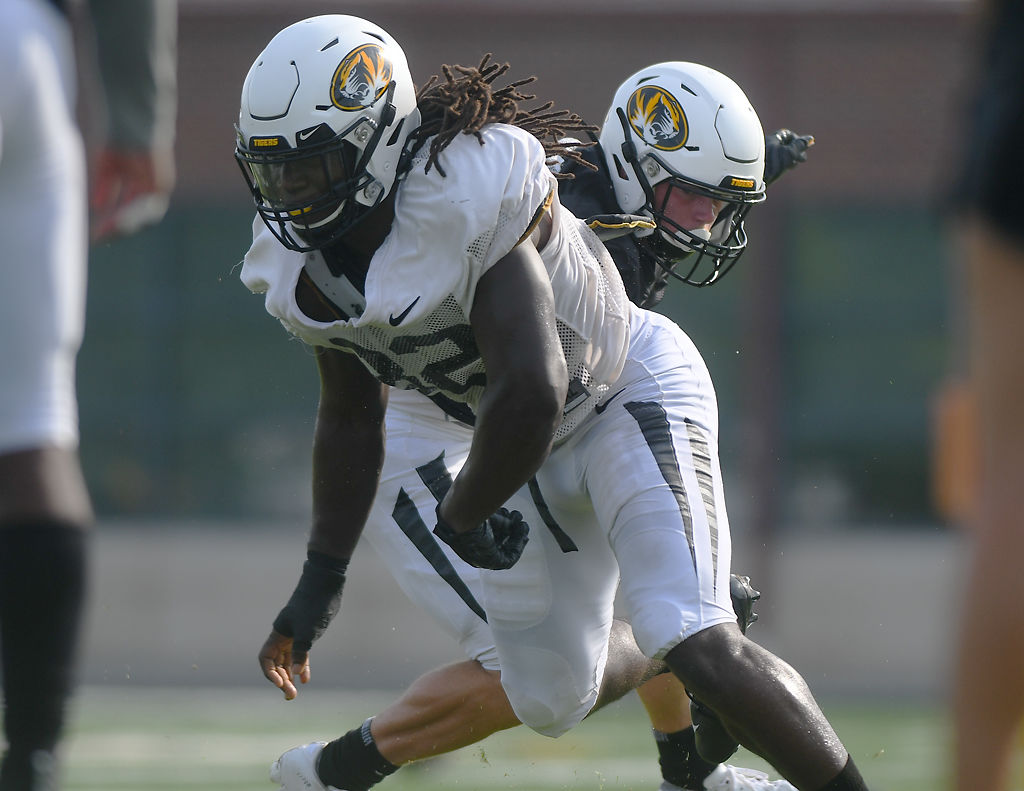 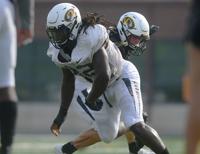 Linebacker Nick Bolton, left, slips past running back Jerney Jones during practice Sept. 17 at the Mizzou Athletics Training Complex. Bolton was named the Bronko Nagurski National Defensive Player of the Week on Tuesday. 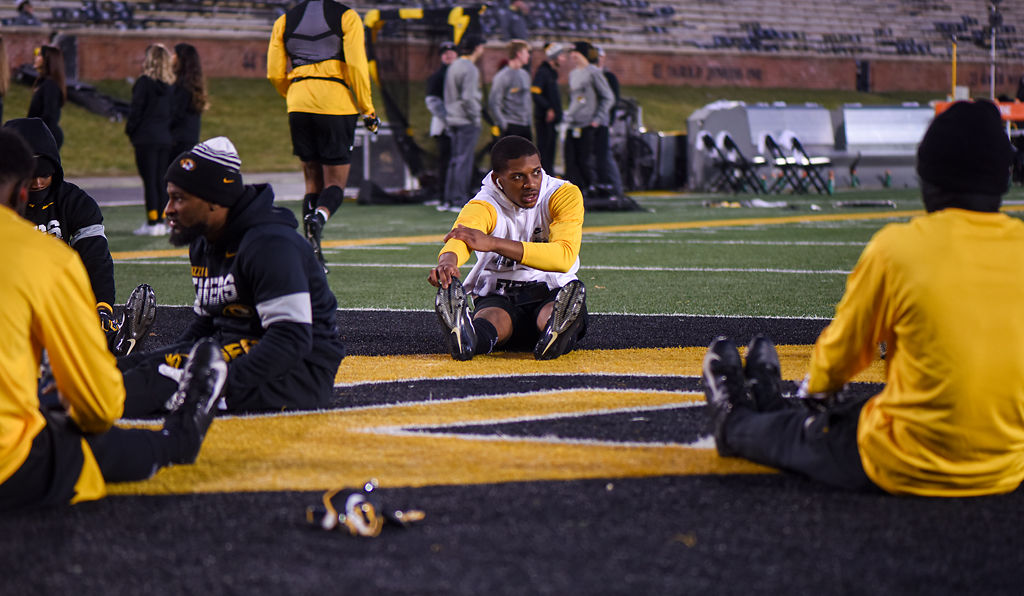 Missouri linebacker Nick Bolton warms up before the start of Missouri's game against LSU on Saturday in Columbia. Bolton was named the Bronko Nagurski National Defensive Player of the Week on Tuesday.

Linebacker Nick Bolton, left, slips past running back Jerney Jones during practice Sept. 17 at the Mizzou Athletics Training Complex. Bolton was named the Bronko Nagurski National Defensive Player of the Week on Tuesday.

Missouri was given extra time to regroup between games Monday when the Southeastern Conference announced that Saturday’s game against Vanderbilt is postponed to Dec. 12. Missouri coach Eliah Drinkwitz called the development a “tremendous blessing” for his team Tuesday.

“We’ve played really three tough SEC opponents, all ranked,” Drinkwitz said. “It’s a physical game in the trenches for us to try to get healthy. Bumps, bruises, obviously. Get people out of quarantine; get people out of contact tracing is going to be good.”

In Saturday’s 45-41 win over then-No. 17 LSU, the Tigers were down two defensive linemen because of injuries, and they were missing six because of COVID-19-related issues, including starting receivers Keke Chism and Damon Hazelton. Drinkwitz also said the bye week is a chance for Missouri to reevaluate where it is after three weeks.

The turnover margin is the “No. 1” area Missouri needs to improve on, Drinkwitz said. He noted the team’s six turnovers and three muffed punts juxtaposed with one takeaway. His goal is at least two takeaways per game.

“For us, that’s a strong point of emphasis that we have to make to our players and to our staff: that we have to improve in not only our ball security, but in taking the ball away from them,” Drinkwitz said. “We can work on those things and really get some specific practices and fundamentals looked at.”

Drinkwitz said Tuesday that defensive linemen Kobie Whiteside and Darius Robinson, who were both out with lower body injuries against LSU, are on track to be playing by Missouri’s originally scheduled off day of Nov. 7.

There’s also a possibility that Robinson could be back for the Tigers’ game against Kentucky on Oct. 31, Drinkwitz said.

Linebacker Nick Bolton and receiver Tauskie Dove were praised Tuesday for their performances against LSU, as Bolton was named the Bronko Nagurski National Defensive Player of the Week, and Dove was added to the Earl Campbell Tyler Rose Award Honorable Mention List.

Bolton had a team-high 11 tackles in Saturday’s win, and he added three pass breakups. He also made three crucial stops in the final drive of MU’s win. So far this season, he is No. 7 in the country in tackles with 36.

Dove had an emphatic performance against LSU, catching six passes for 86 yards and scoring on an opening-drive flea flicker.

Seven SEC teams put up more than 40 points Saturday. Through three games, five SEC defenses are also bottom-10 in the country in pass yards allowed per game, including Missouri’s.

Despite their win over the Fighting Tigers, the Tigers still gave up 430 yards and four scores through the air to Myles Brennan on Saturday.

Drinkwitz said Tuesday that he doesn’t see porous defensive performances as a trend, though, largely because of COVID-19.

“For me, I tend to see this as probably an aberration instead of the new norm,” he said. “I think it’s probably just a result of: People didn’t tackle probably as much as they wanted to during fall camp because you didn’t know when you’re going to play and who all was going to get injured based off also having to be prepared for COVID.”

In accordance with a St. Louis Post-Dispatch column published Tuesday, there was speculation around exactly what the comments were referencing. A day prior to the win, St. Louis wideout and five-star recruit Luther Burden committed to Oklahoma. Although the comment could have been seen as an indirect message to Oklahoma, Drinkwitz clarified when asked about it Tuesday.

Berman, an ESPN broadcaster and former host of Sunday NFL Countdown, used to say, “Nobody circles the wagons like the Buffalo Bills.”

“All I was insinuating was we’ve had a lot of different things that could have turned our attention toward what we didn’t have instead of what we did have, and what we do have is each other,” Drinkwitz said Tuesday. “We just decided that we weren’t going to let the outside rattle us; we were going to believe in each other.”

SEC standouts who returned for more finding success so far

Lowe homers twice, Rays hold off Dodgers 6-4 to even Series