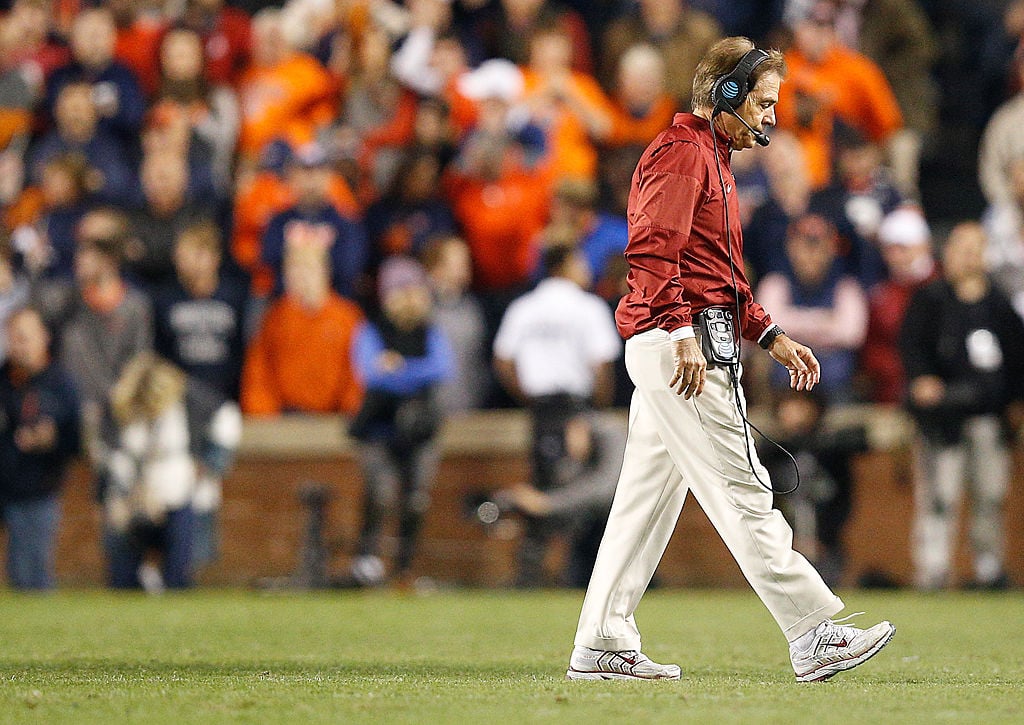 Alabama coach Nick Saban told reporters at the SEC meetings on Tuesday that he is not in favor of the league's changing its policy requiring in-conference graduate transfers to sit out a full season before becoming eligible. 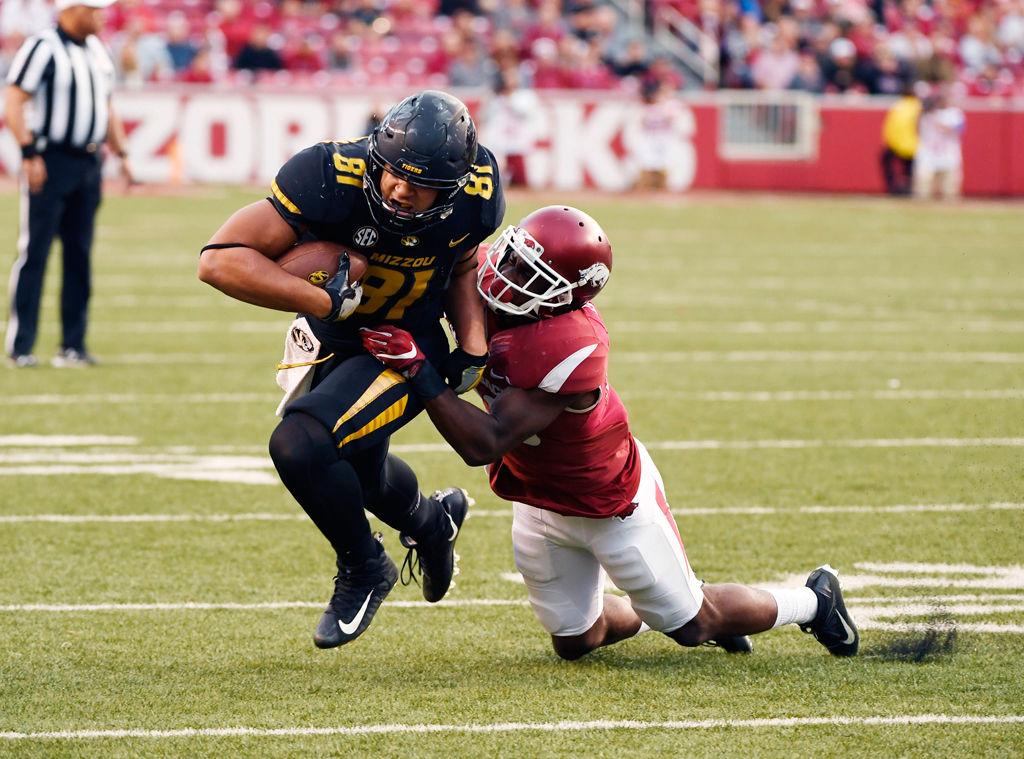 Alabama coach Nick Saban told reporters at the SEC meetings on Tuesday that he is not in favor of the league's changing its policy requiring in-conference graduate transfers to sit out a full season before becoming eligible.

It’s 3:45 a.m. Monday, and a representative from each of the 12 SEC teams that didn’t make Saturday’s conference championship have gathered for the 25th annual end-of-the-regular-season banquet at a Waffle House in Knoxville, Tennessee. The representatives are usually each team’s head coach, but with the firing of Arkansas’ Bret Bielema and Texas A&M’s Kevin Sumlin and the departure of Mississippi State’s Dan Mullen to become the new man in charge at Florida, some last-minute guests had to be called upon for this important event. The seating arrangement is as follows:

STOOPS, as the longest-tenured coach of a team that has yet to make an SEC Championship since its inception in 1992, is given the honor of opening the banquet with a few remarks while the Waffle House WAITER — a string-bean-looking, glasses-wearing man who resembles Paul Finebaum without the shiny bald spot — is hard at work preparing 12 All-Star Specials. Kentucky’s coach clinks a spoon against his coffee mug three times to get the banquet’s attention.

STOOPS: Let me take this time to welcome everyone and thank those of you whose teams are bowl-eligible for taking some time out of your preparation to be with us this morning. This is always a special event, special time of the year for us to get together and celebrate making it through yet another trying season in the Southeastern Conference. No one really knows what we coaches go through during the course of the 13-week regular season but the people you’re bumping elbows with, so consider this your time to speak freely and take a load off with some dang good waffles, hash browns and bottomless coffee. I’d like to thank our non-coach representatives for being here tonight in the midst of uncertainty at their respective programs and extend a big thank-you to Butch Jones for booking our reservation at this Waffle House months in advance. I’d like to propose a toast in his honor.

Everyone raises their coffee mugs in the air.

Everyone takes a sip of coffee.

STOOPS: Now, Dan approached me earlier in the day about addressing the banquet after what has been, I’m sure, an emotionally difficult but exciting time as he leaves Starkville, Mississippi, to take over at Florida. Dan, the floor is yours.

MULLEN stands at Table 2, takes another sip of coffee and faces the congregation.

MULLEN: Just wanted to follow Mark in extending a few “thank-yous” of my own before the food gets here. I’m extremely grateful to Mississippi State for giving me nine of the best years of my life and hope, Bully XXI, that there are no hard feelings between us as I make the transition from Bulldog to Gator again.

BULLY XXI’s expression at Table 3 remains stoic, as English Bulldogs tend to only have one facial expression.

LUKE: He probably thinks you’re just in it for the money.

MULLEN: C’mon, Bully XXI, there’s no need to be cold about it! I built a program there and left a solid foundation for whomever takes over. I mean, Nick Fitzgerald will come back from this ankle injury better than ever. I’d even say the best returning QB in the conference.

ODOM, mid sip of coffee, starts laughing and has to wipe off a bit of brown liquid sliding out of his nostril.

ODOM: We’ll take it one game at a time. Obviously going to need a lot of stellar Tuesday practices out of Micah Wilson.

LUKE: You’re just in it for the money, aren’t you, Dan? Good luck with Feleipe Franks, buddy.

MULLEN puts his face in his palm for a second, then continues.

MULLEN: ... anyway. I’d like to thank the Florida administration and fans for being so welcoming. As we saw — I’m sure all of you saw — what transpired in this very town over the past 24 hours or so, that’s not always the case when you make a head-coaching hire.

Everyone lets out a snicker under their breath.

MUSCHAMP: Yeah, Brady, what the hell even was all that?

HOKE, who had been too busy stroking REVEILLE’s shiny mane to pay attention, looks up.

HOKE: What, here? Heck if I know. After Derek’s team whipped our tail real good Saturday, I’ve been laying low. Figured our staff would be headed out the door once the new guy’s brought in, so I’ve been on this whole “finding yourself” kick. Meditating a lot, doing some watercolors down by the Tennessee River, making the transition to a vegan lifestyle ... .

ORGERON (in his indecipherable Cajun accent): So, if I’d said the name Greg Schiano as a potential coaching replacement at UT, ... you’d say?

HOKE: Schiano? Heck of a coach! I mean, the Rutgers rebuild speaks for itself. Sure, he was bad in the NFL, but what’s so bad about snagging Ohio State’s defensive coordinator? Passes my résumé test.

MASON: You mean you really don’t know? You mean you didn’t see the protests on campus and ”SCHIANO COVERED UP CHILD RA—”

STOOPS covers MASON’s mouth midsentence as the WAITER comes over to the congregation and begins handing out plates.

WAITER: You guys sure must be hungry. I didn’t even ask what the occasion was. Who had the bacon?

STOOPS: I think it was our hog friend over there, sir.

WAITER: Now that’s even more messed up than Arkansas firing Bielema seconds after the Razorbacks lost to Missouri.

ODOM: You know what his problem was? Bielema didn’t pour a bunch of box scores, old plays, etc. into a cooler and set them on fire. Worked like a charm in Columbia. Might have even locked me up SEC Coach of the Year.

This comment provokes an uproar from the entire congregation, and WAITER only adds more noise as he struggles to discern who got their hash browns smothered and who got theirs chunked.

Everyone sighs and looks over to SABAN at Table 3.

SABAN: Why did I get stuck in the splash zone of this here hog eating bacon and grits?

STOOPS: Let’s stop with the complaining, OK, newbie? Nothing but doom and gloom and complaining out of you since Saturday. Sheesh, I love Gus Malzahn, but I almost wish you guys would have done the dominating instead of getting dominated at Jordan-Hare so he’d be here instead of you.

MASON: Yeah, why don’t you learn your place, Saban? You may be all high and mighty running the best college football dynasty in the country, but, when you’re at the losers’ banquet, we run the show. Got it?

Silence falls on the banquet as WAITER finishes dispersing the All-Star Specials and refreshing coffee. He leaves one big check next to STOOPS.

REVEILLE barks and wags her tail in approval.

MUSCHAMP (making a diagonal cut into his syrup-soaked waffle): Now, Brady, you must tell us all more about these Tennessee River watercolors.

SEC CHAMPIONSHIP: No. 2 Auburn vs. No. 6 Georgia

Up: Fines and the dangers of hedge jumping.

Auburn fans racked up a hefty — but justified — $250,000 fine for rushing the field after the then-No. 6 Tigers handily upset Saban’s top-ranked Crimson Tide 26-14 on Saturday at Jordan-Hare Stadium.

“Fans are expected to remain in the stands and avoid the safety concerns associated with rushing on to the playing field,” SEC commissioner Greg Sankey said in a release announcing the fine. “We want exciting experiences around SEC games but also seek to maintain a safe environment for student-athletes, coaches, spectators and officials.”

One of those “safety concerns” are the hedges that surround Pat Dye Field, which might have taken a beating from fans picking out branches to remember the night by but also claimed more than a few unsuspecting victims trying to join in on the celebration.

Meanwhile, I'm cracking up at these Auburn fan who got themselves stuck in the hedge pic.twitter.com/kV4urSL8oL

Out of all the bowl-eligible SEC teams, Stoops’ Wildcats might be limping the most into the postseason after an ugly 44-17 loss to in-state rival Louisville and defending Heisman winner Lamar Jackson, now the most slept-on 2018 Heisman Trophy candidate in the country.

The ugliest part of the loss wasn’t the final score, Kentucky’s inept defense or the fact that the Wildcats — losers of three of their final four games — ended the regular season 7-5 despite starting the year 5-1, though. It was the behavior of junior linebacker Jordan Jones, who started a fight with Jackson after the QB was stopped at the UK 1-yard line during the first quarter.

Jackson shouldn’t have shoved back, which caused the altercation to explode into a full-blown skirmish, but it felt justifiable after watching Jones — who didn’t stop the Heisman winner on the play or during the majority of the afternoon on the field, for that matter — stand over the QB and blatantly throw a head-butt seconds after an official had blown the play dead. It was a cheap shot trying to provoke a response, which it got, because the only way the linebacker was going to stop Jackson on Saturday was outside the lines.

Florida Atlantic coach, former Alabama offensive coordinator and former Tennessee coach/deserter Lane Kiffin won the final Tweet of the Week award of the 2017 season at the buzzer with this response to a picture of The Rock, a 97½-ton Knox dolomite easel at the corner of Volunteer Boulevard and Pat Head Summitt Street where an individual can express whatever’s on his or her mind, adorned with “BRING LANE HOME” in orange spray paint on a white background Tuesday morning.

I flew Knox there last nite to do that why u were asleep 😴. Thx Knox now get back to 3rd grade class. Ur teacher just called. 👨‍🎓🦉🔥🏈🎳 @finebaum @espn pic.twitter.com/ZCtVHhVFEq

“I flew Knox there last nite to do that why u were asleep sleeping emoji,” wrote Kiffin, who signed a six-year deal with the Volunteers after Phillip Fulmer retired in 2008 but only coached the team through a 7-6 2009 campaign before leaving to become head coach at USC. “Thx Knox now get back to 3rd grade class. Ur teacher just called. cap and gown emojiowl emojiflame emojifootball emojibowling pin and ball emoji@finebaum @espn”

SEC FOOTBALL FOCUS: Ahead of yet another monumental Iron Bowl, Saban gives thanks

Before Saban's top-ranked Crimson Tide travel to Jordan-Hare Stadium to face No. 6 Auburn on Saturday with a berth in the SEC title game on the line, the heir to Bear Bryant's throne has 10 things to be thankful for.

Analysis: In tough NBA times, games not the top priority