Missouri announced the hiring of new head football coach Eliah Drinkwitz on Tuesday, and he did not come cheap. Drinkwitz will make $24 million over six years, according to a document distributed by the athletic department.

Drinkwitz’s base salary will be $450,000 plus a supplemental salary of $3.55 million, which adds up to an annual guarantee of $4 million, a huge raise from the $750,000 per year he was making at Appalachian State. That $4 million-per-year figure is static through the six-year length of the contract, unless Drinkwitz wins eight or more games or wins a bowl game during his first two seasons. In that case, he will automatically have one year added to his contract and his salary will grow by $100,000 in each successive year of the deal, starting with the following season. Missouri also paid Drinkwitz’s $1.7 million buyout at Appalachian State.

“We needed to pay the right amount to get the right person,” Missouri athletic director Jim Sterk said about Drinkwitz’s salary.

Drinkwitz’s salary is equal to LSU head coach Ed Orgeron’s 2019 salary. Orgeron, though, will make an extra $250,000 this season because LSU made the College Football Playoff. New Mississippi head coach Lane Kiffin, who has been a head coach in the SEC before, will make less than Drinkwitz will in 2020. Kiffin, who was hired Saturday, will make $3.9 million in his first season at Ole Miss, but his salary will rise by $100,000 every year until it reaches $4.2 million in 2023. 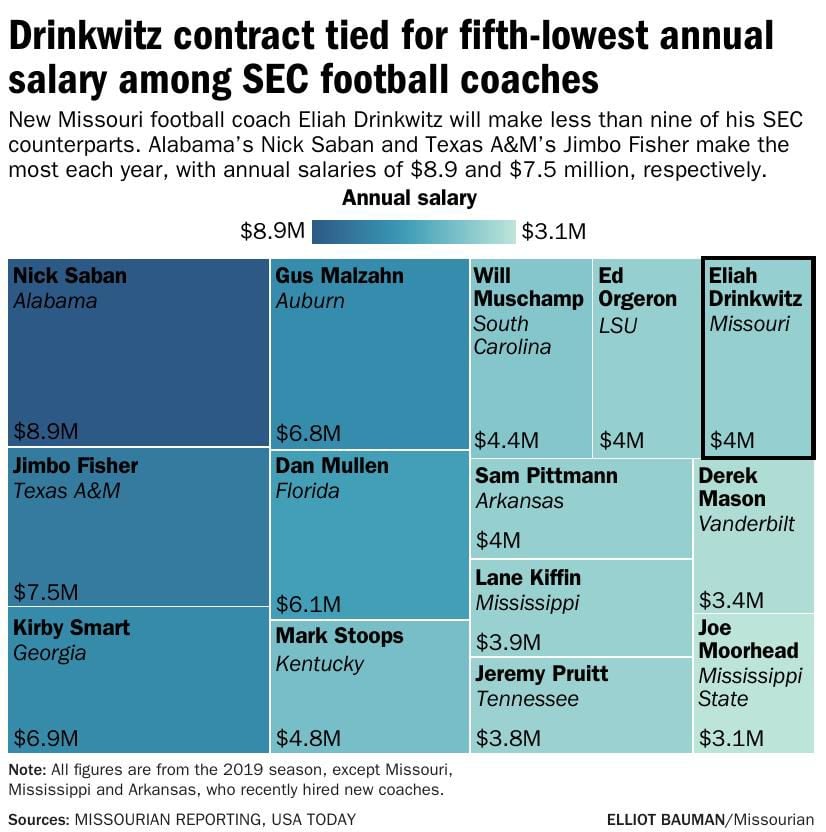 If Drinkwitz is fired before his contract expires, he is entitled to “70% of the total remaining annual compensation for the remaining contract term,” according to the document.

Also listed among incentives is “Aspirational Academic,” which would pay out $25,000. The document did not specify what that means, but Odom was given academic-related incentives in his contract. Those included a bonus if the team GPA was 2.85 or higher and a graduation success rate of 80% or higher, among others.

Drinkwitz will be allocated $5.2 million to hire 10 assistant coaches and $1.2 million for “executive assistants, analysts, director of operations and other football specific staff,” according to the document.

Sterk said on Nov. 30 that he did not expect to have to buy out the contracts of any current assistants, meaning they would either stay on staff or take jobs elsewhere. So far, only offensive line coach Brad Davis is leaving, a source confirmed to the Missourian. The Athletic reported on Monday that Davis was headed for a job at Arkansas.

Drinkwitz is being given other perks as well. At the university’s expense, he will have a country club membership, two courtesy cars, four premium tickets to home basketball games and family travel on the team charter.

Drinkwitz will receive $22,500, or 5% of his annual base salary, for moving expenses. He will also have access to a university-owned condo or other temporary housing for up to six months at no charge, if necessary.

With this contract, Drinkwitz becomes one of the highest-paid coaches in the country. Now, he goes to work.

“I’m going to coach football, regardless,” Drinkwitz said on the Paul Finebaum Show on Tuesday. “Now they just happen to pay me way too much do it.”

Doctor: Eriksen 'was gone' before being resuscitated