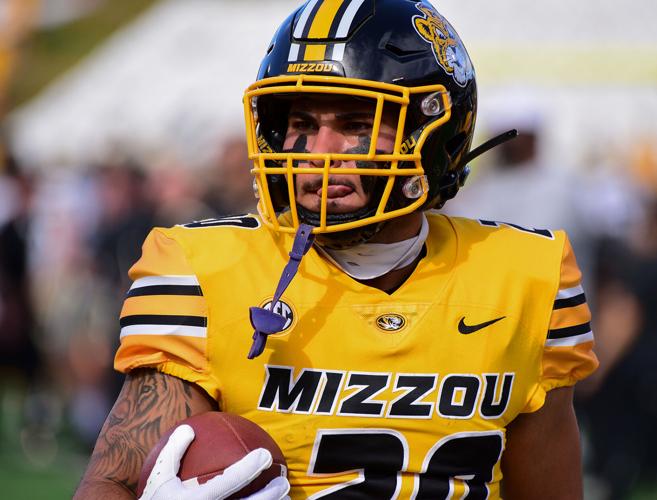 Missouri running back Cody Schrader warms up Oct. 22 at Memorial Stadium in Columbia. Schrader has a team-leading 121 carries this season. 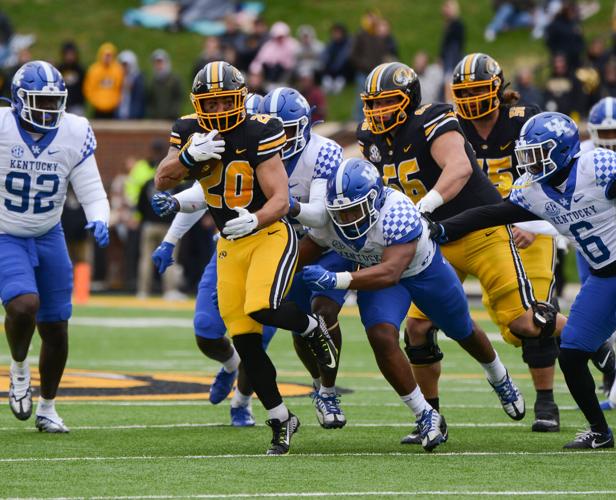 Missouri running back Cody Schrader is chased by the Kentucky defense Nov. 5 at Memorial Stadium in Columbia. Schrader has rushed for five touchdowns this season. 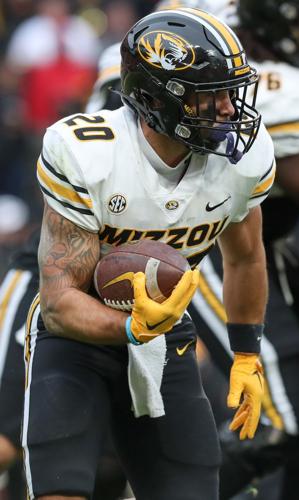 Missouri running back Cody Schrader runs with the ball Saturday at Neyland Stadium in Knoxville, Tenn.

Missouri running back Cody Schrader warms up Oct. 22 at Memorial Stadium in Columbia. Schrader has a team-leading 121 carries this season.

Missouri running back Cody Schrader is chased by the Kentucky defense Nov. 5 at Memorial Stadium in Columbia. Schrader has rushed for five touchdowns this season.

Missouri running back Cody Schrader runs with the ball Saturday at Neyland Stadium in Knoxville, Tenn.

This time last year, Cody Schrader was in Kirksville, Missouri, awaiting a Division II bowl game announcement after his Truman State team fell to Indianapolis at home. The season was over, but for the 2021 Great Lakes Valley Conference co-offensive player of the year, his next chapter was about to begin.

But what drove Schrader to playing in the Southeastern Conference wasn’t just his willingness to succeed; it was the passing of his friend Justin Budrovich. Schrader lost Budrovich on Nov. 24, 2019, nearly three years ago.

Schrader called Budrovich a brother. A brotherhood not defined by last name but rather by an everlasting friendship. Schrader noted two weeks ago that he wouldn’t be playing today if it weren’t for Budrovich.

“That kind of pushed a different level of spirit within me, to carry that dream that me and him had in high school (of) playing for a big school,” Schrader said. “That really pushed me, and I devoted that last game at Truman to him and got to wear his No. 2.”

Schrader played his last home game as a Bulldog on Nov. 13 in front of Budrovich’s family. While he typically wore No. 7, Schrader switched it for No. 2 — the number Budrovich was remembered for.

“That’s my only reason to play football,” Schrader said.

Budrovich left an impactful mark on Schrader’s life — one that he carries on his body every day. Schrader has two tattoos in remembrance of his friend. The first is Budrovich’s birthday, in numeral symbols, on his neck.

“When people ask, it gives me the opportunity to share Justin’s story with others and what a kind and loving human he was,” Schrader said on Budrovich’s memorial website. “He was the most special person in my life, and I’m forever grateful to call him my brother.”

Schrader was overlooked out of high school ... and perhaps undervalued, Truman State head coach Gregg Nesbitt said. Standing 5-foot-9, his size wasn’t sought out by Division I schools in the area. Nesbitt’s son Kellen was on Schrader until he committed, fascinated by his two-way play and special teams prowess.

Schrader was the king of the backfield in Division II football. He rushed for 200 or more yards in five games last season while recording at least 100 yards in all but one contest. Everything was clicking for the St. Louis product.

But the end goal wasn’t to finish out his career with the Bulldogs — although the program was known for producing prolific running backs in recent seasons.

Schrader redshirted his freshman season while the understudy to Jordan Salima. Looking for an opportunity to continue his career, too, Salima entered the 2022 XFL Draft and also played in The Spring League.

“When he came into college, I didn’t know much about him besides the video-game-like high school numbers he’d put up,” Salima said. “Fast forward a little bit, and we were always in the lab working on our craft during the season.”

In Salima’s eyes, Schrader was always wanting to put more work in and striving to be the best. Schrader had a board in his room, and on it he listed his goals for the season.

“I walked in his room once and noticed it said ‘(Own) the Harlon Hill,’ which is basically the Heisman award for Division II,” Salima said.

And like Salima, Schrader had more to give. After entering the transfer portal following his fourth season, he committed to Missouri as a preferred walk-on Jan. 5. He bet on himself.

“Nothing has been handed to him,” Nesbitt said. “He’s willing to pick up a broom and earn his way, and Mizzou would certainly second that.”

Salima never noticed a lack of effort from Schrader. He just believed his former teammate needed an opportunity to show his talent. The mixture of Schrader’s talent and work ethic is what produced his success.

Schrader believed in himself, but to Missouri running backs coach Curtis Luper, he wasn’t a household name. Resorting to Google, Luper learned more on the records Schrader set at Truman State.

The transfer portal has become the norm, and for Schrader it has opened new doors. Nesbitt, 64, isn’t a portal guy, but he acknowledges it’s the world of college football today.

“In marriage, you say, ‘I do.’ You don’t say, ‘I’ll try,’” Nesbitt said. “I’m gonna guess that the large percentage of those guys are done with Division II football and don’t know it. The grass isn’t greener; you’re not moving up.”

But Schrader was the exception.

Schrader talked openly with Nesbitt regarding a decision to enter the transfer portal. Schrader was looking for the opportunity he sought out in high school, searching for the Division I experience he had always thought he was capable of reaching.

“I’ve had a work ethic and an obsession with football that’s probably a little unhealthy for most,” Schrader said. “I’ve really shut off a lot of aspects of my life — social lives and different stuff like that outside of football — because I have been so obsessed with the game of football.”

Once the decision to enter the portal was officially made, Nesbitt was all hands on deck to facilitate any way he could. Now watching his former running back take the lion’s share of carries for an SEC program, Nesbitt isn’t surprised.

“What folks don’t realize is there are, I think, infinitely more players than there are scholarships,” Nesbitt said. “And let’s face it, recruiting is an unscientific process. You can’t measure the human heart, but you can measure character and competitiveness, right?”

Nesbitt sees Division I players across the Division II landscape. From being late bloomers to being overlooked, like Schrader, talent resides at lower levels, grasping for a chance to make an impact.

“He just wanted to contribute any way possible,” Luper said. “He’ll stick to it and consistency has shown (that). He’s the same today as when he walked in here in January.”

Schrader has shown persistence and toughness to his coaches, along with being raved about for his availability. Luper went down a list of his running backs two weeks ago that missed time this season because of injury and/or illness, and Schrader wasn’t on that list.

“There’s just a level of toughness he possesses that you won’t find out that he has until he gets hit in the mouth,” Luper said.

Schrader has been available all season, furthering a quality his former coach highlighted. Nesbitt added that he doesn’t recall one practice Schrader ever missed. While he pointed to luck for good health, Nesbitt raved about the process Schrader takes, from recovery to diets to flexibility.

“I think that he could internalize and utilize his competitive chips on his shoulder in a positive manner,” Nesbitt said. “He’s keenly aware of (his body) — not (just) a little bit. So he takes pretty good care of it.”

Although standing as the first running back option in Missouri’s scheme, he didn’t know how far his availability would carry him.

“I didn’t see myself, a year ago, being in this situation,” Schrader said.

Schrader not only made himself stand out at Truman State, but he also positively impacted Nesbitt’s career. With a team looking to extend each season past fall, Schrader was at the front of the charge.

“As a competitor, when you have a guy like that, listen, you’re either going to work with him or you’re going to become irrelevant,” Nesbitt said.

Schrader is an elite competitor in Nesbitt’s eyes. And yet, Schrader almost didn’t play football. His father had big baseball dreams for his son, leaving him to believe an injury from football would end any chance of continuing that path.

Schrader didn’t start playing football until eighth grade. And given his smaller size, he didn’t meet the initial weight requirements to be a running back.

“I finally got to run the ball one time, and I think my first carry went for 70 yards with one shoe off,” Schrader said. “I think (my dad) kind of realized, ‘Maybe he can do this and be pretty successful at it.’”

Beyond this season, Schrader has one year of eligibility left. The running back is set for a second season with the Tigers in 2023 under scholarship. And beyond the game of football, he looks to secure a masters in business from Missouri next year.

“His attitude is infectious,” Nesbitt said. “If he can stay relatively injury-free, I think that he’ll get an opportunity to play at the next level.”

Nesbitt believes Schrader’s willingness to play anywhere on the field, especially on special teams, will carry his career. It’s a belief he held when Schrader was at Truman State, and Nesbitt sees Schrader’s continued success at the SEC level only bolstering the running back’s chances of continuing his career.

From playing through a torn-off jersey and rushing for 200 yards to playing for someone other than himself, Schrader is not only admired for his toughness but also for his heart, which he’s stretched from the field to his friendships.

At LSU, Kelly's 'process' gets credit for Tigers' turnaround