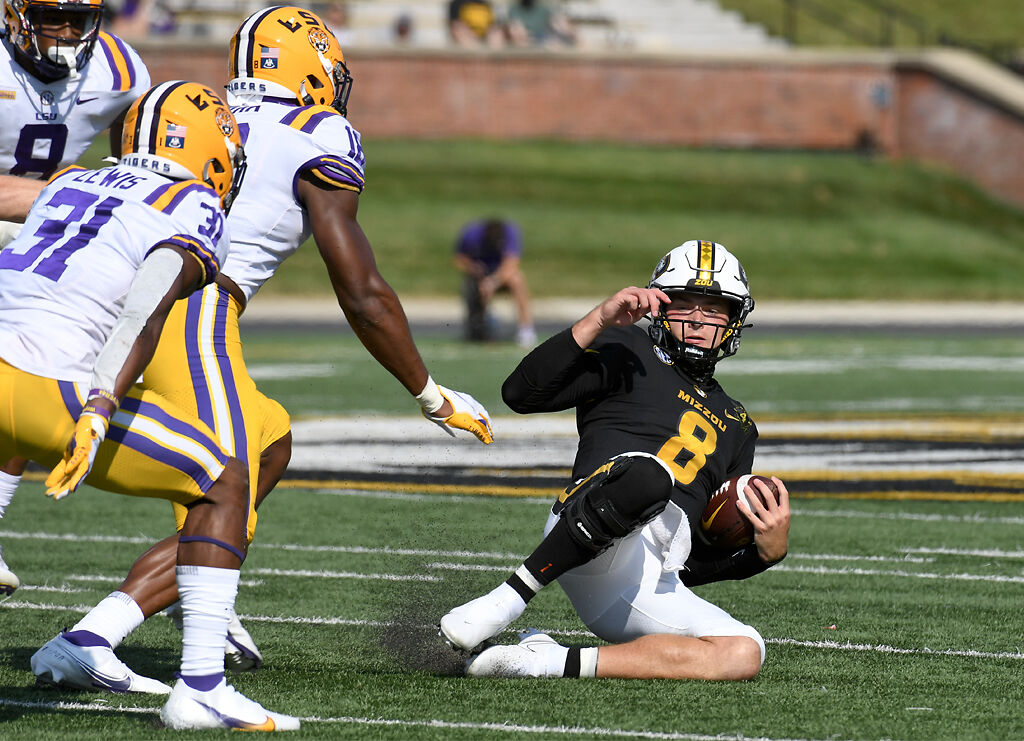 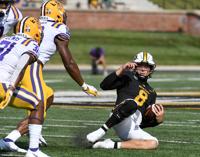 Quarterback Connor Bazelak slides as LSU linebacker Damone Clark and safety Cameron Lewis defend during the first half of Missouri's game against LSU on Saturday in Columbia. Bazelak's 4-touchdown performance came with trick plays and misdirection, as three of his touchdown throws came on play action passes. 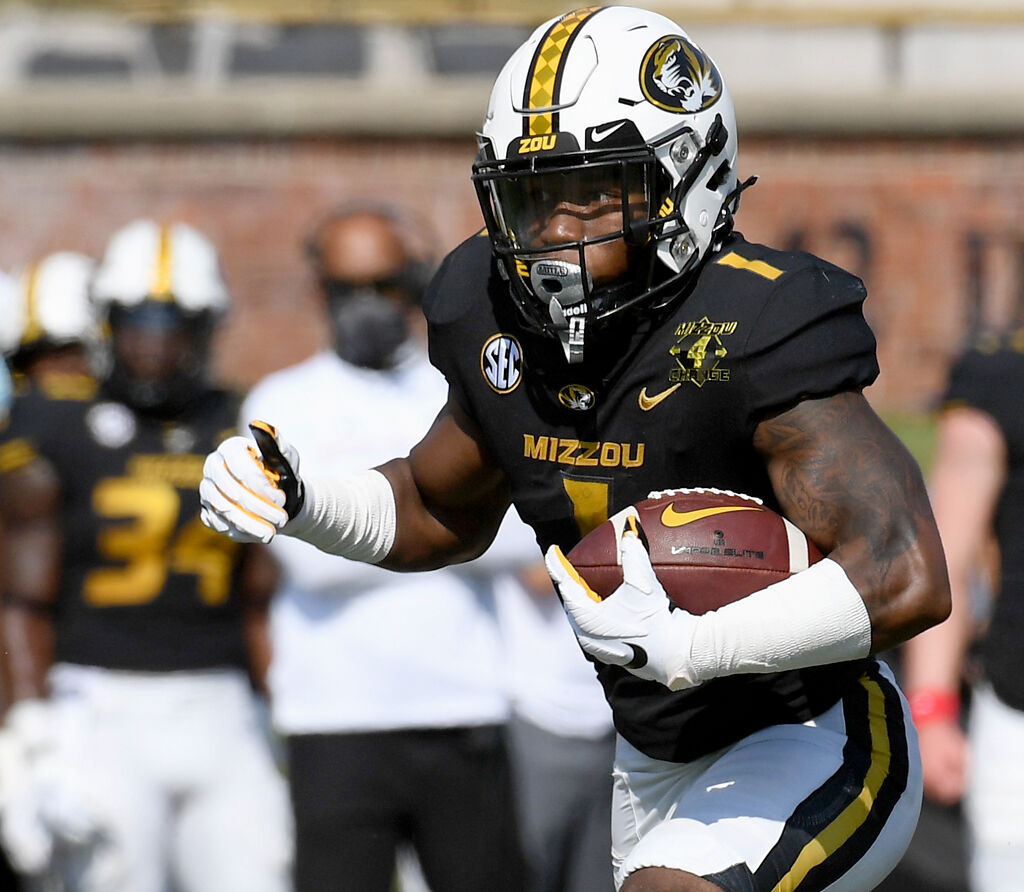 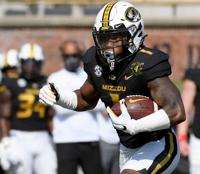 Running back Tyler Badie runs for a touchdown during the first half of Missouri's game against LSU on Saturday in Columbia. Badie, running back Larry Rountree and receiver Jalen Knox combined for 177 rushing yards in Saturday's win.

Quarterback Connor Bazelak slides as LSU linebacker Damone Clark and safety Cameron Lewis defend during the first half of Missouri's game against LSU on Saturday in Columbia. Bazelak's 4-touchdown performance came with trick plays and misdirection, as three of his touchdown throws came on play action passes.

Running back Tyler Badie runs for a touchdown during the first half of Missouri's game against LSU on Saturday in Columbia. Badie, running back Larry Rountree and receiver Jalen Knox combined for 177 rushing yards in Saturday's win.

Despite being announced as the starter earlier in the week, Connor Bazelak wasn’t the only quarterback to take the field for the first Missouri offensive drive.

As the redshirt freshman went under center for the Tigers’ first snap of the day, quarterback Shawn Robinson lined up directly behind him.

Then, Bazelak went in motion to his right, lining up in the slot. Robinson took a couple steps forward, but instead of taking the snap, he went in motion to his left and lined up wide. Running back Larry Rountree, who was directly behind Robinson, stepped up and took the snap for a 3-yard gain.

That trickery was just the tip of the iceberg in Saturday’s 45-41 win over the defending national champion LSU Tigers. Missouri’s creativity and its ability to establish the run allowed it to come out on top in an offensive shootout with the Bayou Bengals.

The Tigers of Columbia established creative play-calling early as — three plays after Rountree’s direct snap — Bazelak handed it off to the senior running back, only for him to toss it back to the quarterback, who found receiver Tauskie Dove downfield. The redshirt sophomore caught the pass over two defenders and walked into the end zone for Missouri’s first points of the game.

"I feel like it opened up everything,” receiver Jalen Knox said of the play. “ … Now they're scared about, 'Alright, what can they do deep?' And then we start coming with all the underneath stuff, got good runs and all the jet sweeps and everything.”

Knox, who had a 16-yard jet sweep touchdown run Saturday, said those plays are “like second nature” and that the variety they bring to the Missouri offense is “just too much stuff to try to pay attention to.”

Doing too much for LSU to pay attention to proved to be true in the second half, as two of Missouri’s three second-half scores came on play action passes. LSU coach Ed Orgeron said the most notable thing about MU’s offensive performance was its misdirection and it showed itself in key spots, especially as it was established early.

Even when the Tigers missed on another attempted flea flicker later in the first quarter, the motion did its part. Bazelak handed it off to Rountree, who tossed it to receiver Barrett Banister for an end around, who tossed it back to Bazelak for a near completion to tight end Daniel Parker.

Three plays later, Bazelak took a snap and ran to his left, then pitched it to Knox, who ran for 6 yards and picked up a first down. On the next play, Bazelak and the offense ran a play action pass that found Boo Smith on a quick pass to the left. He picked up 7 yards.

“They’re trying a lot of unique stuff off the bat here to keep LSU off their game,” Dave Flemming said on the ESPN broadcast after the play.

The misdirection continued on Missouri’s third drive. After a 3-yard run from Rountree, Bazelak set Smith in motion on the next play to set up trips left. However, the quarterback made a read and scrambled for 3 yards. It led to a score that was indicative of the Tigers’ whole offensive performance.

On the next play — a second-and-7 from the LSU 29 — Bazelak once again called Knox in motion from the right. What could’ve been an end around was instead a handoff to running back Tyler Badie, who got a massive hole from the offensive line. After breaking a tackle at the second level, the junior had open space and a 29-yard touchdown.

“We couldn’t stop the run game,” Orgeron said. “I thought their running back was a little bit better than we gave him credit to. He had an outstanding game.”

Orgeron didn’t directly say which running back he was referencing, but it was likely Rountree, as he finished the game with 119 yards on 18 carries. Badie and Knox both had impactful rushing performances, too. Badie only had 39 yards, but he average 7.8 yards a carry, and Knox’s 16-yard rushing score marked tangible success with the end around for the Tigers.

LSU’s Myles Brennan had arguably his  best stat line of the season, throwing for 430 yards and four scores, and Bazelak’s 406-yard, 4-score performance cemented him as Missouri’s QB1. His 15-pass streak of completions was impressive, too, and he ended 29-of-34 through the air, with an efficiency rating of 224.4 — it was sixth-best in program history. However, the rushing performances were night and day.

Rountree was Missouri’s lone 100-yard rusher, but Badie and Knox’s scores made a significant difference. In total, the trio had 177 yards rushing on 27 attempts, which meant they averaged 65 yards a carry. LSU struggled to get 49 yards on the ground, and it averaged just 2.5 yards an attempt.

Where Orgeron said Missouri’s defense was packing the box and making the Bayou Bengal’s run game ineffective, Rountree gave the bulk of his team's rushing success to the offensive line.

“Every hole that they opened up, it was wide open,” Rountree said. “So I had to ... take my business and make the second guy miss. They did a phenomenal job.”

Missouri pulls off the first big win of the Eliah Drinkwitz era, using a huge defensive stop at the end to secure a 45-41 victory in a shootout with LSU.