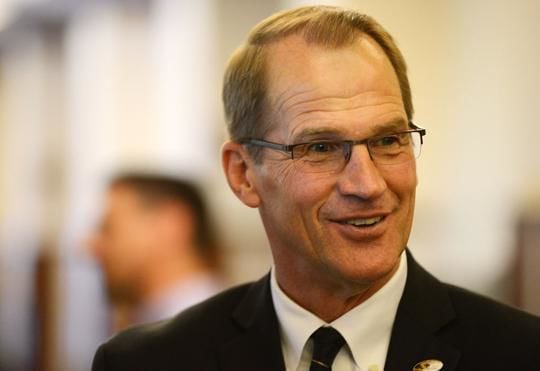 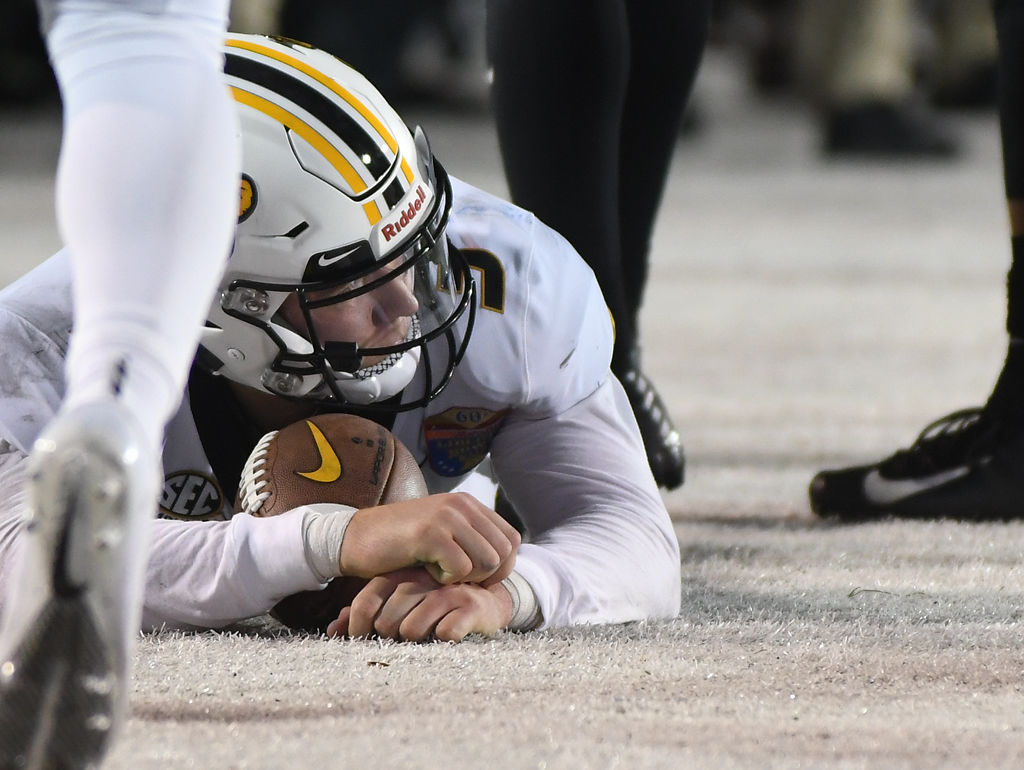 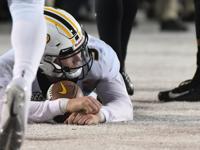 Missouri quarterback Drew Lock lays on the ground and looks at the field after falling out of bounds with about a minute left on the clock on Dec. 31 at the 60th AutoZone Liberty Bowl in Liberty Bowl Memorial Stadium in Memphis, Tenn. A ban on 2019-20 postseason play for the Missouri Tigers means that the team will not be permitted to participate in a bowl game next season. 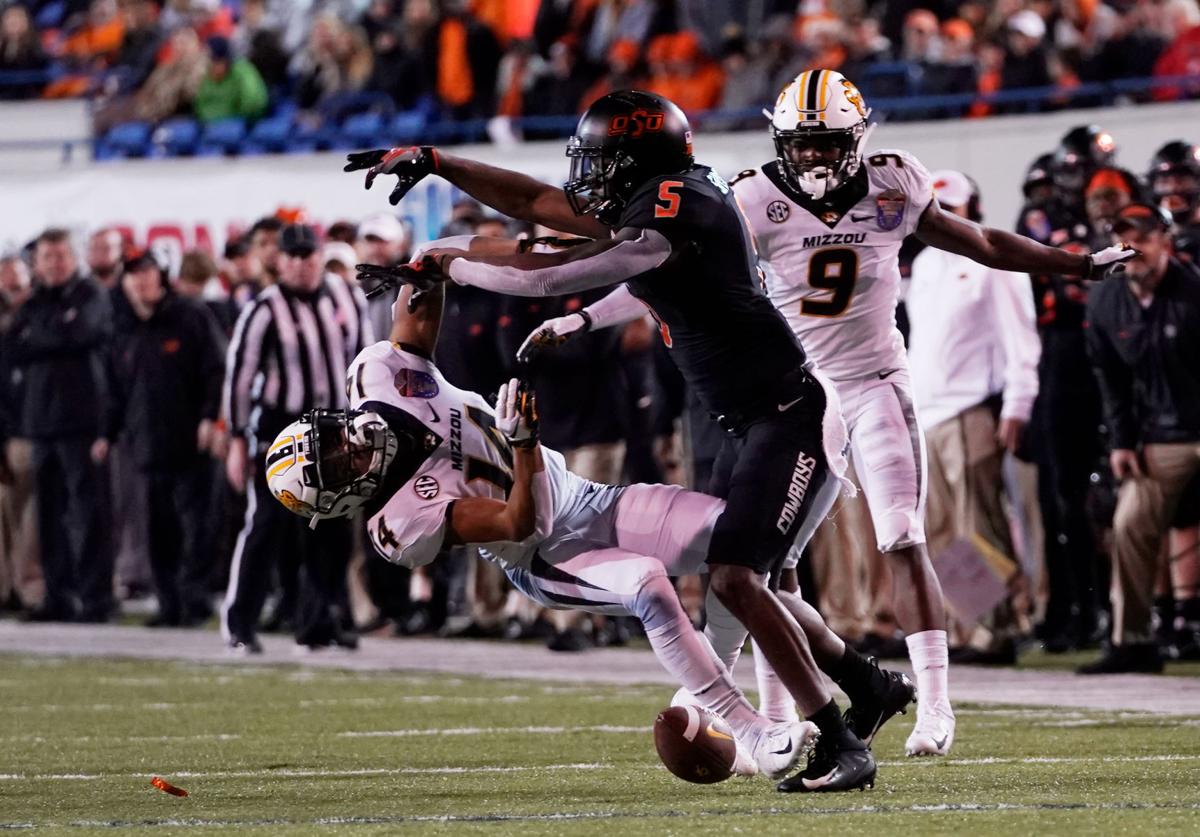 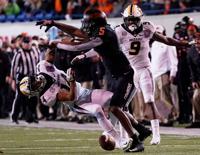 Missouri quarterback Drew Lock lays on the ground and looks at the field after falling out of bounds with about a minute left on the clock on Dec. 31 at the 60th AutoZone Liberty Bowl in Liberty Bowl Memorial Stadium in Memphis, Tenn. A ban on 2019-20 postseason play for the Missouri Tigers means that the team will not be permitted to participate in a bowl game next season.

Missouri’s football program will be barred from participating in any postseason play next season, among other penalties, as a result of an investigation into academic fraud within MU Athletics, the NCAA’s Committee on Infractions announced Thursday morning.

A panel for the committee found in the investigation that former MU tutor Yolanda Kumar, though not named in the report, completed coursework for 12 student-athletes, violating the NCAA ethical conduct, academic misconduct and academic extra benefits rules.

Missouri Director of Athletics Jim Sterk condemned the committee’s decision and said in a statement late Thursday morning that the school would appeal the decision. He later spoke with reporters on a conference call, during which he said “we expect to win that appeal.”

Sterk said Missouri has retained outside counsel and will be represented in the appeals process by Mike Glazier, a collegiate sports lawyer.

“I think, like our culture is, we’re going to do it the right way. I think through the appeals process we’re going to have an opportunity to correct this,” Sterk said. “We were just surprised. We thought there might be a probation period and maybe vacating wins. The current student-athletes that were involved with the tutor have sat out, so we took appropriate action at that time. So we felt like we were doing the right thing at that point in time so that in the end, the penalty would not be as severe.

“I was shocked and dismayed by the penalties.”

David Roberts, a spokesman for the NCAA Committee on Infractions, said on a conference call with reporters that the appeals process will “obviously take several months,” and Sterk said he expects it to take months or even half a year. The Committee on Infractions has a 110-day timeline for any appeal findings as a baseline, but its website says appeals can take longer than that.

Kumar, the former tutor, was unnamed in the report because she “repeatedly threatened to breach confidentiality” throughout the interviewing process in the investigation, Roberts said.

Kumar aided most of the 12 athletes in online coursework that included quizzes, exams and other assignments, according to the report. It also claims she completed an entire math course for one of the athletes and did two others’ work on placement exams. The report also says the tutor assisted six of the athletes in coursework from other schools.

The investigation found that Kumar felt pressured to make sure the athletes passed courses, but the investigation “did not support that her colleagues directed her to complete the student-athletes’ work.”

Kumar didn’t reply to the Missourian’s request for comment, but Thursday night she broke her silence with a series of tweets detailing her version of her involvement, which she says exceeds the 12 athletes involved in the report.

Among Kumar’s claims are that she completed homework and took exams in an online algebra course for former Missouri quarterback Maty Mauk. When Mauk was suspended from the team, Kumar said she was told to stop helping him by Tami Chievous, associate athletic director for academic services. Chievous is also the wife of Derrick Chievous, the men’s basketball program’s all-time leading scorer and a former first-round NBA draft pick.

Kumar continued to say in the tweets Thursday evening that she took a math placement exam for former Tiger defensive lineman A.J. Logan, who was known to be one of the 12 in the report. Kumar said Logan told Kelsey Lovell, a former academic coordinator for the athletic department, that he took the exam himself.

Kumar also said the late Heather Morris, who was the athletic department’s director of enhanced learning, arranged for former offensive lineman Brad McNulty to take a personal finance exam with an instructor, among numerous other claims.

Since she left the school in November 2016 — she was a math and statistics tutor for MU athletics — Kumar has openly made allegations of her involvement in academic fraud. Kumar later told the St. Louis Post-Dispatch she assisted as many as 42 MU athletes in some form of academic fraud, primarily for athletes from the football and men’s basketball teams. However, the men’s basketball team was not accused of any violations in the report released by the Committee on Infractions.

In March 2017, Kumar offered to sell evidence of the counts of academic fraud so she could pay off $3,000 in debt to the university and receive her transcript to apply for graduate school.

In the unethical conduct violation, the unnamed tutor (Kumar) was given a 10-year show-cause penalty, meaning she cannot be hired by another NCAA institution in an athletics-related role during that time.

“Missouri did the right thing,” Roberts said. “It self-reported. It acknowledged and accepted responsibility.”

The report drew comparisons to past academic fraud within the University of North Carolina-Chapel Hill athletic department. North Carolina enrolled more than 1,400 student-athletes in courses over 18 years that required them to do little-to-no actual coursework and were given passing grades. The university maintained denial of any misconduct in its case because non-student-athletes were allowed to enroll, and it never received any postseason bans or vacated wins, instead being sentenced with a year of probation.

Despite the report itself showing a comparison between the two cases, Roberts said he wouldn’t compare the cases when asked about it.

Asked if the severity of MU’s consequences after self-reporting incentivizes athletic departments to not cooperate or to lie about infractions, Roberts reiterated that he would not compare cases.

“One could certainly make that argument,” Roberts said. “The converse would be that hopefully more institutions accept responsibility as Missouri did.”

MU’s most recent postseason violation was in 2016 for Kim Anderson’s men’s basketball team. It was banned from the 2016 postseason and forfeited two scholarships among self-imposed sanctions for a sham internship program and impermissible benefits received by players and their families at a resort at Lake of the Ozarks. The NCAA accepted MU’s self-imposed sanctions that August.

Here is a full list of penalties Missouri was given Thursday:

Read the NCAA Committee on Infractions' decision on the academic violations committed at the University of Missouri.

The series of events leading up to Missouri's NCAA sanctions

A series of tweets from Kumar on Thursday evening detailed the role she claims she played in fraudulently helping a number of athletes with their coursework.

College football players left in limbo as seasons get pushed

Players unite in push to save college season, create union