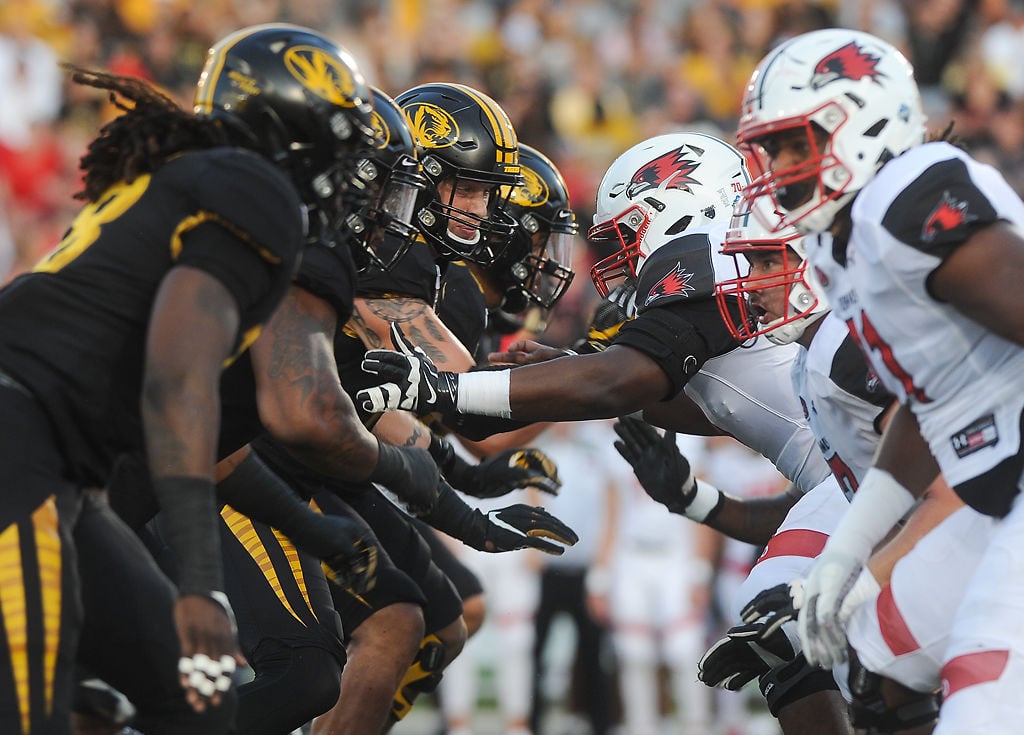 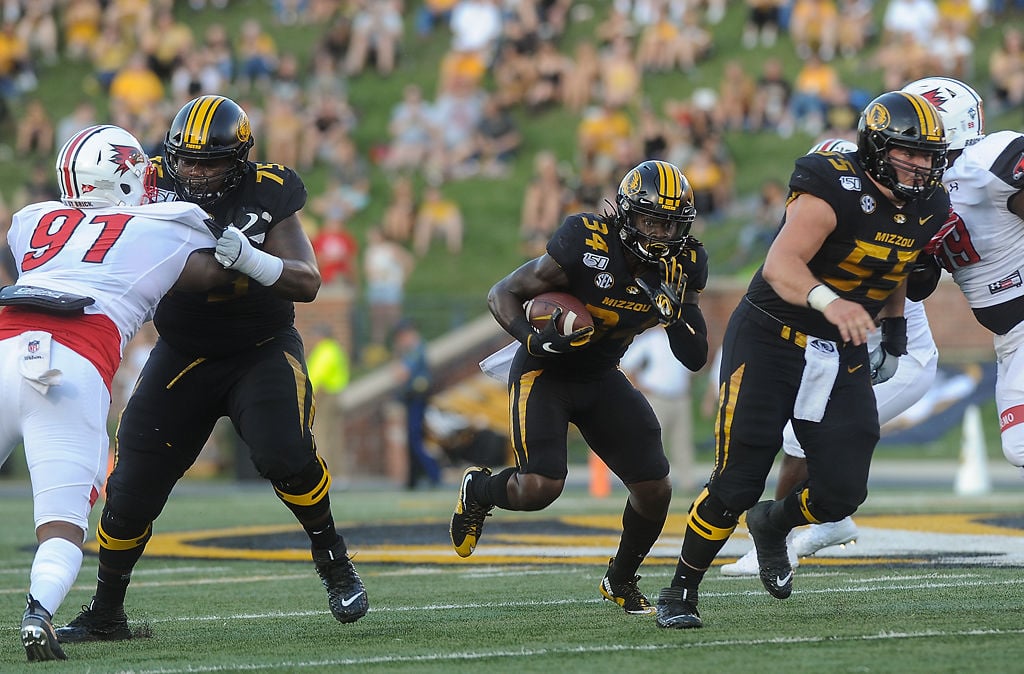 Running back Larry Rountree III reads his blockers as he advances a run to the second level during the University of Missouri’s game versus Southeast Missouri State University on Farout Field at Memorial Stadium on Saturday. 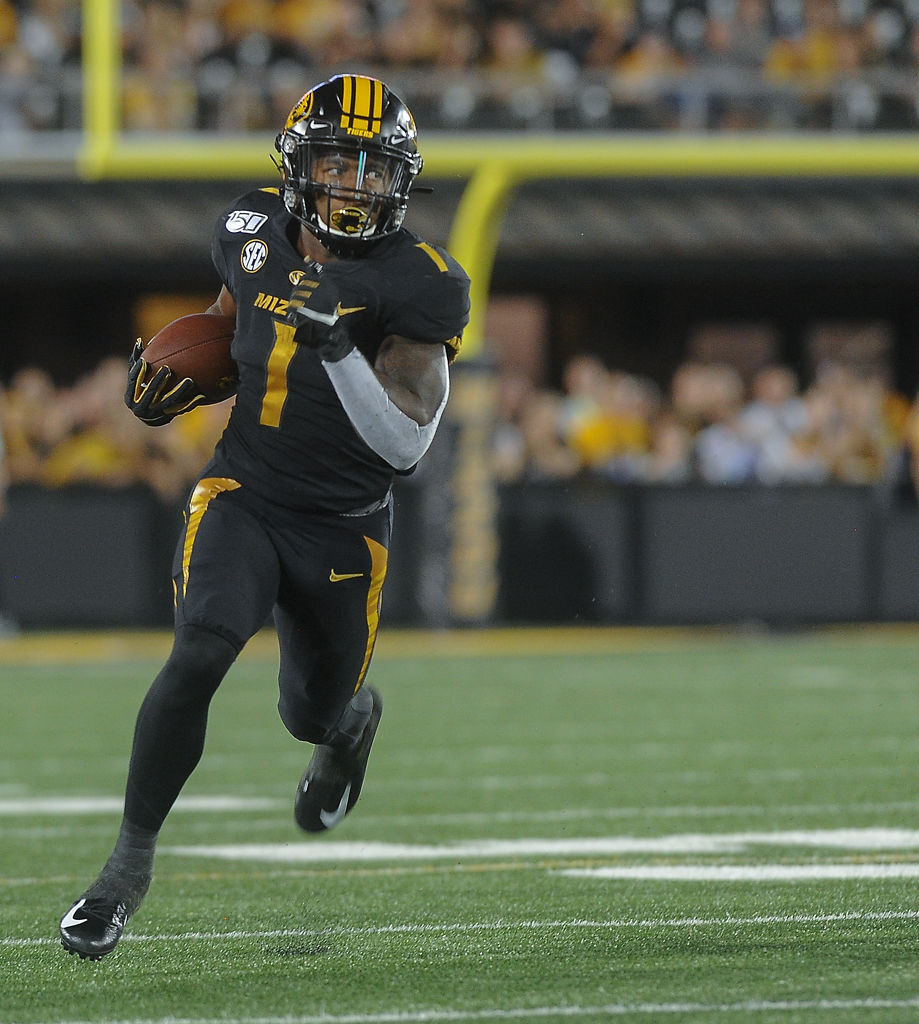 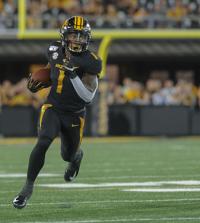 Running back Tyler Badie searches for a defender while running through the open field as the University of Missouri took on Southeast Missouri State University on Farout Field at Memorial Stadium on Saturday.

Running back Larry Rountree III reads his blockers as he advances a run to the second level during the University of Missouri’s game versus Southeast Missouri State University on Farout Field at Memorial Stadium on Saturday.

Running back Tyler Badie searches for a defender while running through the open field as the University of Missouri took on Southeast Missouri State University on Farout Field at Memorial Stadium on Saturday.

There’s no shortage of ways in which Missouri coaches can deploy running backs Larry Rountree III and Tyler Badie against opposing defenses.

Badie can take most of the third down snaps while Rountree runs into games in more traditional running situations that call on a back with size. The Tigers can also call on Badie to take handoffs in short yardage situations while asking Rountree to catch passes. Through three games, each running back has shown the ability to complete all of those tasks.

But what is the best way for the Tigers to use them?

“I don’t know,” Rountree said. “That’s a good question, though. Tyler, he’s a speed guy. Tyler is speed. I am more, people would look at me and (former Missouri running back Damarea Crockett) and think he was more power and I was more finesse, but it was the opposite. Crock is more finesse and I am more power. I try to juke here and there. I don’t know.”

There doesn’t have to be a definitive answer, and it will vary based on situational football. But so far, through the first quarter of the season, the running back duo has shown it has the ability to be a two-headed monster.

And we have learned that Missouri can and will use them in a variety of ways.

Look no further than their numbers.

Offensive coordinator Derek Dooley said after the first game that he wants that number to be at least 4.5 yards per carry. Both running backs are past that mark.

When it comes to catching the football, Badie has an edge. He’s caught 11 passes, five more than Rountree. But Rountree is tied with starting receiver Jonathan Nance in receptions. So, Rountree provides value there.

The dual abilities that the running backs have will present a challenge for Southeastern Conference opponents, starting this upcoming week against South Carolina. The flexibility Badie and Rountree have make it so dynamic that defenses can not determine run or pass solely based on which running back is lined up in the backfield.

Missouri certainly has shown it is not afraid to use each runner how it sees fit.

The rest of the offense will roll from there.

“Coach (Cornell) Ford always says the game starts with us,” Badie said. “So we know we have to be the most physical team out there.”

Here’s what else we have learned through the first quarter of the season:

Missouri likes to roll out its 11 and 12 personnel the most of any groupings. Wide receivers Jonathan Nance and Jalen Knox almost always take the field in those moments.

Of all offensive plays the Tigers have ran thus far, Nance has been on the field for 73% of them. Knox has played in 65%. No other offensive player outside of quarterback Kelly Bryant has logged more than 50% of the snaps.

Knox is a second-year receiver and Nance arrived in Columbia this offseason as a grad transfer from Arkansas.

Nance caught two touchdowns in the season opener against Wyoming.

“You see why we wanted him,” Dooley said before the West Virginia game. “He has worked really hard from spring until now. He deserved the success he had.”

But despite all of the snaps, the two receivers have not put up eye-popping numbers. Knox has yet to catch a touchdown and Nance has only snagged five catches.

Missouri seems to like the duo more than any other receivers on the roster. That much is clear by the number of snaps. But the Tigers will likely need more production from their top two snap recipients in SEC play.

If tight end Albert Okwuegbunam catches a pass, make sure to watch until the end of the play. There’s a good chance it ends in a touchdown.

He has caught only seven passes so far, but three have gone for scores. It’s clear he doesn’t need high volume to get rolling in a game. All Okwuegbunam needs is for Bryant to give him a shot and Okwuegbunam will likely be ready to turn it into six.

The whole D-line Zou mantra has felt like a thing of the past in recent seasons. The sacks haven’t been there like they were in the days of Shane Ray and Markus Golden or even Charles Harris.

Sometimes that can be indicative of what is or isn’t behind the defensive line in the linebackers and defensive backs. That certainly plays a role. But overall, the big men up front have underwhelmed in recent memory.

That seems to be starting to change though, if the past two games are any indication. Defensive end Chris Turner has two sacks over that span, which ties his total from last season. Defensive tackle Jordan Elliott dominated in the middle against Southeast Missouri State too.

Still, the defensive line as a whole has not pummeled opponents week in and week out.

Starting with South Carolina, this defensive line has a chance to show it can join the ranks of great Missouri defensive lines. Or, it could just be another group that gets forgotten.

The first three games didn’t give a strong indication of which way this group will go. SEC play will provide much more clear answers.

Punter/kicker a successful experiment for McCann

Even Missouri coach Barry Odom said he was not sure how senior Tucker McCann would handle the kicking and punting workload.

So far, McCann has proven more than capable.

He has made five of six field goals, one of which went for 52 yards.

While punting, a first for McCann this season, he has booted six of the 14 over 50 yards. His long is 62 yards, which he hit against SEMO.

McCann has proven reliable in both roles for Missouri through three games. If he can continue this consistency, that will take one significant area of potential worry off Missouri’s plate heading into SEC play.

No high-fives? No spitting? MLBers adjust in COVID world

NBA teams at Disney had tough travel-party decisions to make