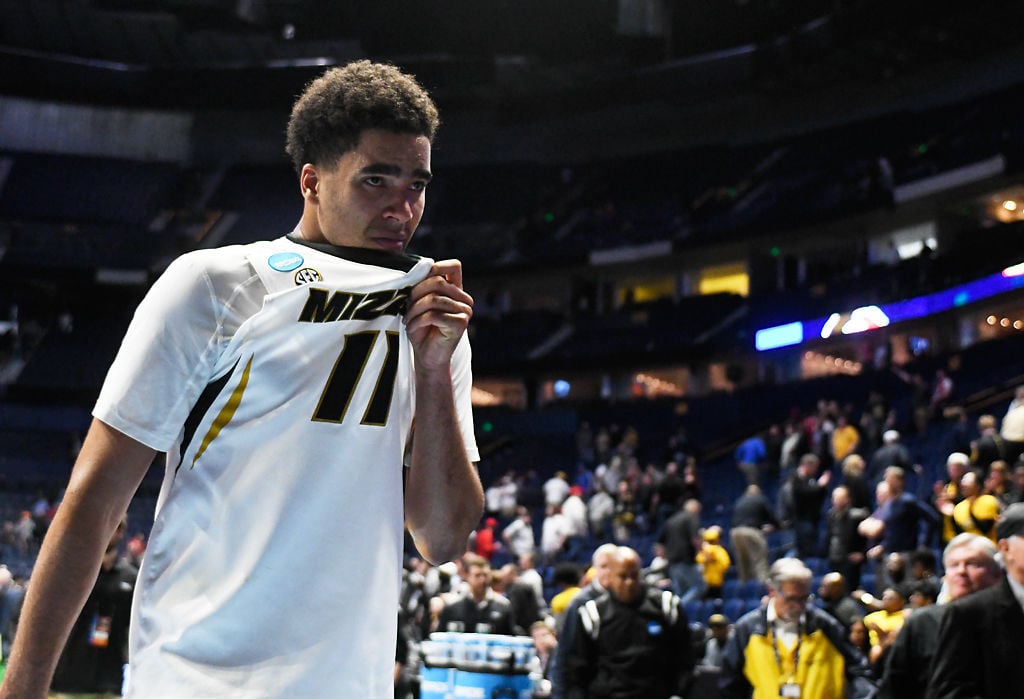 Missouri forward Jontay Porter walks off the court after Missouri’s loss to Florida State in the first round of 2018 NCAA Tournament in Nashville, Tenn. Porter tore the ACL and MCL in his right knee during a private scrimmage on Sunday. 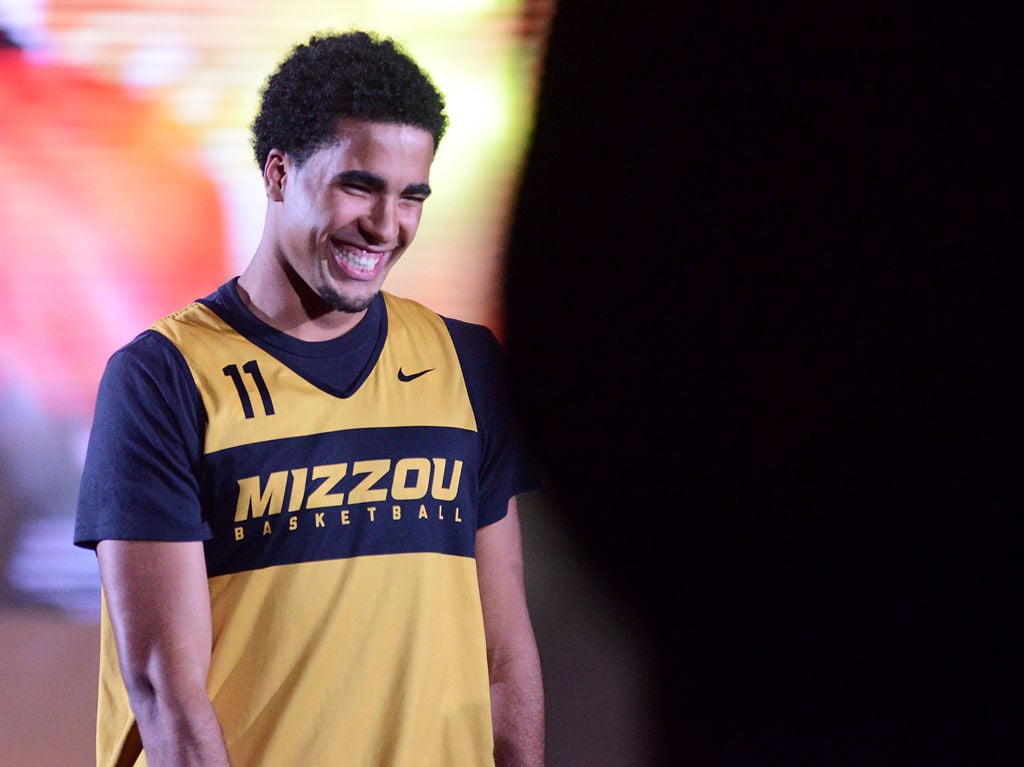 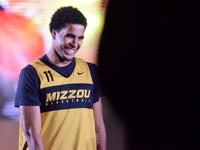 Sophomore Jontay Porter laughs as he walks on the court during the Mizzou Madness event on Saturday at Mizzou Arena. Porter tore his ACL and MCL in his right knee during a private scrimmage Sunday.

Missouri forward Jontay Porter walks off the court after Missouri’s loss to Florida State in the first round of 2018 NCAA Tournament in Nashville, Tenn. Porter tore the ACL and MCL in his right knee during a private scrimmage on Sunday.

Sophomore Jontay Porter laughs as he walks on the court during the Mizzou Madness event on Saturday at Mizzou Arena. Porter tore his ACL and MCL in his right knee during a private scrimmage Sunday.

Lisa Porter was in Denver, Colorado, visiting her son Michael Jr. when she received a phone call from her husband, Michael Sr., an assistant coach for Missouri men’s basketball.

The news Michael Sr. had for his wife was of the crushing variety, and just about everybody in Columbia soon became enlightened as well: Missouri sophomore Jontay Porter had torn his ACL and MCL during a private scrimmage against Southern Illinois on Sunday.

“I just started tearing up right away. It was devastating to all of us,” Lisa Porter, Jontay’s mother, told the Missourian. “Immediately, Michael Jr. got on the phone with Jontay, then his dad, then Cierra did. We were all separated but together in spirit. It was too much to imagine him having to go through this.”

Porter’s season-ending injury came at the worst possible time, as the 6-foot-10, 240-pound forward was gearing up for what many predicted would be a breakout season. He averaged 9.9 points and 6.6 rebounds per game as a freshman last season, but forewent the NBA Draft — where his older brother Michael Jr. was taken 14th overall by the Denver Nuggets — and returned to his hometown of Columbia to continue his career at Missouri.

After Mizzou Madness on Saturday, during which he dunked the ball on several occasions, Porter said his knees felt healthy. It showed.

But now, the Tigers — worst case scenario realized — must find a way to move forward.

It’s a monumental setback for Missouri, which was projected to finish ninth in the SEC in the media’s preseason poll but will now have to field a downgraded roster. His absence means the roles of forwards Kevin Puryear and Jeremiah Tilmon are that much more important, and bench players who were in developmental roles now figure to get increased minutes for the Tigers.

Analysts around college basketball weighed in on Missouri’s mire.

“It’s a brutal blow, both for Jontay and this Missouri team,” Peter Burns, a studio anchor for SEC Network, said in an email to the Missourian. “Tilmon will now have to become the low post presence and focus more on rebounding and still pick up the slack in scoring. Honestly, I would guess Cuonzo tries a smaller lineup with more aggressiveness now instead of being able to control down low with the two dynamic bigs. Puryear will likely have to go from more of a planned distributor to a scorer, which is a role I think he’ll adapt well into.”

A smaller lineup could be a viable option for Martin, as Puryear and Tilmon could slide to the 4 and 5, respectively. However things shake out, Porter’s absence likely means increased minutes for forwards like Reed Nikko, Mitchell Smith and even walk-on Parker Braun. It also means the timelines for Missouri’s young guards have been moved up, and they’ll be expected to produce sooner rather than later.

“I mean, Tilmon has to be really, really good,” Goodman continued. “He’s got to be a dominant, dominant player. To me, he can’t have off nights. He’s going to have to be dominant with very little margin for error.”

All considered, finishing ninth in the conference now seems like a stretch for Missouri. A team aspiring to make the NCAA Tournament for the second straight year will likely struggle to do so.

“Missouri was probably a fringe NCAA Tournament team at the end of the day, and now I’d be shocked if they made the tournament,” Goodman said. “Before, I think you could have picked them between sixth and 10th in the SEC. Now, you’re probably looking at an NIT team.”

Such a confounding loss will surely have implications for other teams in the SEC, as they won’t have the burden of preparing for the versatile Porter. But coaches around the league expressed shock and gloom when discussing the situation.

“I think our whole program feels awful for Jontay (Porter), for the Missouri team and for his family,” Vanderbilt head coach Bryce Drew said. “It’s a great family, and there’s no doubt in my mind he’ll come back even stronger when he’s healthy. I know Cuonzo’s a great coach, so he’ll find a way to make his team successful.”

John Calipari, the famed head coach at Kentucky, was told of Porter’s injury Sunday following Kentucky’s Blue-White Game. Visibly upset, he closed his eyes and lowered his head into the microphone before giving his response.

“I haven’t eaten yet, and now I’m nauseous,” Calipari said.

Calipari then made a connection between Porter’s situation and that of former Wildcat Nerlens Noel. In 2013, Noel tore his ACL during a game against Florida and missed the rest of that season. Kentucky was an NIT team that year and lost its first-round game to little Robert Morris of the Northeast Conference.

“I remember getting on the bus when Nerlens (Noel) blew his knee out, and we were coming back from Florida. We knew he did it, and he was on the plane,” Calipari said. “I came up to him and hugged him, and he just started bawling. I mean literally bawling, and I’m telling him, ‘You’re going to be fine. This is going to kill our team.’”

Ricky O’Donnell, a college basketball editor at SB Nation who writes NBA mock drafts, had Porter at No. 11 on his latest 2019 mock draft, which he wrote last June. He said Monday that Porter’s name certainly wouldn’t be called that early if he still decides to declare for the 2019 draft.

“I guess now, for Jontay, if he got taken in the first round that would be huge. Would a team take him in the first round? It’s possible. It depends how teams evaluated him last season,” O’Donnell told the Missourian.

With many months standing between now and June’s NBA Draft, one might think that Porter has time to prove himself and get back into the lottery. After all, Michael Porter Jr. did just that last season. But O’Donnell said Jontay Porter won’t have that luxury.

“It takes 12 months to recover from an ACL injury, and it’s probably going to take him even longer because he isn’t a particularly impressive athlete,” O’Donnell said. “I don’t think he’ll be able to show anything by April.”

But Porter’s chance to be a lottery pick is not over. He may just have to wait.

O’Donnell is high on Porter. He frequently compares the sophomore to the Nuggets’ Nikola Jokic, who is currently tearing up the NBA at just 23 years old. Because of that potential, O’Donnell thinks Porter will make it back toward the top of his mock draft, as long as it’s the 2020 edition.

The news of Porter’s injury was surprising and devastating to many. Missouri basketball fans were not excluded. Nat Kaemmerer is an MU senior and basketball season ticket holder who was blindsided by the injury.

“I saw a tweet about it, and I was like, this absolutely can’t be true. … He’s a hard-worker, and I was really feeling for him,” Kaemmerer said.

But not all hope is lost, Kaemmerer said.

“You just have to try to get past it,” Kaemmerer said. “You have to try to look deeper into the roster and see who’s going to be the guy to step up next.”

This situation is becoming far too common for the Porters. First, Lisa Porter watched her oldest daughters, Bri and Cierra, medically retire due to injuries. Then, she watched Michael play just three games because of back surgery in his homecoming at Missouri last season. What could it possibly be like to watch this happen to your children time and time again?

“I don’t know how to put that into words,” Lisa Porter said.

Somehow, Through all of this, the ever-positive Jontay Porter is looking at the bright side.

“Even last night, (Jontay) said to me on the phone, ‘I don’t want to be in a place of feeling sorry for myself. I know somehow this’ll be good,’” Lisa Porter said.

Addison Potts committed to Missouri in eighth grade. Where is she now?