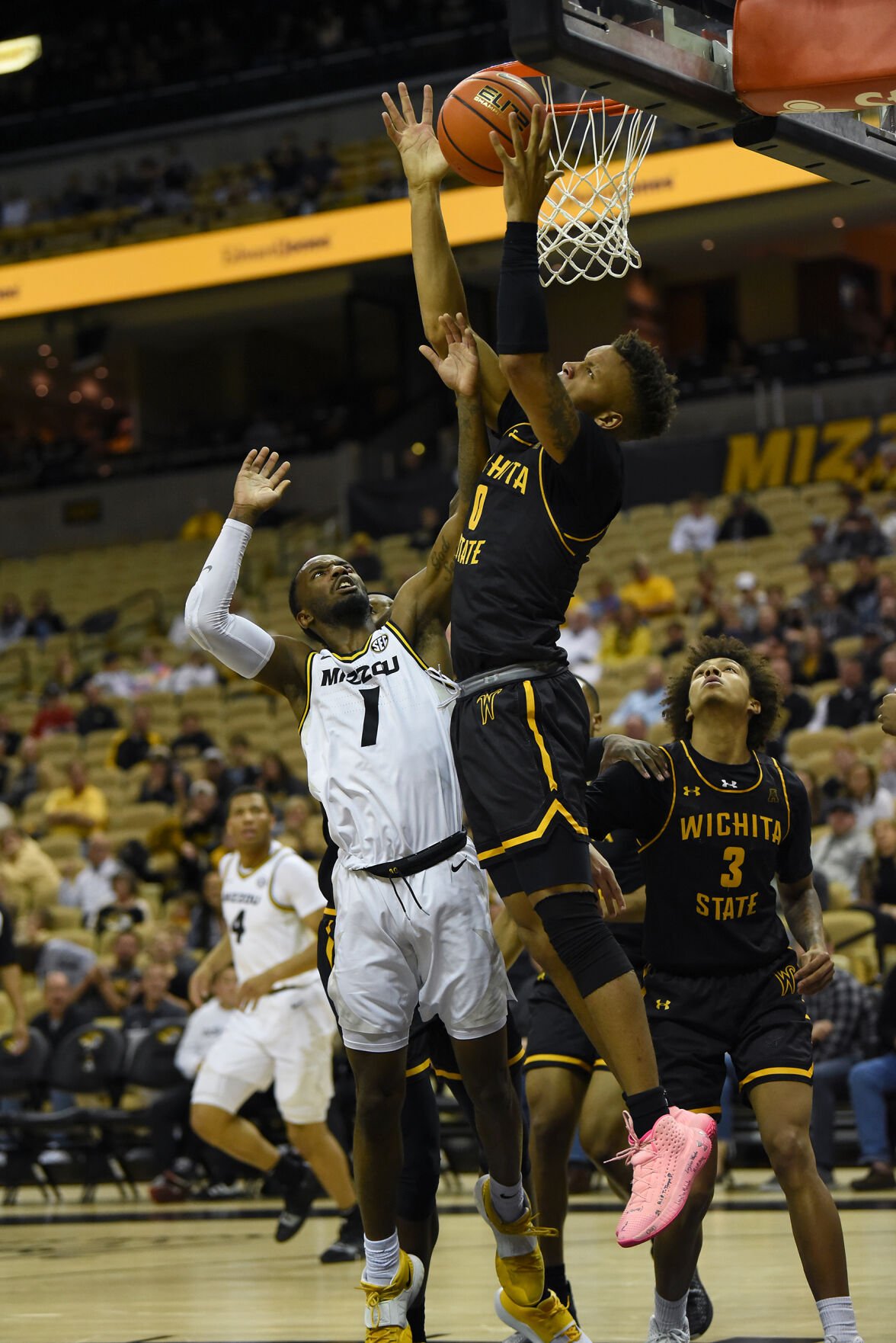 Wichita State guard Dexter Dennis beats Missouri guard Amari Davis to catch the rebound Friday at Mizzou Arena in Columbia. Missouri had a total of 35 rebounds while Wichita State had 41 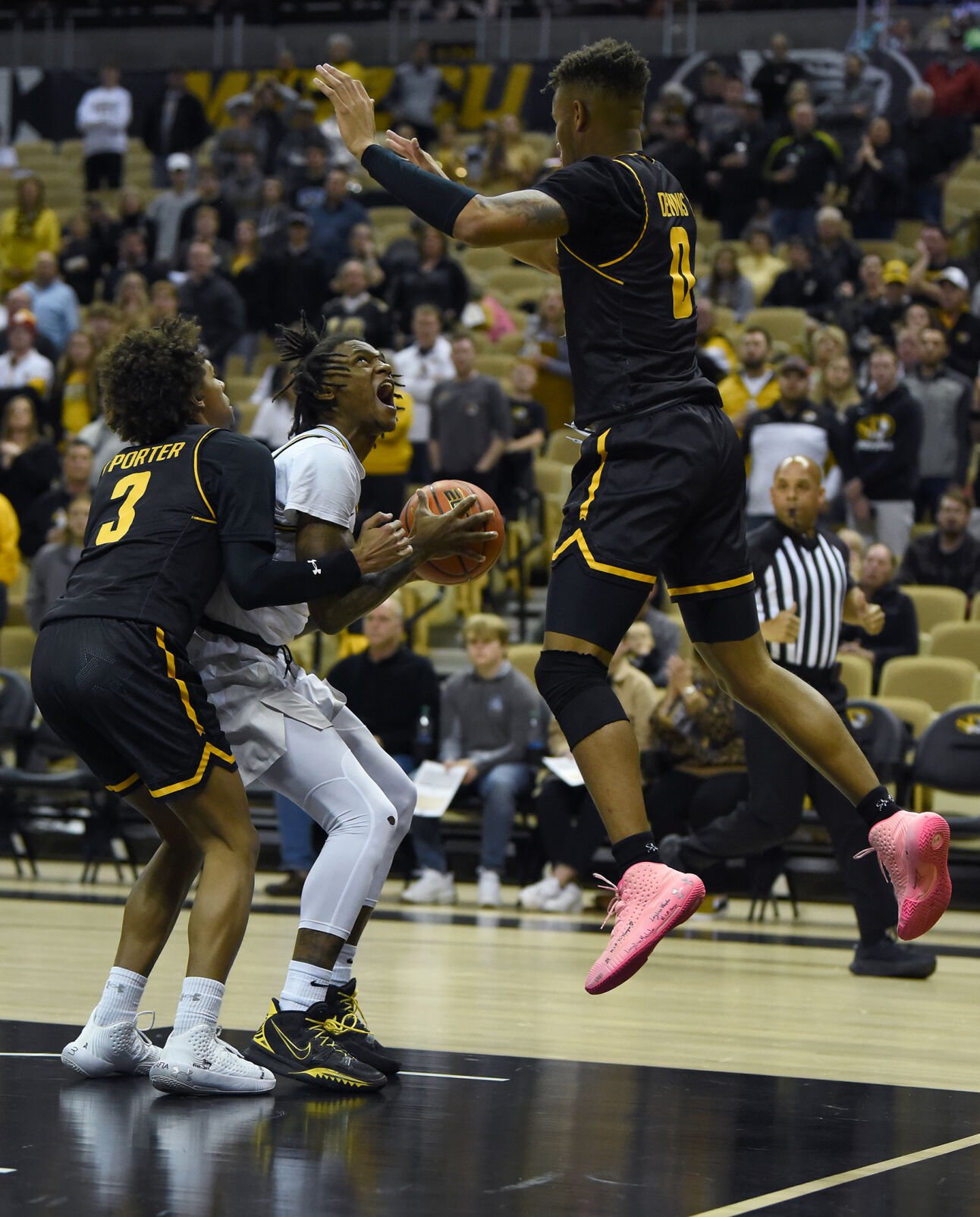 Missouri guard DaJuan Gordon yells as he prepares to shoot the ball Friday at Mizzou Arena in Columbia. Gordon made two of his five field goal attempts against Wichita State.

Wichita State guard Dexter Dennis beats Missouri guard Amari Davis to catch the rebound Friday at Mizzou Arena in Columbia. Missouri had a total of 35 rebounds while Wichita State had 41

Missouri guard DaJuan Gordon yells as he prepares to shoot the ball Friday at Mizzou Arena in Columbia. Gordon made two of his five field goal attempts against Wichita State.

It's becoming commonplace for Missouri to have poor nights from the field, at the charity stripe, behind the arc and really anywhere else on offense. At this point, an average shooting night for most teams may well be an exceptional night for the Tigers.

In the 61-55 loss to Wichita State, Missouri shot just 34.8% from the field, making an abysmal 2 of 18 from the 3-point line. The Tigers' first hit from 3 came midway through the second half from Jarron Coleman, before Amari Davis hit the second — and final — one on the next possession. It was Missouri's worst shooting performance of a bad shooting season.

In comparison, Wichita State shot 46.9% from the field and 35.3% from behind the arc. It wasn't a great night for the Shockers. It was just a worse night for the Tigers.

"You want those 3s to fall," Missouri coach Cuonzo Martin said. "If not, you're putting pressure on your defense to try to get stops."

These numbers are far from a new phenomenon.

The Tigers came into the game shooting just 41.4% from the field on the season.

Davis, who is starting to play better, led Missouri with 17 points. Coleman had 10, while season-leading scorer Kobe Brown finished with only eight, a quarter of which came from the free-throw line.

"The stage we play on is pressure automatically," Coleman said. ... "I tell everybody, 'Keep shooting,' because nobody's shooting it well, but all we can do is keep shooting and keep working on it. It's gonna fall when it falls."

Missouri only made five shots outside the paint.

"We got to the paint and we missed a lot at the rim," Martin said. "Of course you want to make shots, but we take pride in the numbers of how many times we got into (the) paint. ... Of course, we didn't capitalize as much as they did in the paint."

It wasn't an especially good night for the Shockers, either. Their 61 points is the second fewest they've scored this season, only behind 60 in their win over Jacksonville State.

Wichita State had 18 turnovers to Missouri's 12, but the Tigers couldn't turn those into points.

"You put so much pressure on yourself when you don't make those shots, especially when you turn them over 18 times and not capitalize on those opportunities," Martin said.

Tyson Etienne may well have been the difference between the two teams. On a quiet night, despite his game-high 18 points — 13 of which came in the second half — he made his presence known. With a representative from the New York Knicks in attendance likely to scout him, he went 7 of 17 from the field and 3 of 9 from behind the arc.

"He's a strong, physical guard because he can get in the paint and make plays," Martin said. "You don't want to allow a guy like that to get comfortable."

Missouri hosts Paul Quinn College on Monday. After that, three of the next five games are against teams that made the NCAA Tournament last season, which could mean trouble for the Tigers if they can't find a solution to their dismal shooting.

"We need to put two halves together," Davis said. ... "We just gotta play hard and execute for 40 minutes."

Auburn's ability to crash the offensive glass difference against Missouri