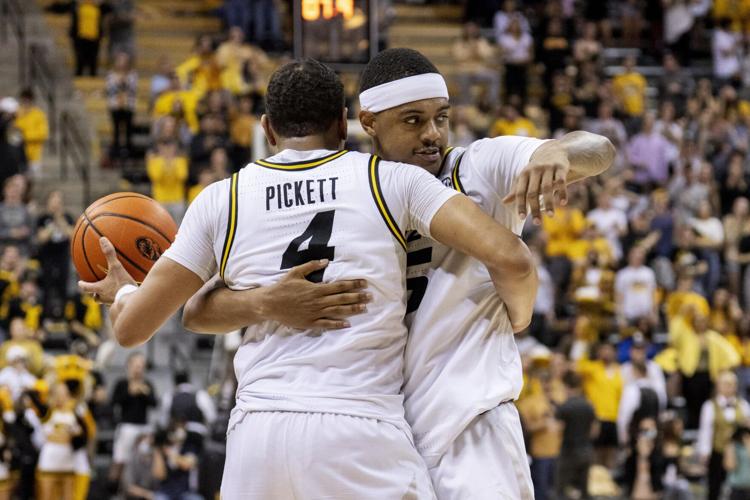 MU guard Javon Pickett, left, and Jarron Coleman, right, embrace during their 79-69 win over Georgia on March 5 in Columbia. Coleman is one of the six players from last season still currently with Missouri. 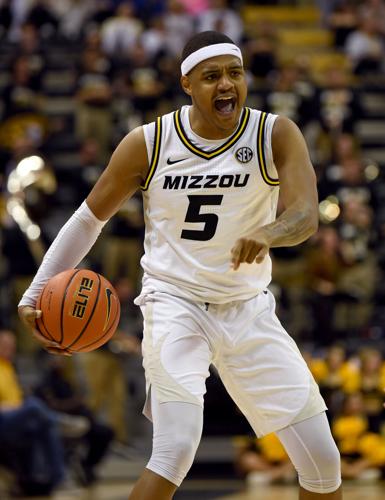 Missouri guard Jarron Coleman dribbles down the court in a game against Kansas City on Nov. 15 at Mizzou Arena in Columbia. Coleman won the MAC Freshman of the Year Award while at Ball State.

MU guard Javon Pickett, left, and Jarron Coleman, right, embrace during their 79-69 win over Georgia on March 5 in Columbia. Coleman is one of the six players from last season still currently with Missouri.

Missouri guard Jarron Coleman dribbles down the court in a game against Kansas City on Nov. 15 at Mizzou Arena in Columbia. Coleman won the MAC Freshman of the Year Award while at Ball State.

After averaging 13.8 points a game along with a 48% shooting percentage in his sophomore season at Ball State, Jarron “Boogie” Coleman decided to leave his home state of Indiana and transferred to Missouri. In a disappointing 12-21 season in Columbia, Coleman’s offensive statistics took a step back, posting an average of 8.6 points on 36% shooting.

To make matters worse, the coach who recruited him to Columbia was fired just a day after the season ended. While fans had been speculating the coaching change all season, it wasn’t something Boogie saw coming.

Nonetheless, Missouri athletic director Desireé Reed-Francois decided to make a change at the coaching position from Cuonzo Martin. Despite a new coach coming to town to implement a new program, Boogie has shown no desire to make a change for his senior campaign.

“He’s 22 years old now, so I do like for him to have his own way of thinking,” Coleman Sr. said. Through daily communication with his son, Coleman Sr. says Boogie has had no thoughts on transferring.

“He’s in for the challenge. He didn’t leave Ball State to run from adversity,” Coleman Sr. continued. “He wants Missouri to be in the Final Four. He wants to experience it all. It’s what he transferred for.”

And if Boogie does want to accomplish those dreams for the Tigers, he is going to have to do it with the new big name in town — Dennis Gates.

While Coleman Sr. hasn’t met the new coach of Missouri yet, he has heard plenty about Gates from the local basketball figureheads in the Indianapolis area.

“(Gates) has a good report from everybody I talked to,” Coleman Sr. said. “I’m excited.”

Since Gates was hired March 22, he has been working effortlessly on the recruiting trail trying to reassemble a team that has been hit heavily with players transferring out for the second season in a row. Because of this, Gates hasn’t had the time to talk with players currently in the program as much as he would probably like to.

However, Boogie and Gates did manage to have a meeting where they discussed Boogie’s strengths and where Gates sees him fitting into the new team, Coleman Sr said. Despite the limited attention thus far, Boogie understands the importance of what Gates is focusing on at the moment.

“Right now he’s trying to get the roster together so he can have good summer workouts,” Coleman Sr. said. “I think he has his priorities in order. Right now, getting players is a priority, which makes sense to me.”

As for Boogie, he is hoping to have a bounce-back senior season after taking a step back statistically. To achieve that, he plans on getting better in the offseason at mastering what worked for him in his first season in the SEC.

“My son had some good games and I knew he could play at this level,” Coleman Sr. said. “Right now it’s just perfecting the craft. Now he knows what he can do, he’s going to dominate because he knows exactly where he’s most comfortable.”

Boogie had a season-high 18 points against then-ranked No. 15 Alabama in the upset win, with 12 of the 18 points coming from behind the arc. He had 14 games scoring in double-digits.

The Tigers’ fourth leading scorer from last season isn’t expecting any kind of handouts from the new staff. Boogie knows he is going to have to earn everything he gets, just like it was for him last offseason when he transferred to Missouri.

His experience at MU probably hasn’t been exactly what he planned for, but that isn’t going to stop him from taking on a challenge. And if there is one thing for sure, it’s that his father fully believes in him to accomplish his dreams.

“I’m excited for the challenge for him because I know he can do it,” Coleman Sr. said.

SEC could boast best QB crop of any conference in history

Progress made, but how soon College Football Playoff expands still up in the air