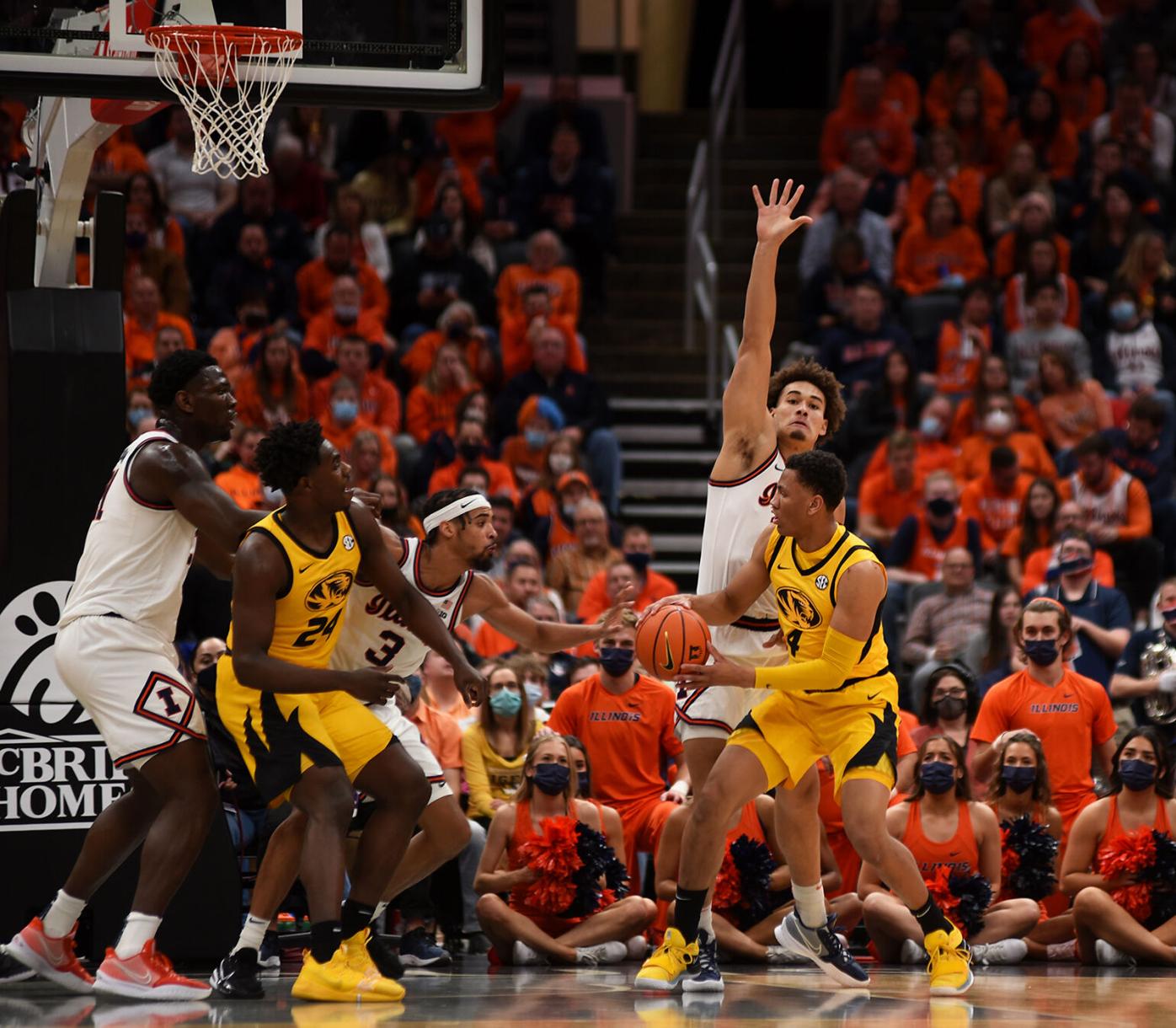 Missouri guard Javon Pickett looks to pass the ball to Kobe Brown on Wednesday at Enterprise Center in St. Louis. 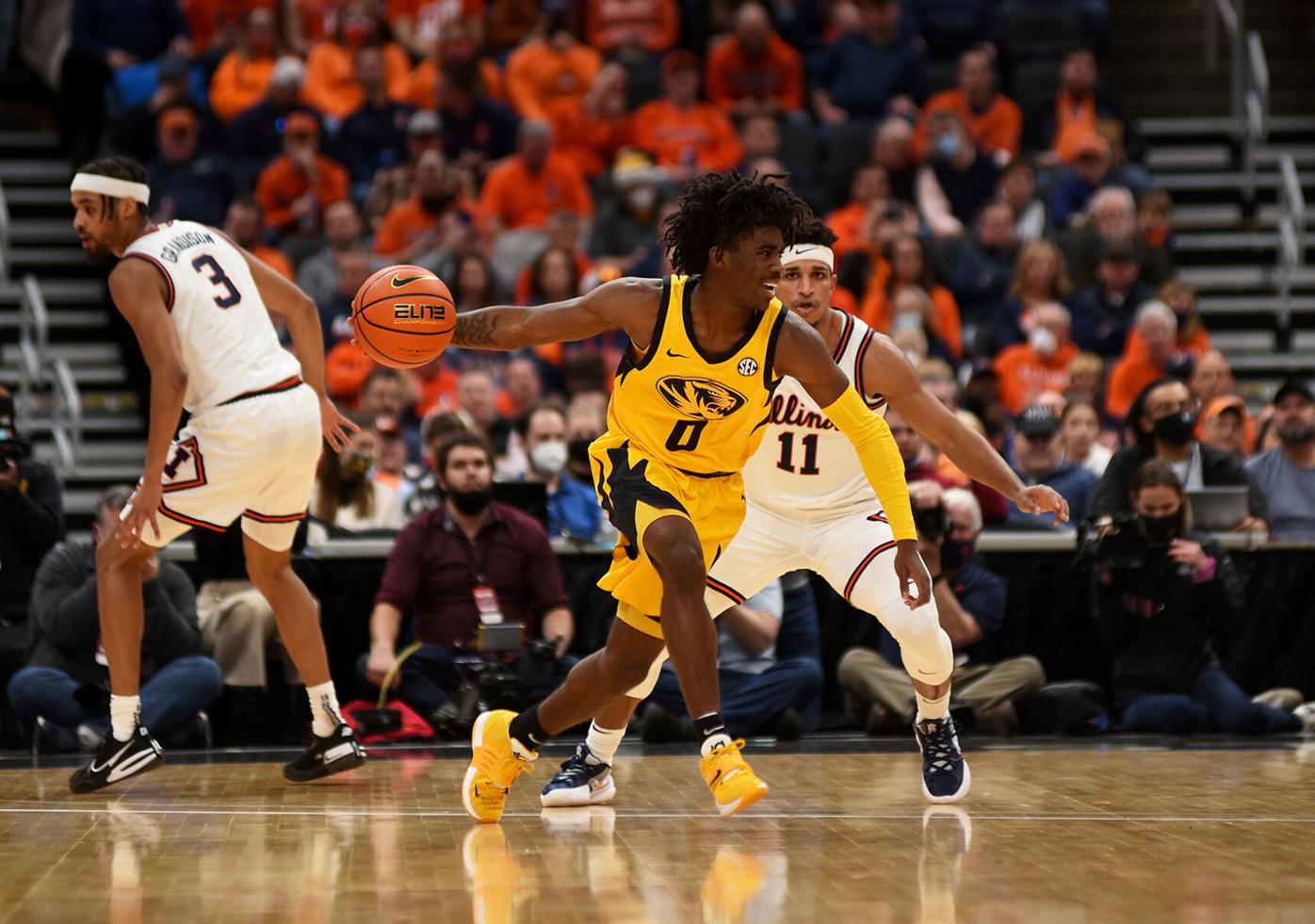 Anton Brookshire dribbles the ball as he looks for an open teammate Wednesday at Enterprise Center in St. Louis. Missouri plays against Illinois in the annual Braggin’ Rights game. 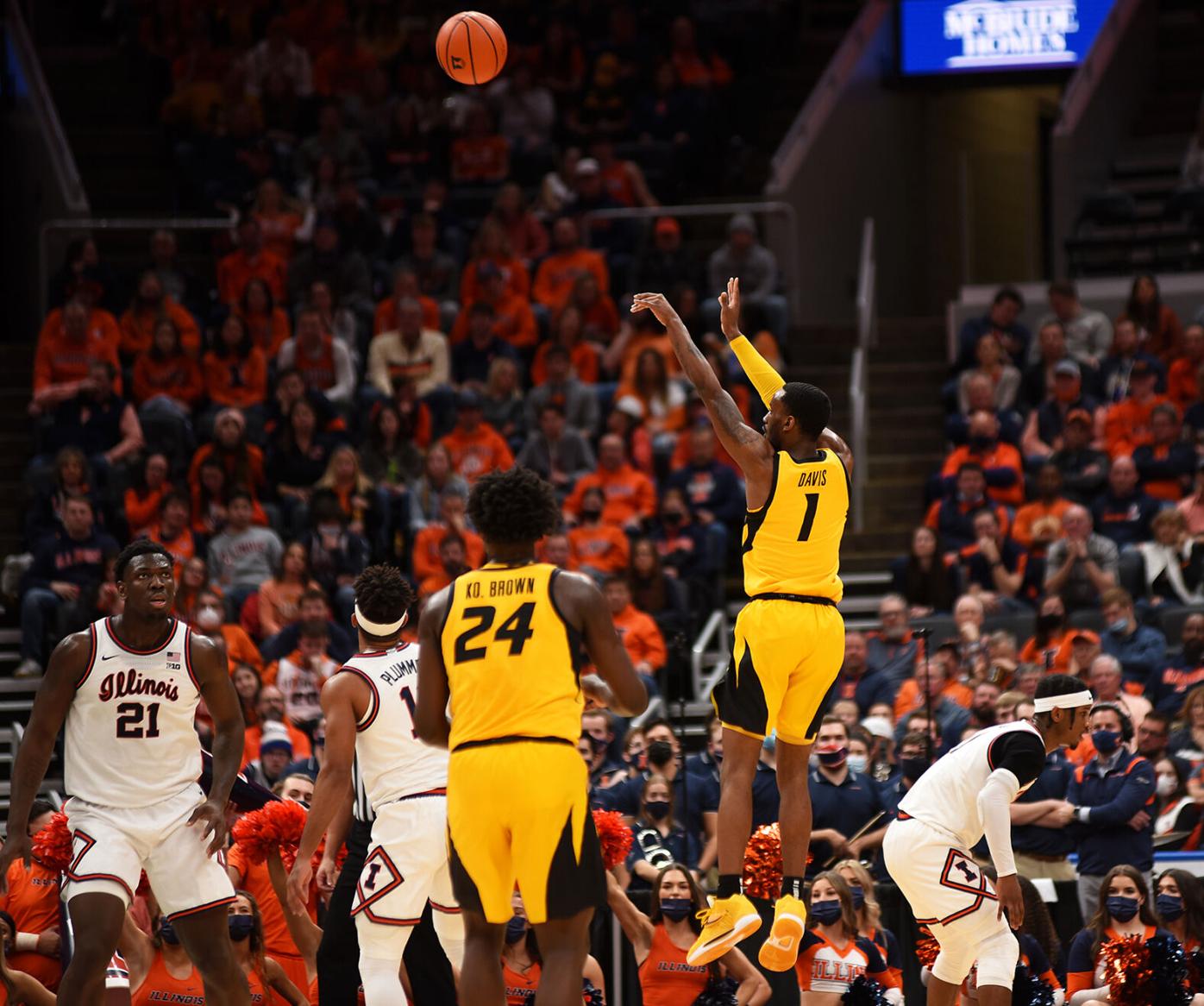 Missouri guard Amari Davis throws the ball in an attempt to make a basket Wednesday at Enterprise Center in St. Louis. This is the first time since the pandemic that the game took place in St. Louis, where it traditionally is held. 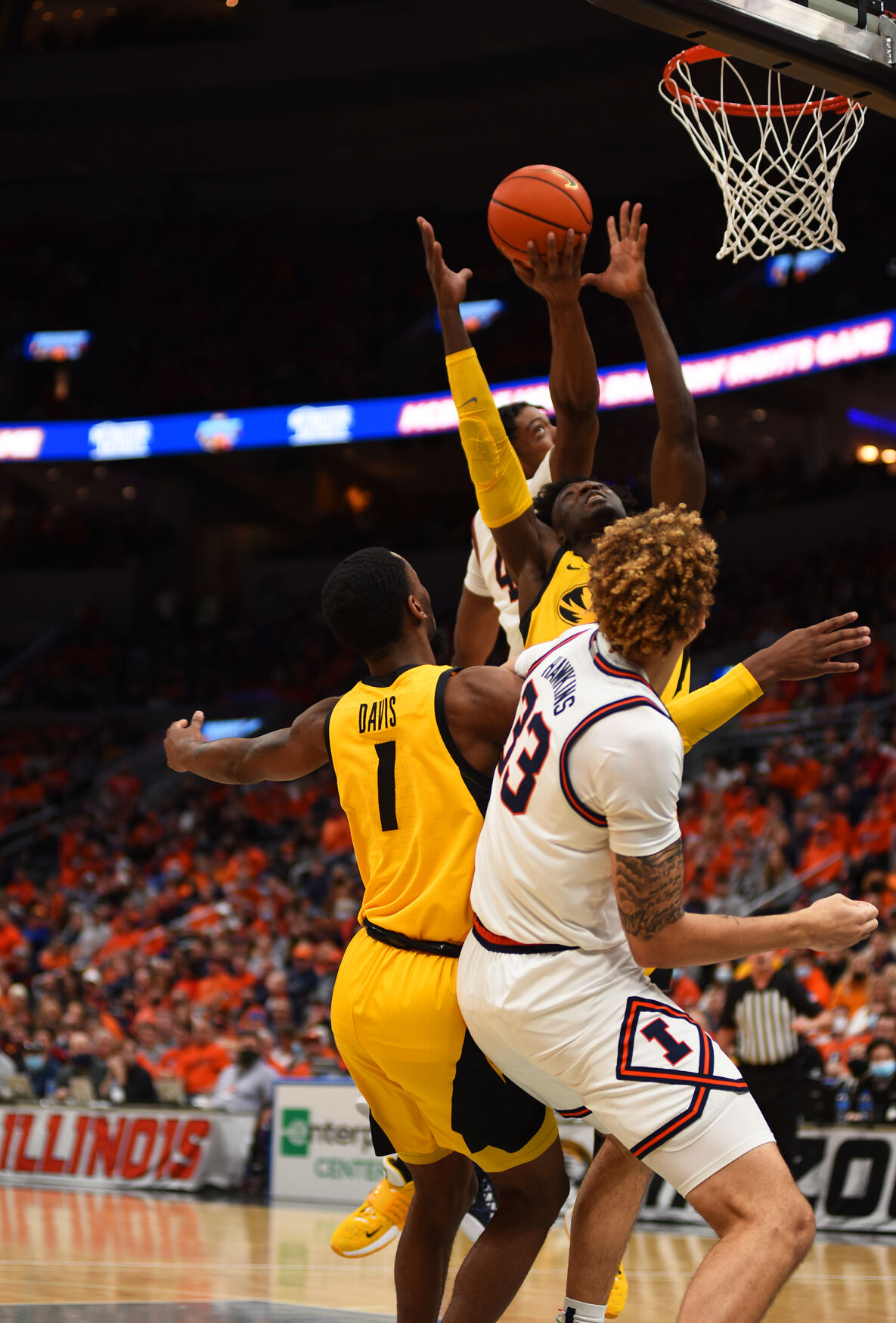 Missouri guard Javon Pickett looks to pass the ball to Kobe Brown on Wednesday at Enterprise Center in St. Louis.

Anton Brookshire dribbles the ball as he looks for an open teammate Wednesday at Enterprise Center in St. Louis. Missouri plays against Illinois in the annual Braggin’ Rights game.

Missouri guard Amari Davis throws the ball in an attempt to make a basket Wednesday at Enterprise Center in St. Louis. This is the first time since the pandemic that the game took place in St. Louis, where it traditionally is held.

ST. LOUIS — After three straight defeats to Missouri, the Illini finally had enough.

In a dominating fashion, the Illini beat the Tigers 88-63 on Wednesday night at Enterprise Center.

The senior guard was lethal from behind the arc, finishing with 15 points and shooting 6 of 10 from the field. Although only making six shots, the six makes shifted the momentum completely in the Illini’s favor.

And whatever Frazier ate for breakfast, so did the rest of the Illini. As a team, they shot 12 of 25 (48%) from behind the arc.

But Missouri’s Kobe Brown wasn’t going to go down without a fight. Similar to Saturday’s win against Utah, Brown took complete control of the Tigers’ offense.

Jumper, jumper, assist, two free-throws and then a dunk. In five-straight possessions, Brown sparked an 11-0 run to cut the deficit to six at 29-23.

Frazier had seen the Tigers find a way to get a gritty win too many times before. He had enough.

After the game, Frazier admitted that after the first made shot, he knew it was “show time.”

He didn’t let the halftime break cool him down either. After two jumpers and an assist to Plummer for a 3 in the second half, the Tigers now faced a 47-26 deficit.

“It’s just confidence,” Frazier said. “I tend to go on those little heaters where I feel like I won’t miss a shot.”

This run was one that Brown couldn’t overcome.

Brown finished with 13 points on 5 of 16 shooting and grabbed seven rebounds.

And once Missouri had to shift its defensive focus to stopping the long-range shot, the flood gates opened for Illini 7-footer Kofi Cockburn.

Cockburn finished with 25 points, but considering that Missouri coach Cuonzo Martin had no other option but to put a 6-foot-8 Brown on Cockburn, it wasn’t easy to contain him and it was only a matter of time before he exploded.

“I thought Kofi did a good job, but I also thought Kobe did a great job defending him,” Martin said.

“I just tried the best I could,” Brown said of guarding the big NBA draft prospect. “Once he gets down there, he’s a pretty big dude, so it gets really hard.”

The Tigers had to pick their poison: stopping Cockburn or stopping the 3-pointer.

But the Illini had no interest in slowing down at all.

Illinois shot 56.9% from the field throughout the game, including 33 points in the paint. The Tigers only had 23 points down low.

“I don’t think we were as aggressive as we needed to be,” Martin said.

In the last three Braggin’ Rights games, Javon Pickett averaged 15.6 points, way more than what he is used to.

Pickett never got going in his fourth edition of the rivalry, as he finished with three points on 1-of-8 shooting.

But he wasn’t the only Tiger to struggle. Amari Davis, who averaged 11.2 points before the game, had two points on a basket in the closing minutes of the game. He shot 1 of 7.

As a collective team, Missouri shot 36.5%, which included a 26.1% mark from the 3-point line. The Tigers only had six assists.

Despite the overall poor performance for MU, some unlikely players had good efforts.

Freshman Trevon Brazile was able to get four blocks on Cockburn. That’s a stat that not too many players can say they’ve achieved. Brazile finished with 11 points, five rebounds and six blocks.

“I love that Brazile kid, he played great for them,” Illinois coach Brad Underwood said of the freshman’s performance. “Very talented kid.”

And after missing the last rivalry game against Kansas, transfer guard Jarron Coleman came off the bench to provide some scoring for the Tigers, scoring 16 points.

It didn’t matter to Illinois coach Brad Underwood that his team held a 30-point lead for most of the second half, he still wasn’t going to take his foot off the gas.

“The feeling in the past three (games against MU) was horrible. I remember crying on the bus back and having a horrible plane ride back home,” Cockburn said.

Underwood kept the main offensive weapons in for most of the second half. Frazier and Plummer played 31 minutes and Cockburn played 29 minutes.

“I think this year is different, I’m way more happy and I think I’m going to have a really good flight back home,” Cockburn said.

With the last nonconference game of the season not exactly giving Missouri much confidence, it makes the possibility of beating No. 20 Kentucky at Rupp Arena that much more unlikely.

But for the second straight game, Brown showed his ability to take over a game when he drives to the rim with conviction. With some kind of formula for success finally being revealed for Missouri this season, it’ll be key for the Tigers to center the offense around Brown moving forward into SEC play.

And after the second straight blowout defeat to a rival in just a week and a half, Martin brought a message to the hurting Missouri faithful, “Stay the course, we will continue to grow” and “enjoy the holidays.”

Alabama motivated more than ever to beat Missouri