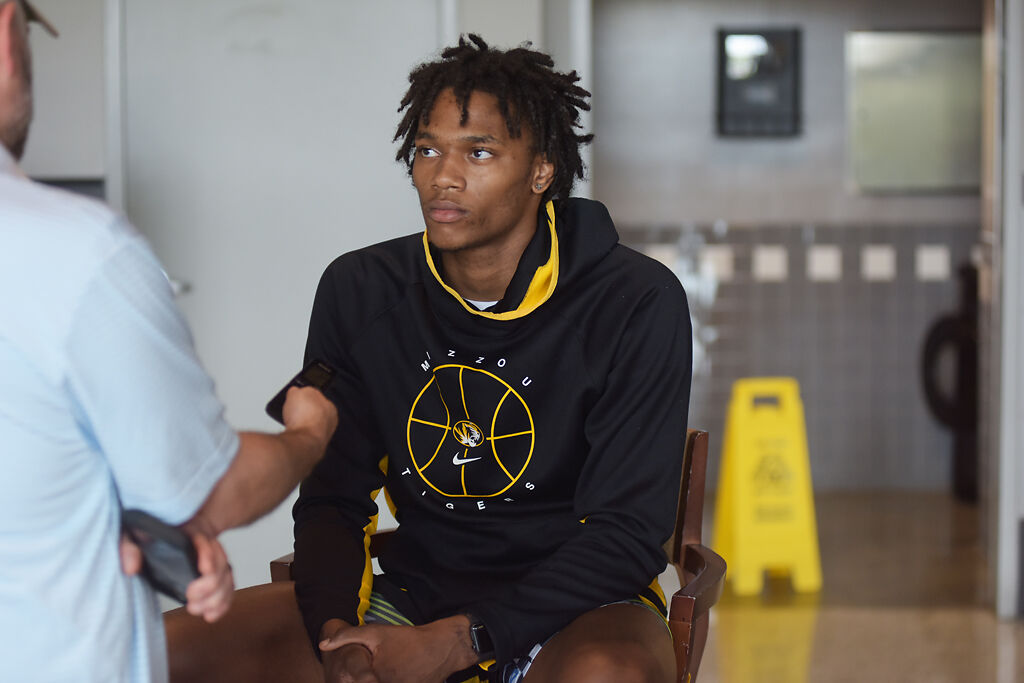 DaJuan Gordon talks to a reporter at a news conference to meet new student-athletes last Thursday at Mizzou Arena in Columbia. Last season Gordon started 22 of 25 games as a sophomore at Kansas State. He is one of four transfers who have joined Missouri this offseason. 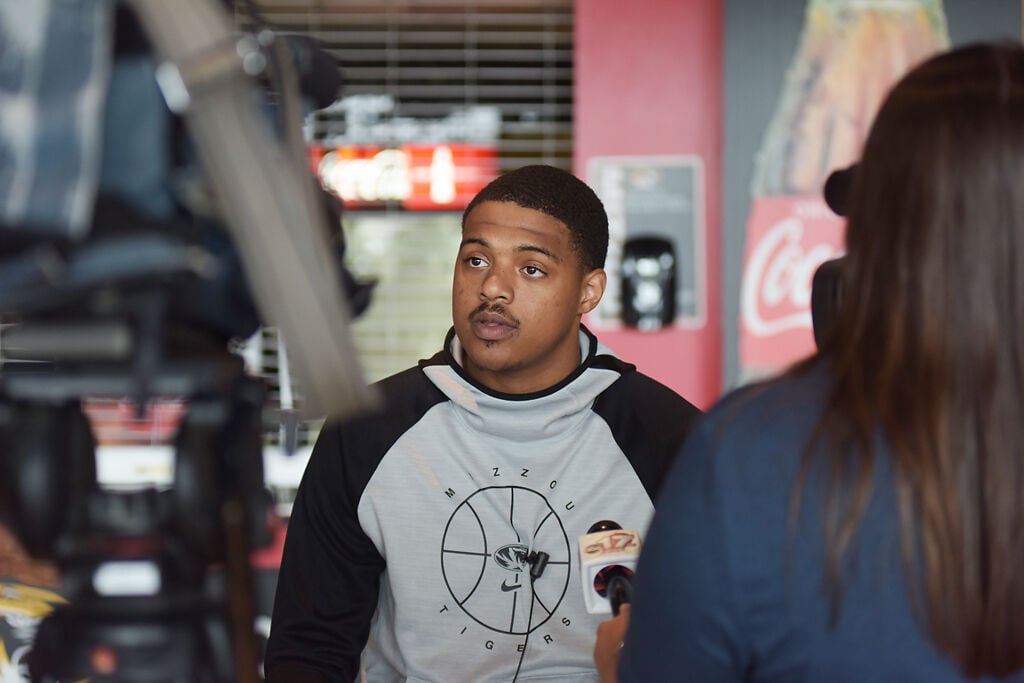 Jarron "Boogie" Coleman answers questions at an MU press conference to meet new student-athletes on Thursday at Mizzou Arena in Columbia. In the 2020-21 season, Coleman averaged 13.8 points a game. 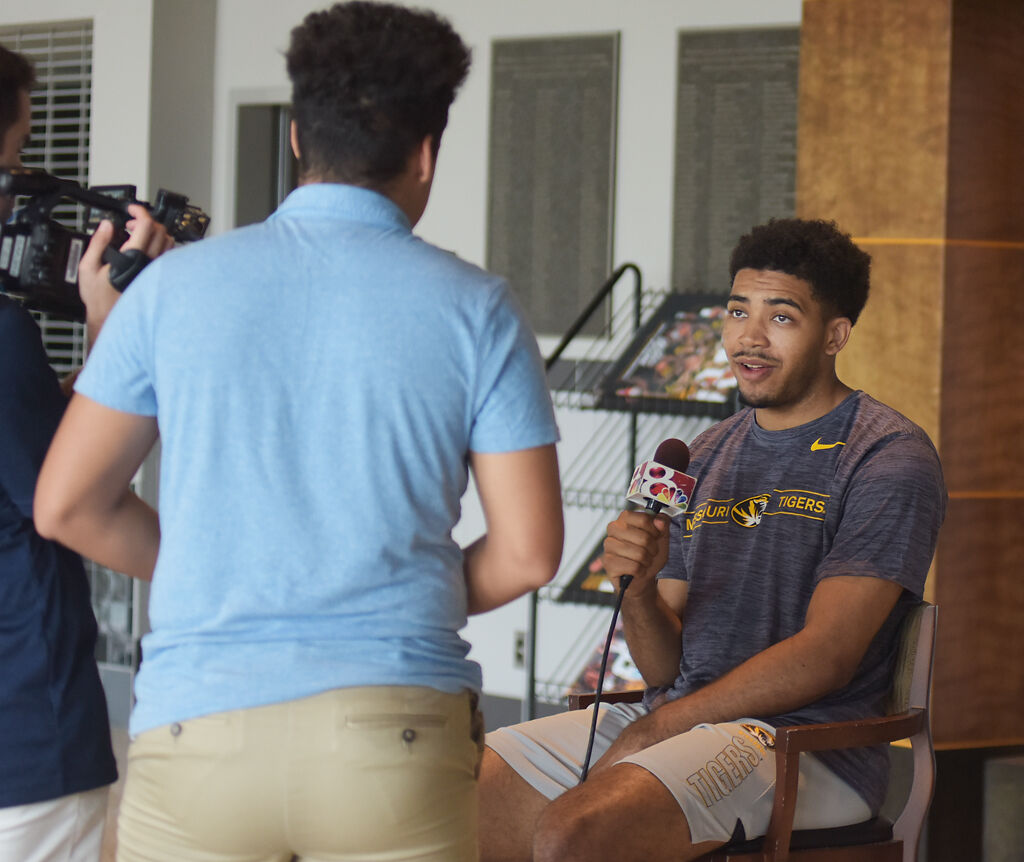 DaJuan Gordon talks to a reporter at a news conference to meet new student-athletes last Thursday at Mizzou Arena in Columbia. Last season Gordon started 22 of 25 games as a sophomore at Kansas State. He is one of four transfers who have joined Missouri this offseason.

Jarron "Boogie" Coleman answers questions at an MU press conference to meet new student-athletes on Thursday at Mizzou Arena in Columbia. In the 2020-21 season, Coleman averaged 13.8 points a game.

For college athletes, transferring is more than just changing schools.

Four of them are moving in at Missouri this summer. Mid-major transfers Jarron “Boogie” Coleman, Ronnie DeGray III and Amari Davis are entering coach Cuonzo Martin’s program via the transfer portal, as is guard DaJuan Gordon, making the move from Kansas State.

Each brings his own set of experiences and his own expectations as he settles in at a new basketball home.

Coleman is coming from Ball State of the Mid-American Conference. He won conference freshman of the year in his first season and followed that up by scoring 13 points per game as a sophomore. In the MAC, he got to go up against elite guards like Toledo’s Marreon Jackson and Ohio’s Jason Preston, which helped him grow as a player.

“It was always fun playing against them because they elevated my game,” Coleman said. “Seeing them make plays always made me want to make plays.”

Martin thinks he can make an instant impact in the SEC. “He can score the ball while making plays and plays with a high level of confidence.”

Missouri’s head coach praised his work ethic as well. “He’s a guy that plays on the playground all the time because he has to play somewhere,” he said. “While some guys only play in facilities, he wants to be playing everywhere all the time and that’s what I like.”

DeGray III has made more moves in the past five years than some people will in their lifetime. The Parker, Colorado, native played his senior season of prep basketball in Connecticut before enrolling at Massachusetts as a freshman. His latest stop in Columbia is treating him well since joining the Tigers in early May.

“Columbia is a lot bigger and has a lot more people than I am used to being around,” he said. “There’s so many things to do, and everyone here is so friendly to me. I love it out here.”

On the court, DeGray is hoping to help Martin transition to a positionless style of basketball where the team can switch defensively at all five positions. At 6-foot-7 and 240 pounds his ability to defend the perimeter and bang on the inside will be a valued asset to the team. Offensively he is stressing versatility, wanting to be able handle the ball and shoot it better.

“Every day I am working on my ball handle and my shooting,” he said. “I am getting up shots and trying to improve from three and everywhere else.”

Three of the four transfers coming into the program this season arrived from the mid-major level. Only Gordon comes in with major college basketball experience, having played his first two seasons in Manhattan, Kansas, for Kansas State.

In those two seasons he displayed athletic gifts a coach dreams about. Defensively, his length and size allowed him to be a contributor in the Big 12. Martin said that Gordon is a “legitimate 6-5”. That size and length on the perimeter will be a welcome addition to the team.

On the offensive end, things are a work in progress as he struggled to shoot the ball. His biggest goal this summer is to stay consistent.

“I am working on my complete game: shooting the ball better, rebounding better and getting stronger,” he said. “I know I bring a lot to the table but just making sure I am doing it every night is important.”

Davis is ready for SEC basketball

Davis, a Wisconsin-Green Bay transfer was the focal point on offense for a Phoenix program that struggled in his two years in the Horizon League. The smooth left-hander scored 16.5 points per game over his two seasons and is close to 1,000 career points.

Questions surround him though, as those numbers came at the cost of efficiency. He was a poor 3-point shooter in his time in Green Bay. At 6-1, it is also fair to wonder whether he will be able to get to the rim or get his shot off against the size and strength that the SEC has to offer.

Those are the biggest parts of his game he is working on this summer in preparation for 2022.

“My sophomore year I shot 28 or 29% from the 3-point line, so I want to upgrade that part of my game a little more,” he said. “In the weight room it’s just about getting bigger. I think I am (175 pounds) right now so I just want to get bigger.”

Davis expects to be ready for the jump from the mid-major level to SEC basketball.