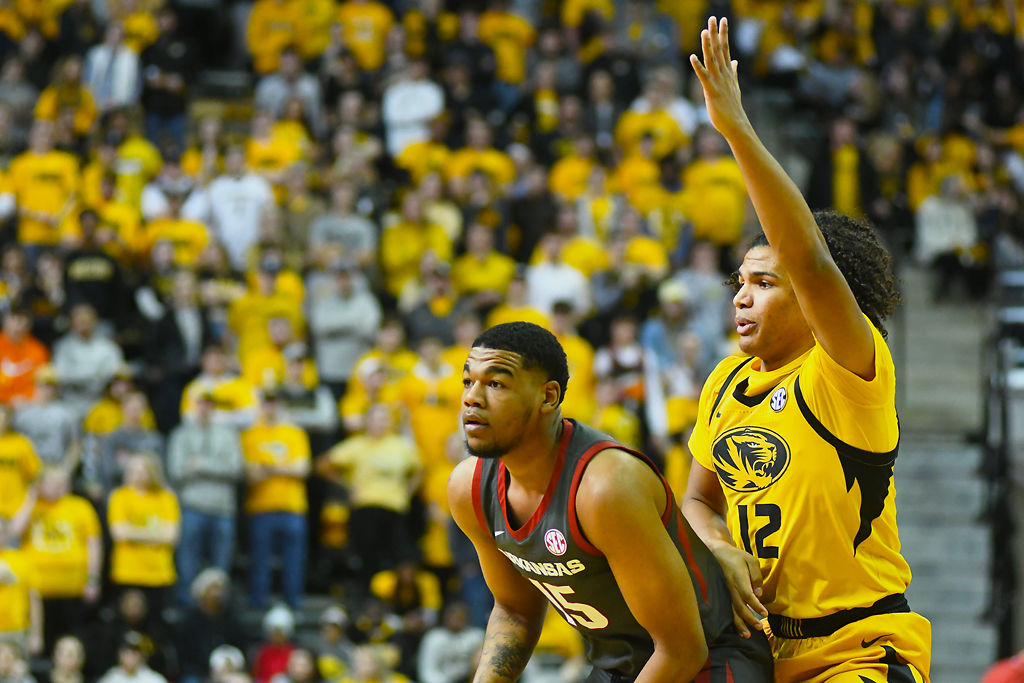 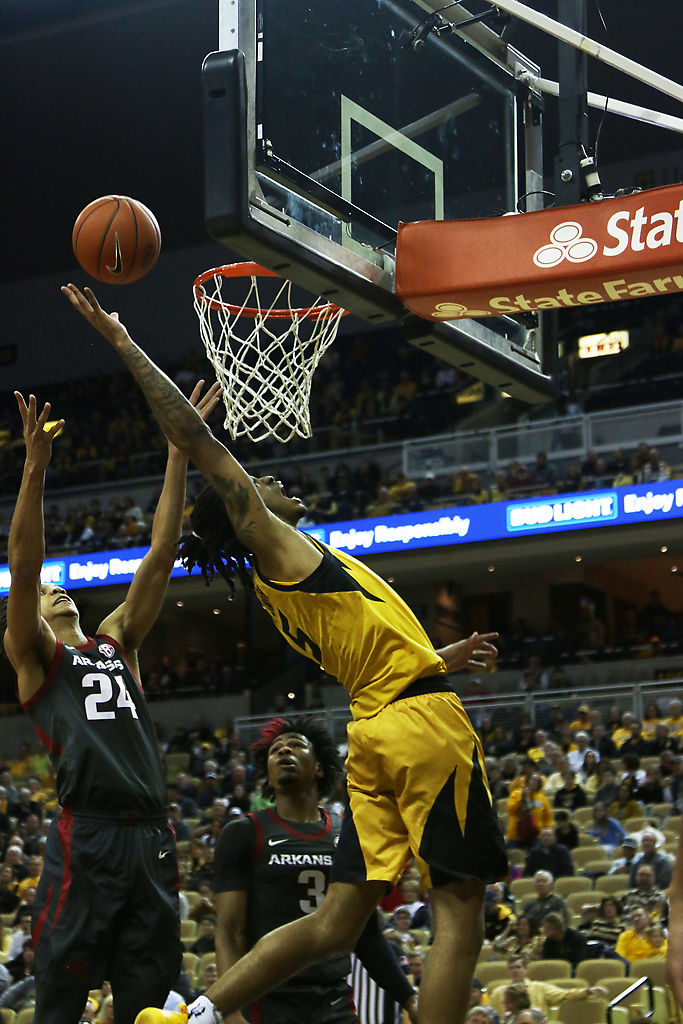 Missouri forward Mitchell Smith reaches for a rebound against the Arkansas Razorbacks Saturday at Mizzou Arena. 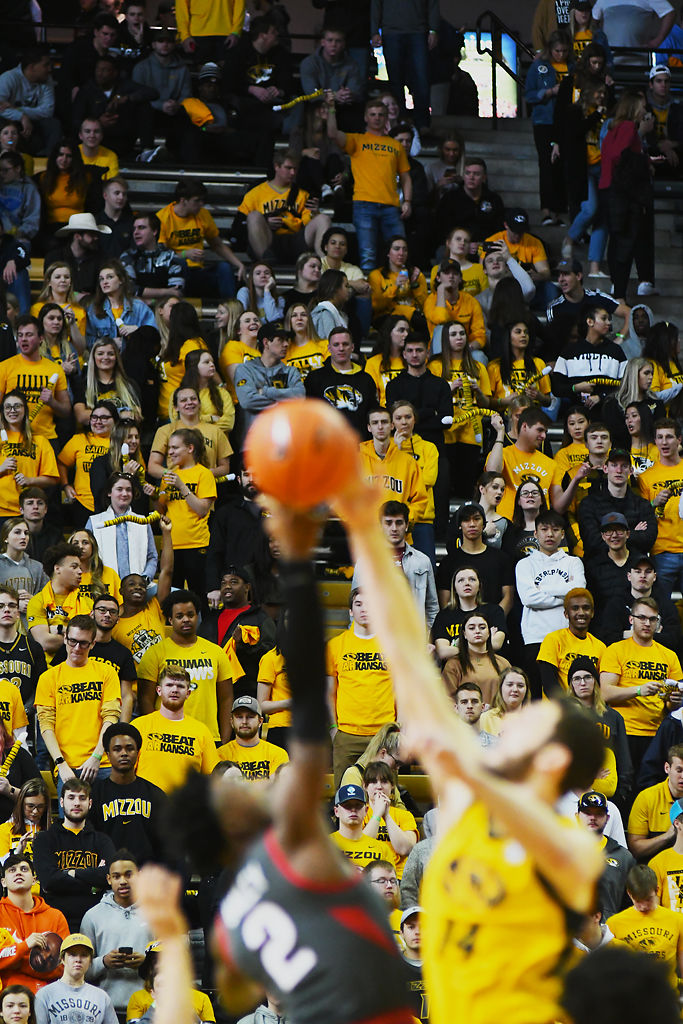 Missouri forward Reed Nikko reaches for the ball at tip-off against Arkansas forward Adrio Bailey as fans cheer at Mizzou Arena on Feb. 8. Mizzou won the game in overtime 83-79, bringing its conference record to 3-7 and overall record to 11-12.

Missouri forward Mitchell Smith reaches for a rebound against the Arkansas Razorbacks Saturday at Mizzou Arena.

Missouri forward Reed Nikko reaches for the ball at tip-off against Arkansas forward Adrio Bailey as fans cheer at Mizzou Arena on Feb. 8. Mizzou won the game in overtime 83-79, bringing its conference record to 3-7 and overall record to 11-12.

Recruited by former assistant coach Brad Loos — the father of the game’s namesake, a now-9-year-old girl who beat leukemia in 2016 — Nikko has been around for all but the original edition of the game that same year.

Though Nikko said he doesn’t know why he was chosen to wear Rhyan Loos’ name on the back of his warmup shirt Saturday afternoon, he took it as an honor. His passion about the cause of pediatric cancer awareness is why he told reporters that he makes sure the younger Tigers players understand that they don’t lose this game.

And for the fifth straight Rally For Rhyan game, they didn’t. The Tigers beat Arkansas 83-79 in a thrilling overtime game in front of a season-high 11,349 people at Mizzou Arena.

Thanks to Nikko’s efficiency, Xavier Pinson’s career-high 24 points and two other Tigers in double figures, Missouri pulled out all the stops for a much-needed win.

Missouri didn’t shoot the ball at an amazing clip — 38.3% from the field — but hit the important shots late. Pinson played like a man possessed in the second half and overtime, scoring 17 of his points and shooting 12 for 13 from the free-throw line overall.

It wasn’t a perfect performance, but for a team that had lost eight of its last 10 games entering Saturday, any win will do. The win was made that much sweeter with the news that Missouri raised an announced $80,000 for the fight against pediatric cancer during the annual awareness game.

“Me and Mitch (Smith), we were here, we played for Loos. We made very clear to everyone we don’t lose this game,” Nikko said. “This is the game that means a lot more than just basketball. There’s a heightened sense of focus ... of you getting a chance to play for something that’s way bigger than you, way more important than a stat line or any of that.”

Nikko finished with 11 points and 11 rebounds in just 20 minutes, his presence inside playing a major part in Missouri out-rebounding an undersized Arkansas lineup 52-35.

But what the Razorbacks lack in height, they more than make up for in guarding the perimeter. The Hogs are No. 1 nationally in 3-point defense, holding opposing teams to just 24.6% from deep all season. Unsurprisingly, Missouri — shooting barely over 30% from beyond the arc for the year — didn’t exactly put on a 3-point clinic, going 3 for 16 (18.8%).

But Tigers’ coach Cuonzo Martin noticed while scouting Arkansas that its guards, in defending the deep ball, often extend out too far away from the paint. This, in turn, leaves driving lanes open — and the speedy Pinson was a perfect conductor for a high-octane Tigers attack that capitalized on those openings.

“I just tried to set the tone,” Pinson said. “My teammates, they see me driving and they see the drives are open, that gives them a little more confidence to drive. We just had the ability and opportunity to drive more than usual. I mean, we took it every time we could.”

Controlling the rebounding margin was an especially important talking point for Martin and his staff. In addition to winning the rebounding battle, the Tigers also out-dueled Arkansas in both offensive rebounds (16-11) and second-chance points (16-11).

After being pummeled on the boards 49-30 in a loss at Texas A&M on Tuesday, Martin thought his squad took more pride in playing physical basketball, even at the expense of 59 total fouls between the two teams.

“It’s just a matter of keeping balls alive,” Martin said. “You look at Arkansas’ team ... they don’t have guys 6-foot-9, 6-10 like most teams in this league might have. Mitch and Reed did a great job of rebounding and keeping balls alive, while Tray (Jackson) came in and gave us big minutes rebounding the ball.”

Martin appreciated all that help, as for the 10th straight game, the Tigers played shorthanded.

Forward Jeremiah Tilmon Jr., despite playing Tuesday and saying on Friday that his stress fracture injury was “80%” of the way to full health, did not participate in pregame warmups Saturday. Guard Mark Smith (back) did and was available to play, but Martin sat him as a precaution.

Arkansas guard Mason Jones, the SEC’s leading scorer who was on a three-game stretch of 34, 30 and 40 points entering Saturday, was held under his 22-points-per-game SEC average with 17 against Missouri. His fifth foul, which came in the overtime period via a Mitchell Smith charge, was a massive moment as the momentum finally swung in Missouri’s favor permanently.

Former Hickman star Jimmy Whitt, who played against Missouri in Columbia for Arkansas in 2017 before spending two years at Southern Methodist and then re-joining the Razorbacks, returned to Boone County for the final time as a collegiate player Saturday. In front of friends and family, Whitt finished with 15 points on 6 for 18 shooting and thanked those who supported him on social media after the game.

“He’s a stabilizer for us,” Arkansas coach Eric Musselman said of Whitt. “He’s a really good defender. He can score for us. He’s just a unique player because he plays at the point guard position but he scores so well around the rim and mid-range.”

The Tigers will travel to Baton Rouge to take on a slumping LSU team Tuesday. LSU has lost two straight since going 8-0 to start SEC play, dropping games in the past week to Vanderbilt and Auburn. Tip is scheduled for 8 p.m. on the SEC Network.Supervising editor is Michael Knisley.

Sophomore Xavier Pinson and freshman Tray Jackson combined for some of the most electric and important plays in Saturday's win over Arkansas.

Three years into his Missouri coaching tenure, what's the verdict on Cuonzo Martin?