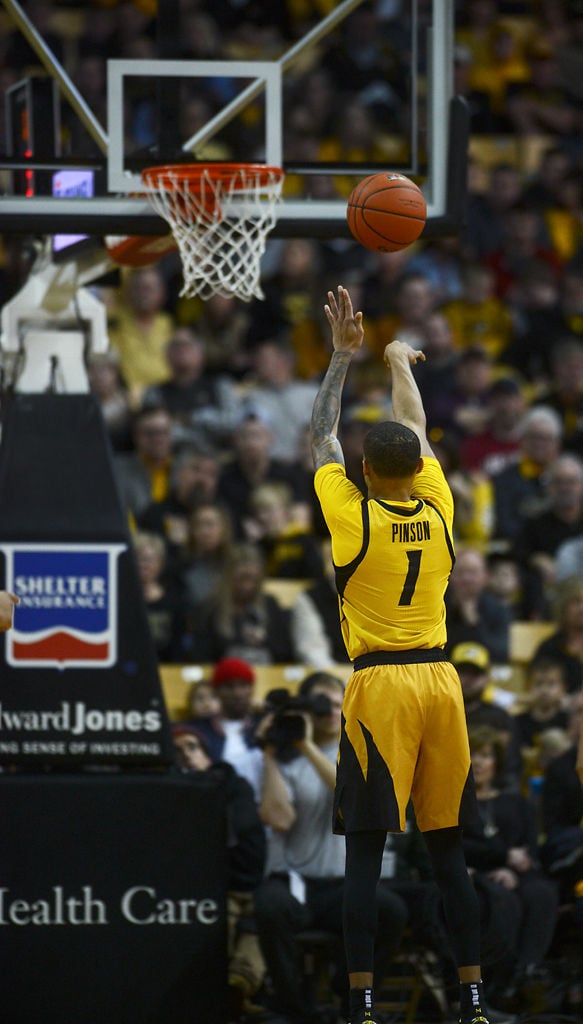 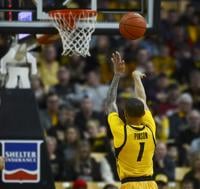 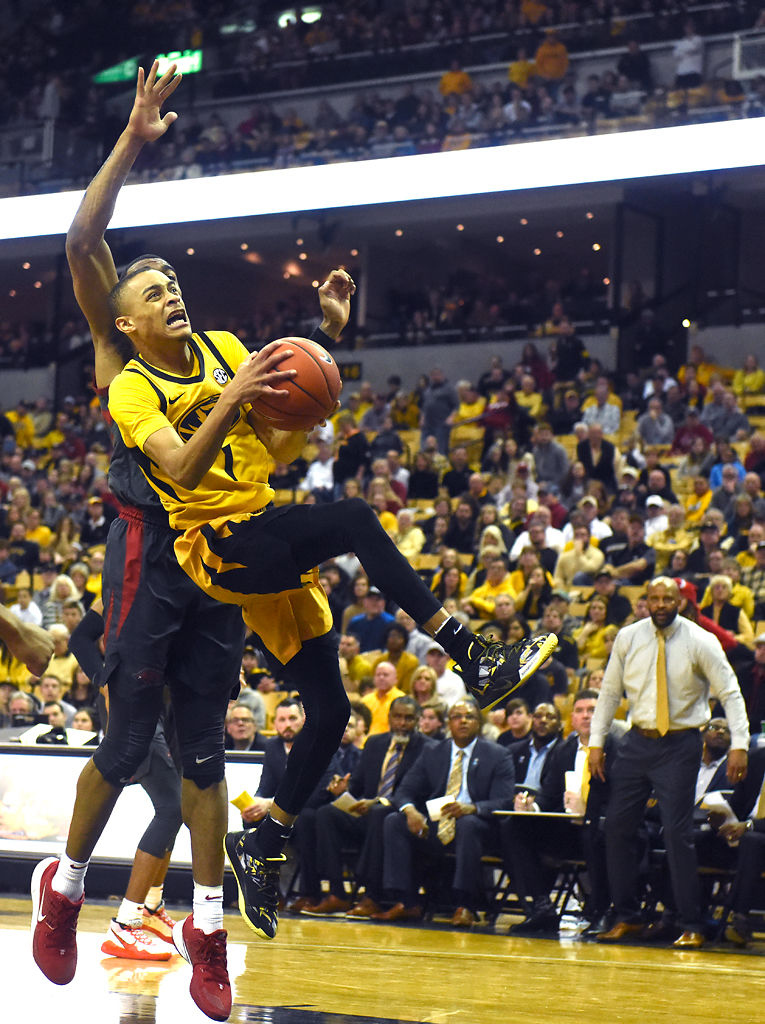 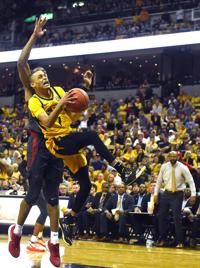 Guard Xavier Pinson protects the ball for a layup Saturday at Mizzou Arena. Pinson lead the team with 24 points, making 12-of-13 free-throws.

Guard Xavier Pinson protects the ball for a layup Saturday at Mizzou Arena. Pinson lead the team with 24 points, making 12-of-13 free-throws.

With 17 seconds remaining in overtime, it was getting tense in Mizzou Arena.

Arkansas’ guard Desi Sills drained a contested 3 to cut what had once been a seven-point Missouri lead down to only a basket. The Tigers struggled with the Razorbacks’ pressure, a common issue last season, and had just coughed up the ball on back-to-back possessions.

On the ensuing inbound, Xavier Pinson received the ball, skipped past his defender and made eye contact with bouncy big man Tray Jackson, who was streaking down the floor. The sophomore guard, not lacking for explosiveness himself, tossed up an alley-oop and Jackson threw it down, putting the game out of reach as the Tigers held on to win 83-79 for their third SEC win.

In seemingly a split second, two of Missouri’s most athletic players had iced the game in crowd-pleasing fashion: It’s not often you see alley-oop dunks in big moments of overtime games.

Those are the type of above-the-rim plays that Missouri (11-12, 3-7 SEC) has been missing all season.

The win over Arkansas (12-7, 4-6 SEC) is nice, sure. Missouri improves to 5-0 all-time in Rally for Rhyan games and picks up the best conference victory of its season.

But with a below .500 record and its next two games against two of the SEC’s best teams in LSU and Auburn, Missouri’s NCAA Tournament hopes are all but over. The Tigers, a team with only one senior, are playing for the future, a future that gets a lot more exciting with Jackson and Pinson squarely in the picture.

Pinson was the primary catalyst in the Tigers’ upset victory. The sophomore scored 24 points, the most of his career, and was the focal point of most Missouri possessions down the stretch.

“We couldn’t keep him in front of us,” Arkansas coach Eric Musselman said.

All season Missouri has struggled in late-game situations. Dru Smith, the Tigers’ starting point guard and primary creator, has a sort of old-man game at 22 years of age. Smith is effective, no doubt: He’s the Tigers’ leading scorer for a reason. But against the length and verticality of SEC defenses, Smith struggles to separate as the primary creator in late-clock situations.

That’s not a knock on Smith, the Tigers’ best perimeter player. Shot creation is the most valuable skill in basketball, and Pinson was able to flash that skill late in the game.

Missouri ran its offense through Pinson down the stretch, primarily running pick-and-roll actions to take advantage of Arkansas’ switching defense. Once he got a bigger defender switched onto him, Pinson started cooking: He got downhill early and often en route to shooting 12-for-13 from the free-throw line.

The Razorbacks are the best 3-point defense in the country. Missouri, a team that struggles with long-range shooting anyway, was going to have to win by attacking the basket. Pinson allowed that to happen.

“I’m happy he had 24 points but I’m not surprised,” Missouri coach Cuonzo Martin said. “He just did what he was supposed to do. You have a big guy defending you we have to take advantage of that. ... He did a good job of getting downhill.”

This isn’t a phenomenon limited to Saturday’s game. When Missouri gets to the rim, and by extension the line, the Tigers win games. Pinson got to the charity stripe time and time again. Missouri fans have to be hopeful this is the guy he can be moving forward because when he’s rolling like this, Missouri’s 173rd-ranked offense looks a lot better than that.

While Pinson stole the show against Arkansas, Jackson showing his chops in the first tight-game minutes of his Missouri career has to be encouraging. He scored nine points on 80% shooting and grabbed four rebounds in 15 minutes in which the Tigers outscored their opponents by 10 — the highest plus/minus on the team.

The freshman is averaging 2.7 points and 1.9 rebounds in 7.9 minutes per game this season. There are often games where he does not get off the bench at all. But Jackson was the highest-rated recruit in the Tigers’ 2019 class. The 6-foot-8 former four-star recruit brings top-level athleticism and legitimate scoring ability to the table, two things the Tigers could surely use more of.

“When you don’t see him out there, the biggest reason he’s probably not out there, besides growth and understanding, is he’s got to improve his conditioning,” Martin said.

In the first half, Jackson threw down one of the best dunks of Missouri’s season. He caught the ball at the 3-point line, but after no Razorbacks defenders closed out, he attacked the basket and finished with a thunderous left-handed and-1 tomahawk dunk that got the season-high Mizzou Arena crowd of 11,439 on its feet.

In a sequence late in the second half, Jackson rose up to swat a shot on one end of the floor . After Pinson sprinted downcourt and missed an acrobatic layup, Jackson was there on the other end for a putback slam.

That’s what players like Jackson and Pinson can bring to the game. That type of dynamic athleticism makes the defense have to second-guess itself and gives Missouri an extra dimension on offense, both in the half-court and in transition. And for a team that plays a slow, grind-it-out style of basketball that can often lead to snoozers such as Tuesday’s loss at Texas A&M, Pinson and Jackson’s highlight plays provide a jolt of energy.

“He’s one of the best 3s or 4s I’ve ever played with. His opportunity will come,” Pinson said about Jackson. “Like I tell him every day, (he’s) just like how I was last year, in and out of the rotation. His opportunity will come, he’s just got to stay patient.Right after this, we’ll both get back in the gym and keep getting better.”Even after a career game, for two of Missouri’s highest-flying players, there are still new heights to reach.

Xavier Pinson's career day helped Missouri down the Razorbacks in overtime to go 5-0 all-time in the annual Rally For Rhyan game.

MU's Martin on social justice, the pandemic and basketball

66 players opt out of NFL season due to coronavirus pandemic

Brady learning new playbook, excited to get started in Tampa