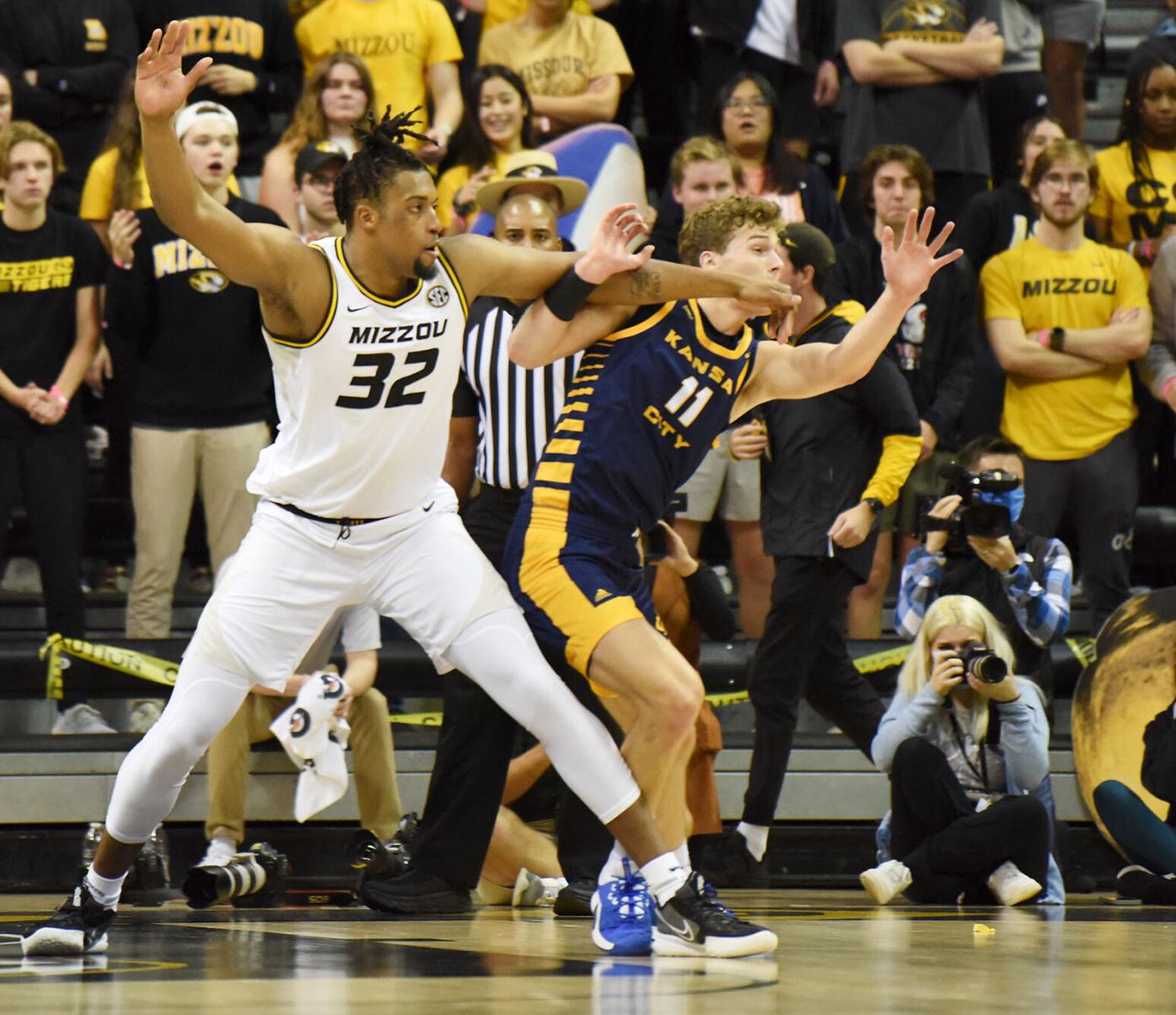 Jordan Wilmore calls for the ball during Missouri’s game against Kansas City on Monday at Mizzou Arena in Columbia. Wilmore had one point during the game. 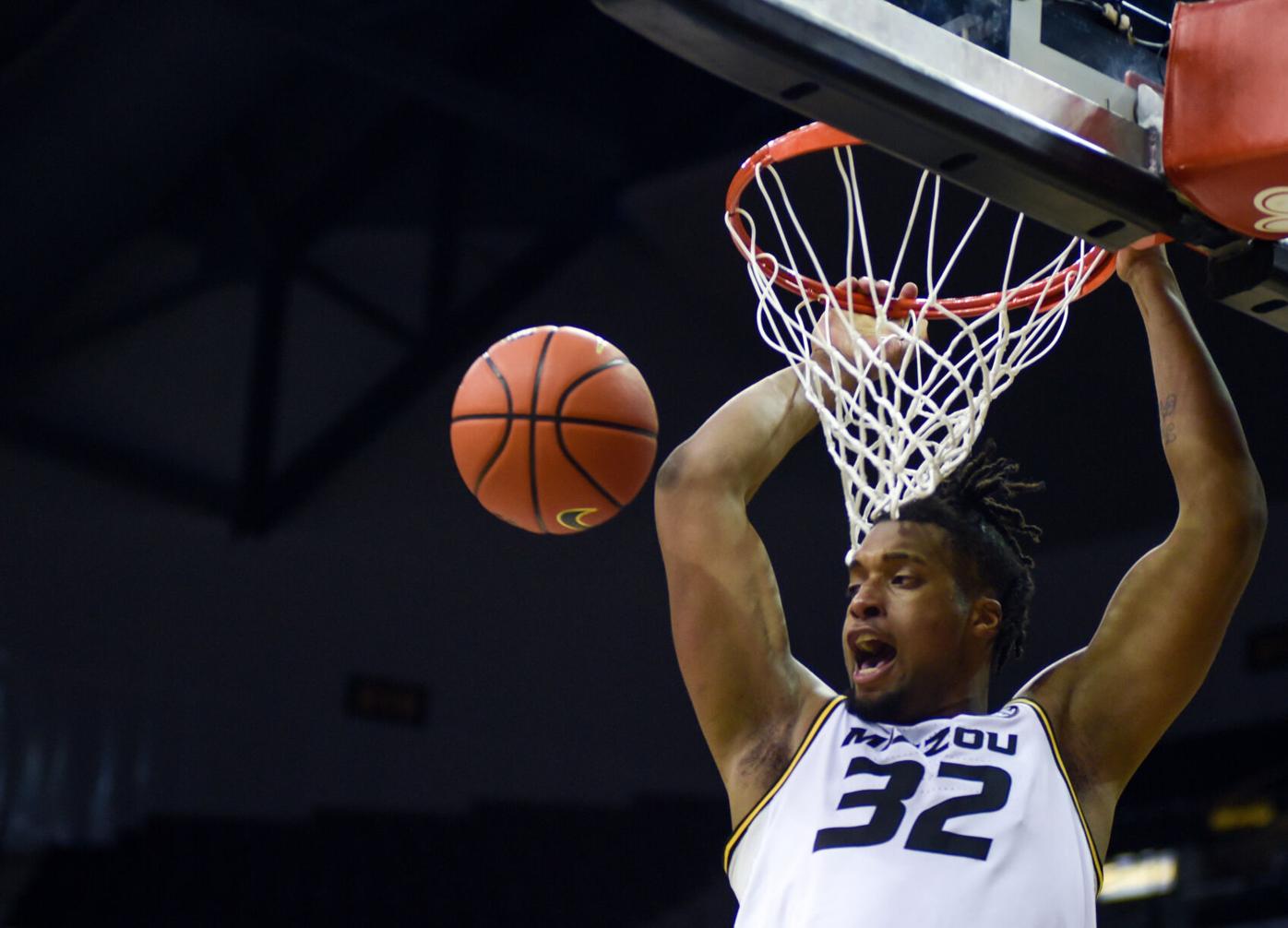 Jordan Wilmore calls for the ball during Missouri’s game against Kansas City on Monday at Mizzou Arena in Columbia. Wilmore had one point during the game.

“You gotta bury his --- on offense, man,” Harris-Stevens said in a video posted on the program’s Twitter account. “You’re 7-3, 300, you gotta use that tonight.”

In 16 minutes, he finished with a career-high 11 points, six rebounds and three blocks. He came in with just seven career points, three of which came in the Tigers’ first two games of this season. After playing an extremely limited role last season, Wilmore has started two of three games this season, already eclipsing his minutes total from the 2020-21 campaign.

“Big J didn’t really play much last year, but he’s definitely improved a lot,” forward Kobe Brown said prior to the start of the season. ” I expect him to be a huge part of the team this year.”

Wilmore largely played behind Jeremiah Tilmon, who has since moved on and currently plays for the Lakeland Magic in the NBA G League.

“Jeremiah was probably one of his biggest cheerleaders,” Missouri coach Cuonzo Martin said after the Northern Illinois matchup. “I think it’s just Jordan understanding that, ‘I can be just as good as any big guy,’ but you have to believe that.

“You have to put a tremendous amount of hours into it — exhausting hours. You got to get consumed with it, and I think he’s probably about 75% there.”

Martin and others feel as though Wilmore is beginning to have that understanding. The sophomore from Laurel, Maryland, is one of only three players who saw the floor last season to return to the Tigers, along with Brown and Javon Pickett. Redshirt freshman Sean Durugordon joined the team midway through the season but did not play.

Wilmore was one of the bigger question marks coming into the season regarding where he fit and how much he would play. Early signs point to him featuring prominently in the game against Southern Methodist at 7 p.m. Sunday.

Talk from players and coaches alike has suggested that Wilmore had improved a lot from last season, and that was backed up by his performance Thursday.

“It definitely proved my ability to myself, I think mainly it was just a mind thing,” Wilmore said. “I just had to believe in myself, so it’ll definitely boost my confidence going on.

Wilmore started the game with a backboard-shaking dunk — his first of four — to give Missouri a 2-0 lead. He was a dominant presence on both ends, and Northern Illinois didn’t have an answer for him.

“He’s 7-3, so he intimidates people down there,” guard DaJuan Gordon said. “Just him being out there changed the whole game.”

As the Tigers move toward the more difficult part of the nonconference schedule, they’ll need performances like Wilmore’s from Thursday to make it through. Martin said he would have trouble finding 10 better schedules in the country, and with games against No. 3 Kansas and No. 10 Illinois on the horizon, there’s an argument to be made that he’s correct.

And as the schedule moves into its more difficult parts, Martin and his staff may need Wilmore to have more nights like Thursday, especially after the embarrassing loss to Kansas City.

“You need to get this game to get it out (of) your system, move forward,” Martin said. “Really happy for Jordan and how he played because he puts the time in.”

Who: Missouri vs. SMU

Blackwell earns her first SEC Player of the Week honor

Battle of the Stars: Blackwell and Smith's showdown in Waco