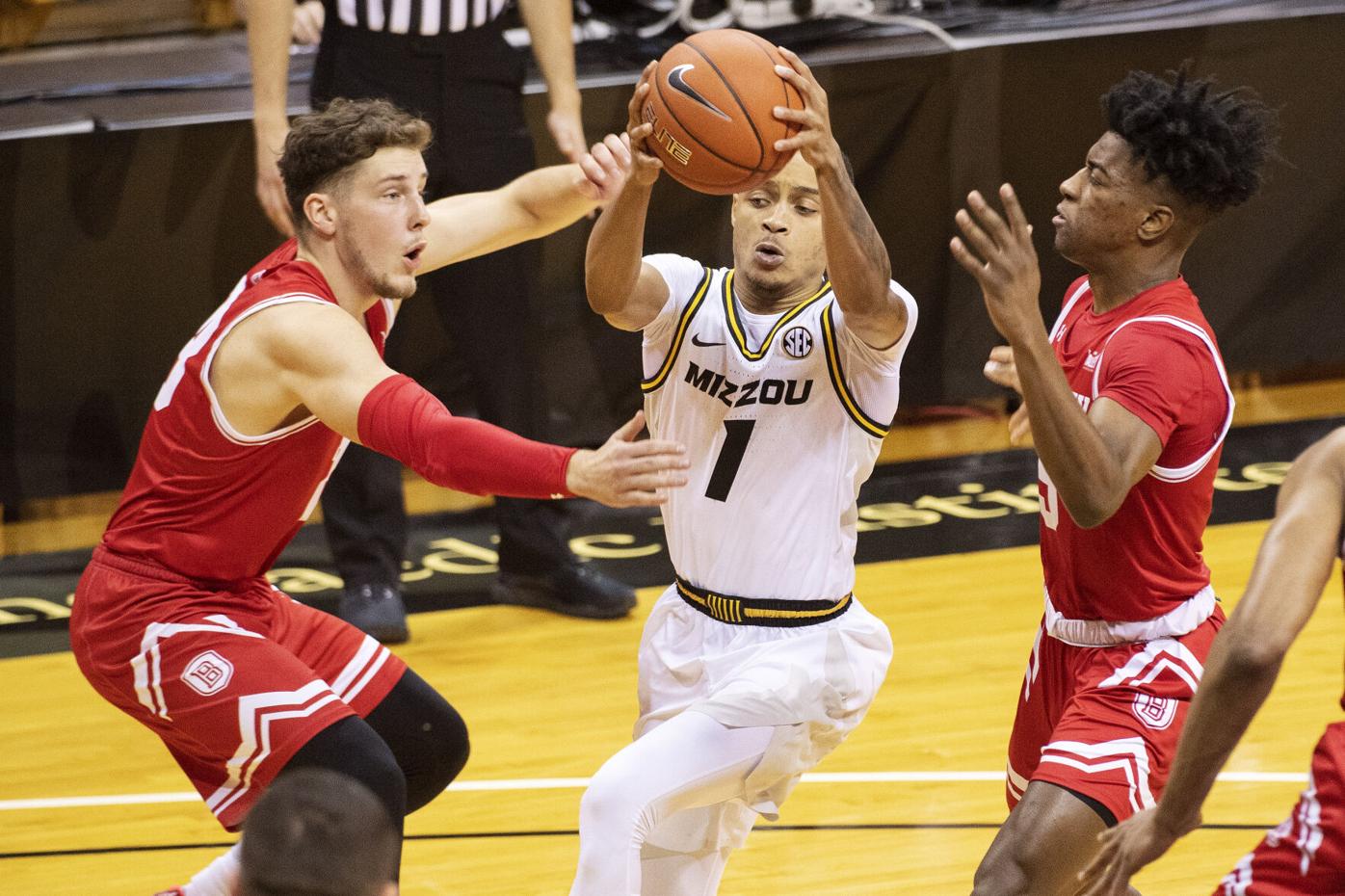 Missouri’s Xavier Pinson, center, drives between two Bradley players during the Tigers’ win Dec. 22 in Columbia. Pinson is shooting 25% from 3 in his past six games. 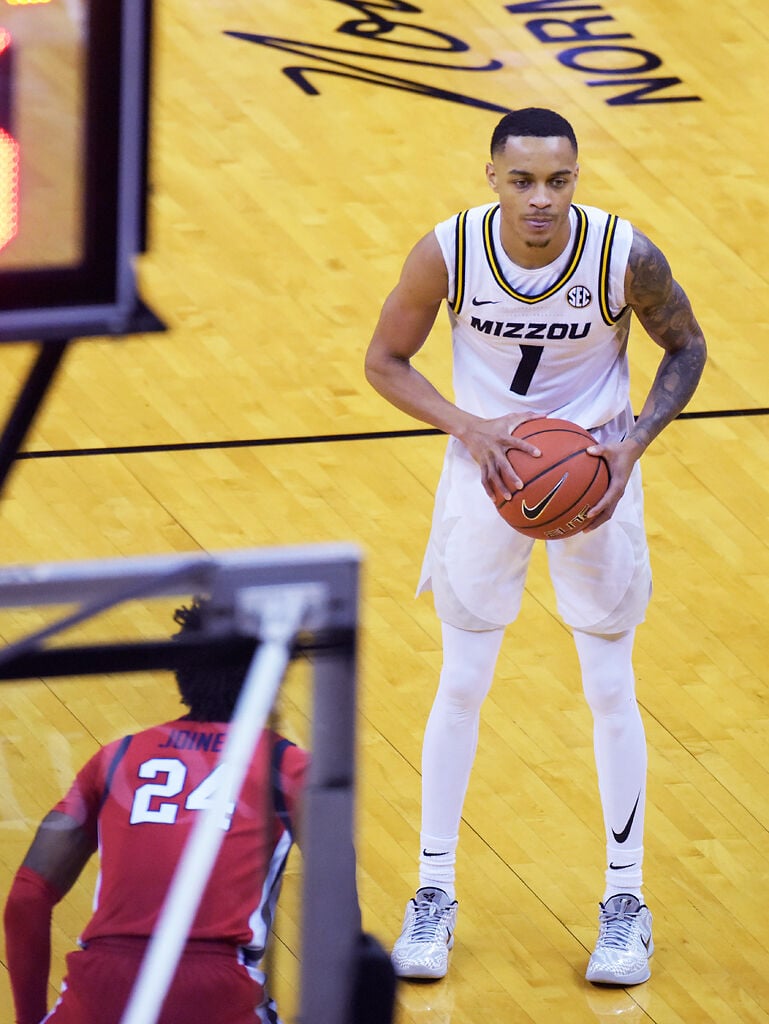 Missouri’s Xavier Pinson, center, drives between two Bradley players during the Tigers’ win Dec. 22 in Columbia. Pinson is shooting 25% from 3 in his past six games.

Midway through the second half Tuesday, Missouri men’s basketball’s offense finally looked to be clicking.

After shooting 32% in the first half, a 15-2 run out of halftime gave the Tigers their first lead of the game against Ole Miss after trailing by as much as 13. Missouri did this all with its starting point guard and leading scorer, Xavier Pinson, on the bench.

Pinson, who averages 14 points per game, had arguably his worst game of the season in the loss to the Rebels. He went 1 for 9, finishing with two points in 26 minutes. His plus-minus rating of minus-15 was the lowest of any Tiger.

Even in the final minutes, Missouri coach Cuonzo Martin considered going to backup point guard Drew Buggs over the struggling Pinson. Buggs’ contributions normally don’t show up in the stat sheet, including Tuesday when he didn’t score and had one assist.

However, Buggs’ ability to manage the offense doesn’t go unseen by Martin. He had a plus-minus rating of plus-12, the best of any Missouri player.

“X is more of a scorer, with the mentality to score when it’s late like that,” Martin said following the loss. “But it was certainly thoughts (of playing Buggs), yes.”

To say Pinson has been in a funk would be an understatement. He hasn’t been consistently aggressive attacking the rim. He hasn’t been able to get to the free-throw line in three of the past five games, including Tuesday.

“I didn’t think X was very aggressive, even though he took nine shots,” Martin said. “I didn’t think he was aggressive in attacking. I think he probably settled for some on the perimeter instead of getting downhill, getting in the lane and making plays, if not for himself, for other guys.”

In prior games, Martin has said that Pinson plays at his best when attacking downhill instead of side-to-side. While his 3-point percentage has gotten slightly better over the season, he’s begun to settle for more outside jumpers.

In the past six games, 32 of Pinson’s 67 shots have been from 3 (47.8%). During that stretch, he’s converting 25% of his deep shots. With nearly half of his shots coming from beyond the arc, Pinson has fed into the defense, playing the percentages.

Due to his inconsistent shooting, zone defenses seem to hurt Pinson the most of any Tiger. Ole Miss isn’t afraid to mix in a zone and stick with it if it’s working, and Pinson struggled in both games against the Rebels, averaging four points on 20% shooting.

While Ole Miss played zone sparingly in the first matchup, it still took the Tigers time to adjust, including Pinson. He wasn’t aggressive attacking the Rebels regardless of their defensive scheme. He didn’t shoot a free throw in either matchup.

Following the Feb. 10 loss to Mississippi, Martin echoed a similar observation to the one he gave Tuesday.

“He didn’t attack the rim at all,” Martin said. “He wasn’t aggressive at the rim, making plays. In a lot of ways, when he’s not doing that, we become stagnant because you’re counting on that, especially certain actions that we have. When he’s not around the rim and he’s taking tough 3s and tough 2s, everybody kind of stands around.”

Pinson hasn’t only struggled to score against Ole Miss. While he averages 14 points per game, the number can be deceiving: Pinson has five games this season of 22 points or more but seven games in single digits.

The large variance in scoring speaks to Pinson’s inconsistency. It shows in Martin’s breakdown following games. When Missouri wins, it’s usually because Pinson is getting to the rim or free-throw line. In losses, Martin describes him as passive and hesitant to drive to the rim.

While Martin envisions the Tigers playing through center Jeremiah Tilmon, Pinson’s ability to take pressure off of the big man is important. A pick and roll only becomes more impactful when both players are threats to penetrate or score. However, with Pinson’s struggles, the duo’s pick and roll hasn’t been as effective, with alley-oops occurring less frequently and defenses constantly going underneath screens.

With the Tigers continuing to slide down NCAA tournament projections, it seems that Missouri’s competitveness hinges on the play of Pinson. However, Pinson doesn’t have much time. With the season dwindling and Martin contemplating giving Buggs more minutes, Pinson will need that consistency to be better late than never.

Gonzaga is No. 1 in preseason AP Top 25; UCLA, Kansas next