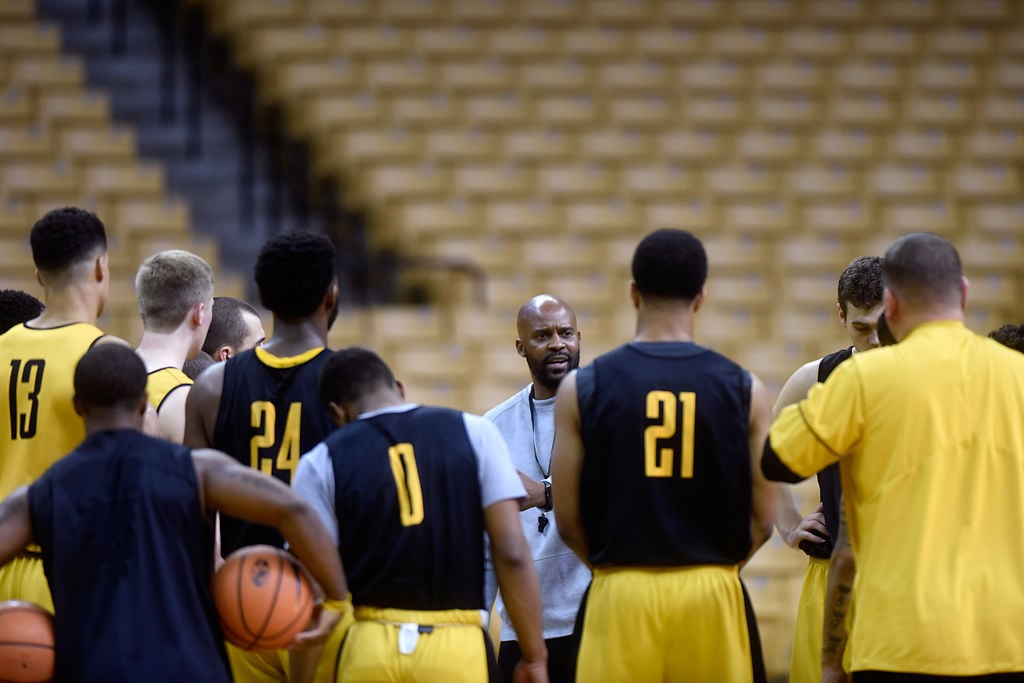 Missouri coach Cuonzo Martin speaks with his players during an Oct. 12, 2017 practice at Mizzou Arena. In Martin’s three years with the Tigers, he’s led the team to just a 50-46 record. 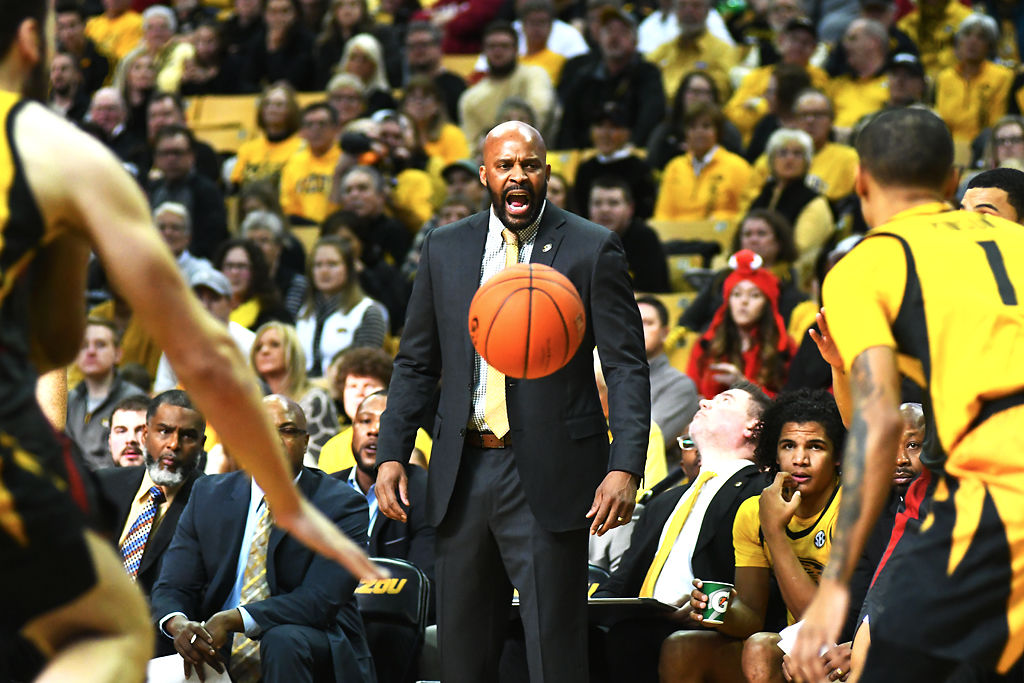 Head coach Cuonzo Martin gets the attention of his players on Feb. 8 at Mizzou Arena. Martin has been a step up from the Tigers’ previous coach, Kim Anderson, but has not competed with the top in the SEC. 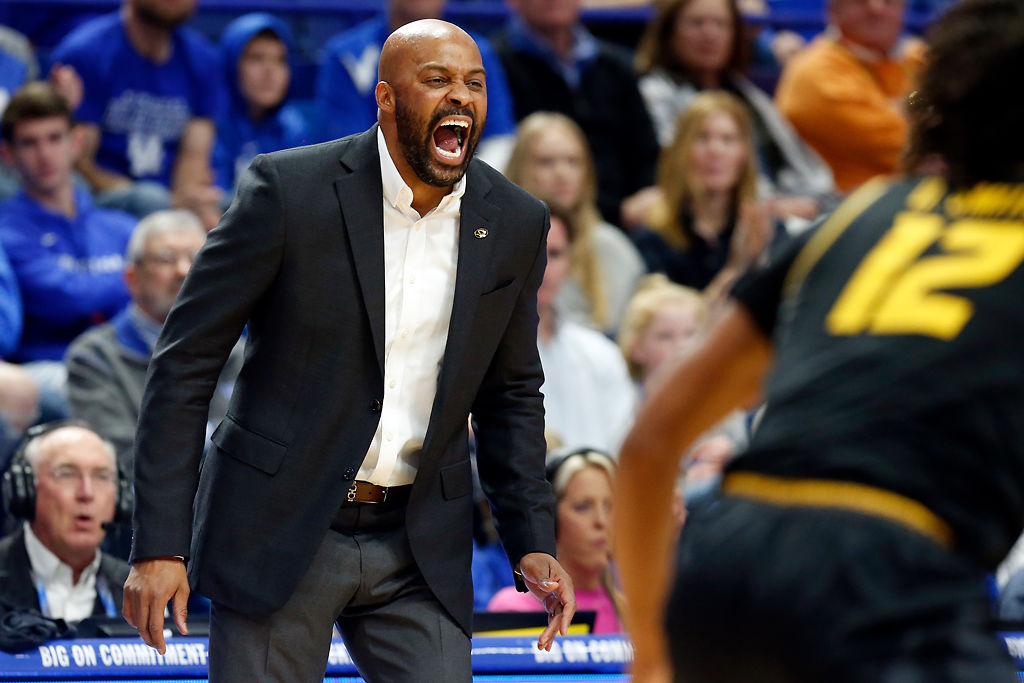 Missouri head coach Cuonzo Martin yells to his team during the first half of the Tigers’ 71-59 loss to Kentucky on Jan. 4 in Lexington, Kentucky. Martin has picked up some touted recruits but has also missed out on some big names in his three years with Missouri.

Missouri coach Cuonzo Martin speaks with his players during an Oct. 12, 2017 practice at Mizzou Arena. In Martin’s three years with the Tigers, he’s led the team to just a 50-46 record.

Head coach Cuonzo Martin gets the attention of his players on Feb. 8 at Mizzou Arena. Martin has been a step up from the Tigers’ previous coach, Kim Anderson, but has not competed with the top in the SEC.

Missouri head coach Cuonzo Martin yells to his team during the first half of the Tigers’ 71-59 loss to Kentucky on Jan. 4 in Lexington, Kentucky. Martin has picked up some touted recruits but has also missed out on some big names in his three years with Missouri.

Cuonzo Martin’s tenure coaching Missouri men’s basketball certainly hasn’t been short of the weird or unique. But a coach’s success ultimately comes down to wins, losses and getting the job done when it matters.

In the three years since the East St. Louis, Illinois, product and former pro became head of the Tigers, he’s snagged a Rivals No. 1 overall recruit (Michael Porter Jr.), taken Missouri to its first NCAA Tournament in five seasons and had this year’s season suddenly ended by the ongoing COVID-19 pandemic.

As Martin now has a firm stamp of influence on the program, where does that leave him among others?

Compared with the previous Tigers’ coaching hire, Kim Anderson, Martin has certainly been a vast improvement. Going beyond that comparison is where Martin begins to pale a bit.

Martin at Missouri has an overall record a shade over .500 at 50-46, with an SEC mark of 22-32, almost doubling the cumulative wins of Anderson, who went 27-68 overall in his three seasons. Martin’s total is boosted by his impressive first season, in which he led the Tigers to a 20-13 record with an NCAA Tournament berth despite Porter Jr.’s near season-long injury.

However, Martin has only been OK in his two most recent seasons. Missouri finished with nearly identical records, 15-17 and 15-16, in 2018-19 and 2019-20, respectively, and though the Tigers were robbed of a chance to make an SEC Tournament run this year, it’s unlikely — based on bad losses, low NET ranking, etc — that Missouri would have qualified for a postseason tournament anyway.

To compare Martin’s three years with a Missouri coach of the past, Quin Snyder from 2002-05 had a record of 54-42, with a .563 winning percentage in that time compared to Martin’s career mark of .521. Snyder also managed a single NCAA Tournament berth (2002-03), his tenure unceremoniously ending in 2006 when he resigned midseason amid talk that he’d be fired in the offseason.

Martin’s footprint on Missouri is more prevalent than ever, with the number of non-Martin recruits dwindling to its lowest number.

His biggest recruiting win, signing the Columbia-born Porter Jr., was helped by snagging his father, Michael Porter Sr., as an assistant coach after he was dismissed at Washington along with the rest of Lorenzo Romar’s staff following the 2016-17 season.

Porter Jr.’s Missouri career lasted a grand total of 53 minutes thanks to a back injury that sidelined him for most of his lone season, but it also showed perhaps an underrated side of Martin’s recruiting game: courting transfers.

Canisius transfer Kassius Robertson thrived in Porter Jr.’s absence, posting an All-SEC season in Columbia and being instrumental to the Tigers’ run to the NCAA Tournament. The trend has continued since then as Dru Smith (Evansville) and Mark Smith (Illinois) each have established solid resumes under Martin after once spending time at other Division I programs.

The rest of Martin’s recruits have been a mixed bag. Of the 13 prep players Missouri has signed for scholarships, six have since left the program. Two (Porter Jr. and Jontay Porter) declared for the NBA Draft, and four (Blake Harris, C.J. Roberts, Christian Guess and Mario McKinney) departed for other reasons.

Of the seven that remain, forward Jeremiah Tilmon (8.9 points, 4.9 rebounds per game in career) and guard Xavier Pinson (8.9 points, 2.9 assists per game in career) have been the most productive. But Martin has had his share of recruiting whiffs, too: Missouri narrowly missed out on five-star St. Louis guard Caleb Love in the last recruiting cycle, while five-star California guard Josh Christopher, who visited MU, is widely projected to sign with Michigan, per 247 Sports.

Just one player on the projected Missouri roster for next season, Mitchell Smith, was not a Martin recruit, meaning that the 2020-21 roster will be composed almost entirely of players that fit Martin’s vision. The Tigers’ lone Class of 2020 signee at the moment, 7-foot-3 giant Jordan Wilmore, will join the team as the tallest player to ever wear the black and gold if he plays in a game next year.

Illinois’ Brad Underwood, who started his tenure the same season Martin did, was rewarded with a cushy three-year contract extension earlier this month after leading the Fighting Illini to a 21-10 record and fourth-place finish in the brutal Big Ten conference.

As of now, there’s been no such extension talk with Martin. The fourth year of his contract, which officially begins on May 1, will be important to his job security.

Missouri does not have the right to fire Martin without cause until year five of his contract, considered to be between May 1, 2021, and April 30, 2022. This is an extension from the original terms of not being able to be fired before year four, thanks to Missouri qualifying for the NCAA Tournament once in Martin’s tenure.

Martin’s buyout if fired within that period would be $6 million, something that an already cash-strapped MU Athletic Department — now dealing with lost revenue from the SEC’s cancellation of spring sports — would have to consider.

Among the eight SEC programs that have had the same coach for the past three seasons, Martin has the lowest winning percentage, just narrowly behind South Carolina’s Frank Martin (.531). Although Cuonzo Martin, in fairness, has only had those three years to perfect his vision, his fourth year at Missouri will be critical in establishing the Tigers as a consistent force in the league.

Would Martin be on the hot seat under normal circumstances? Most likely. But even if the wins don’t rack up within the next year, it’s hard to see the Athletic Department pulling the trigger and taking yet another major financial hit after operating in the red for three years.

Three years into his Missouri coaching tenure, what's the verdict on Cuonzo Martin?

The Waiting Game: For NBA coaches, that's the new schedule

Patriots use team plane to help Mass., fly N95 in from China

Bucks try to make sure they're ready whenever season resumes