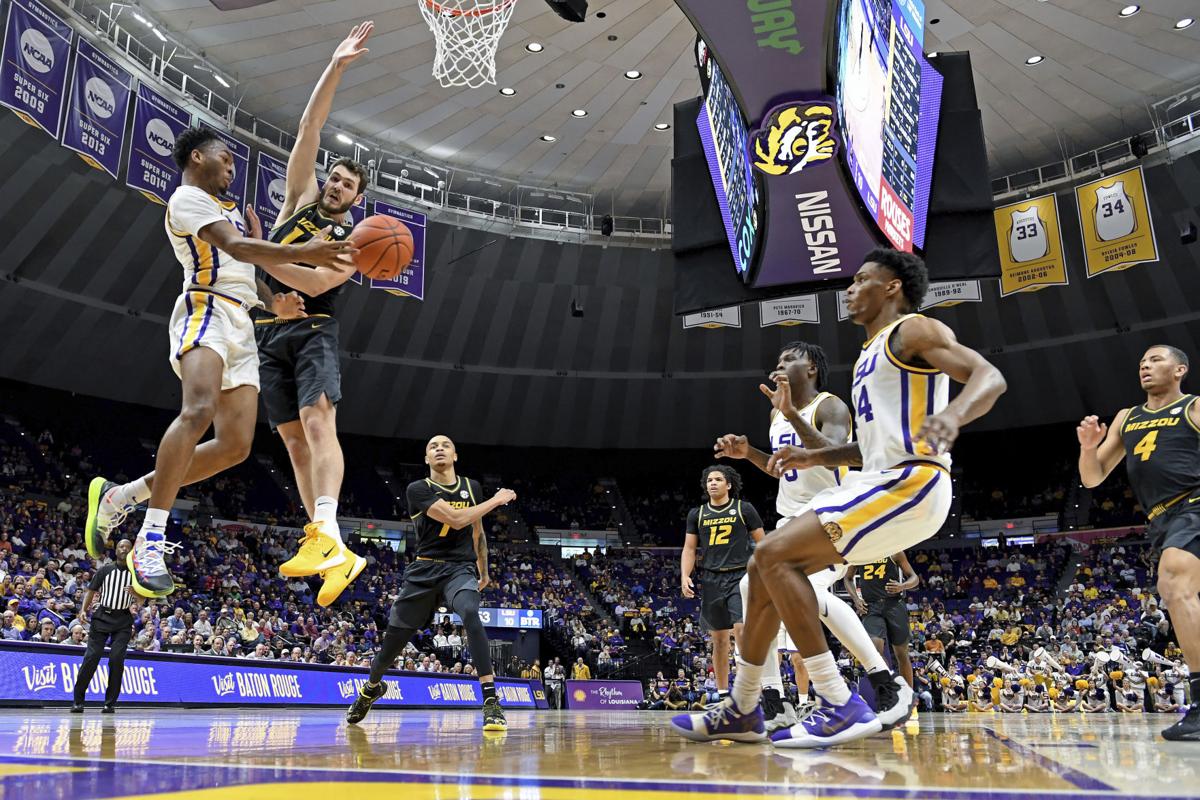 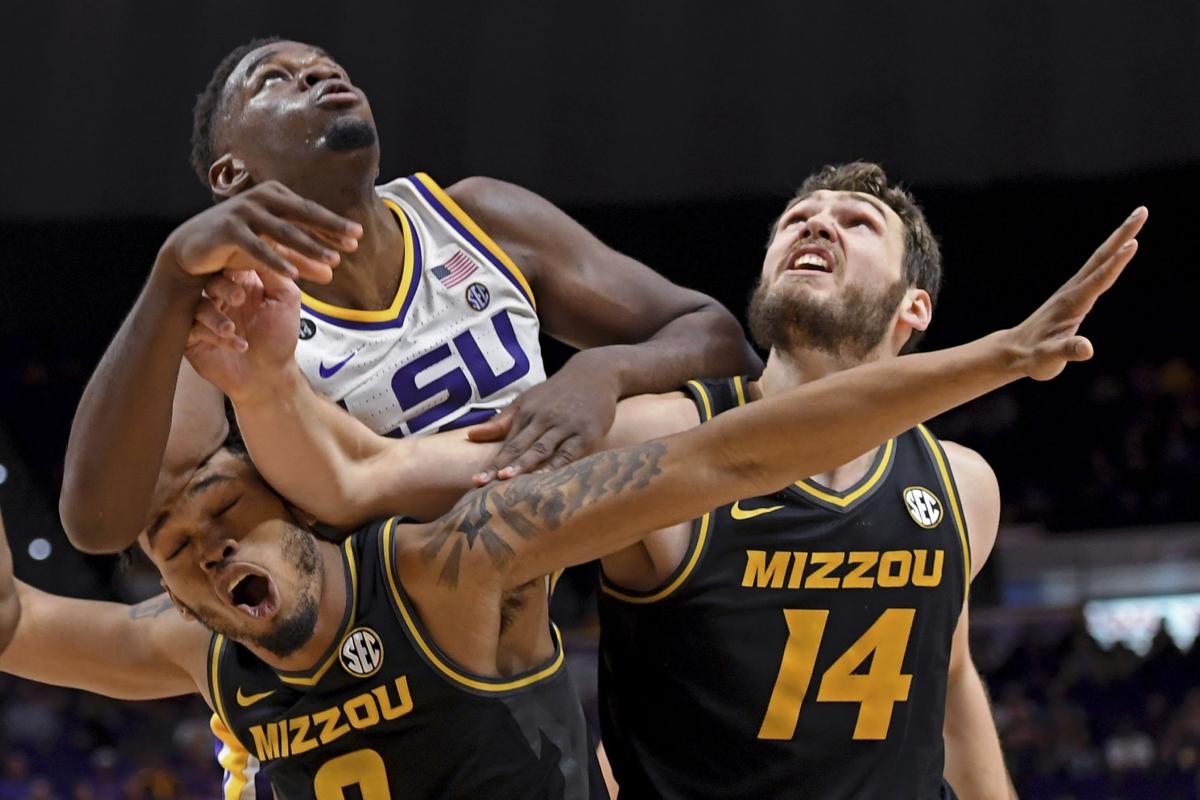 Missouri guard Torrence Watson winces while getting caught on the bottom as LSU forward Darius Days, center, and Missouri forward Reed Nikko battle for position to grab the rebound in the first half of Tuesday's game in Baton Rouge, La. Nikko had 13 points and eight rebounds in the game.

Missouri guard Torrence Watson winces while getting caught on the bottom as LSU forward Darius Days, center, and Missouri forward Reed Nikko battle for position to grab the rebound in the first half of Tuesday's game in Baton Rouge, La. Nikko had 13 points and eight rebounds in the game.

Missouri almost did it.

In a game in which it was a heavy underdog, Missouri blazed out to its best first half since Jan. 11 against Florida.

Cuonzo Martin’s team held No. 25 LSU without a 3-pointer in the first half, shot 7-of-13 from long range themselves and outrebounded the Bayou Bengals 18-12. You couldn’t conjure up a better start.

Everything that had to happen for the Tigers to steal a win in Baton Rouge was happening; the lead even stretched to 12 points on multiple occasions.

But Missouri, a team that allows the fifth-most points from the free-throw line in all of college basketball, was again crippled by its fatal defensive flaw.

LSU made 17-of-20 free-throw attempts in the first half, allowing Will Wade’s team to keep the halftime deficit to just six points. The No. 4 ranked LSU offense woke up in the second half, making all three of its 3-pointers and getting to the foul line for 12 more free throws. Despite leading for 32 minutes, Missouri fell just short against LSU, losing 82-78 and failing to pick up its first conference road win of the season.

“Our guys did a tremendous job but just came up short,” Martin said on his postgame radio interview with KTGR. “It’s a tough one.”

Heading into the game, it was apparent Missouri would not have as much success getting to the free-throw line against LSU’s strong interior defense as it had against Arkansans’ more porous unit. However, LSU even exceeded those expectations, outscoring Missouri by 22 at the charity stripe and finishing with a ludicrous FTA/FGA ratio of 0.642.

With Missouri ahead 69-65 and just under 7 minutes to play, LSU used a 7-0 run punctuated by a Darius Days 3 to pull ahead 72-69 with 4:44 remaining, a lead it would not relinquish. Missouri had chances down the stretch but was out-executed by one of the nation's best teams in close games. Keeping the game close on the road against a Top 25 team is a good sign from Missouri. Now the team needs to take the next step and close those games out.

After losing the battle on the glass in the first half, LSU outrebounded Missouri by five in the second half. Ahead by three with just 26 seconds to play, Day got his hands on an offensive rebound and made a tough, deep hook shot to push the LSU-lead to two possessions.

“When you’re going toe to toe against one of the better teams in our league your margin for error is so slim,” Martin said. “We’ve got to get those box-outs, got to make those plays down the stretch. They made those plays to win the game.”

Skylar Mays, LSU’s All-SEC caliber senior guard, kept his team in the game through a rocky first half, scoring a game-high 23 points on 7-11 shooting.

Despite the loss, there are a lot of positives to take away from Missouri’s performance, one of the best of its season.

Freshman Tray Jackson has had two breakout performances against Tennessee and Arkansas and earned the trust of Martin to play big minutes down the stretch of a close game. While Jackson didn’t score in the second half, he scored nine first-half points, and his offensive spark was a major factor in Missouri building its lead.

"I’m so happy for him because he was at a low point from a standpoint of not playing," Martin said. "He stayed in the gym, continued to work, didn’t complain, didn’t make excuses. Now you see the result. He’s a talented player. There’s no question about that. There are things he continued to work on and he stayed the course. He never made excuses about it. Now you’re seeing the results. These last two games he played in critical situations for us."

Xavier Pinson followed up his career-high in points against Arkansas with nine points, seven assists and six rebounds against LSU. While Pinson’s shot wasn’t falling from 3 (0-5) he had only one turnover and was 4-6 on shots around the rim — a great sign for the young playmaker.

Missouri got contributions from up and down its roster against LSU — even with Mark Smith and Jeremiah Tilmon Jr. out — but it just wasn’t enough.

Javon Pickett chipped in with 10 points, had a few hustle plays that have become his calling card and played all but two minutes.

The Tigers frontcourt held its own. Reed Nikko had 13 points and eight boards while Mitchell Smith added 10 and six.

The Tigers from Louisiana had frontcourt production to match though, with Days dropping a 20-point, 10-rebound double-double.

Missouri will get another chance for an upset at 5 p.m. Saturday at Mizzou Arena when it hosts the red-hot No. 11 Auburn Tigers.

SEC in review: Kentucky back on top of SEC standings

PHOTO GALLERY: Missouri attempts to make a comeback but game ends in a loss

Fourth quarter comeback not enough as Missouri falls to Florida

NCAA moves toward immediate eligibility for all transfers

Kershaw to Dodgers: Use anger over cheating Astros as fuel