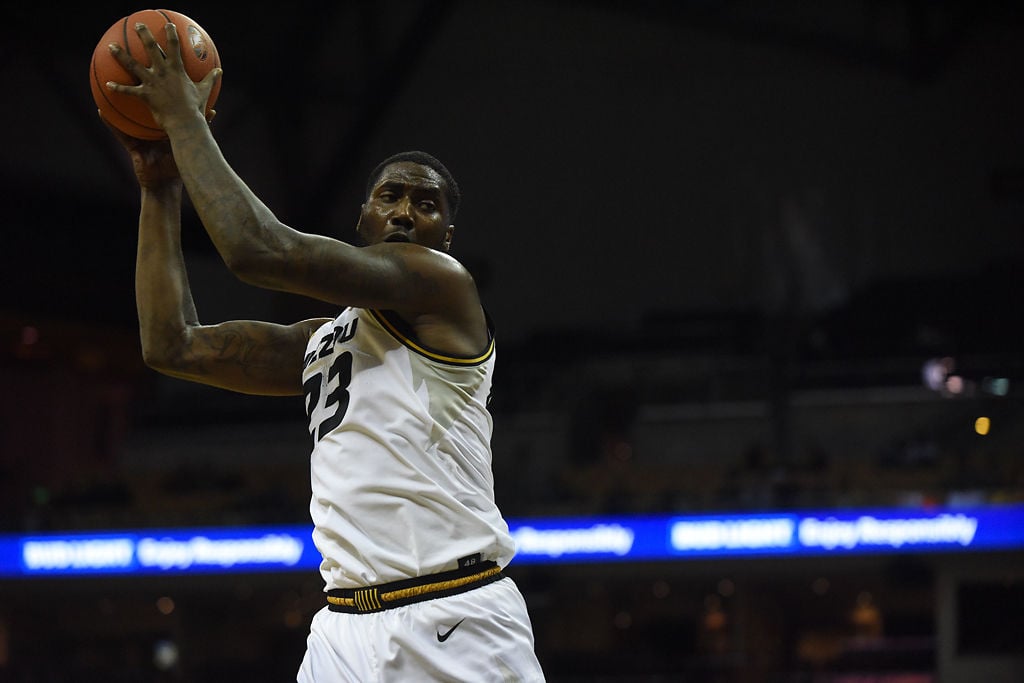 Jeremiah Tilmon comes down with a rebound in the first half during Missouri's game against Incarnate Word on Wednesday at Mizzou Arena. 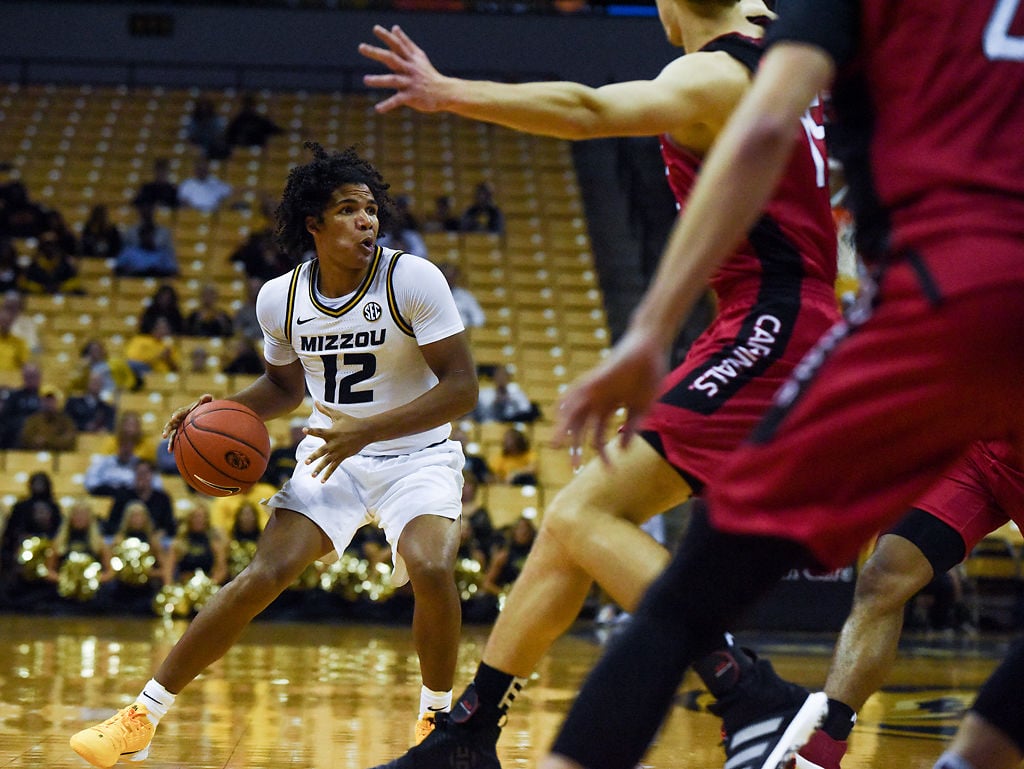 Missouri guard Dru Smith looks to pass the ball from the perimeter during the Tigers' game against Incarnate Word on Wednesday at Mizzou Arena. 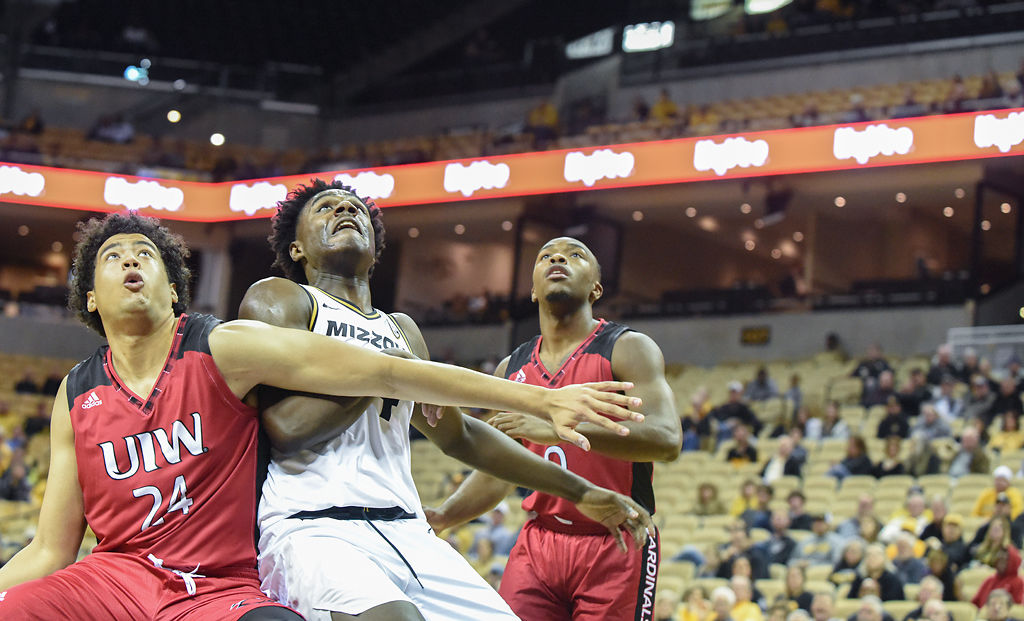 Missouri freshman forward Kobe Brown battles in the paint to get position for a rebound in the first half during Missouri's game against Incarnate Word on Wednesday at Mizzou Arena. 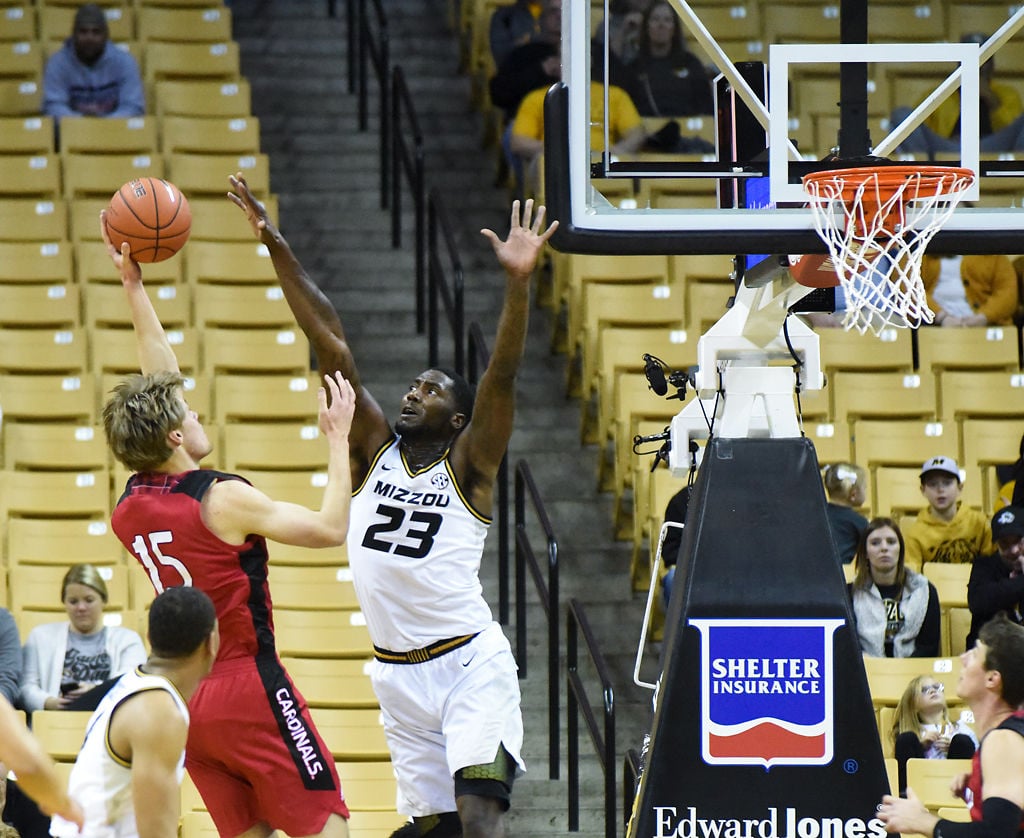 Missouri center Jeremiah Tilmon jumps to block the shot of Incarnate Word forward Marcus Larsson during Wednesday's game at Mizzou Arena. Tilmon had a career-high five blocks in the game and the Tigers won 82-42.

Jeremiah Tilmon comes down with a rebound in the first half during Missouri's game against Incarnate Word on Wednesday at Mizzou Arena.

Missouri guard Dru Smith looks to pass the ball from the perimeter during the Tigers' game against Incarnate Word on Wednesday at Mizzou Arena.

Missouri freshman forward Kobe Brown battles in the paint to get position for a rebound in the first half during Missouri's game against Incarnate Word on Wednesday at Mizzou Arena.

Missouri center Jeremiah Tilmon jumps to block the shot of Incarnate Word forward Marcus Larsson during Wednesday's game at Mizzou Arena. Tilmon had a career-high five blocks in the game and the Tigers won 82-42.

Heading into the season, junior Jeremiah Tilmon has been billed as Missouri’s main star, with teammate Mark Smith calling him “the best big in the SEC.”

Missouri couldn’t have asked for a better start to the season from its preseason All-SEC center. Tilmon put up 16 points, grabbed seven boards and blocked a career-high five shots during Missouri’s 82-42 blowout win against an overmatched Incarnate Word squad in its season opener.

“I thought Jeremiah was solid; he did a really good job blocking shots,” Missouri coach Cuonzo Martin said. “I thought he did the best job since he’s been in a Mizzou uniform having a presence around the rim.”

Missouri got off to an incredibly slow start on offense, missing its first seven 3-pointers and shooting just 3-for-10 from the field over the first five minutes.

Luckily for the Tigers, they were playing Incarnate Word, who is No. 345 in the nation according to KenPom. The Cardinals turned the ball over on their first four possessions and went until the 15:09 mark without a made field goal, allowing the Tigers’ sloppy start to slide.

It was clear from the first possession that Tilmon would be a major mismatch all night. When Missouri started feeding him, things started to turn around. With eight minutes left in the half and Missouri ahead 18-12, Tilmon sparked a 10-2 run.

After an entry pass to the post from Pinson, the big fella drop-stepped and threw down a powerful two-handed slam. He scored a layup on the next offensive possession and then swatted a shot on the other end. But he wasn’t done.

The next two possessions? An and-1 layup and a high-flying alley-oop dunk off another assist from Pinson to punctuate the run, his team now doubling up Incarnate Word 28-14.

“I can go higher for sure,” Tilmon said about his alley-oop slam.

Tilmon picked up four fouls throughout the game but didn’t let it affect his play, a new mindset he’s been preaching all offseason.

“Like I said I don’t worry about fouls when I hoop,” Tilmon said. “I’m just playing.”

Missouri wouldn’t look back from there, going on a 16-0 run shortly after to build a 52-22 lead just three minutes into the second half. The Tigers would outscore the Cardinals 30-20 over the remaining 17 minutes.

While the Tigers cruised to victory, they struggled shooting 3-pointers all game, finishing 7 for 31 from long range, good for 22.6%. It’s not that they weren’t getting open looks: Tilmon was drawing constant double teams in the post leading to open corner 3s. Dru Smith shined whipping skip passes to find open corner shooters as well. The shots just weren’t falling.

Dru Smith was methodical in the first half and didn’t attempt a single shot, but remained effective running the offense and finished with eight points, four boards and five assists.

Martin will be encouraged with his team’s defensive performance. The Tigers limited the Cardinals to 16.7% from 3-point range, an area where they struggled in their exhibition against a similarly talented Central Missouri team.

Mark Smith struggled in his first regular-season game after a season-ending foot injury last year. Smith shot 45% from 3-point range last season, but missed all four of his attempts against Incarnate Word to end the night scoreless.

“When he’s open, they’ve gotta fly,” Martin said. “There’s no question about that. I don’t worry about that.”

In the preseason, Martin indicated how important the four position is for the Tigers.

Freshman Kobe Brown got the majority of the minutes at the four and continued his good start from Friday, scoring nine points on 3 of 7 shooting from the field. He showed aggressiveness attacking closeouts, something Martin has emphasized all offseason, while also shooting 40% from 3-point range on five attempts.

Another freshman, former Vashon star Mario McKinney, Jr., impressed in his 14 minutes off the bench. McKinney scored seven points on 3 for 4 shooting, including an emphatic second-half dunk.

It will be easier to judge Missouri after Friday’s game against Northern Kentucky, an NCAA Tournament team last season. While the Norse lost their best player and head coach from last year’s squad, they won their season opener by 50 points and should help the Tigers better prepare for next week’s all-important matchup at Xavier.

What: Missouri vs Northern Kentucky

How to watch: SEC Network+

With 15 points, flashy passes and effective playmaking, the sophomore point guard looked and felt much-improved with the ball in his hands in the Tigers' 82-42 season-opening drubbing.

'My mission was to win': Coco tops Venus at Australian Open