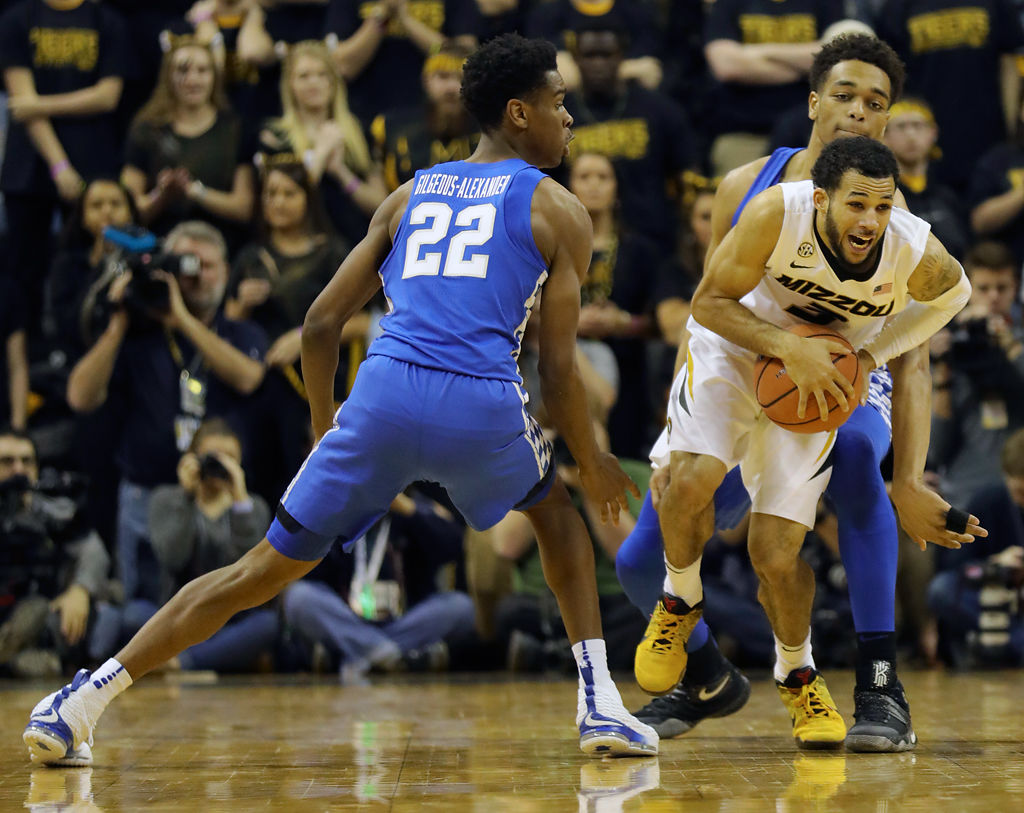 Missouri guard Kassius Robertson breaks away from Kentucky guard Shai Gilgeous-Alexander and forward PJ Washington on Feb. 3, 2018 at Mizzou Arena. Robertson was one of Missouri’s top scorers with 16 points. 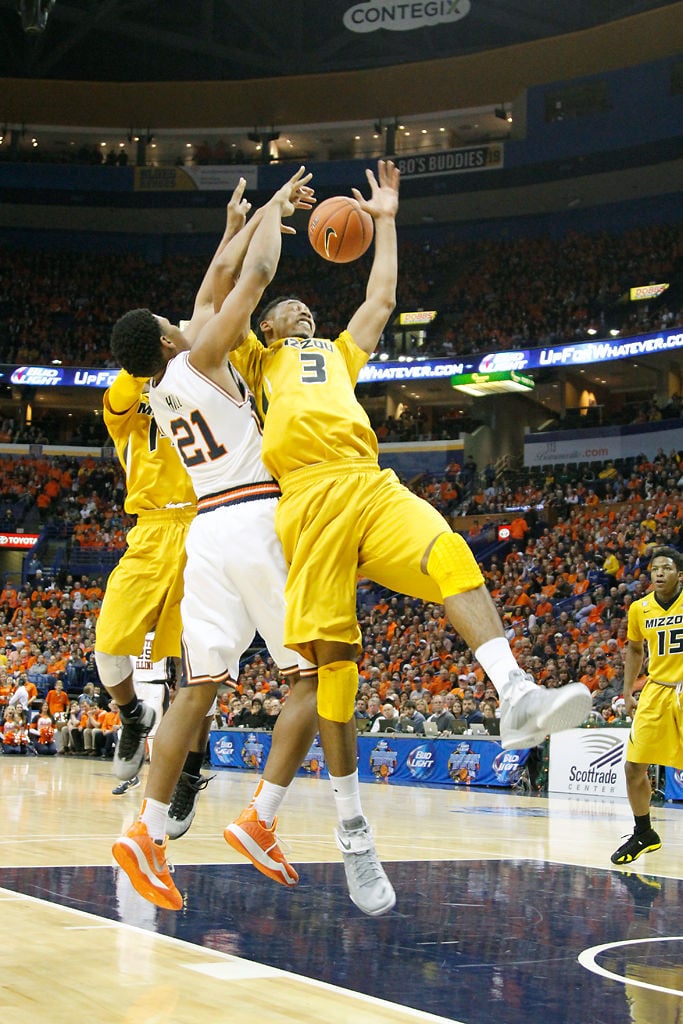 Illinois guard Malcolm Hill, Missouri forward Johnathan Williams III and Missouri guard Keith Shamburger grapple for possession of the ball on Dec. 20, 2014 during the Braggin' Rights game against Illinois at the Scottrade Center in St. Louis. 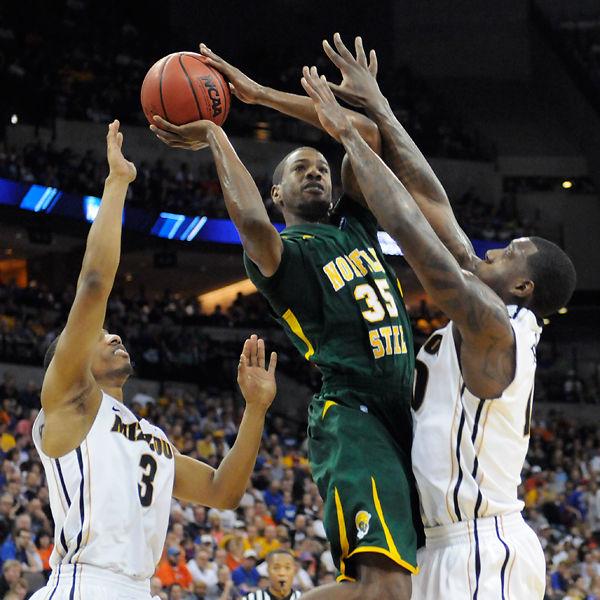 Missouri players attempt to block a shot in the 84-81 upset loss to 15-seed Norfolk State in the first round of the 2012 NCAA Tournament. 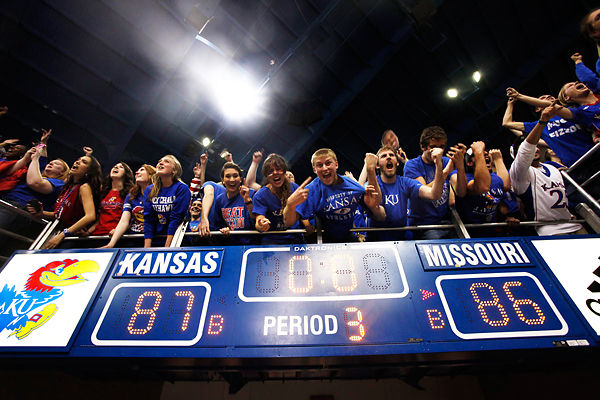 Missouri guard Kassius Robertson breaks away from Kentucky guard Shai Gilgeous-Alexander and forward PJ Washington on Feb. 3, 2018 at Mizzou Arena. Robertson was one of Missouri’s top scorers with 16 points.

Illinois guard Malcolm Hill, Missouri forward Johnathan Williams III and Missouri guard Keith Shamburger grapple for possession of the ball on Dec. 20, 2014 during the Braggin' Rights game against Illinois at the Scottrade Center in St. Louis.

Missouri players attempt to block a shot in the 84-81 upset loss to 15-seed Norfolk State in the first round of the 2012 NCAA Tournament.

EDITOR’S NOTE: The Missourian presents a three-part series that looks back at the highs and lows of Missouri men’s basketball over the last decade. This is Part Two.

It was largely a disappointing decade for Missouri men's basketball.

The decade featured two conferences, four different head coaches, and generally, a lot of losing. Let’s relive the top five most memorable games of the 2010s .

The 2014-15 season, the first of Kim Anderson’s tenure, was one Missouri fans would largely like to forget.

That season’s edition of Braggin’ Rights featured two teams that missed out on the NCAA Tournament but improbably produced the most exciting game of the decade between the Tigers and Illini.

After Wes Clark made a tough shot over 6-foot-11 Illinois forward Nnanna Egwu to tie the game at 59, Illini guard Rayvonte Rice held the ball for the last shot.

He used a screen from Egwu to get the switch he wanted and nailed a contested step-back 3-pointer at the buzzer to win the game for Illinois. Rice, the best player on that Illini team, had a fairly illustrious career for the Illini, but this was easily his most iconic moment.

The win was the second in a six-year stretch of victories for Illinois, and the closest Anderson would ever come to defeating Missouri’s Big Ten rival as head coach.

Missouri forward Jonathan Williams led the Tigers in scoring with 19 points in his last Braggin’ Rights game with the team before transferring to Gonzaga for his final two seasons. Williams recently signed a contract with the Washington Wizards on Dec. 26 after playing in Israel for a season.

It is also the biggest win of the Cuonzo Martin tenure so far. Mizzou Arena was rocking as Missouri announced itself as a likely NCAA Tournament team, even without injured No. 1 recruit Michael Porter Jr.

While that season will always be remembered for the Porter injury saga, wings Kassius Robertson and Jordan Barnett were the clear leaders of the team. Both scored 16 points and outclassed Kentucky’s future NBA lottery pick Kevin Knox, who visited Columbia with Porter Jr. before committing to the Wildcats.

The 2017-18 version of Kentucky isn’t the most dominant Wildcats team in recent memory but the team featured current NBA star Shai Gilgeous-Alexander and reached the Sweet Sixteen before falling to Bruce Weber’s Kansas State 61-58. A banged-up Tigers team reached the NCAA Tournament for the first time since 2013, losing to Florida State in the first round.

Missouri’s stifling defense was the key in a back-and-forth game that was close until Missouri pulled away with a 15-5 run.

The Tigers led the NCAA with almost 11 steals per game that season and showed why against Clemson. Missouri stole the ball 15 times, converting those chances into 20 points.

Clemson’s leading scorer and one of the best players in program history, Trevor Booker, was held to just 11 points in his last collegiate game.

While Missouri fell to Bob Huggins’ West Virginia in the next round, the Tigers upset of Clemson was a high point in a rough decade for Missouri basketball.

This list wouldn’t be complete without one of the worst losses in Missouri sports history, which is saying something for a fan base that’s been through the Fifth Down Game.

Missouri’s 2012 season, its last in the Big 12, was in many ways a dream season for Missouri basketball. The Tigers started the season 14-0, beat Kansas and won the Big 12 tournament. Entering the NCAA Tournament as a No. 2 seed against obscure Norfolk State, Missouri was a popular pick to reach the Final Four for the first time in program history.

With just over 30 seconds left in a tie game, Norfolk State air-balled a jumper but future NBA player Kyle O’Quinn was there for the and-1 putback layup to put the Spartans up 84-81.

After an off-balance 3-point attempt from senior Marcus Denmon fell short, O’Quinn knocked down another free throw to extend the lead to four. Phil Pressey hit a huge 3-pointer to bring the Tigers within one, but his 3-pointer to tie the game fell short as time expired.

It was all downhill after that for the Frank Haith era at Missouri and one of the best seasons in Tiger history ended with one of the biggest ever upsets March Madness has ever seen.

What other game did you expect to see at the No. 1 slot on this list?

Earlier last October, Missouri, and Kansas announced the resumption of the Border War, beginning next season in Kansas City. But for the majority of the last decade, the two bitter rivals did not play after Missouri left the Big 12 for the greener pastures of the SEC.

Both of the team’s meetings during 2012, the Tigers last season as part of the Big 12, were instant classics. It felt unfair to just select one of the two, so we will discuss both here.

College Gameday was in the house for the game where Denmon scored 29 points and became a Missouri legend by sparking an improbable comeback.

With just over two minutes left in regulation, Kansas was ahead by eight. Denmon was in the midst of an intense shooting slump but picked the right time to snap out of it against the Jayhawks. Denmon sunk an and-1 layup and after a charge on Kansas’ next possession, came off a screen to nail a 3 that cut the lead to two.

He wasn’t done. The next trip down, Denmon nailed another 3, this one from the corner, to put Missouri ahead once and for all, 72-71.

Kansas got its revenge, though, in the team’s last meeting at Allan Fieldhouse three weeks later on Feb. 25.

No. 3 Missouri jumped out to an early 19-point lead and had sucked the life out of a rabid Border-War crowd. But just like the Tigers, No. 4 Kansas fought back, tying the game at 75 with 10 seconds to play.

Then comes the play that neither fan base will ever forget (or stop arguing about).

Phil Pressey froze his defender with a hesitation and drove toward the basket for the game-winning basket. Kansas star forward Thomas Robinson met him there and emphatically blocked his shot, sending the game into overtime as Missouri fans yelled about a foul call that would never come.

After a hard-fought overtime, Denmon made a tough runner to put Missouri ahead 86-85 with 12 seconds to play. Kansas’ Tyshawn Taylor wasted no time, attacking Missouri in transition and drawing a foul. He would hit both free throws to put the Jayhawks ahead.

Missouri wouldn’t even get a shot off as Kansas won the game 87-86, splitting the final Border War. Last decade's Border War ended about as spectacularly as possible. If this decade's clashes are anything similar, college basketball fans are in for a treat.

PART ONE: Missouri's five most defining stories of the decade.

SEC in review: Kentucky's win at Texas Tech the highlight of the Big 12/SEC Challenge

Tigers overwhelmed by Aggies despite absence of Chennedy Carter