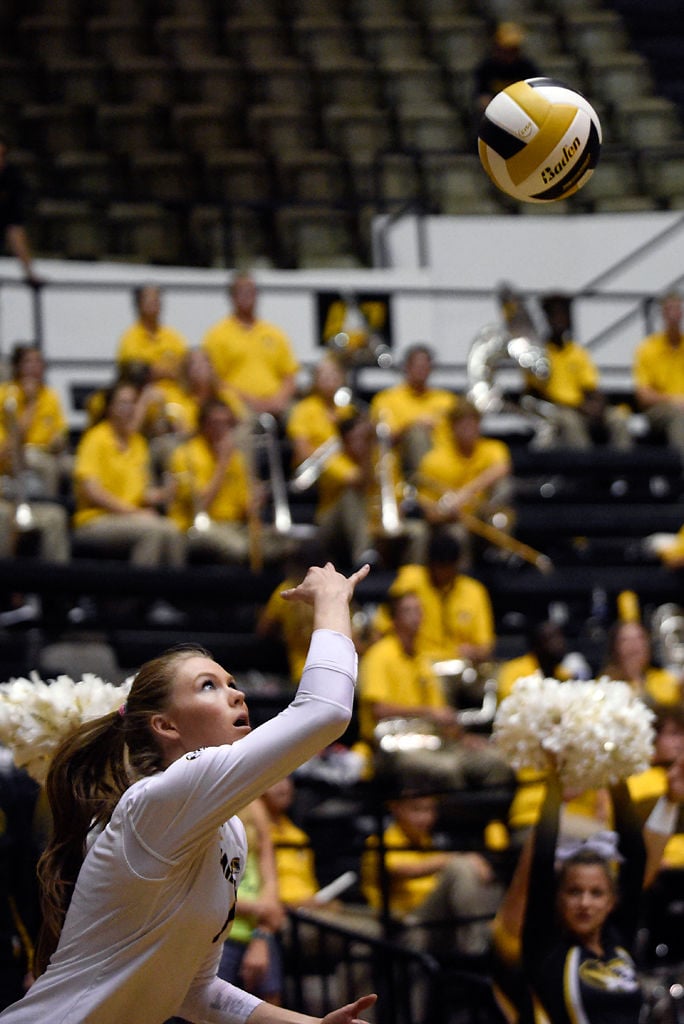 Melanie Crow tosses the ball for a jump serve against Kentucky on Sept. 20 at the Hearnes Center. 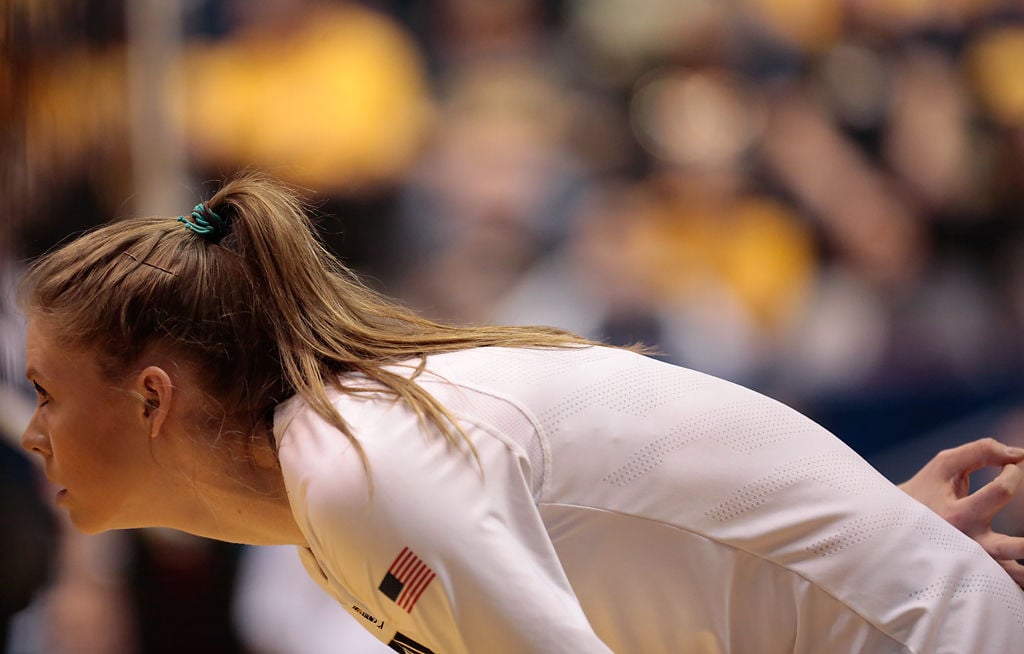 Missouri outside hitter Melanie Crow stares through the net during the second set of the Tigers' Dec. 1 match against Northern Illinois at Hearnes Center. 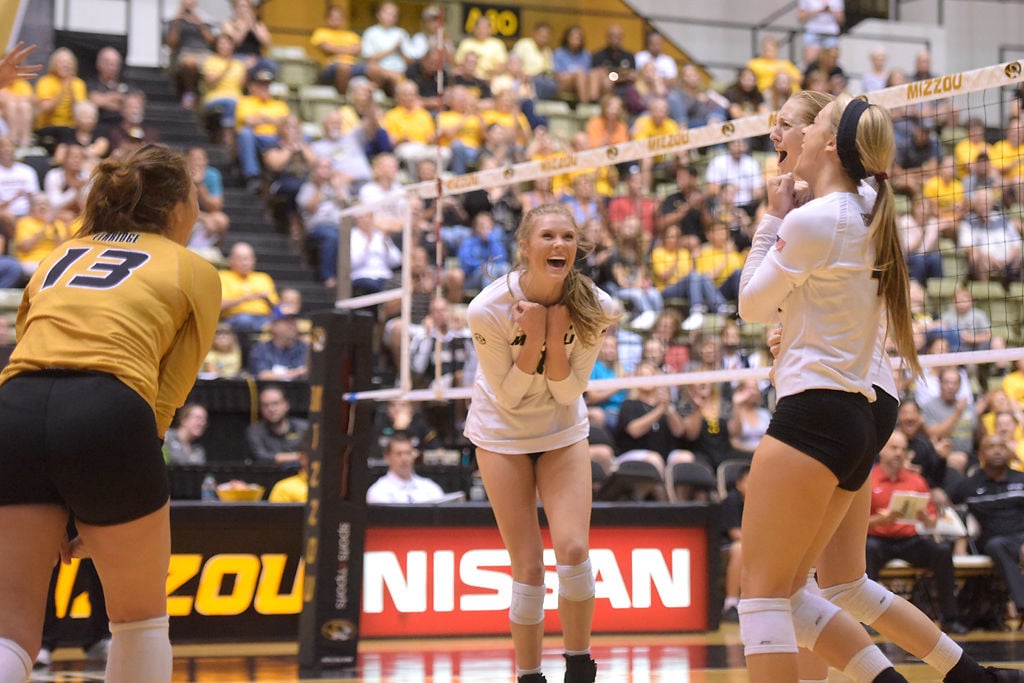 Melanie Crow tosses the ball for a jump serve against Kentucky on Sept. 20 at the Hearnes Center.

Missouri outside hitter Melanie Crow stares through the net during the second set of the Tigers' Dec. 1 match against Northern Illinois at Hearnes Center.

Melanie Crow never imagined the career she'd have as a Tiger.

"I had absolutely no idea what I was walking into at Mizzou," she said. "I didn't know how good Mizzou was either. It was all brand new."

When Missouri volleyball's redshirt senior transferred from Ole Miss in 2016, she didn't anticipate having such an impact on the court or in the community.

The Crow family, residents of Wildwood, Missouri, all contributed to Melanie's transfer. Her father, Terry Crow, thought the transfer process would have been more strenuous. The fear was that Melanie would have to sit out a year before playing.

"We had to write letters to the commissioner of the SEC, and there was a small waiting period before we heard," he said. "The athletic director at Ole Miss was very helpful, too, and Mel was able to go to the only school she wanted to go to."

The redshirt senior herself felt a difference after her departure from Ole Miss.

"Looking at my story, a rich, healthy environment only helps," Crow said. "My situation was completely different there, and the positive environment here has led to us prospering as a team."

Crow's transition into the Missouri environment could have been difficult, but the Tigers treated Crow like one of their own immediately.

"It was seamless with Mel," said fellow redshirt senior Kira Larson. "She's great to have, because, as a transfer, she wasn't a freshman. She had played a lot of volleyball and added talent right away."

Crow's father shares Larson's opinion of how his daughter was integrated within the Missouri volleyball program.

"(Melanie) was accepted into a competitive group of girls," said Terry Crow. "The Kreklows (Missouri's coaches) are a class-act and their objective has always been to make sure the players have the best experience and we stood behind it."

Crow's teammates were able to offer a warm yet competitive environment. She was able to return the favor with an intense focus and a contagious competitive attitude.

Junior Alyssa Munlyn, another key player in Missouri's success, feeds off of Crow's focus during play.

"She's very direct and has tunnel vision," Munlyn said. "As a leader, she gets us focused by just wanting to do her job and just focusing on volleyball."

Since her arrival, the outside hitter was named to the 2016 All-SEC team, the Tigers won the 2016 SEC Championship, and they finished in the Sweet-16 in the 2016 NCAA Tournament. Crow was also named an American Volleyball Coaches Association All-American last season.

The accolades don't stop there for Crow: earlier this season, she moved onto the Tigers' top-10 lists for both kills and points. Her 1,236 kills place her at ninth all-time while her 1,467 points have her at tenth.

Crow's teammates have taken notice of her impressive achievements and are proud of what Crow has accomplished.

"We call her MC Hammer for a reason," Munlyn said. "She does not care who you are or what kind of block you attempt. She is going to blast it."

"The younger players want to resemble (Crow's) play," Larson added. "(Her) never-die attitude to score points when we're up or down 10 to 15 points is always there."

Crow has not only made a difference for the Tigers on the court, but off the court as well. Her contributions have earned her a nomination for the 2017 Senior CLASS Collegiate Volleyball Award for excellence in four areas: community, classroom, character, and competition.

"(The nomination) is an awesome honor," Crow said. "As a student athlete, it's something you strive for. You want to be a leader for your team and your community."

"We're very proud of Melanie and what a well-rounded person she is," coach Wayne Kreklow said. "She is a great representation of what our program is all about: excellence in the court, in the classroom, and in the community."

Crow's impact in the community has allowed her to work at MU's Women's and Children's Hospital, as well as in the back of an ambulance. "I love helping out with people, especially kids," Crow said. "Helping out in that wing and being able to brighten someone's day is an amazing feeling."

Crow's generous contributions to the hospital are giving her experience not only as a good Samaritan, but also as a future physician's assistant (PA), which is what Crow hopes to be after her career at MU.

"I'm not a big planner, I'm a doer," said Crow about her experience. "Having a lot of hours helping people is what I need to do ... and what I want to do."

According to Terry Crow, his daughter has always had the passion to help others and to have an impact in the medical field. Even in Oxford, Mississippi, she'd volunteer at a food pantry every week.

"Mel has always been motivated playing sports but it's also got a lot to do with wanting to help people," Terry Crow said. "She's got a cousin that's a PA, and a lot of others in our family are in the medical field. Getting together always had her talking about what she wanted to do."

Though Crow has her goals off the court, she is heavily focused on continuing the Tigers' success this season.

"We need to stay hungry and execute at a high level," Crow said. "We are one hundred percent invested in achieving more this season. ... We're trying to stay consistent and be clean moving forward."

Crow's attitude to continue her team's overall success regardless of individual success is note-worthy. Her achievements on the court, in the classroom, and in the community is something to be celebrated.