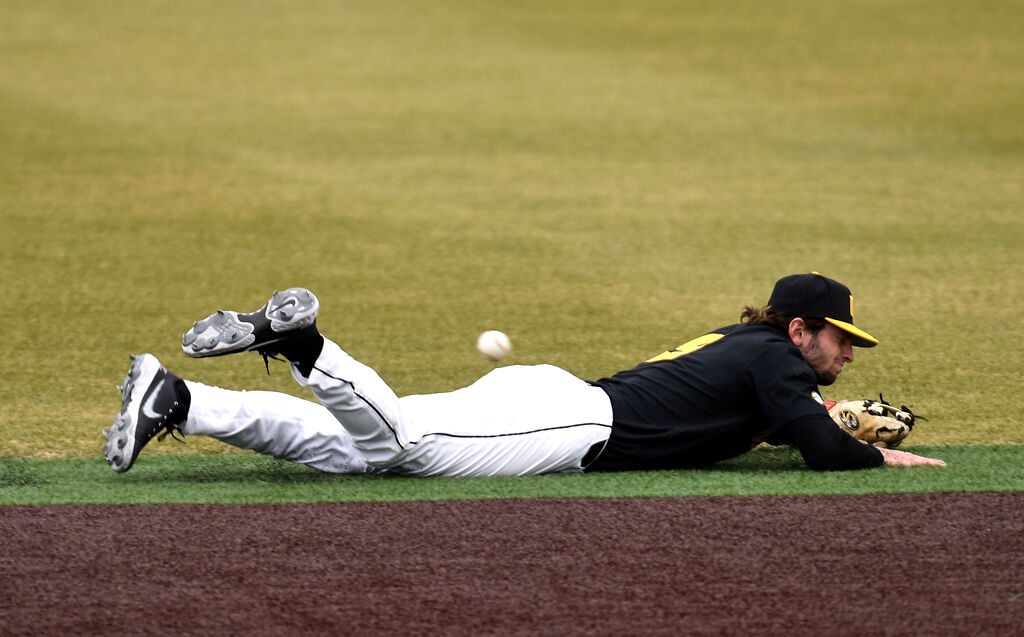 Missouri infielder Mark Vierling dives for a ground ball during the sixth inning against Omaha on Sunday at Taylor Stadium in Columbia. Vierling has recorded a hit in all eight of Missouri's games this season. 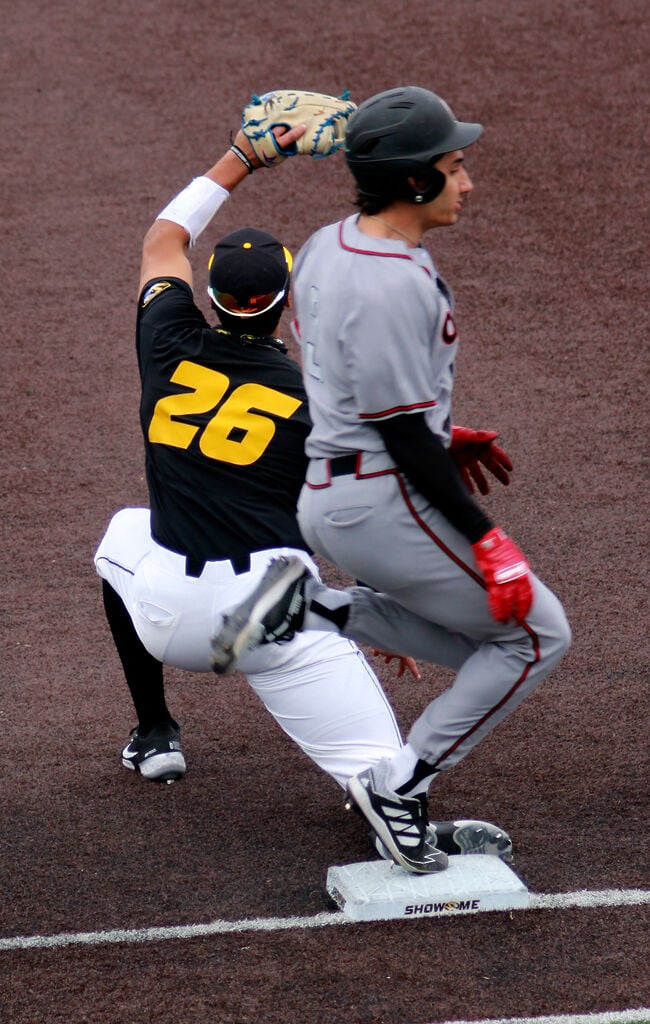 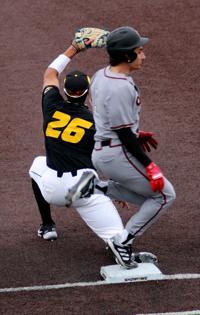 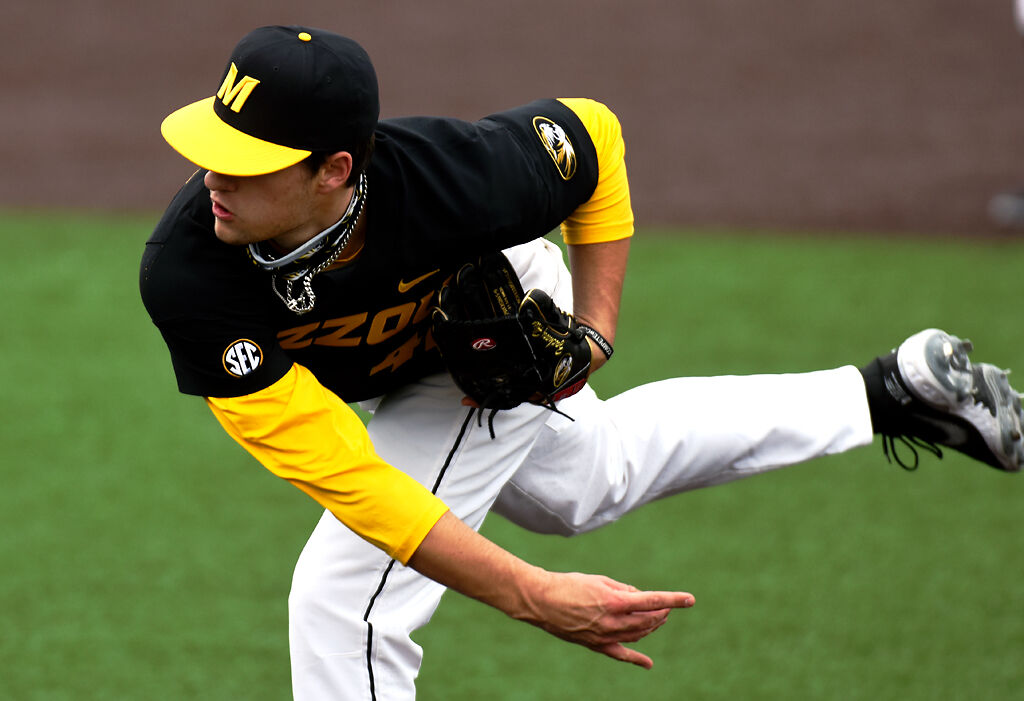 Missouri pitcher Zach Hise pitches during the game against Omaha on Sunday at Taylor Stadium in Columbia. Hise, a freshman on Missouri baseball, had two strikeouts against the Mavericks on Sunday.

Missouri infielder Mark Vierling dives for a ground ball during the sixth inning against Omaha on Sunday at Taylor Stadium in Columbia. Vierling has recorded a hit in all eight of Missouri's games this season.

Missouri pitcher Zach Hise pitches during the game against Omaha on Sunday at Taylor Stadium in Columbia. Hise, a freshman on Missouri baseball, had two strikeouts against the Mavericks on Sunday.

The question for Missouri baseball going into Sunday against Omaha was whether the Tigers had turned the corner from a sloppy start to the season.

The Tigers dropped their series finale to the Mavericks 9-3 after giving up six runs in the ninth.

It was another pitching breakdown for Missouri, but what was more surprising was the lack of run support.

Aside from a two-run six inning and a score in the third, Missouri's bats were uncharacteristically quiet Sunday. The Tigers recorded five hits, with none coming after the sixth inning. Missouri had averaged 7.4 hits before Sunday.

The offensive disappointment is somewhat surprising after the Tigers scored 12 runs Friday and then 22 in Saturday’s doubleheader.

“You can’t play like we played last night and then turn around and have a game like today,” Missouri coach Steve Bieser said.

Tiger hitters didn’t start slow. Missouri (3-5) led off with two singles and a fielder’s choice. After a Chad McDaniel walk, Missouri had the bases loaded with just one out. But right fielder Andrew Keefer ruined the scoring opportunity with a grounder to short for a double play.

Bieser said the lack of success could be chalked up to an impatient approach at the plate. He said that Missouri hitters looked "antsy" in the box, especially in the second inning, when Missouri batters went down in order after only seeing four pitches from Omaha starter Richie Holetz.

The second was one of four innings in which Missouri went down 1-2-3, and on two other occasions Omaha (3-3) only faced four Missouri batters.

Mark Vierling continued his eight-game hitting streak with an RBI single in the third. Keefer and third baseman Luke Mann had the Tigers' other two RBI.

Brandt Belk was missing from the lineup this weekend. Bieser said there was “no reason” he was out of the lineup and that he would be back for next weekend's Frisco Classic . Belk broke out for the Tigers in 2019 with a .457 average and 1.62 hits per game. His presence wasn’t necessarily missed for the first three games of the Omaha series, but Missouri could have surely used him Sunday.

After Missouri starter Jared Simpson gave up three runs in three innings, Spencer Juergens entered the game. The grad student was one of the only bright spots in Missouri's pitching last week at Grand Canyon.

Again, Juergens was the Tigers' most successful pitcher. He picked up where he left off in Phoenix, going four innings Sunday without giving up a run and only allowing two hits.

Simpson had conceded three runs in the second, and the pitchers that followed Juergens — Zach Hise and Holden Phelps — gave up six runs between them in the ninth. Bieser said Juergens felt good before he was pulled, but that the Tigers had a plan to rely on other arms to close out the game.

“We’ve got to rely on some other guys to do that part,” Bieser said. “There’s nothing from history that says that Zach Hise is not the guy that can get us through the next couple innings.”

Hise rewrote the history books with his outing, however. He started out great, retiring three Mavericks in order in the eighth, but things quickly unraveled in the ninth.

Chris Esposito led off with a triple, followed by Hise giving up a walk and recording a strikeout. From there, the scorecard turned bleak. Hise gave up a single to allow one run and walked a batter to load the bases., Then Omaha's Masen Prososki broke it open with a two-run double.

Phelps came in to record the last two outs but could not make them happen before Omaha scored three more to put the game out of the Tigers’ reach.

Where: RoughRiders Ballpark in Frisco, Texas

Where to watch: FloSports (streaming)