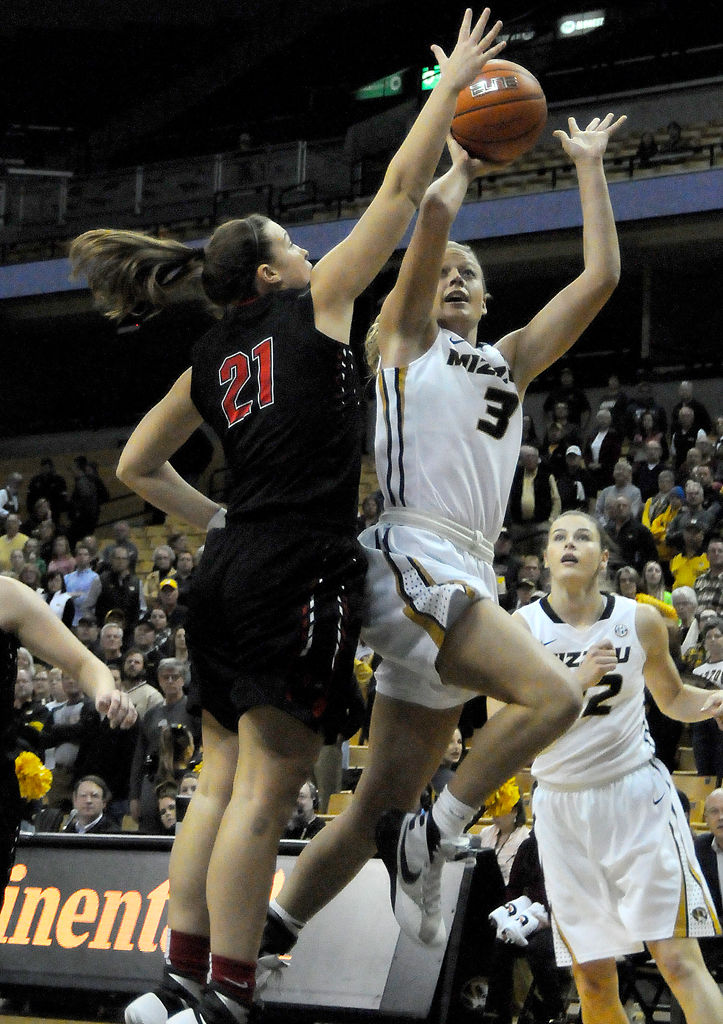 No. 3 freshman guard Sophie Cunningham attempts to score while being blocked by Southeast Missouri State senior forward Connor King on Dec. 2 at the Mizzou Arena. The Tigers defeated the Red Hawks 74-32. 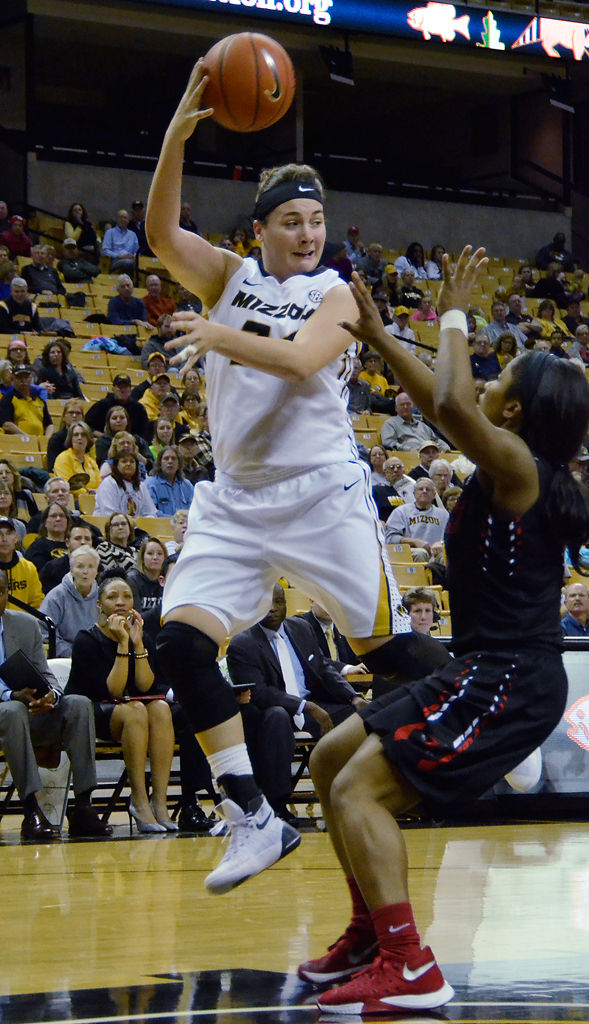 No. 24 junior guard Sierra Michaelis passes the ball over a Southeast Missouri State defender on Dec. 2 at the Mizzou Arena. The Tigers defeated the Red Hawks 74-32. 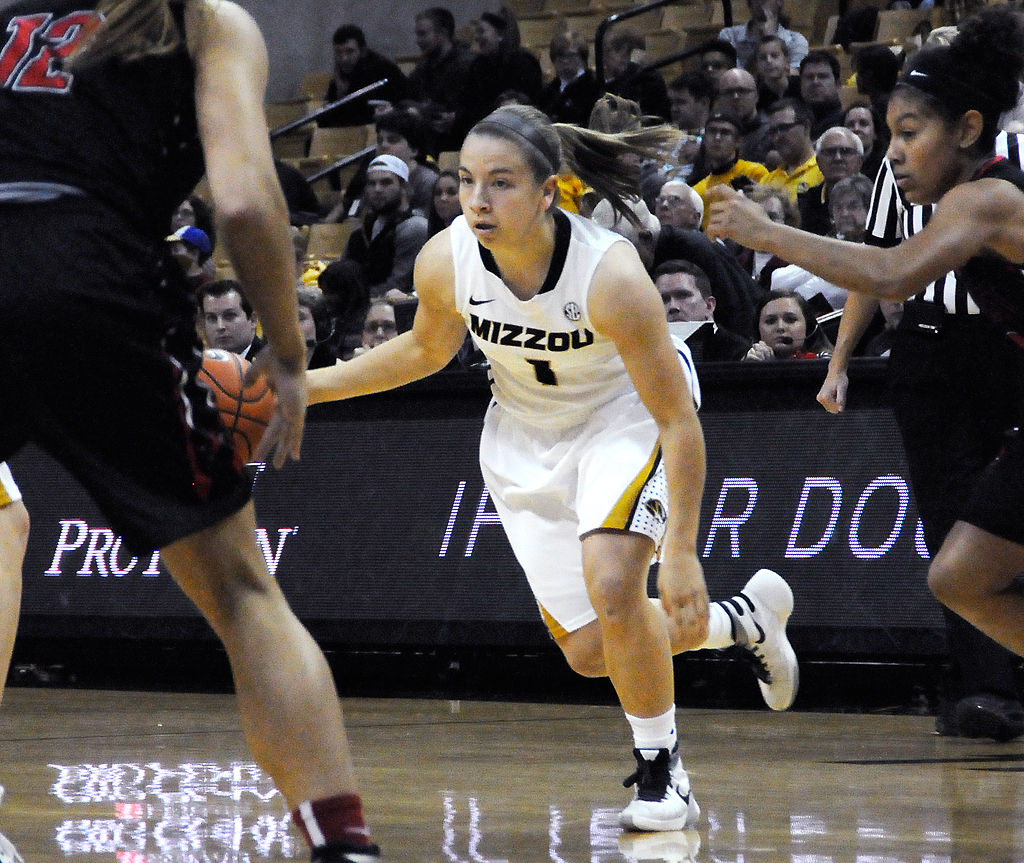 No. 3 freshman guard Sophie Cunningham attempts to score while being blocked by Southeast Missouri State senior forward Connor King on Dec. 2 at the Mizzou Arena. The Tigers defeated the Red Hawks 74-32.

No. 24 junior guard Sierra Michaelis passes the ball over a Southeast Missouri State defender on Dec. 2 at the Mizzou Arena. The Tigers defeated the Red Hawks 74-32.

COLUMBIA — The Missouri women’s basketball team has something special this season, and people are beginning to take notice. The 15th-largest home crowd in program history — 3,832 fans — showed up Monday at Mizzou Arena to watch the Tigers beat Loyola Marymount and match the team’s best ever start at 9-0.

If Missouri is victorious Saturday in a road game against Colorado, the record will be broken.

“To know that’s even a possibility, to take it further and make history — I mean, that’s awesome,” guard Lindsey Cunningham said. “It’s what we all came here to do, to turn this program around and take it to the next level.”

So, what’s different about the Tigers this season, and why are they so good?

If you didn’t know who Sophie Cunningham was at the start of the season — and if you didn’t, you were probably living under a rock — you do now. The freshman guard is as equally capable of driving to the basket as she is shooting from the perimeter, and she dropped a program-record 42 points versus Wake Forest on Nov. 22. The first McDonald’s All-American in program history is making her mark and leading the Tigers with 15.1 points per game.

The rest of the nation recognizes her talent, too; Sophie Cunningham has earned three Southeastern Conference Freshman of the Week honors in the past four weeks. She ranks 42nd in the NCAA and second in the SEC in field-goal percentage, shooting 56.2 percent.

Her Rock Bridge High School teammate, freshman forward Cierra Porter, isn’t far behind with 10.6 points per game. The 6-foot-4 Porter uses size to her advantage as a post player, drawing fouls and helping the Tigers collect second-chance points. She has eight made free throws, tied for second-best on the team. She also collected a career-high 16 points and nine rebounds against Northeastern on Nov. 27, earning her a spot on the Hilton Concord Thanksgiving Classic All-Tournament Team.

Coach Robin Pingeton originally thought the 2014-15 season was going to be Missouri’s breakout year. Cue a slew of injuries that forced remaining players into unfamiliar roles with stretched minutes, and Pingeton had to put that assessment on hold.

The team worked hard to make up for it in the offseason. Redshirt junior Lianna Doty, who sat out with a foot injury last year, said last summer was a turning point. With 11 returning players, the Tigers have had lots of time to get comfortable with each other and to develop their individual skills. It shows in their shooting.

Missouri is 25th in the nation with a field-goal percentage of 46.3, all while limiting opponents to 33.7 percent shooting. The Tigers also lead the SEC in 3-point field goals made.

“You can take a good shot or a great shot,” Doty said. “Maybe one pass and your percentage goes up. We definitely have an understanding of being in rhythm. Also, the older you get the more you know when you’re in rhythm.”

Pingeton said the Tigers rarely rely on just one or two players to “carry the load.” The Tigers rank 12th in the nation with 156 assists. Missouri had 28 assists in a 95-78 win over St. Mary’s, the most since also dishing out 28 assists in a 126-55 victory against Bradley in 2013.

Doty, who is fifth in school history for career assists with 326, said watching Missouri’s ball movement from the sidelines last season helped her see the big picture. The Tigers often cite the NBA’s San Antonio Spurs as inspiration for their smart shot selection and fluid ball movement.

Sophie Cunningham isn’t the only weapon Missouri has in its arsenal. Far from it. The Tigers have seen at least three players score double digits in seven games this season.

Pingeton can name a million things her team does well — and a million she wants to improve on — but one in particular sticks with her as the key to the Tigers’ historic run.

“I keep coming back to depth.”

Missouri’s bench is averaging a whopping 30.1 points per game. Part of that is the sheer availability of healthy players. In 2014, four players suffered injuries prior to opening night, and two were sidelined for the season by December. Right now this season, except for medically redshirted freshman Hannah Schuchts, everyone is good to go.

Missouri’s style of play can be summed up in one word: explosive. The Tigers have excelled at scoring fast break points, and if possessions are any indication, it’s easy to see why they win by an average of 26 points.

The Tigers have advantages in both size and athleticism, particularly on the inside. Missouri now ranks 17th in the country with 97 steals and has hit double-digit steals in five games. In practice, Doty said, coaches underscore the importance of the first three steps getting out of the lane.

With a chance to go 10-0 Saturday, excellence might very well be on its way.

NBC will not send announcers to Beijing for Winter Games

Georgia QB Bennett announces he will return for 1 more year