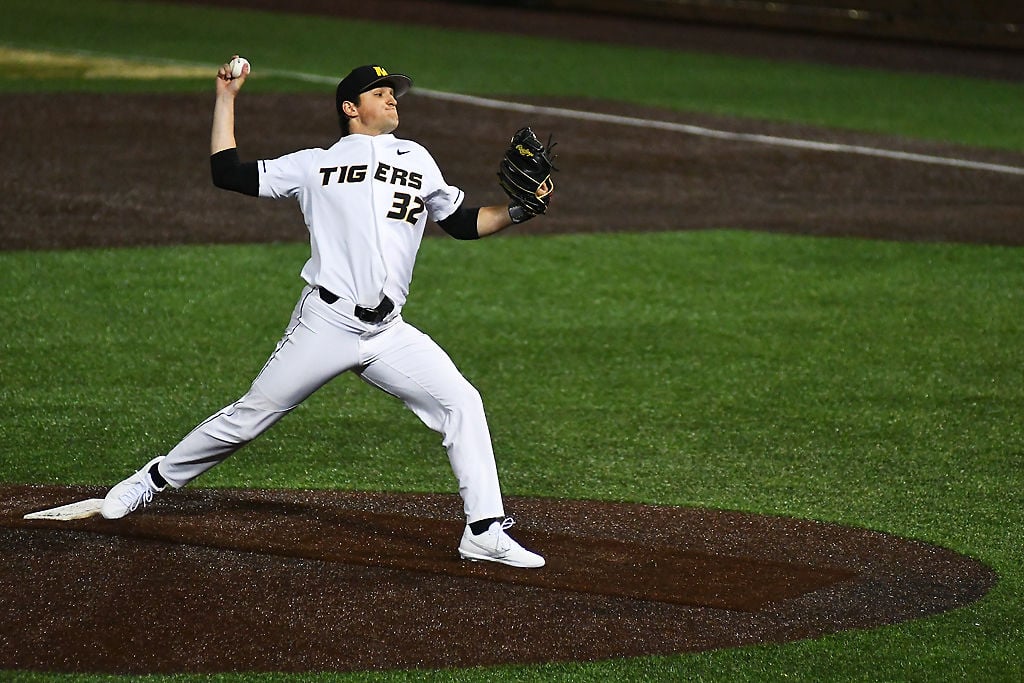 Missouri starting pitcher Ian Bedell fires a pitch March 6 at Taylor Stadium. Bedell, who recorded 12 strikeouts during the game, is expected to be taken in the middle rounds of the 2020 MLB Draft in June. 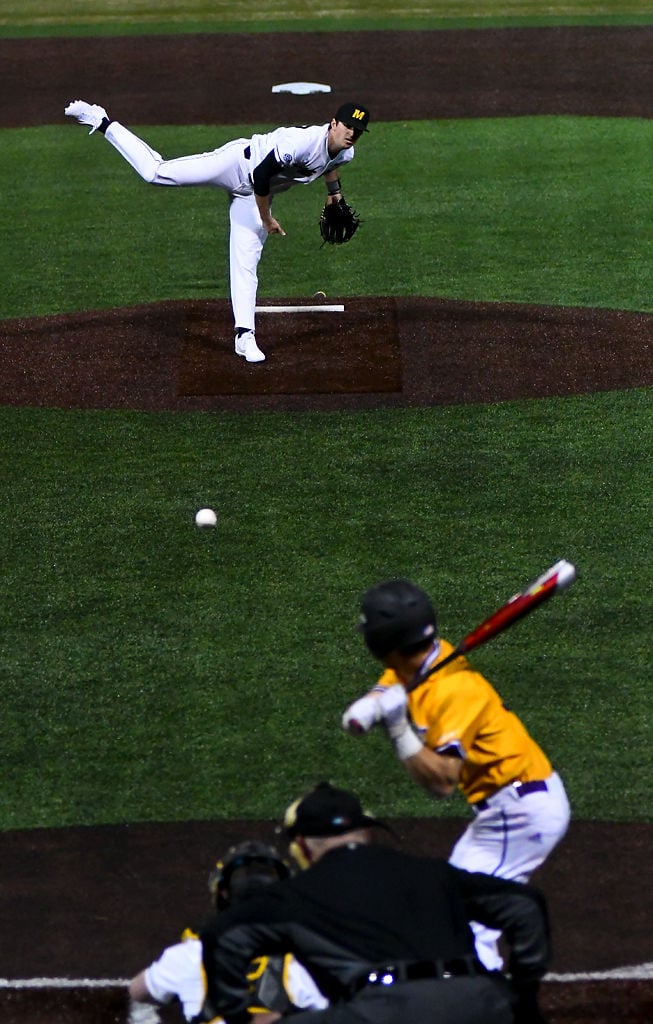 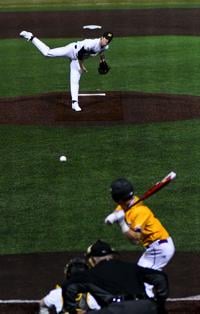 Missouri starting pitcher Ian Bedell throws a pitch to Western Illinois’ Kevin Raisbeck on March 6 at Taylor Stadium. Bedell is expected to be picked in the MLB Draft this June despite it being shortened to just five rounds.

Missouri starting pitcher Ian Bedell fires a pitch March 6 at Taylor Stadium. Bedell, who recorded 12 strikeouts during the game, is expected to be taken in the middle rounds of the 2020 MLB Draft in June.

Missouri starting pitcher Ian Bedell throws a pitch to Western Illinois’ Kevin Raisbeck on March 6 at Taylor Stadium. Bedell is expected to be picked in the MLB Draft this June despite it being shortened to just five rounds.

For Missouri’s Ian Bedell, the path to Major League Baseball started with T-ball when he was 4 years old.

He used to play in his backyard with his dad. Soccer, basketball and track were a part of his life growing up, too, but baseball was always where his passion was.

Over 16 years later, that passion has taken him into this spring with a chance to be picked in the MLB Draft, which is still expected to take place June 10.

“The name to know this year is Ian Bedell,” said draft expert R.J. Anderson, a staff writer at CBS Sports. “He has the chance for three above-average pitches and a relatively high floor. Could be a top 100 pick, depending on how things fall.”

Bedell reclassified and skipped his senior year of high school to come to Missouri in January 2018 and had a lot to learn in a short amount of time to prepare for his freshman season.

He has come a long way since and has transitioned from being an occasional relief pitcher to Missouri’s trusted Friday night starter.

Part of the reason Bedell progressed so quickly is because of the coaching staff he worked with.

Fred Corral, the Tigers’ pitching coach since August 2017, has mentored 86 players who have gone on to sign professional baseball contracts in his 27 years of coaching. Bedell could be the 87th.

“Coach Corral and the University of Missouri have done a really good job of preparing me for the next level. With the two and a half years I’ve been here, I’ve learned a lot,” Bedell said. “I think they’ve really done excellent work with not just me, but also other pitchers like TJ (Sikkema) and Cam Dulle and (Michael) Plassmeyer.”

Sikkema, Dulle and Plassmeyer all worked with Corral during their time at Missouri.

Sikkema was drafted 38th overall by the New York Yankees in 2019 after leading the Southeastern Conference with a 1.32 ERA, the third-best era in the NCAA, under Corral in 2019.

Corral said that it’s easy to coach a player who wants to work as hard as Bedell does.

“The thing we’ve gotta provide for Ian is a servanthood mentality and servanthood actions,” Corral said. “Ian Bedell’s dreams are our dreams as well. His growth is our concern.”

Bedell is expected to get a step closer to his dreams in June.

The draft, whenever it happens, is going to look different this year. It’s usually 40 rounds, but now it will be cut to just five.

That makes it more difficult for players hoping to get drafted, including Missouri designated hitter Peter Zimmermann. However, MLB has announced that teams will be able to sign an unlimited number of undrafted players.

“Zimmermann probably won’t be drafted, especially since the draft likely will only be five or 10 rounds this year,” MLB Draft Writer at Baseball Prospects Journal Dan Zielinski III said. “Could be an undrafted signing if he doesn’t want to return to Missouri next year.”

For Bedell, on the other hand, a shorter draft shouldn’t affect his chances much.

“Even if the draft is just five rounds, he (Bedell) should be drafted, probably in the third or fourth rounds,” The Athletic’s senior baseball writer Keith Law said.

Just because he seems to be a shoo-in for the draft doesn’t mean he’s ruling out a return to Missouri, though. He plans on seeing what his potential future team could have to offer before making a decision.

Becasue of the COVID-19 pandemic cutting seasons short, all spring athletes in the NCAA were given an extra year of college eligibility. Bedell is finishing his junior year and will have two more years of eligibility if he wants to return. It’s hard to feel a sense of closure on a season or a college career with Bedell and the team playing so well before the season was cut short.

In his first year as a starter, he pitched a team-high 24⅓ innings in four starts for the Tigers and recorded a team-high 35 strikeouts, going 2-2 with a 3.70 ERA.

Before his last start of the season against Western Illinois on March 6, Bedell tried out Synergy for the first time. Synergy is a video database that allows players and coaches to watch video replays of player’s at-bats. Bedell was able to study the swings of Western Illinois’ batters with Corral and come up with a plan before the game. He had one of the best outings of his college career, recording a career-high 12 strikeouts while only giving up three hits and two runs.

In his sophomore season, Bedell went 3-1 with a 1.56 ERA in 40⅓ innings pitched. He had 18 appearances and started his first college game in the Tigers’ regular season finale.

Bedell had seven appearances in his freshman season. In 11⅔ innings pitched, he had 13 strikeouts and a 6.17 ERA.

While Bedell has had success his past two seasons, there is one thing he knows he needs to improve on before playing professionally, something he could work on if he chooses to return to Missouri.

“I need to stop overthinking,” Bedell said. “Sometimes I’ll get in my head a little bit too much and I’m trying to be too perfect when in reality, that’s going to make things worse.”

One of his pregame routines helps him with that.

“Before I pitch, I listen to ‘Humble and Kind’ (by Tim McGraw). … It’s just something that can keep my frame of mind not just so locked into baseball,” Bedell said. “There’s lots away from baseball and not just everything is wrapped around it.”

The lyrics seem fitting for a player who has worked as hard as Bedell and with a dream of being drafted so close within reach.

He recognizes consistency and control as his strengths.

“When I go out there, we know exactly what we’re going to get and I’ll be able to keep the team in the ball game,” Bedell said. “Whether it’s not a great performance or it’s a really good one, we’re going to be right there in the game at the end of it. Also being able to control three pitches at any time throughout the zone at any count is really helpful.“

Former Missouri pitcher Max Scherzer is another pitcher who can claim consistency and control as his strengths.

“I’m trying to make sure that I get to my 0-2, 1-2 counts,” Scherzer said in a New York Times article from May 2018. “That’s really how I would rather phrase it: I’m trying to make sure that I can drive the count into my favor. I know when I get to 0-2, 1-2, when I’m ahead in the count, that I hold a distinct advantage over every single hitter. I have so many options because I don’t have to work within the strike zone anymore.”

Getting to watch Scherzer win the World Series with the Washington Nationals this past season emphasized to Bedell his dream to win it himself someday, even after the Nationals beat Bedell’s childhood favorite team, the Cardinals, in Game 2 of the NLCS in St. Louis.

On October 12, Scherzer did not allow a hit until the seventh inning and even then, it was the only one he gave up all night.

“One of my teammates here took me to the game at Busch Stadium when Max was pitching,” Bedell said. “There’s always a little bit of pride getting to watch it.”

Scherzer isn’t the only current major-league pitcher who played for Missouri. The Texas Rangers’ Kyle Gibson also played for MU and was drafted 22nd overall by the Minnesota Twins in 2009.

If Bedell makes it to the major leagues, he’ll certainly be in good company.

Even during the COVID-19 pandemic, the dream and passion that Bedell has had for the game since he was a little boy help keep him motivated to work out.

“It’s still fun. It’s weird sitting around and not doing anything,” Bedell said. “But you still find enjoyment doing things like throwing and working out.”