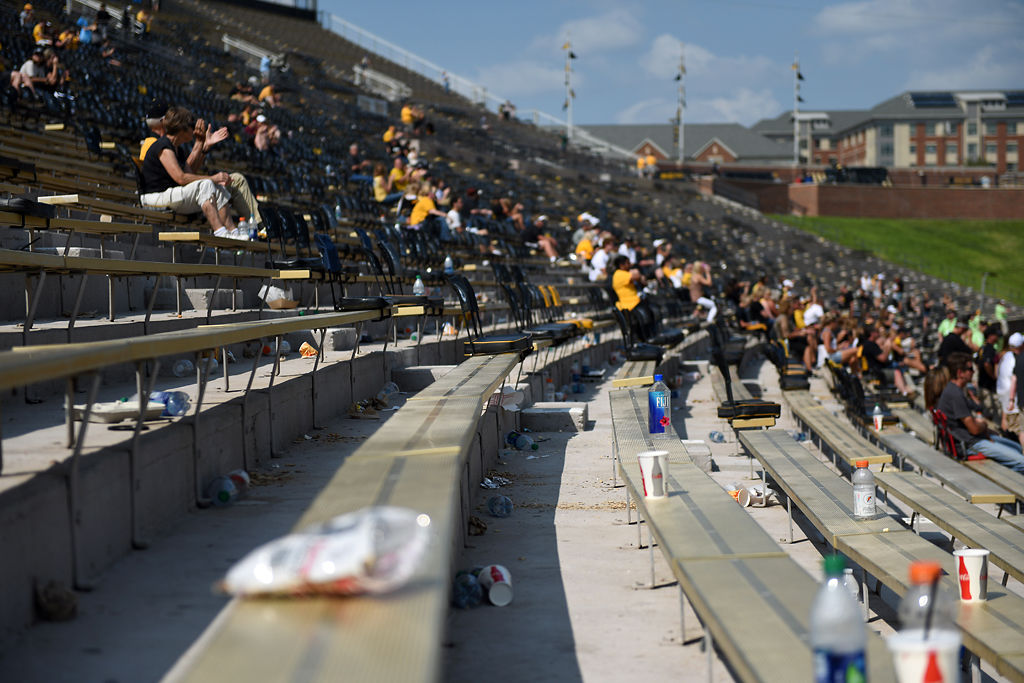 Trash lines the stands of Memorial Stadium after the Tigers faced Missouri State on Sept. 2. This is a common scene after football games. 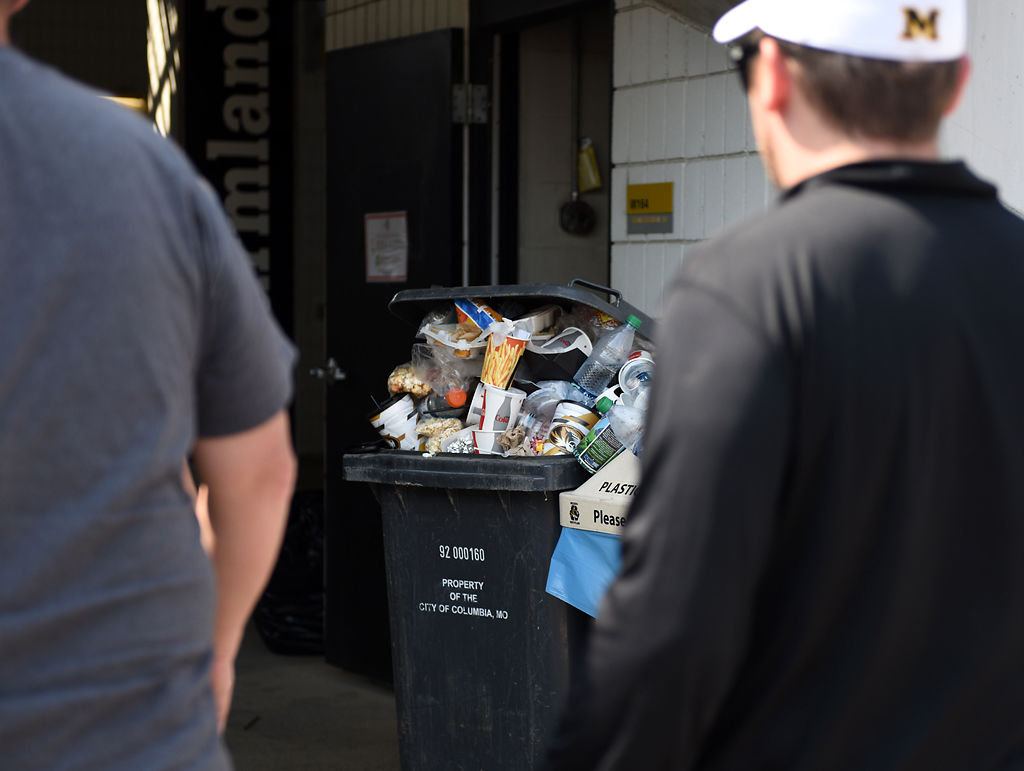 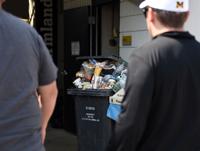 Trash cans are filled to the brim along the hallways of Memorial Stadium after the Tigers faced Missouri State on Sept. 2.

Trash lines the stands of Memorial Stadium after the Tigers faced Missouri State on Sept. 2. This is a common scene after football games.

Trash cans are filled to the brim along the hallways of Memorial Stadium after the Tigers faced Missouri State on Sept. 2.

Hot dogs, nachos, pizza, burgers and beer are as common at a Missouri football game as tailgates and country music.

The typical fan will order one or several of those items at Memorial Stadium on gameday. When they are done with their food or beverage, they will try to find the nearest trash can to throw it in before they return to their seat to continue watching the game. They may also just put the trash behind their feet because they know it will be cleaned up after the game.

What the typical fan might not know is that this is only the beginning of the journey for the piece of trash they just threw out or left. When there is anywhere between 50,000 to 70,000 fans at a given game, the accumulated trash adds up, and the MU has to deal with it.

How much trash is collected at a single game? Where does the trash go? Are there consequences to misplacing trash? How would someone deal with those consequences?

The answers to these typically unasked questions are surprisingly complex. It was questions like these that prompted Engineering and Public Affairs Assistant Professor Ron McGarvey and Bioengineering Assistant Research Professor Christine Costello to conduct a food waste study in 2014.

McGarvey and Costello first audited the food waste generated at campus dining centers in 2013, before switching their focus to Memorial Stadium.

The study they conducted found that from five home football games in 2014, an estimated 47.3 metric tons of waste was generated, 29.6 metric tons of that waste originated outside the stadium (pre-consumer waste), 96 percent of which was unsold food waste. The other 17.7 metric tons was found inside the stadium (post-consumer waste), with recyclable materials making up 43 percent and 24 percent counted as food waste. The majority of the waste left was destined for a landfill.

"For composting you need to have pretty good control so that there isn't any non-food stuff getting in the waste," McGarvey said. "That's hard to do with post-consumer waste because somebody sees a special bin that says food waste might throw out the hot dog still in the foil wrapper and that screws it up."

Tony Wirkus played a key role in helping McGarvey and Costello carry out their study. Wirkus is the director of event management and sustainability director for MU athletics, and was able to get passes for the students helping with the study to get into the games and collect bags, as well as examine trash.

The problem of food waste at Memorial Stadium is not new for Wirkus and the Event Management department at MU. When the West Tower was constructed at the stadium, his team implemented chutes to sort recycling and trash. Similar chutes were added to the east side as well.

Measures like the chutes are part of a program that overhauled the previous sustainability procedure and led to 90,000 pounds of waste being diverted from landfills in its first year. That was a 300 percent spike from the previous year, and put Missouri on its way to reaching the goal of "zero waste."

Zero waste is a goal for many organizations and is an idea rather than a set, scientific standard. The goal is for 90 percent of trash to be diverted from somewhere other than a landfill, whether that be through recycling, composting or any other diversion practice.

Recycled trash gets reused for other materials and composted trash gets decomposed and used for things such as fertilizer. Trash that ends up in a landfill does not move because it cannot decompose and can cause problems such as pollution. The goal of zero waste aims to reuse as much trash as possible.

McGarvey and Costello conduct studies and Wirkus implements new measures at the stadium, each of which aim at achieving the goal of zero waste. However, there is one large barrier that prevents organizations from reaching that goal.

Education techniques are evident throughout MU, including colored trash cans with pictures to make sure students throw the right trash in the right place.

New innovations are being considered at the football stadium after the finalization of the data from McGarvey and Costello's study. The future development of the south end zone presents a new opportunity for waste diversion methods to be established, and Wirkus, along with his team, will consider several options after the current season ends.

Missouri is not the only school that has programs aimed at achieving zero waste at football games.

Ohio State has achieved zero waste several times since steps were taken to achieve that goal in 2012. The school has used methods such as hiring local high school students to help educate fans at games about where to put their trash and partnering with the Southeastern Correctional Complex, where inmates sort through recycling and compost trash.

Those tactics have helped Ohio State, but Wirkus wants to find the approach that is right for Missouri.

"A lot of what my focus has been is something that is viable long term and figuring out how we can work this into our long-term operation," Wirkus said.

While finding a viable long-term plan is the goal, the consumer must make their own strides to help the cause. It can be confusing to understand which trash should go where, and the university has made attempts to educate the consumer.

The Sustainability Office has made marketing material to distribute to the public and will talk with individuals at the football games to educate them about sustainability.

However, like Wirkus says, the consumer must care to make the effort as well. As more studies are done, the consumer's awareness of options at their disposal increases, which should lead to an increase in diversion of waste at football games.