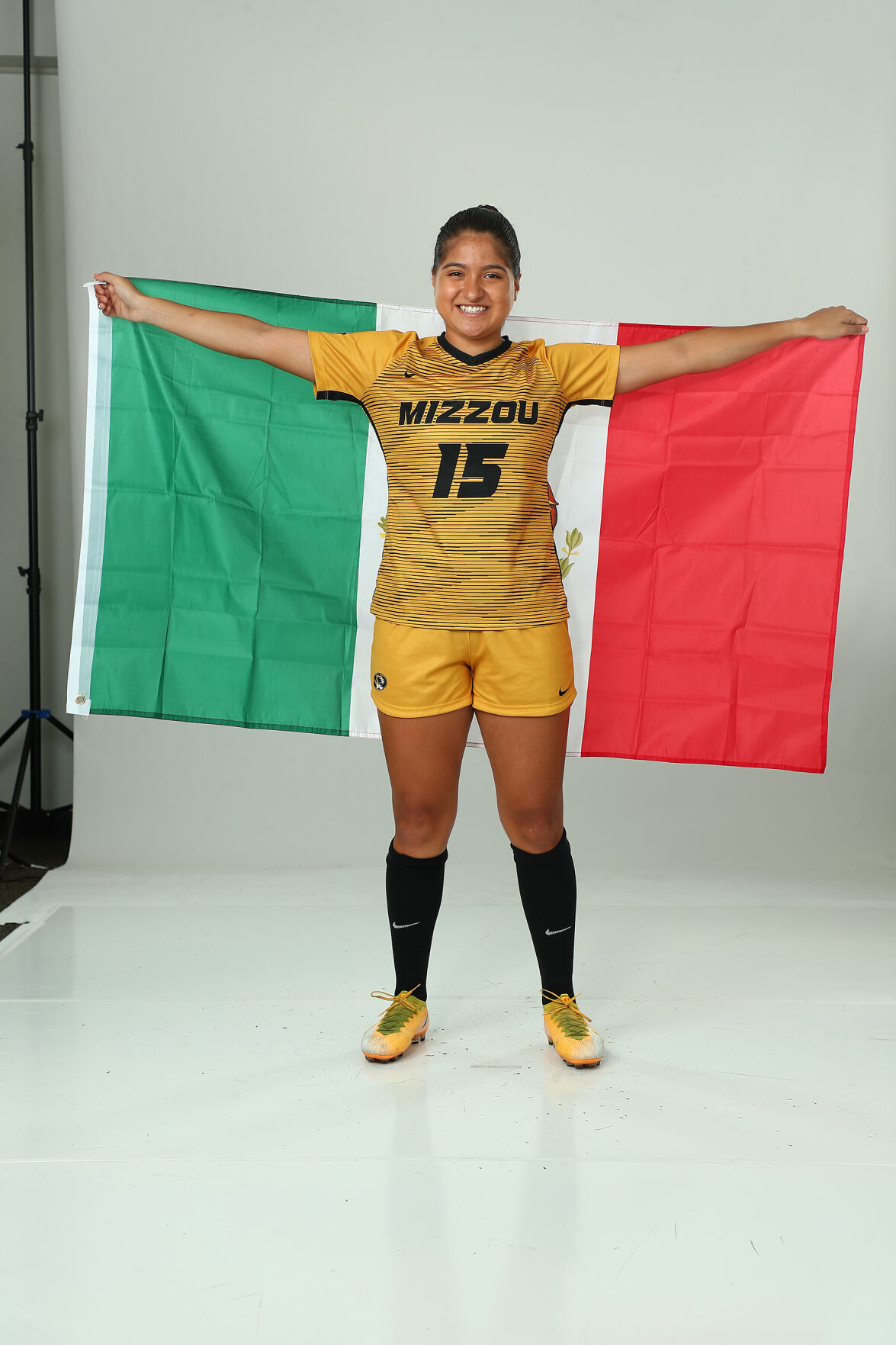 Missouri forward Julissa Cisneros holds up the Mexican flag Aug. 2 in Columbia. The senior from Moreno Valley, Calif., is eligible to represent both the U.S. and Mexico in international competition. 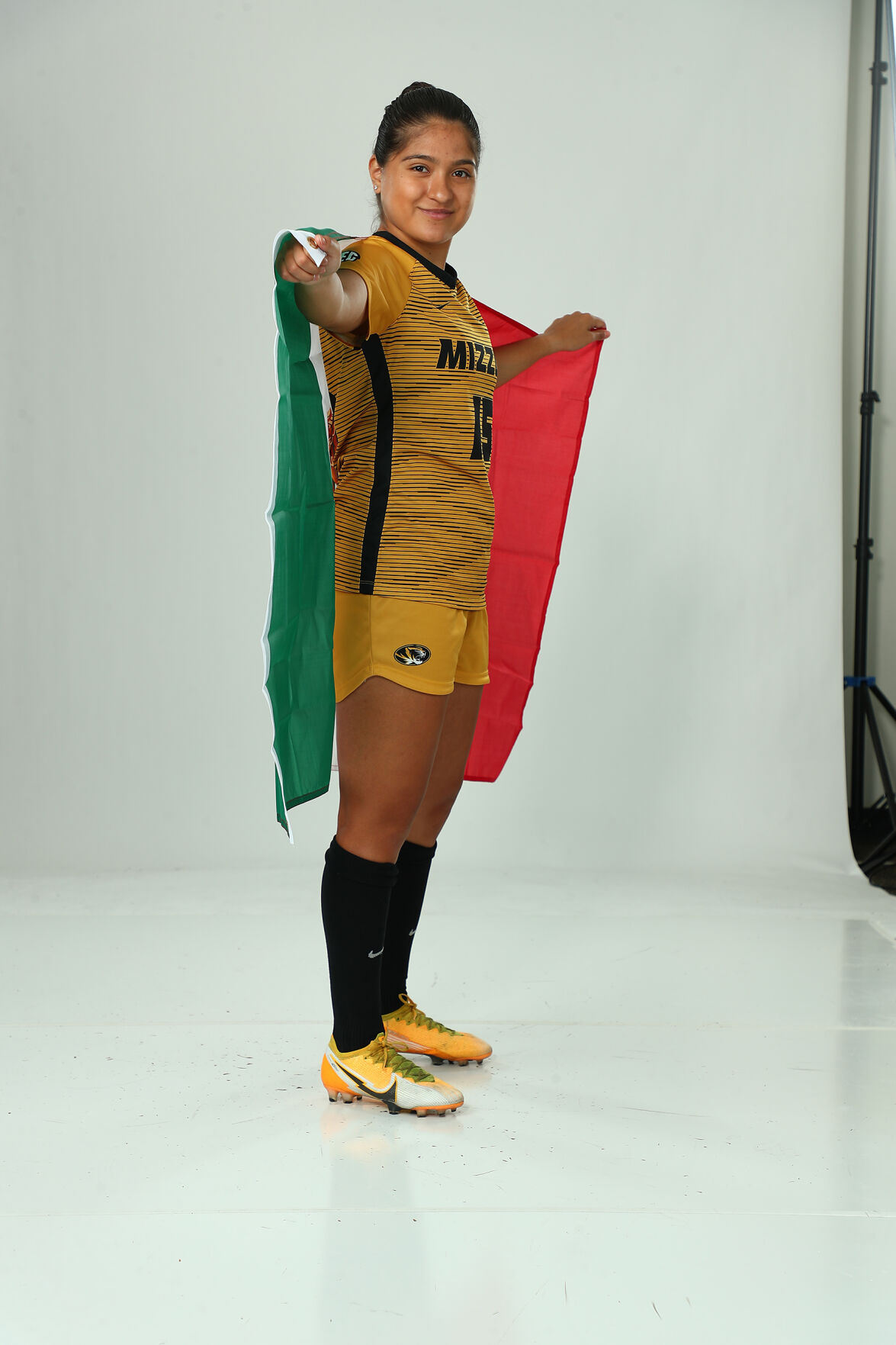 Missouri forward Julissa Cisneros holds up the Mexican flag August 2 in Columbia. Cisneros, like many other players, has been to both U.S. and Mexican national team trainings at the youth levels.

Missouri forward Julissa Cisneros holds up the Mexican flag Aug. 2 in Columbia. The senior from Moreno Valley, Calif., is eligible to represent both the U.S. and Mexico in international competition.

Missouri forward Julissa Cisneros holds up the Mexican flag August 2 in Columbia. Cisneros, like many other players, has been to both U.S. and Mexican national team trainings at the youth levels.

Watching the movie “Selena” when she was a kid, Julissa Cisneros’ father pointed out one scene in particular.

Selena, along with her brother and father, were in an old-style van. Selena, an up-and-coming singer played by Jennifer Lopez, had the chance to sing in Monterrey, Mexico. Her father, portrayed by Edward James Olmos, wasn’t as excited about the possibility.

“Being Mexican-American is tough,” Olmos said, playing the character of Abraham Quintanilla. “We gotta prove to the Mexicans how Mexican we are. We gotta prove to the Americans how American we are. We gotta be more Mexican than the Mexicans and more American than the Americans, both at the same time — it’s exhausting. Nobody knows how tough it is to be a Mexican-American.”

At that age, Cisneros didn’t understand why her father was pointing out that scene to her.

“I didn’t relate to it at that time,” Cisneros said. “I was young, for one, I didn’t see the world that way. I was from Southern California, where the majority were Mexican, so I never really felt that too much until I got older.”

Cisneros, a senior forward on Missouri’s soccer team, is in a position that countless other young Mexican-American players find themselves in — being a dual national and having the eligibility to represent both the U.S. and Mexico in international competition. And like the scene in Selena, the crossroads of that identity can be difficult to deal with, leading many to feel as though they are caught between two cultures.

“(When I got older) I did kind of feel this stuck in between,” Cisneros said. “But I think when it comes to it, my Mexican roots always come out stronger because that’s kind of how I was raised.”

The race for dual nationals is nothing new. Just in recent months, both the U.S. and Mexico landed significant commitments from players with dual-eligibility — Ricardo Pepi for the Americans, David Ochoa and Julian Araujo for El Tri. Those players, like Cisneros, all explained the feeling of being stuck between two cultures.

In an article for the Players’ Tribune, Ochoa wrote, “No matter how much I try, I will never be fully American. Nor will I ever be fully Mexican,” while Araujo also told The Athletic that he has also felt stuck between two cultures at times. This is a sentiment that has been echoed by players on the faultline for years.

“It is a hard decision,” Cisneros said. … “As long as people are making proper decisions with intent and they’re thinking about it, I don’t think that it can go wrong in their world.”

However, there is the issue of soccer not being accessible to everyone in the same way. For many people, around the world, the beautiful game was a poor person’s sport stolen by the rich. This is perhaps truest in the U.S., where a pay-to-play system largely limits who can play for high-level teams throughout the country.

This leads to fewer opportunities for players who are economically disadvantaged, oftentimes being of ethnic minority descent.

A 2014 study from Utah State University found that, on average, American families spent nearly $2,300 on youth sports. That figure could rise to more than $20,000 with travel costs, personal trainers and other extraneous expenses, according to the New York Times.

U.S. soccer has also been accused in the past of not doing enough to reach out to Latin-American communities and neglecting the community as a whole. This criticism hit a high point after the American men’s team failed to qualify for the 2018 FIFA World Cup and Jonathan González chose to represent Mexico over the U.S. Thomas Rongen, the former chief scout for U.S. soccer, claimed to have visited González three times, but this claim was denied by the player’s family.

“There has to be effort on both sides,” Cisneros said. “You have to show interest into a player for them to really consider, like, ‘Is this an option?’”

The issue of not having Mexican-American representation goes beyond the men’s game and is very prevalent in women’s soccer, as well.

While the chase for dual nationals hasn’t been as intense on the women’s side as it has been on the men’s, it is starting to gain traction with the addition of Brazilian-American Catarina Macario and the pursuit of Spanish-American dual national Damaris Egurrola. Despite these more recent developments, there wasn’t a single player of Mexican-American or Hispanic-American descent on the U.S. women’s roster for the 2019 World Cup. That is despite the fact that Hispanic-Americans make up 18.5% of the population, according to 2019 Census data.

“It could be a little disheartening sometimes,” Cisneros said. ... “It’s good to have that representation to see yourself. … It sounds like it should be more diverse on the team.”

Sometimes, players feel pressured by their family to choose one team over the other, but not Cisneros. While she was brought up to support Mexico, her mother has a video of her scoring in one of the U.S. camp matches she participated in. Her uncles came to see her, and want to see her when she’s with the Mexican team but can’t because those camps are enclosed.

She did mention that they occasionally joke about the subject. She mentioned her mother saying she is fine with what she chooses, “but if you represent Mexico, mija,” to which she followed with a slight laugh.