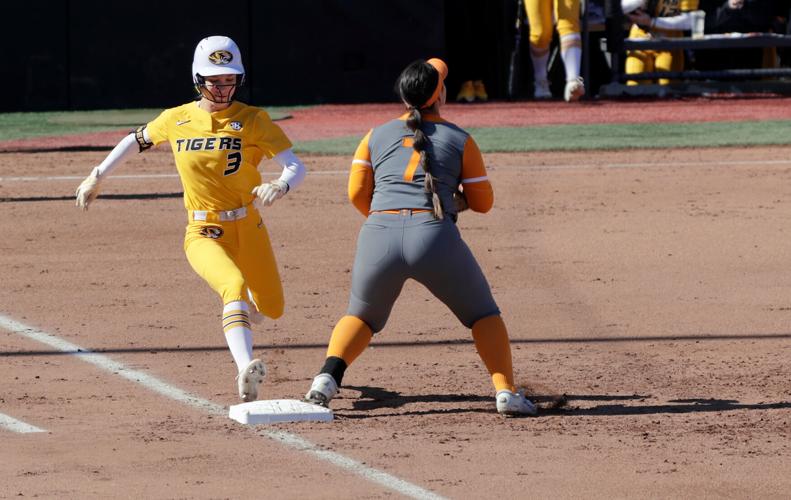 Jenna Laird reaches first base safely Sunday at the Mizzou Softball Stadium in Columbia. Laird is batting .338 on the season thus far. 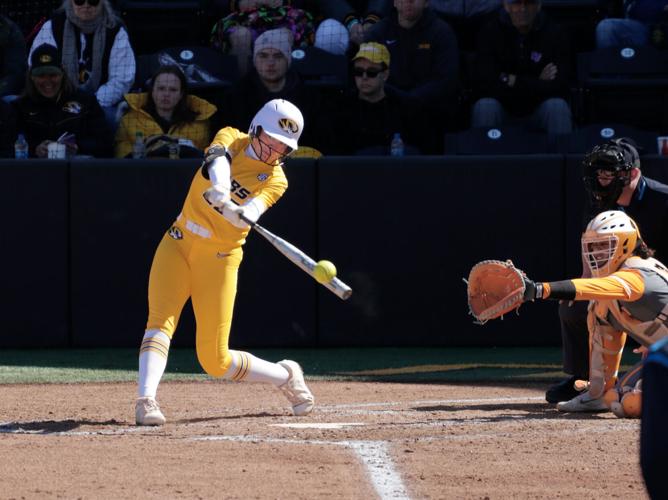 Alex Honnold gets a hit in Missouri’s game against Tennessee on Sunday at the Mizzou Softball Stadium in Columbia. Honnold went 2-3 in her at-bats in Missouri’s 5-4 loss. 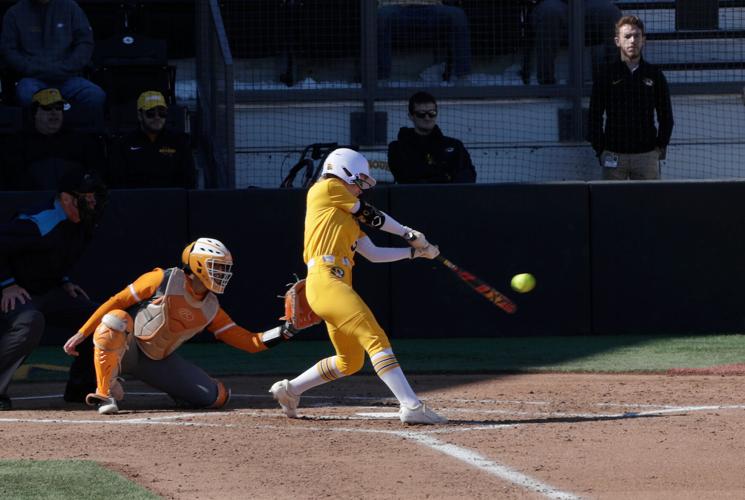 Jenna Laird gets a hit in Missouri’s game against Tennessee on Sunday at Mizzou Softball Stadium in Columbia. Laird went 2-for-3 in her at-bats in Missouri’s 14-3 loss. 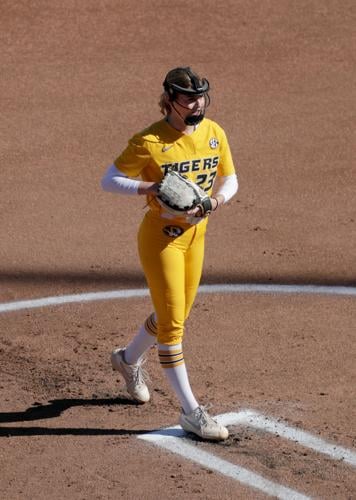 Jordan Weber warms up before pitching against Tennessee on Sunday at the Mizzou Softball Stadium in Columbia. Weber gave up four hits in Missouri’s 14-3 loss. 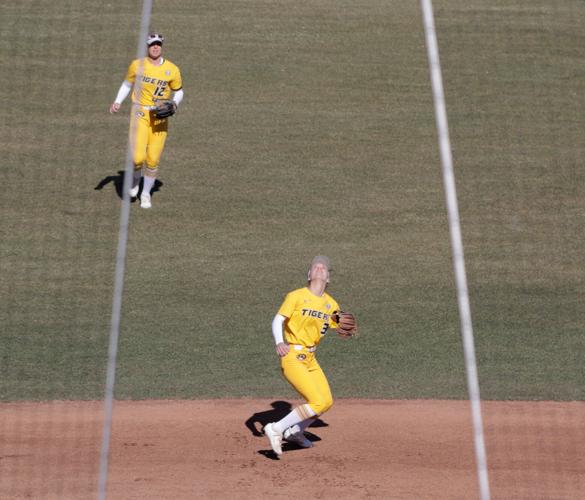 Jenna Laird reaches first base safely Sunday at the Mizzou Softball Stadium in Columbia. Laird is batting .338 on the season thus far.

Alex Honnold gets a hit in Missouri’s game against Tennessee on Sunday at the Mizzou Softball Stadium in Columbia. Honnold went 2-3 in her at-bats in Missouri’s 5-4 loss.

Jenna Laird gets a hit in Missouri’s game against Tennessee on Sunday at Mizzou Softball Stadium in Columbia. Laird went 2-for-3 in her at-bats in Missouri’s 14-3 loss.

Jordan Weber warms up before pitching against Tennessee on Sunday at the Mizzou Softball Stadium in Columbia. Weber gave up four hits in Missouri’s 14-3 loss.

With the snow that forced a reworking of the series schedule still occupying the top of the dugouts, No. 14 Missouri lost both games of Sunday’s doubleheader against No. 18 Tennessee. The Tigers suffered a 14-3 run-rule loss in six innings in the first game before losing 5-4 in the second game.

The series started two days after it was originally scheduled and Tennessee swiftly made up for lost time. In the first game, the Volunteers sprung for four runs — all with two outs — in the top of the first inning. Amanda Ayala doubled for the game’s first hit before Ashley Morgan switched places with her two batters later on an RBI double. After a hit batter, Zaida Puni delivered the big swing, a three-run homer over the left field wall that gave Tennessee (18-6, 2-0 SEC) the start it had waited all weekend for.

Missouri starter Jordan Weber never got to face the entire Volunteers lineup. After the first two batters reached following Puni’s home run, Anderson turned to Megan Schumacher out of the bullpen. Schumacher ended the frame on the first batter she faced.

The Volunteers struck again in the third inning. Trouble brewed for Missouri (16-6, 0-2) from the onset when the first three batters reached to load the bases with no outs. A strikeout gave the Tigers brief hope, but Tennessee wouldn’t squander the opportunity to break the game open. Lair Beautae cracked a ground ball down the third base line that stayed just fair to drive in two runs and make it 6-0 Volunteers.

After being held scoreless for three innings, Missouri’s bats came alive in the fourth. Kara Daly redirected the first pitch she saw over the right field wall for a leadoff home run. After going deep in all four games the previous weekend, Daly’s home run in the first game Sunday marked her fifth in five career games at Mizzou Softball Stadium.

With two outs, Hatti Moore’s infield pop-up into the cloudless sky careened in and out of Beautae’s glove at second base. The only error of the game proved costly as Riley Frizell hit a two-run homer the next at-bat to cut Tennessee’s advantage to 6-3.

The Volunteers erased Missouri’s progress promptly and decisively. Tennessee added three runs in the top of the fifth on Kiki Milloy’s inside-the-park home run. In the sixth, the Volunteers supplemented their lead with five more runs, two of which came on a Milloy single up the middle, giving the junior five RBI in the game.

After failing to cobble together the necessary runs in the bottom of the sixth, Missouri was run-ruled in its SEC opener.

The Tigers came closer but were unable to capture their first SEC win of the season in the second game.

Missouri created its own misfortune in the first inning as Tennessee scored its first run without getting a hit. Ayala walked and stole second before advancing to third on a fielding error by Missouri starter Laurin Krings. Ayala came around to score when Frizell dropped a towering infield pop-up the next at-bat.

If some element of luck played into the Volunteers’ first run, they made sure there was no doubt who was responsible for their next set of scores.

Tennessee homered in each of the next three innings. Madison Webber hit a two-run shot in the second and Puni and Ivy Davis hit solo four-baggers in the third and fourth, respectively.

Puni combined to go 4 of 6 with two home runs and a walk across Sunday’s two games.

Again, Missouri’s lineup broke out in the fourth inning. Trailing 5-0, the Tigers strung together five hits to plate three runs in the fourth. With runners on first and second, Alex Honnold doubled to score Missouri’s first run. Kendyll Bailey stepped into the box next and singled in another run.

A pitching change did not stop the Tigers as Moore delivered an RBI single to make it 5-3.

Missouri built upon its newfound momentum as Krings recorded her first scoreless inning of the game in the top of the fifth. In the bottom of the fifth, Wert brought the Tigers within one run with a sacrifice fly that scored Brooke Wilmes.

Wert’s RBI was the last of the game; both teams’ bats went silent in the final two innings. Edmoundson again had something to do with keeping Missouri off the board. The lefty entered the circle in the fifth and allowed one of two inherited runners to score but blanked Missouri the rest of the way.

“(Edmoundson) has a very unorthodox delivery, especially coming from the left-hand side,” Anderson said. … “We were guessing. We weren’t really staying to our approach.”

Missouri showed life in the bottom of the seventh. Wert singled to left with two outs before Daly walked on four pitches, putting the tying run on second base, but it was all for naught. Honnold hit a pop-up into shallow left field, but Davis ranged back at shortstop to make the catch and end the game.

What: Missouri vs. Illinois