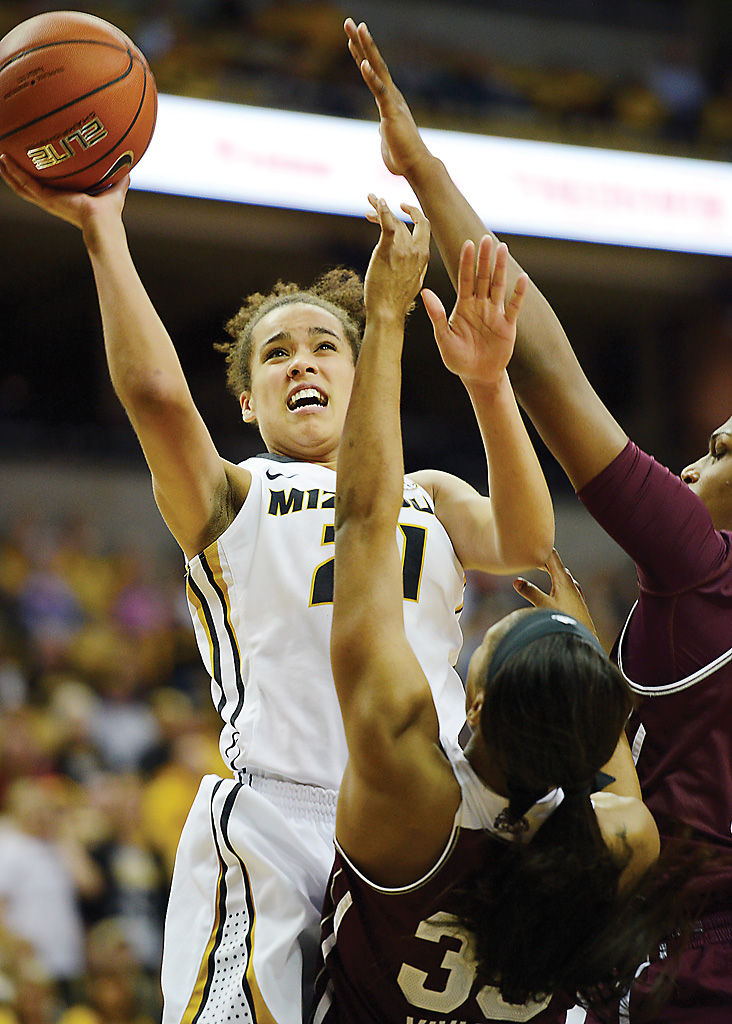 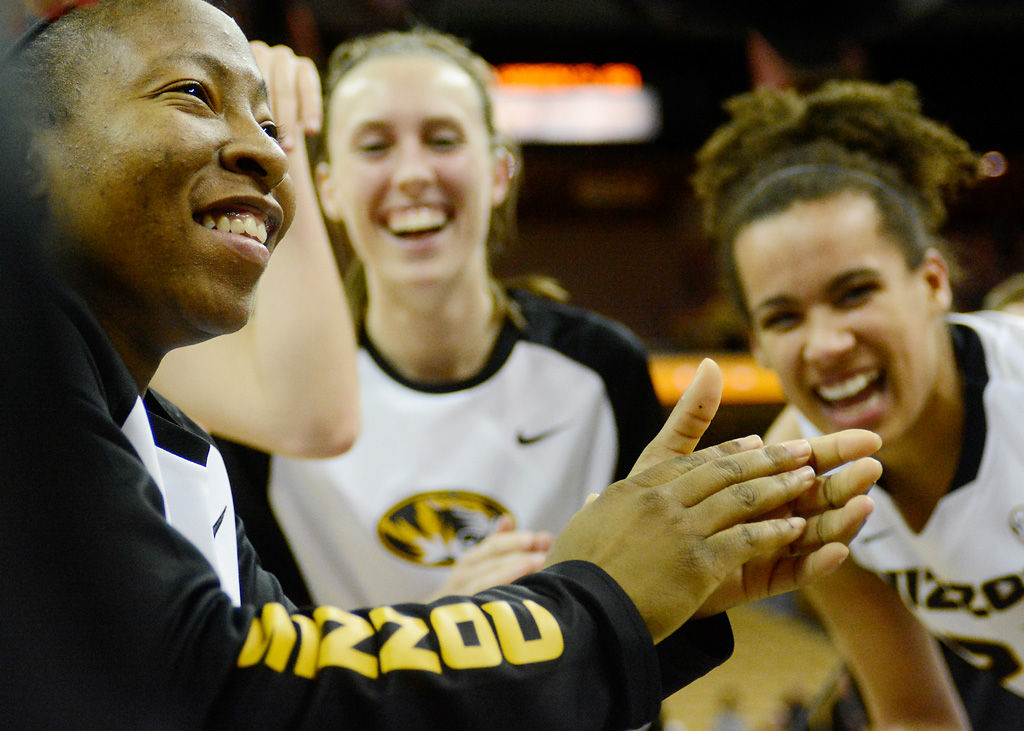 From left, Missouri players Carrie Shephard, Morgan Stock and Cierra Porter celebrate their 66-54 win over the Mississippi State Bulldogs on Thursday at Mizzou Arena. The Tigers' overall record is 15-2, and their SEC record is 2-2. 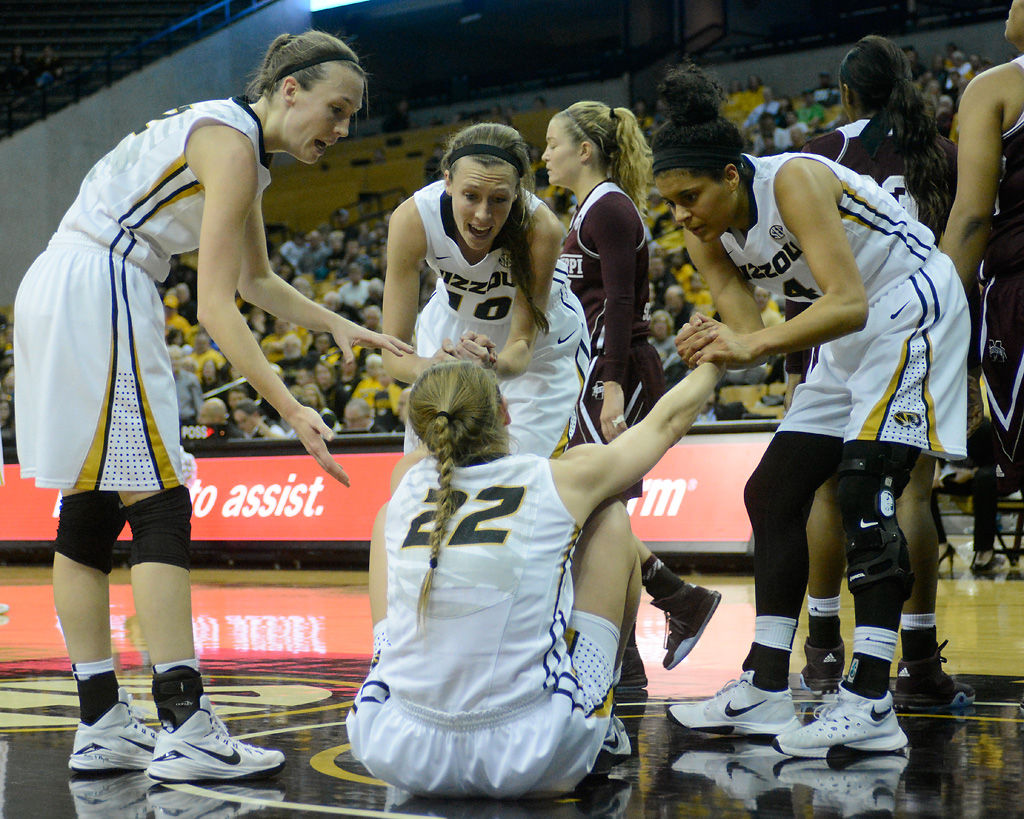 Missouri forward Jordan Frericks is helped up by her teammates, from left, Morgan Stock, Maddie Stock and Bri Porter during Thursday's game against the Mississippi State Bulldogs at Mizzou Arena. Frericks chipped in 10 points for the Tigers.

From left, Missouri players Carrie Shephard, Morgan Stock and Cierra Porter celebrate their 66-54 win over the Mississippi State Bulldogs on Thursday at Mizzou Arena. The Tigers' overall record is 15-2, and their SEC record is 2-2.

Missouri forward Jordan Frericks is helped up by her teammates, from left, Morgan Stock, Maddie Stock and Bri Porter during Thursday's game against the Mississippi State Bulldogs at Mizzou Arena. Frericks chipped in 10 points for the Tigers.

But that's what she and the No. 24 Tigers received Thursday after the first 10 minutes en route to stunning No. 7 Mississippi State 66-54 at Mizzou Arena. Missouri moved to 15-2 on the season and 2-2 in conference play.

In what Bulldogs coach Vic Schaefer called, "a good old-fashioned, getting-taken-to-the-woods-woodshed whooping," the Tigers jumped out to a 12-point lead after the first quarter. Mississippi State would never get within seven points again.

Pingeton emphasized those losses as the motivation to prepare even more intensely for Mississippi State. She said Missouri likely would not have been able to beat the Bulldogs had it not started the Southeastern Conference schedule with such disappointment.

"We wanted to go out and be the aggressors," Pingeton said.

On offense, they certainly were. Freshman Sophie Cunningham, who was held to single-digit scoring in Missouri's first three SEC games, scored a game-high 22 points. Frericks followed with 10 points and 10 rebounds, her 21st career double-double.

Cunningham's performance, Schaefer said with a wry grin, was "not part of the plan."

On the other end of the floor, Missouri's tenacious defense made Mississippi State suffer multiple scoring droughts lasting longer than two minutes. The Bulldogs shot a season-low 27.6 percent from the field.

Although Pingeton called the game one of Missouri's best defensive efforts of the season, the Bulldogs still outplayed the Tigers on the glass, once grabbing six offensive rebounds in a single possession. Missouri more than made up for it by draining 25 of 50 from the field.

The game was incredibly physical with 43 total fouls. In the early minutes of the second quarter, Frericks left the game after hitting her chin on the floor, drawing blood. She returned to the court midway through the quarter and scored two possessions later as part of a 10-0 Missouri run. The Tigers went up 20 points and ultimately headed into the locker room with a 36-25 lead. That drew another standing ovation.

Spencer Bexten, a student at Lincoln University in Jefferson City, was sitting in the student section decked out in a white Missouri T-shirt and gray Missouri hat, stomping his feet and fervently yelling for foul calls. Bexten, 20, has attended Missouri sporting events his entire life but was never inspired to purchase season tickets until seeing the play of this season's women's basketball team.

"I've never seen a team this intense," he said. "You can tell by seeing everyone in the crowd, too."

The 3,461 fans in attendance were on their feet nearly the entire game, a testament to the team's growing fan base. Bexten had to be at work at UPS in Morgan, Missouri, at 4 a.m. Friday morning but chose to stay at Mizzou Arena until the final buzzer.

The Tigers slowed down in the second half, but barely. Mississippi State opened the third quarter on a 6-3 run to close the gap to nine points, but at the third quarter media timeout, Pingeton told her team one thing: "Not tonight."

Cunningham struck on back-to-back possessions — part of an 18-point second half — to keep the Bulldogs at bay and reopen a double-digit lead. Before they knew it, the Tigers were 10 minutes away from an upset.

With Missouri up by 10, the crowd began counting down the final 10 seconds on the shot clock, and Cierra Porter drained a sideline jumper.

"One minute remaining," the announcer blared.

The victory over Mississippi State was Missouri's best win over a ranked opponent since beating No. 4 Baylor on Jan. 4, 2006.

It was a crucial win for the Tigers, who went undefeated in nonconference play but needed to prove themselves in the top women's basketball conference.

In the end, Schaefer summed it up best: "Tonight's about Missouri."

'Out of my body': Osaka sharp in debut at Tokyo Olympics

DeChambeau, Rahm out of Olympics after positive COVID tests