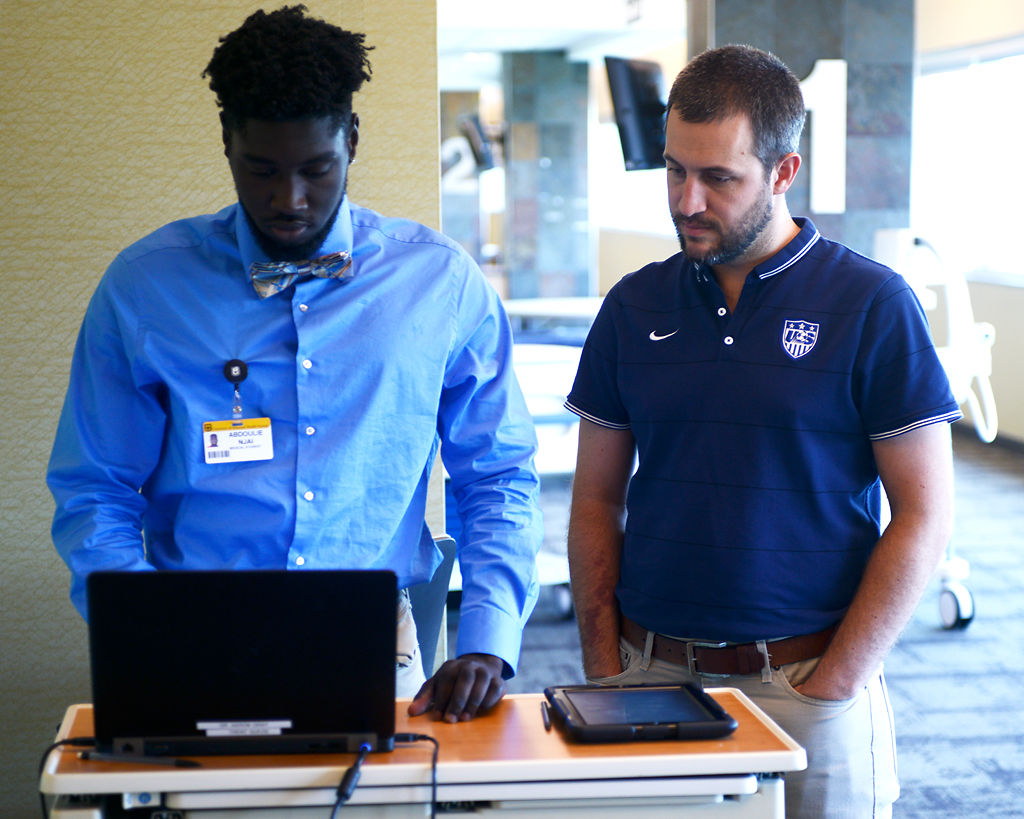 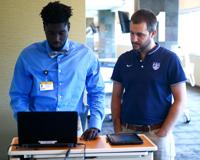 Medical student Abdoulie Njai, left, and Dr. Aaron Gray look at joint analysis results on July 2 at the Missouri Orthopaedic Institute. Gray specializes in sports medicine and non-operative treatment of musculoskeletal injuries. Gray hopes the machine can be used to directly locate where the pain from an injury is coming from based off data rather than just feedback from the patient. 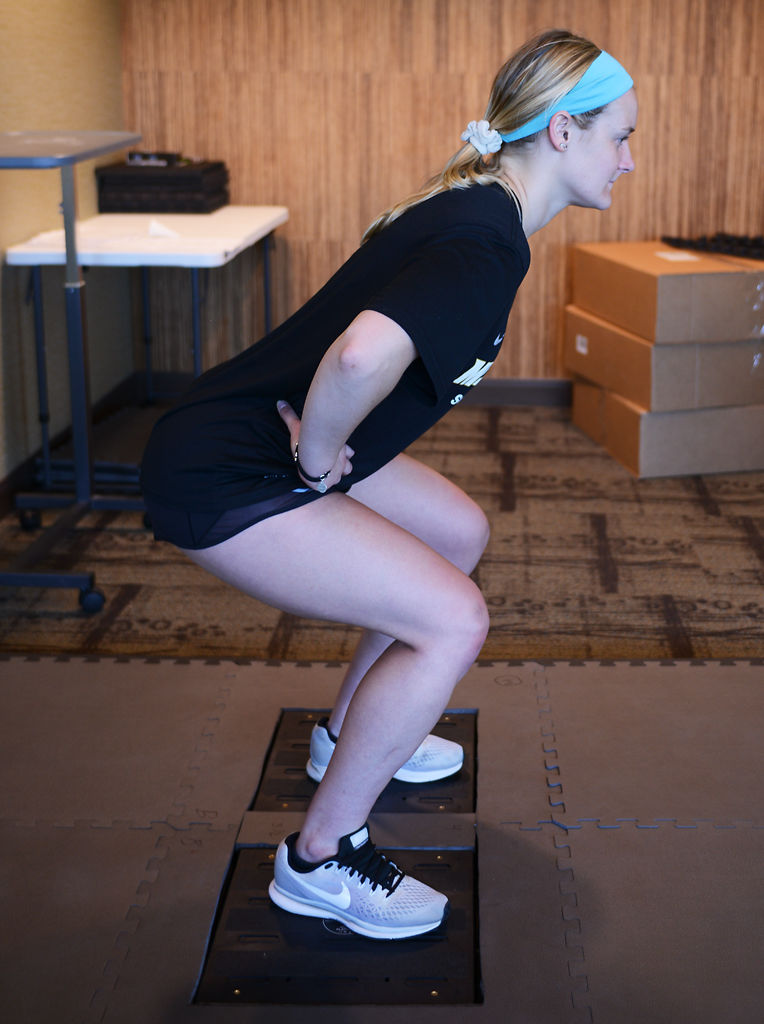 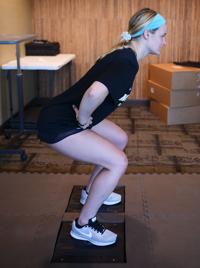 Missouri soccer defender Izzy Coulter demonstrates how a Microsoft Kinect V2 works with a weight distribution machine to understand the wear and tear on joints like the hips, knees and ankles on July 2 at the Missouri Orthopaedic Institute. Dr. Aaron Gray is testing whether the machine can be used for clinical purposes, as the machine is currently being used for athletic purposes.

Medical student Abdoulie Njai, left, and Dr. Aaron Gray look at joint analysis results on July 2 at the Missouri Orthopaedic Institute. Gray specializes in sports medicine and non-operative treatment of musculoskeletal injuries. Gray hopes the machine can be used to directly locate where the pain from an injury is coming from based off data rather than just feedback from the patient.

Missouri soccer defender Izzy Coulter demonstrates how a Microsoft Kinect V2 works with a weight distribution machine to understand the wear and tear on joints like the hips, knees and ankles on July 2 at the Missouri Orthopaedic Institute. Dr. Aaron Gray is testing whether the machine can be used for clinical purposes, as the machine is currently being used for athletic purposes.

A torn anterior cruciate ligament. It’s a diagnosis no athlete, coach or fan ever wants to hear. The injury can rob an athlete of essential agility and lead to even more injuries because of the additional stress the tear places on other knee structures, like the shock absorbers of the meniscus or the smooth lining of knee cartilage.

“It (the ACL) basically acts like a rudder in the middle of your knee, particularly when athletes are cutting and pivoting,” said Dr. Seth Sherman, an orthopedic surgeon for the Missouri Orthopaedic Institute at MU Health Care.“Without the ACL, when you change directions your knee basically buckles and gives way.”

Sherman says the ACL is “kind of a protector of All Things Knee.” Despite the importance of the ligament, deep-seated misconceptions remain, especially relating to an athlete’s return from an ACL tear. Sherman said people commonly have misunderstandings about the length of time it takes to recover from an ACL tear, the likelihood of successfully returning to playing sports and the prospects of returning to the same level of pre-ACL-tear activity.

“When we stick with the first concept (return from injury), the data is very clear, particularly at the higher levels of elite athletics, that it is nowhere near 95-100% return,” Sherman said. “It’s probably in the 60-70% (range), and our published review paper and the series out there. That said, there’s a difference between ‘I can return’ and then, ‘I’m as good or better as I was.’ And those numbers are even lower.”

Sherman said the initial stages of rehabbing an ACL injury are fairly standardized among athletes. The rehab becomes more individualized once the athlete advances to the mid-range of rehab, when he or she is advancing from walking, jogging and agility exercises to jumping, plyometric and sports-specific exercises. During the rehab process, a battery of tests are used, including Biodex machines that examine quadricep to quadricep and hamstring to hamstring ratios of the front muscles to the back muscles. The Microsoft Kinect is also used, its portability being a major asset.

Dr. Aaron Gray, a physician on the integrated health care team in the Missouri Athletic Department, a sports medicine physician at MU Health Care's Orthopaedic Institute and a former team physician for the MU baseball and volleyball teams, first had the idea to use the Kinect for screening about eight years ago, when he was doing his sports fellowship medicine training at UCLA. He bought an XBOX 360 with the original Kinect and realized how well it was tracking his body.

“The thought was, ‘Huh. I wonder if we could develop software that could use this technology on the cheap,’” Gray said.

Gray began working with a professor in the computer science and computer engineering department, Marjorie Skubic, on developing software to use the Kinect to analyze patients’ movements at MU Health Care. Eventually, they added a physical therapist, sports orthopedic surgeon, biomechanical engineer and a strength and conditioning coach to their team, birthing the Missouri Functional Assessment Screening Team, or MFAST.

The entire set-up with the Kinect system is the Kinect itself, a tripod and a computer. The Kinect is used for one specific test. A patient stands on a one-foot tall box, drops off, then jumps as high as he or she can. Using the Kinect, Gray measures the knee and ankle distance.

“What’s really cool about our software for the Kinect is that it does a freeze-frame picture that shows the time when the knees are closest together,” Gray said. “That’s great to bring the athlete around and show the athlete what they look like.”

Seeing the results in real time is beneficial because it allows Gray to point out bad movements and attempt to correct them.

Gray has compared the Kinect to expensive, lab-based motion analysis systems and said he found “excellent correlation” during landing and jumping.

”The advantage of using Kinect is that it is inexpensive, portable, doesn’t require markers to be applied, and therefore, very efficient,” Gray wrote in an email. “We use it as part of a comprehensive return-to-sport testing after athletes have an ACL surgery.”

A third version of the MFAST’s Kinect is being released in the coming months, and with it, Gray hopes to develop more moving tests. One of the drawbacks with the current Kinect is that it’s only effective measuring different things when it faces a patient from the front.

Recently, Gray and MFAST have begun using force plates, which have pressure sensors in them. Gray compares them to a Wii balance board, but the plates usually cost $10,000 or more. However, Gray discovered force plates marketed toward high school science experiments that are $250 or $350 a plate. He then validated the plates by placing them on top of the expensive force plates and, sure enough, the cheaper plates worked well.

“With everything we try to do, it’s bringing expensive technology to the lab and finding the inexpensive alternatives that we can use in clinic or take to the sidelines of a team,” Gray said.

The force plates measure if people are favoring their weight on a certain side, a risk factor for injuring or re-injuring an ACL.

Gray said the team is currently working on combining the force plates with the Kinect, to receive more information in a multitude of ways.