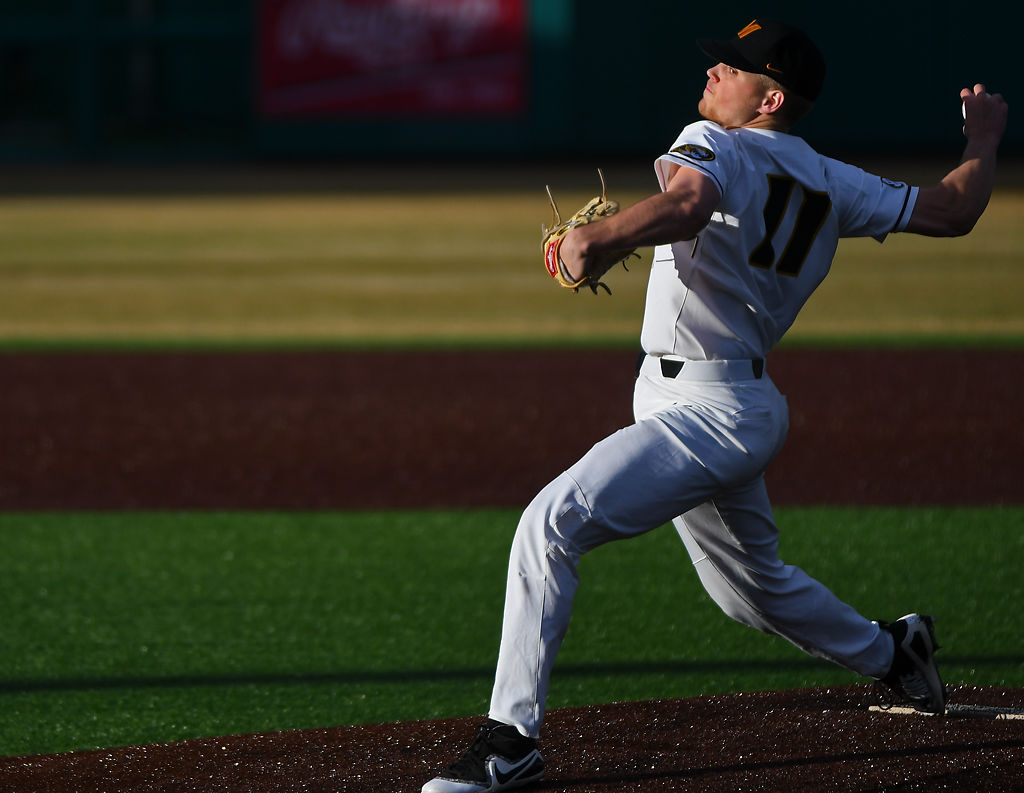 Missouri pitcher Konnor Ash winds up to throw a pitch during a March 13 game against Arkansas State at Taylor Stadium. Ash will be a key contributor this season to a pitching staff that lost TJ Sikkema and Cameron Dulle to the MLB Draft. 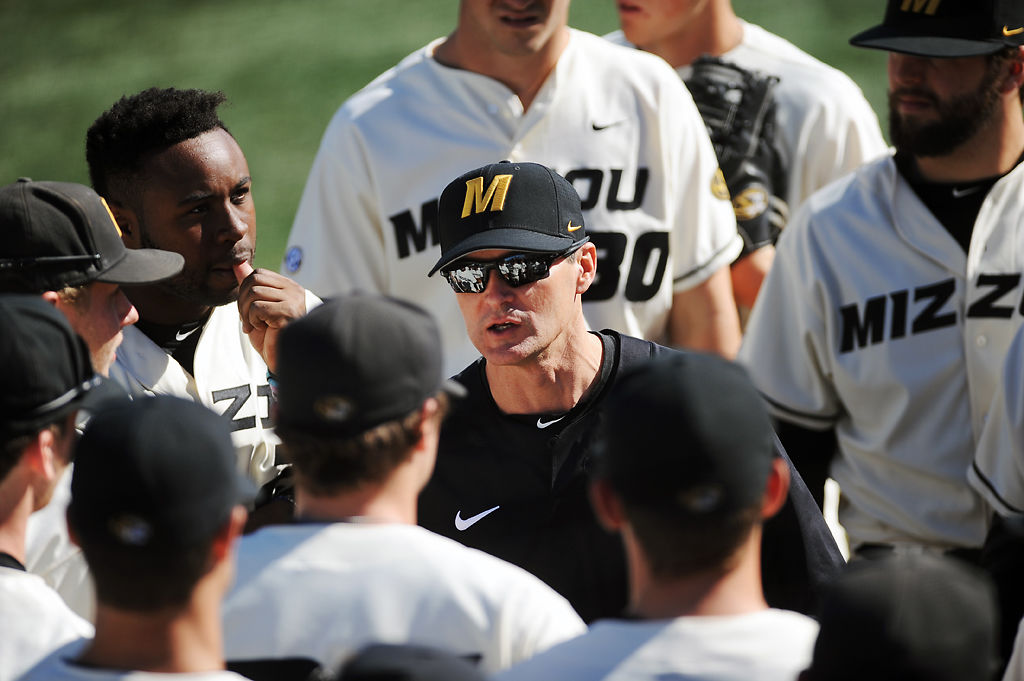 Missouri head coach Steve Bieser talks to the team after a March 4, 2017, game at Taylor Stadium. Bieser and the Tigers are ineligible for postseason play this season due to NCAA sanctions but are shooting for a strong finish in SEC regular season play.

Missouri pitcher Konnor Ash winds up to throw a pitch during a March 13 game against Arkansas State at Taylor Stadium. Ash will be a key contributor this season to a pitching staff that lost TJ Sikkema and Cameron Dulle to the MLB Draft.

Missouri head coach Steve Bieser talks to the team after a March 4, 2017, game at Taylor Stadium. Bieser and the Tigers are ineligible for postseason play this season due to NCAA sanctions but are shooting for a strong finish in SEC regular season play.

Last season, the Missouri baseball team lost in the first round of the Southeastern Conference Tournament and then wasn’t given a chance to play in the NCAA Tournament despite a record similar to some SEC teams that did get NCAA bids.

The Tigers, then, had a lot they wanted to prove this season, starting with showing they deserve a shot at the College World Series this time around. But in November, the NCAA denied the university’s appeal of sanctions against the baseball, softball and football teams for academic misconduct that included a ban from postseason play in the 2020 season.

“It’s tough because we really felt like we’ve got an NCAA team this year and this would be the breakthrough year that we would be selected, because we felt like we’re a pretty good product on the field and we’re going to go out and play well and earn our way into postseason play,” head coach Steve Bieser said. “But since it’s not there, it’s a bitter feeling knowing that you don’t even have that opportunity.”

“There’s everything to play for, really. We’ve said from the beginning that this is out of our control and there’s nothing we can do,” right-handed pitcher Konnor Ash said. “Just going out there and winning every single game that we can, going out there every day with the same mindset and then going out there and competing for that regular season SEC title.”

“Our postseason is the SEC. So, we’re going to go out and do some damage in the SEC,” Bieser said.

The Missouri softball team is also banned from postseason play this year. What did it do in its opening weekend? It went 5-0.

Is the baseball team looking to come out with that same firepower?

“They went out to prove something and that’s the same thing for us. We’re going to go out there and win every single game. That’s the plan, and that’s always been the plan,” Ash said.

The Tigers lost seniors from last season and players to the MLB Draft. They have a few injuries to start off the season. And there are 18 new faces on the team this year.

The Tigers are without former shortstop Chris Cornelius this season. He was drafted by the Philadelphia Phillies over the summer after his junior year. Austin James is the probable replacement at SS this season, according to a release from Missouri Athletics.

One of the team’s new faces, Brandt Belk, is a redshirt junior who spent the past three seasons at Pepperdine. He’s expected to start at first base in the team’s opening series against Jacksonville State this weekend.

“I say he’s a professional hitter. He has an approach. He understands the game, he knows the situations and he is basically trying to execute to make the team better on that particular at-bat,” Bieser said. “He’s really good at that. His dad was a big-leaguer, so he understands the game. He’s going to be a force in our lineup.”

According to the release, the probable infield starters for the opening series are: 1B Brandt Belk, 2B Mark Vierling, SS Austin James and 3B Luke Mann.

The Tigers lost Kameron Misner to the Miami Marlins, who drafted him with the 35th overall pick over the summer.

As for new faces in the outfield, Bieser is excited to see one person in particular.

“Seth (Halvorsen) is a new face, and Seth is going to get an opportunity with the tools that Seth has with the power and the speed combo,” Bieser said.

The team hasn’t officially announced the batting order for its first game yet, but Bieser has a good idea.

“It’s likely that a guy like Mark Vierling is probably going to lead off for us. To see him in that spot and then to have enough behind him to make the lineup deep enough is pretty exciting,” Bieser said.

“You’re going to see some power at the bottom of the lineup with these guys such as AJ James and Seth Halvorsen,” Bieser said. The probable designated hitter for the opening series is Zimmermann.

Star pitcher TJ Sikkema (the 38th overall pick by the Yankees) has moved on, as has Cameron Dulle, who was drafted by the Cardinals (30th round) after last season.

Additionally, the Tigers will be without lefty Trae Robertson for at least part of the season. He had a rib removed.

“Thinking about that, you wouldn’t think he’s going to be available at all this year, but the doctor said he’ll be back to you soon, and he is,” Bieser said. “He is throwing the ball and looking good and now doesn’t have the discomfort he’s had ever since he’s been throwing a baseball. He’s always had that type of discomfort.”

The starters for opening weekend games will be Ian Bedell, Ash and Art Joven, respectively, according to the team release.

Chad McDaniel is listed as the probable catcher.

The Tigers will play the first of a three-game series against Jacksonville State at 3 p.m. Friday in Jacksonville, Alabama. The game will be broadcast on KTGR and can be streamed online via ESPN+.