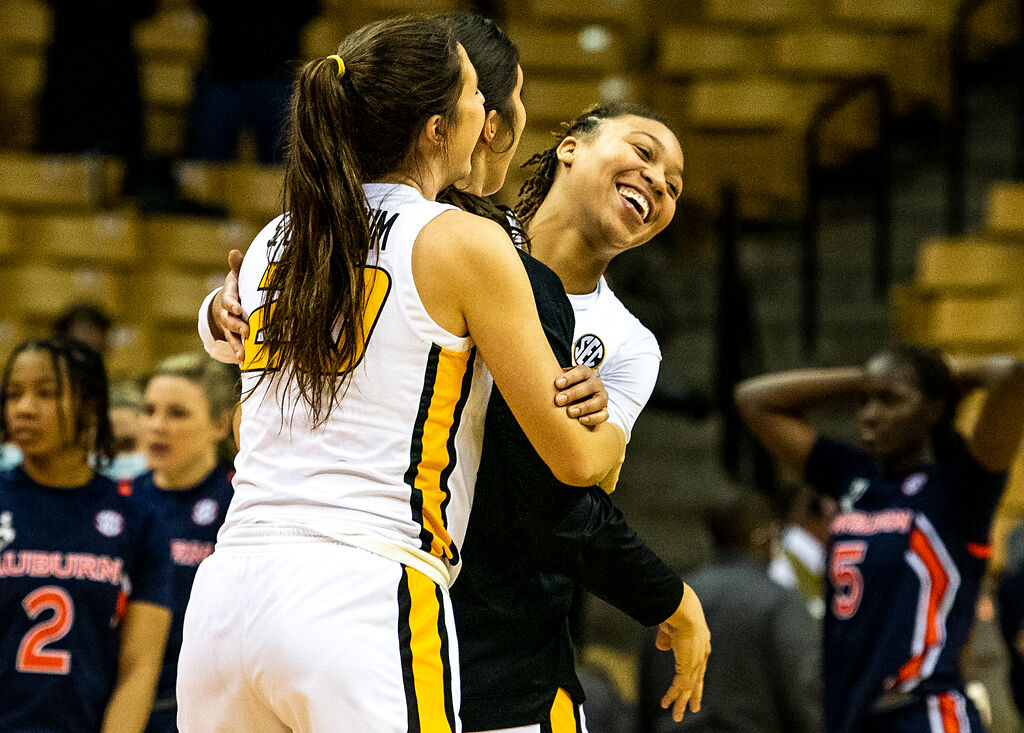 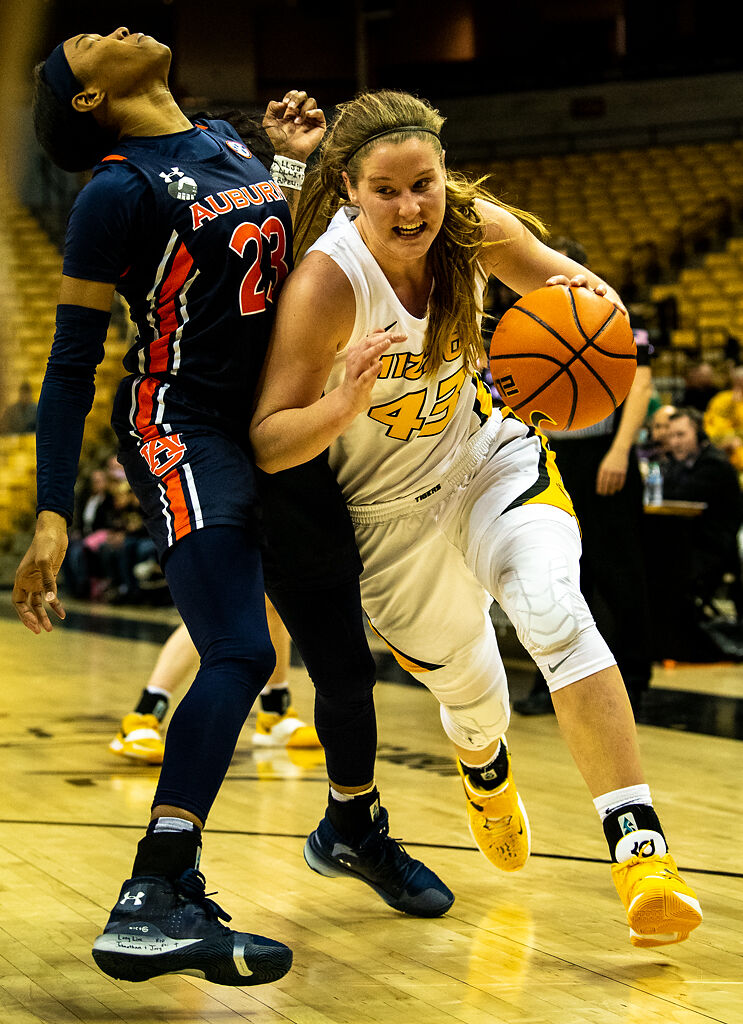 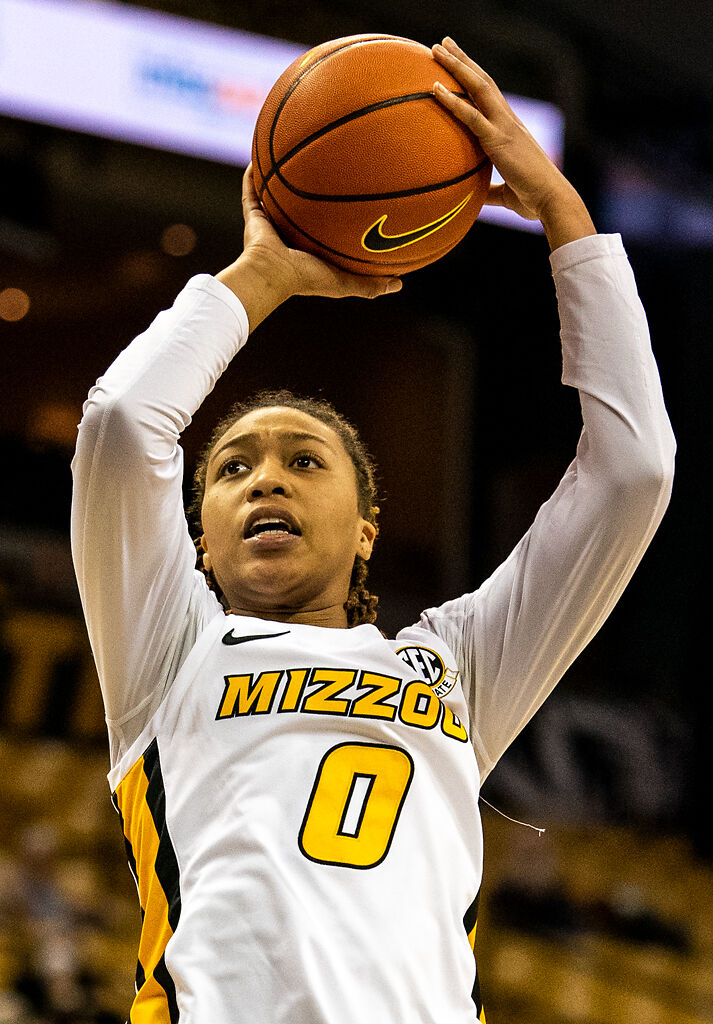 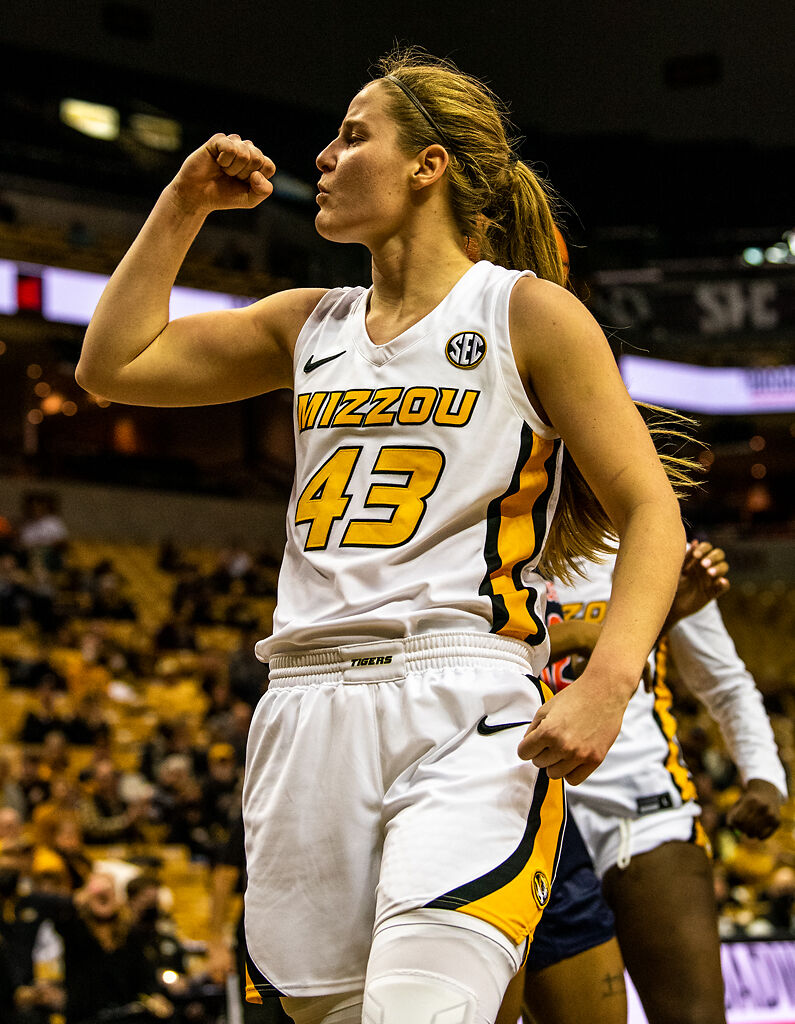 Missouri junior Hayley Frank pumps her fist after scoring a field goal in the paint Thursday at Mizzou Arena. Frank made four of her nine attempted field goals. 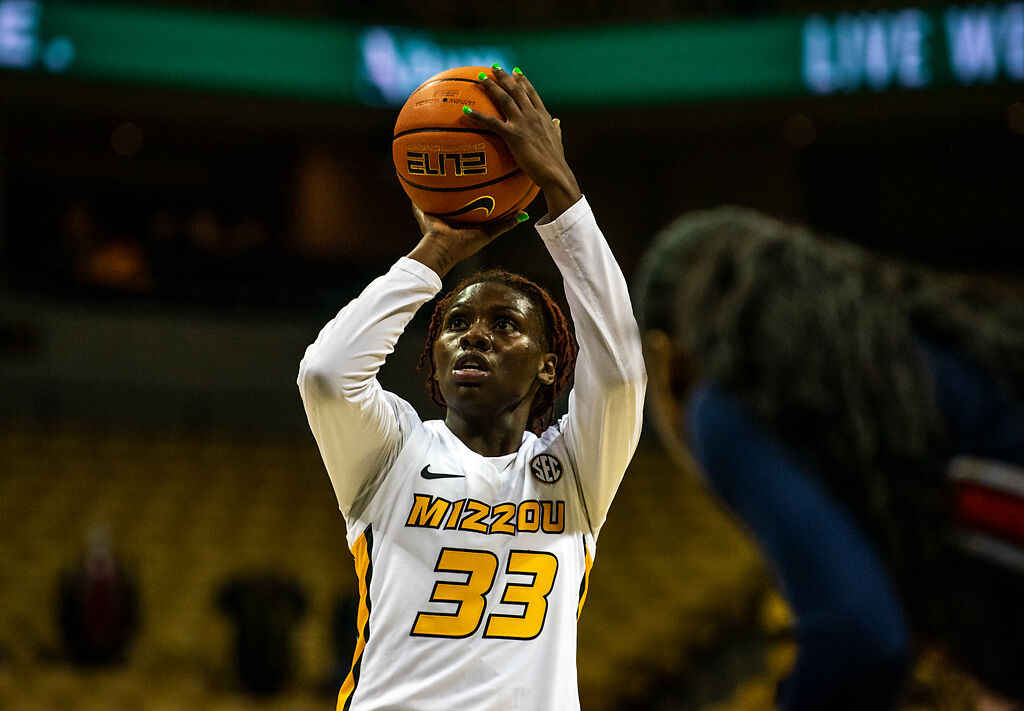 Missouri junior Hayley Frank pumps her fist after scoring a field goal in the paint Thursday at Mizzou Arena. Frank made four of her nine attempted field goals.

Not by a long shot.

That was proved in Thursday night’s game against Auburn. Missouri trailed by four points going into halftime before outlasting Auburn in a 72-63 overtime win.

It was the second overtime game in a row for Missouri, as adversity proves to be nothing new for coach Robin Pingeton and her team. Coming off a weeklong hiatus because of players in COVID-19 protocols, Missouri had little time together before Thursday night’s game.

Pingeton’s team’s week off was apparent, especially in the first half.

“I knew it was gonna be kind of clunky. It’s hard, you know, rhythm, timing, getting your legs back,” Pingeton said. “It’s been like the wild, wild west you go from day-to-day and not knowing if you’re gonna have an individual.”

The game plan was different for Missouri this go-round, as it took advantage of its height at the forward position with senior LaDazhia Williams. Williams had 2 inches over Auburn’s tallest player and came into Mizzou Arena to prove not only was she back to her regular productiveness but that she too is a game-changing player for Missouri.

“The stat line honestly makes me so proud of Day, what she did from the free-throw line,” Pingeton said. “I feel like I’m constantly barking at her for the last six months about getting off the rim and getting to the free-throw line.”

From start to finish, Williams added to the limited positives from the nervy win. She finished with a career-high 25 points by dominating the paint and getting to the free-throw line..

Missouri needed more than just the 6-foot-4 forward to fight off shifty Auburn guard Sania Wells. She, like Williams, had a stellar outing from the tipoff, scoring 20 points and grabbing four rebounds.

“I thought we did a good job of taking away their transition,” Williams said. “I think they’re really dangerous in transition. I don’t know how many live-ball turnovers they scored on, so that was an issue for us.”

While Williams and Wells were the standouts for their squads, the determining factor was which team’s go-to performers would step up.

For Auburn, its usual standouts came through along with Wells. Auburn had huge contributions from Honesty Scott-Grayson and Aicha Coulibaly. They each finished with 15 points, and Coulibaly grabbed eight rebounds.

Auburn caused Missouri issues because of its overwhelming perimeter defense and its forced turnovers. Auburn scored 24 points off MU’s 20 turnovers to stay in the game.

“I really think we just turned up the intensity (in the second half),” Blackwell said. “Now, we had some mishaps, we definitely did. We missed rotations, and they had some midrange shots in the first half. I think they’re better when they’re playing downhill, so we had to live with that a little bit.”

Despite MU’s ball-fumbling and uncharacteristic mistakes, Frank, Blackwell and Hansen balanced things out. Hansen had three out of the four made 3-pointers for Missouri, giving her 17 points. Blackwell, similar to Williams, brought a much-needed intensity to this matchup, which resulted in her scoring her 1,000th career point. Having not played since Dec. 22, Blackwell earned her 10th double-double with 13 points and 14 boards.

Frank took a little longer to find her shot but proved vital for Missouri’s effort down the stretch with several baskets while getting fouled and hitting the subsequent free throw. She finished the game with 15 points, eight rebounds and a career-high four blocks.

Missouri looks ahead to Sunday’s game against Arkansas.

Pingeton’s team has proved itself to be among the grittier teams in the conference, which may be a valuable trait come March.