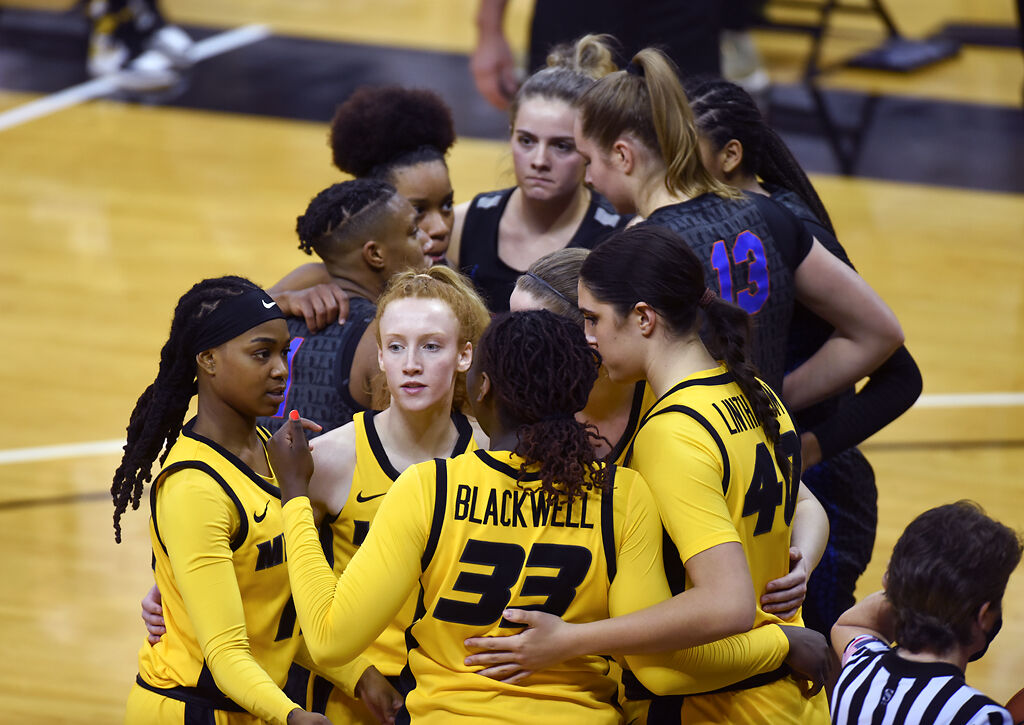 The Missouri women’s basketball team gathers in between plays with Florida right behind it Sunday at Mizzou Arena in Columbia. 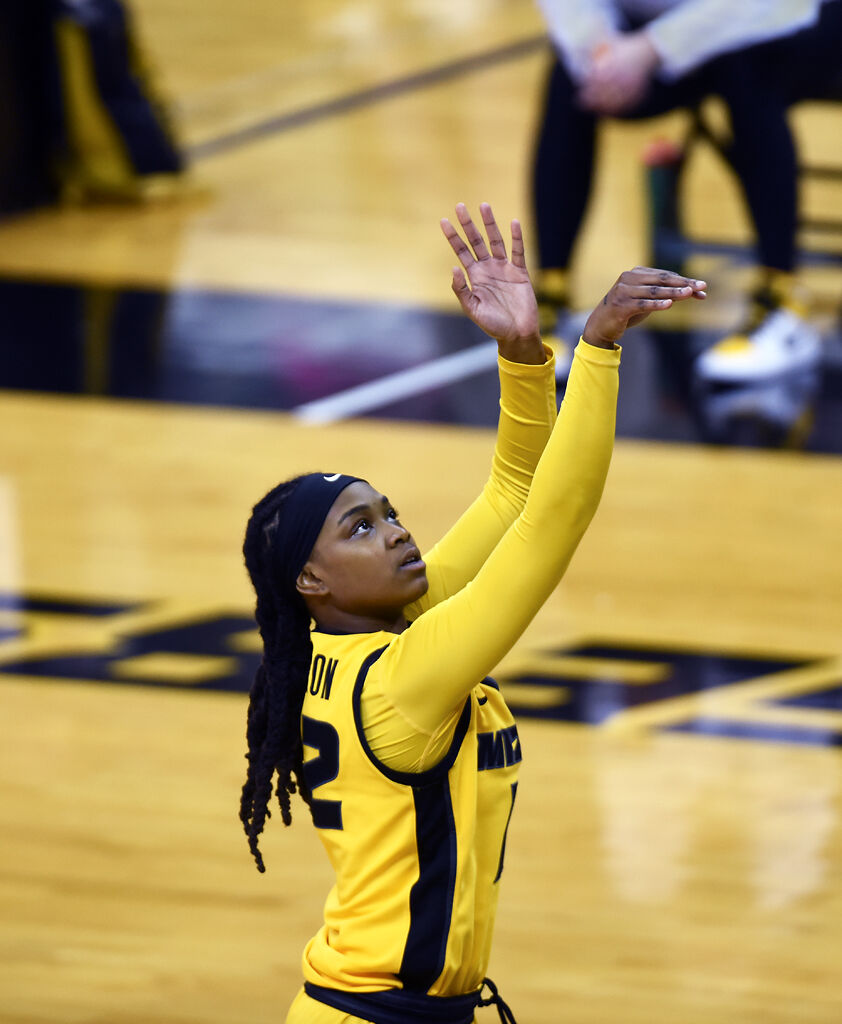 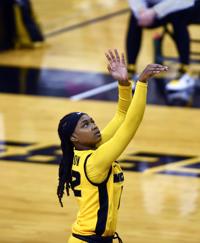 Missouri senior Shug Dickson shoots a free throw Sunday at Mizzou Arena in Columbia. The game against Florida was the Tigers’ Senior Day, acknowledging Dickson and teammate Shannon Dufficy for their senior status. 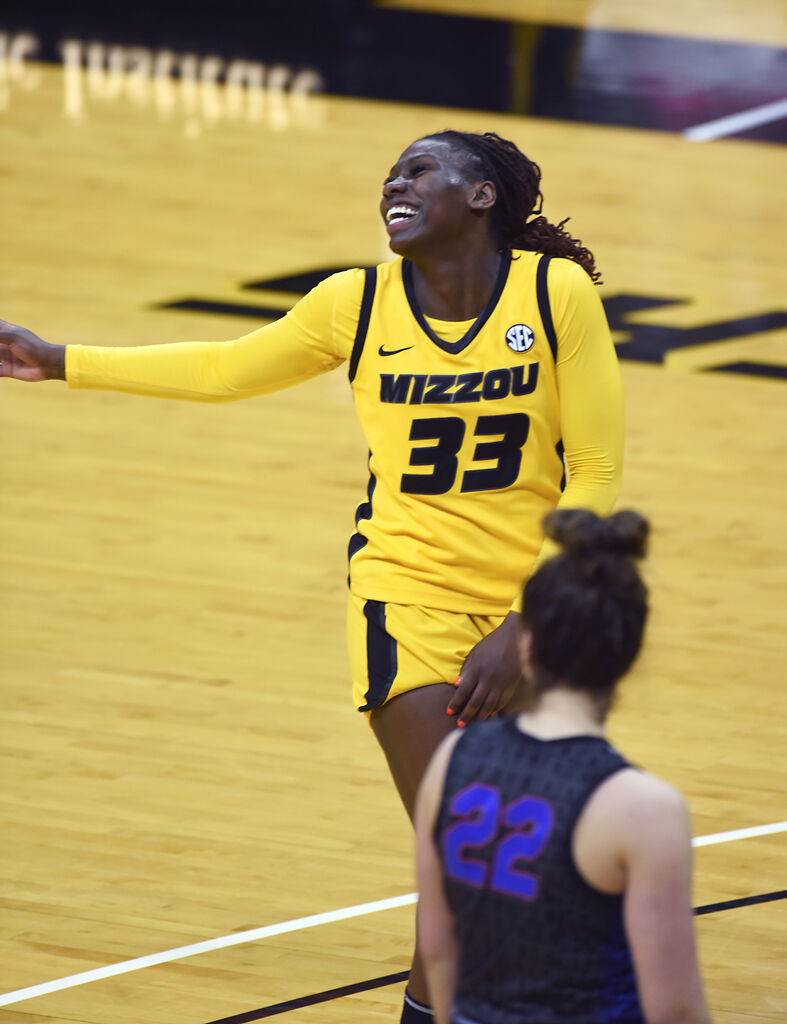 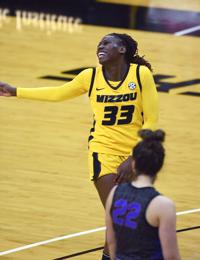 Aijha Blackwell laughs before putting up a free throw Sunday at Mizzou Arena in Columbia. Blackwell scored 21 points in the game, the second-highest point total of the evening behind Hayley Frank’s 26. 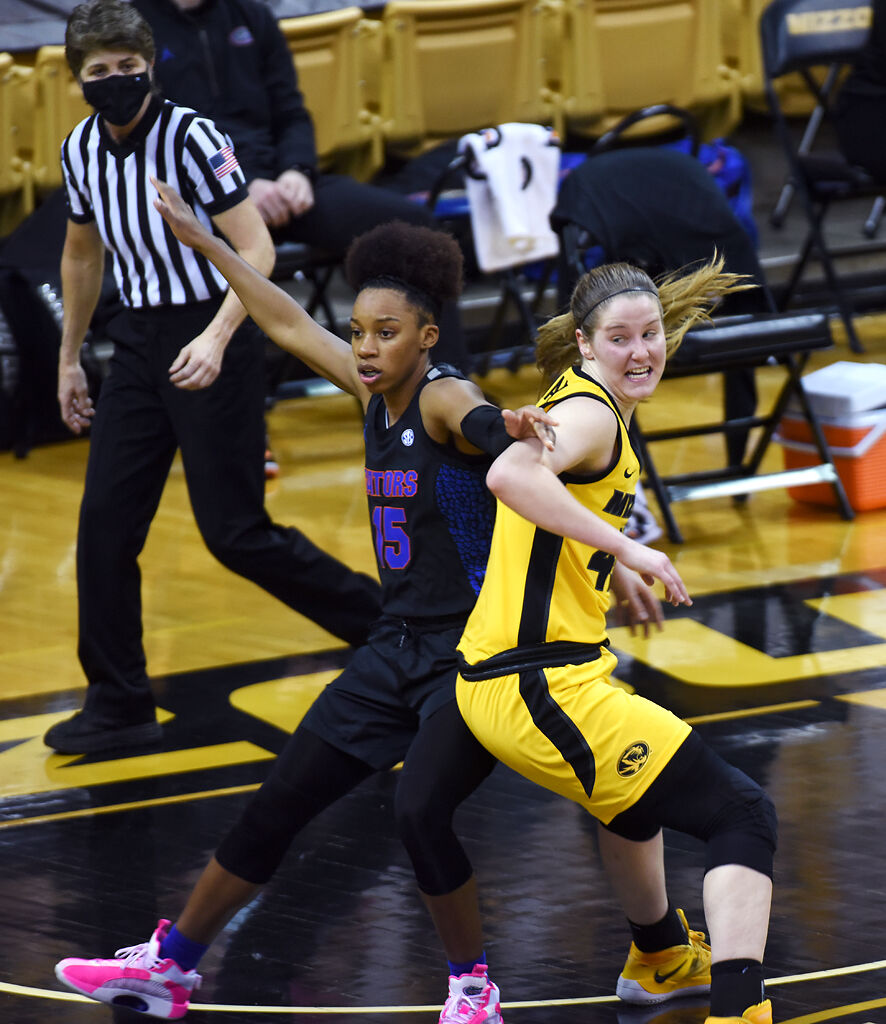 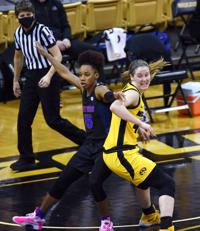 The Missouri women’s basketball team gathers in between plays with Florida right behind it Sunday at Mizzou Arena in Columbia.

Missouri senior Shug Dickson shoots a free throw Sunday at Mizzou Arena in Columbia. The game against Florida was the Tigers’ Senior Day, acknowledging Dickson and teammate Shannon Dufficy for their senior status.

Aijha Blackwell laughs before putting up a free throw Sunday at Mizzou Arena in Columbia. Blackwell scored 21 points in the game, the second-highest point total of the evening behind Hayley Frank’s 26.

After Aijha Blackwell missed her first layup attempt, she caught her own rebound and kicked it out to a wide-open Shannon Dufficy. With finesse and confidence, Dufficy punched in the first three points of Missouri’s Sunday afternoon game against Florida.

Dufficy and Missouri’s (8-9, 4-8 Southeastern Conference) other redshirt senior, Shug Dickson, took turns dominating Florida (10-10, 3-9 SEC) offensively all first half in their last game at Mizzou Arena. The 96-80 win over the Gators gave the Tigers their fourth SEC win, a season sweep over Florida and broke a two-game losing streak.

Despite not having its leading scorer in junior forward Ladazhia Williams due to an ankle injury, Missouri’s upperclassmen did all the dirty work.

Dickson and Dufficy combined for 39 of the team’s 96 points.

Sophomore Hayley Frank picked up where the seniors left off in the third quarter. She went on a 10-minute rampage, almost putting the Gators to sleep with knockout 3-pointers and mid-range shots.

Next up to lead the offensive was Blackwell. After already scoring 13 points in the first half and third quarter, the 6-foot guard planted her feet in the paint and never left during the fourth quarter. Her aggressive putback layups and ability to snatch a rebound out of the tallest defender’s hands gave Missouri the needed cushion to keep Florida at bay.

“You never know the kind of emotions Senior Day is going to bring,” coach Robin Pingeton said. “I was happy for our seniors tonight and we obviously had a lot of kids step up with Ladazhia out. I thought offensively, we’ve probably played as well as we’ve done all year.”

As the Gators went without one of their go-to scorers in Lavender Briggs, they struggled to keep up with Missouri’s scoring presence. Florida did manage to show some signs of life from redshirt seniors Kiara Smith and Danielle Rainey. Smith scored a season-high 34 points in Sunday’s loss and did everything in her power to play catch up. Rainey provided needed 3-pointers and aggression on defense, finishing with 12 points.

Frank, who led Missouri with 26 points, was one of five Tigers to score in double figures. Blackwell followed with 21 points and 14 rebounds, while Dickson had a season-high 20 points and six assists.

Dufficy scored a season-high 19 points, shooting 5-of-7 from beyond the arc. The Tigers tied a single-game program record with 18 3-pointers.

“I’ve been having a little rough year I guess from beyond the 3-point line, so it felt good watching them shots go in and getting my teammates involved and them hitting their shots as well,” Dickson said.

The last time out Missouri suffered an 18-point loss to No. 24 Georgia on Feb. 14. Before that, it was a 15-point loss to No. 1 South Carolina on Feb. 11. The ever-growing chip on the Tigers’ shoulder made way for some explosive offense and momentum to head into the final games of the regular season.

Although the Tigers have yet to get a statement win over a ranked opponent so far this season, games like this one remind them that the record can be deceptive. Missouri heads into its remaining schedule with confidence to make a run .

“The last couple of days everyone has been buying into the system,” Dufficy said. “I mean I think it has kind of hit us that it is coming toward the end of the season and we need to make a run now. Now is our time to get momentum and I think that’s motivated us just that extra bit to play harder and more for each other.”

Pingeton’s squad returns to action against No. 21 Tennessee at 7 p.m. Thursday at Mizzou Arena. The game will be broadcast on SEC Network+.