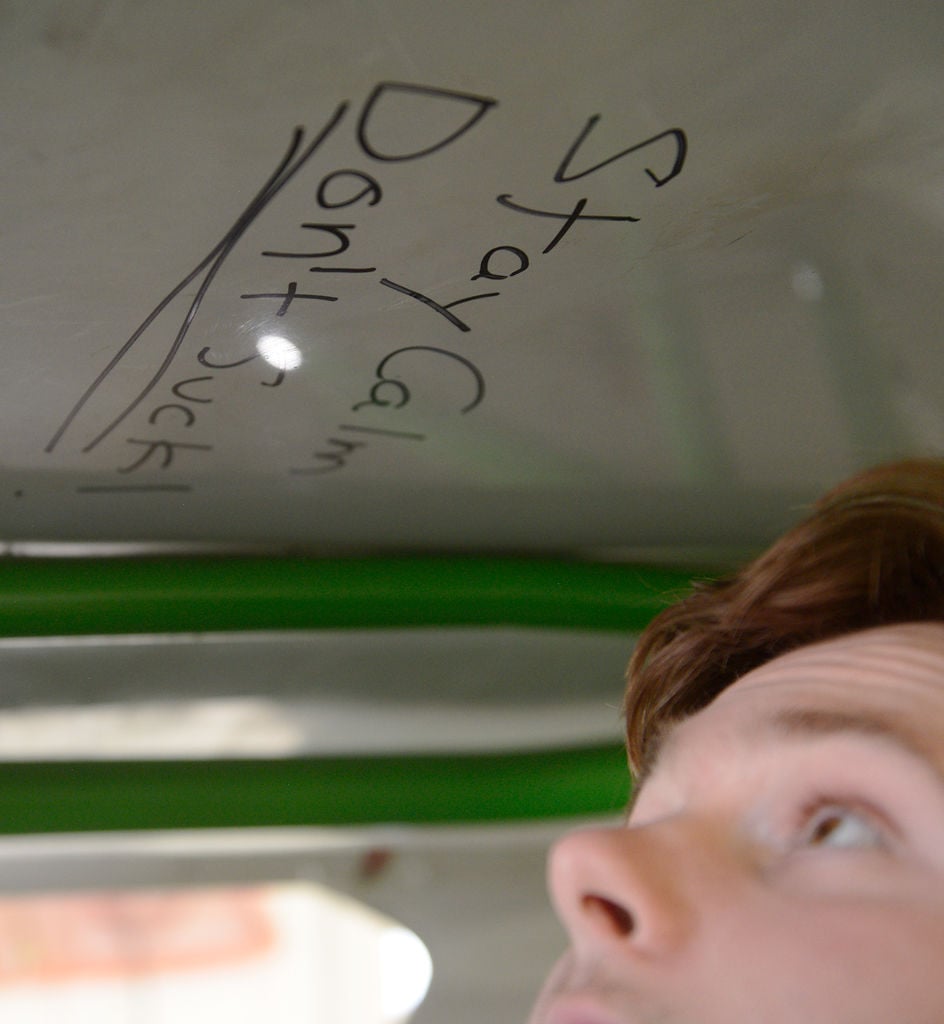 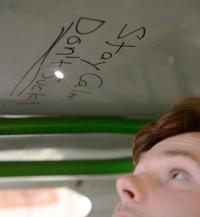 Louie Lovelace looks up at the roof of his race car after writing his inspirational motto Oct. 13 at his home garage in Elsberry. Lovelace had the same motto in his previous race car, in which he suffered a racing accident Sept. 13. 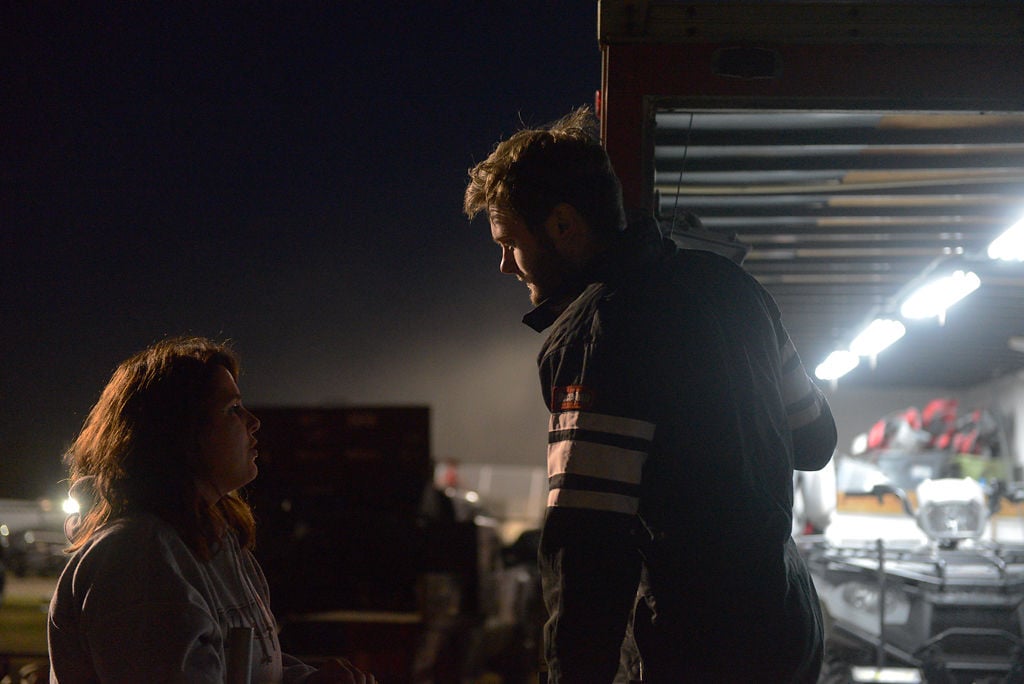 Louie Lovelace chats with his mother, Carolyn Lovelace, after running some practice laps Oct. 17 at the Tri-City Speedway in Granite City, Illinois. During his race Oct. 19, Lovelace was hit by another racer and spun out. The car had to be pushed off the track by another vehicle and the family decided not to risk more damage to the race car, ending his racing activity for the year. 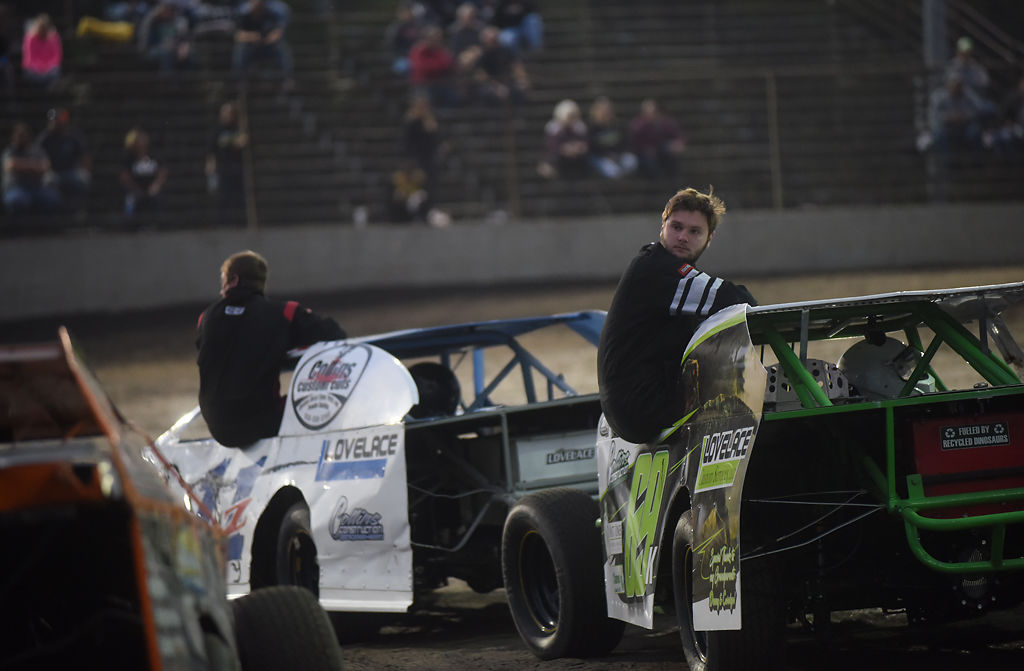 Louie Lovelace watches other B-modified race cars complete their heat laps Oct. 19 at the Tri-City Speedway in Granite City, Illinois. Lovelace is parked behind his cousin Bryan Collins, who also races under the Lovelace team. 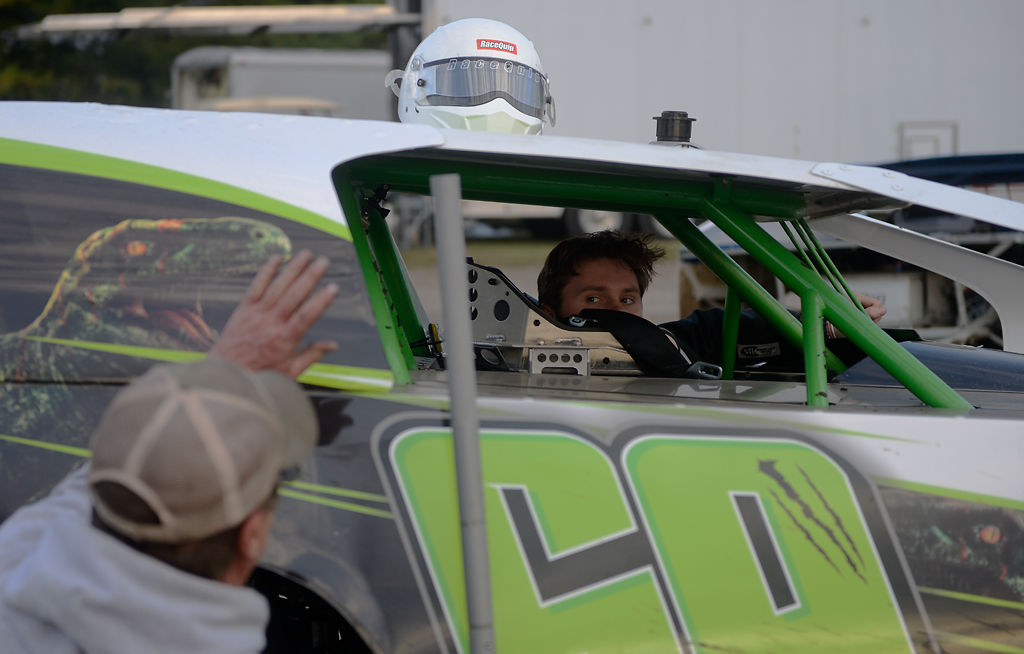 Louie Lovelace steps on the brake pedals in his race car as his father, Jim Lovelace, checks on the braking system Oct. 19 at the Tri-City Speedway in Granite City, Illinois. “My dad loves racing as much as I do; I really want to show them that I can carry it on,” Louie said. 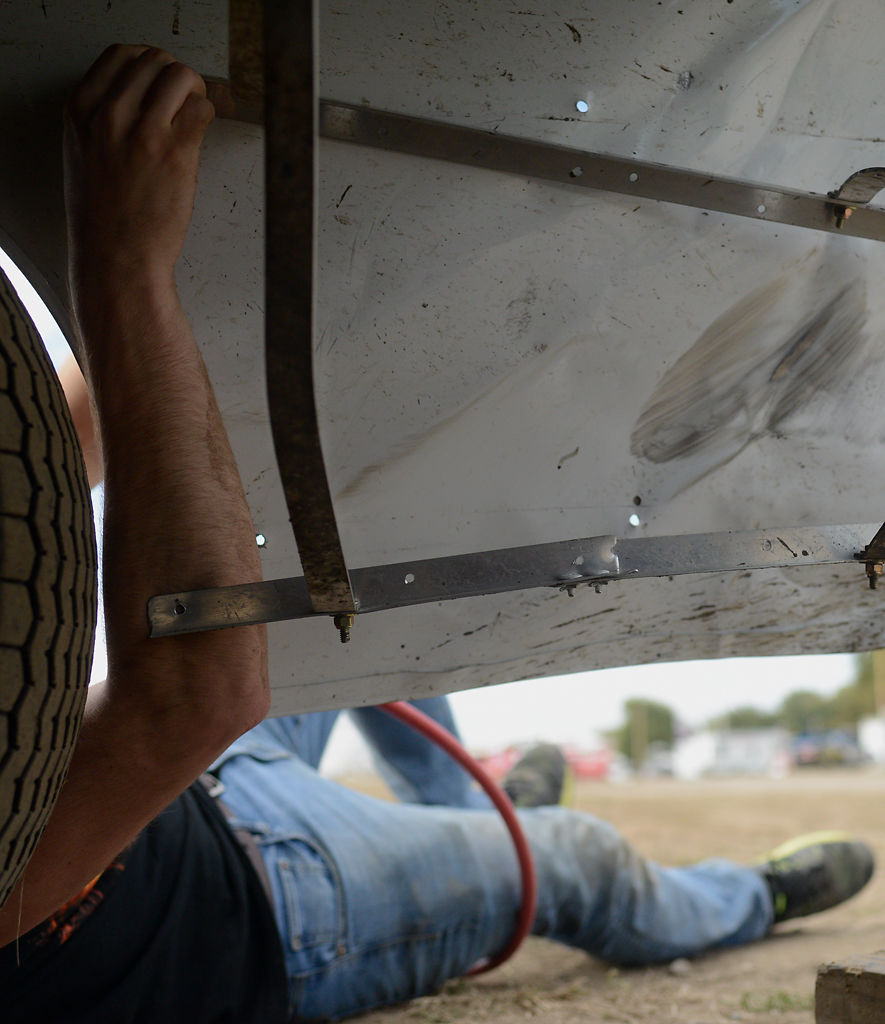 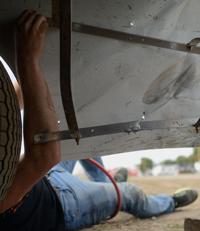 Louie Lovelace inspects some damage done to the sheet metal plating on the rear end of his race car Oct. 19 at the Tri-City Speedway in Granite City, Illinois. Lovelace’s previous crash still plays on his mind, especially when he thinks about the emotional impact on his family. “My mom came back and told me that she thought I was dead for three minutes, and I can’t even imagine what that had to feel like,” Lovelace said. 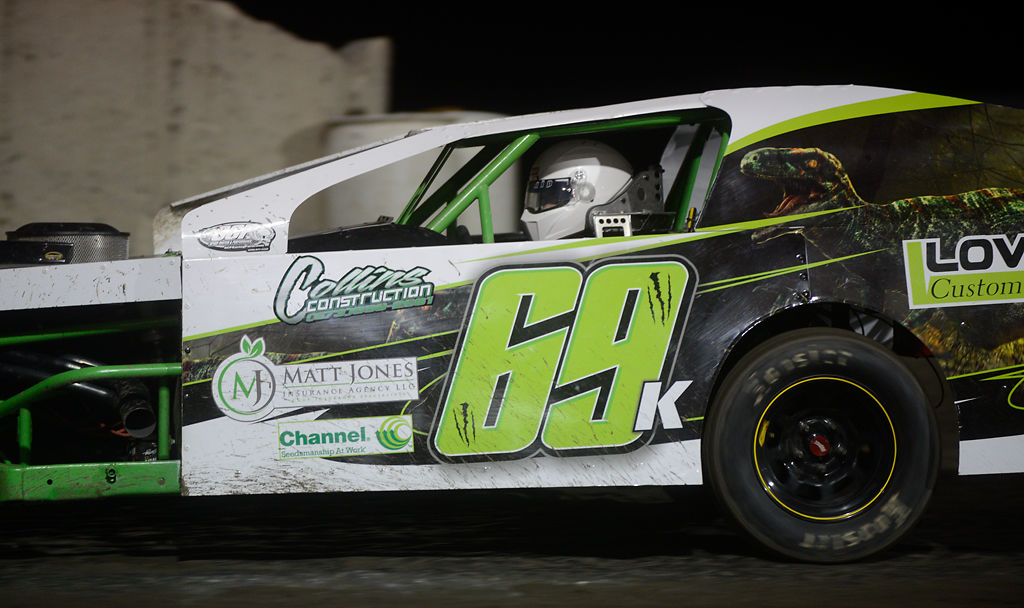 Louie Lovelace races a B-modified car Oct. 18 at the Tri-City Speedway in Granite City, Illinois. The dinosaur decorations on his race car reflect his love of paleontology, which he has had since he was a kid. Lovelace is currently majoring in geology at MU. 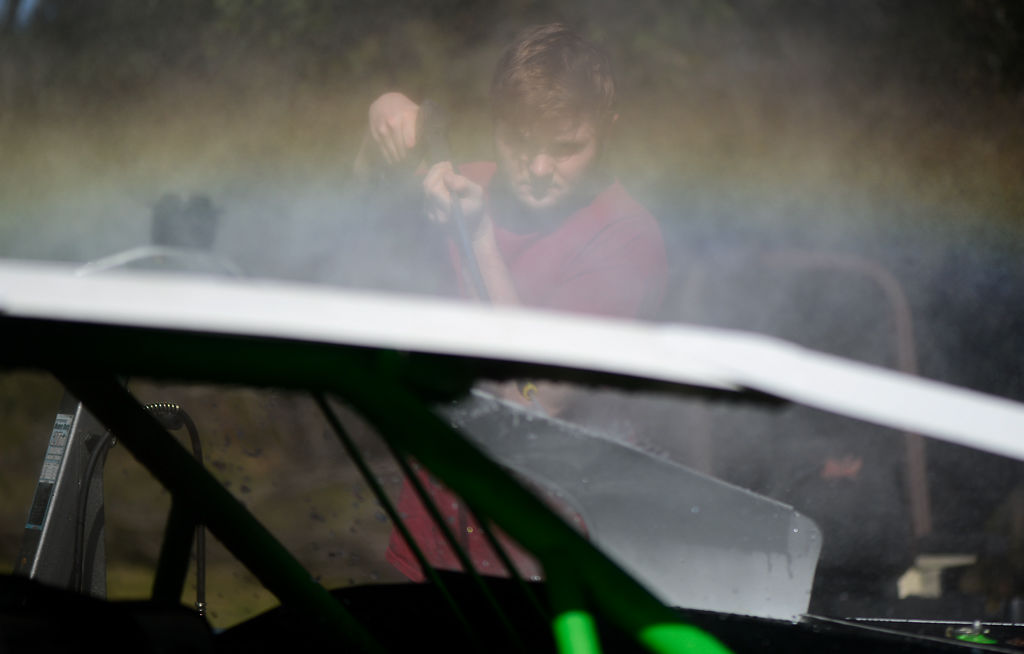 Louie Lovelace washes off dirt from the previous night’s races off his race car Oct. 19 at the Tri-City Speedway in Granite City, Illinois. Racing is a family affair for the Lovelaces. His grandfather, Denny Lovelace, was once a race car owner and his father, Jim Lovelace, is a pit crew chief. 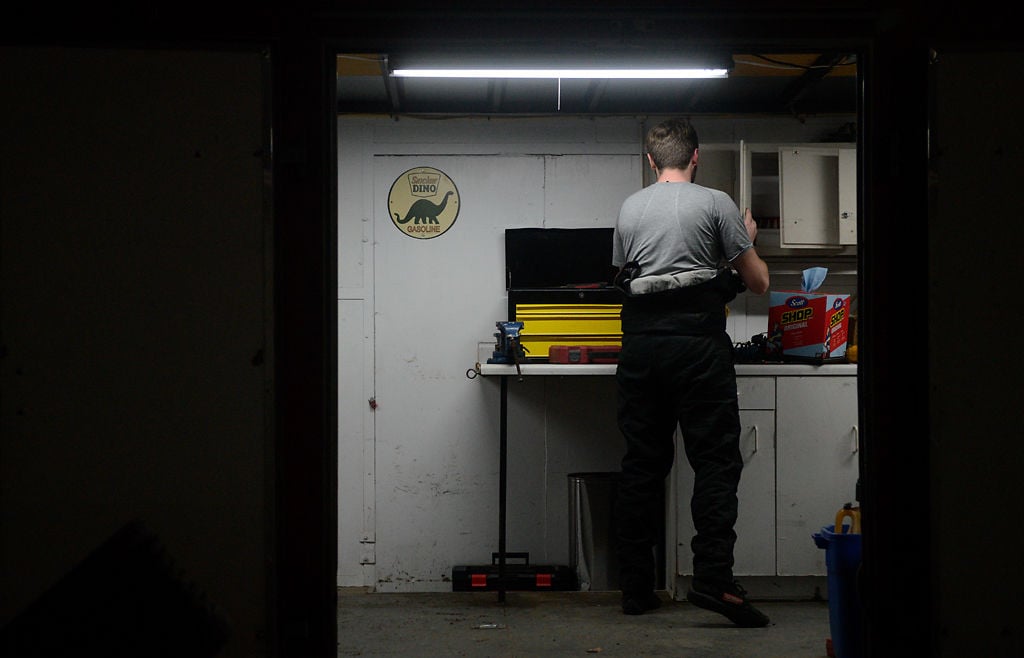 Louie Lovelace packs up his equipment into the workshop trailer on Oct. 17 at the Tri-City Speedway in Granite City, Illinois. Lovelace is still awaiting his first competitive feature win, and his grandfather has a bottle of champagne stored away for that occasion. 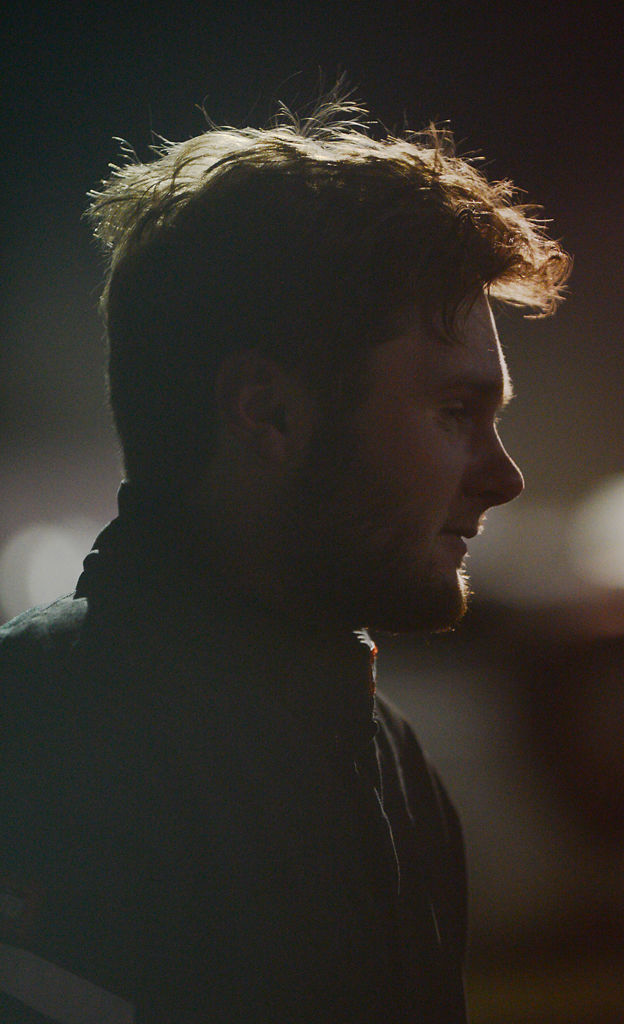 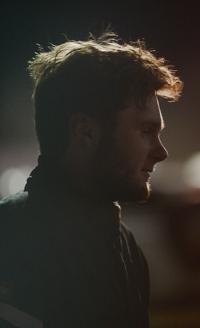 Louie Lovelace waits at his workshop trailer for his turn to run practice laps Oct. 17 at the Tri-City Speedway in Granite City, Illinois. Lovelace hopes to advance to race A-modified cars, which are much faster, in the near future. 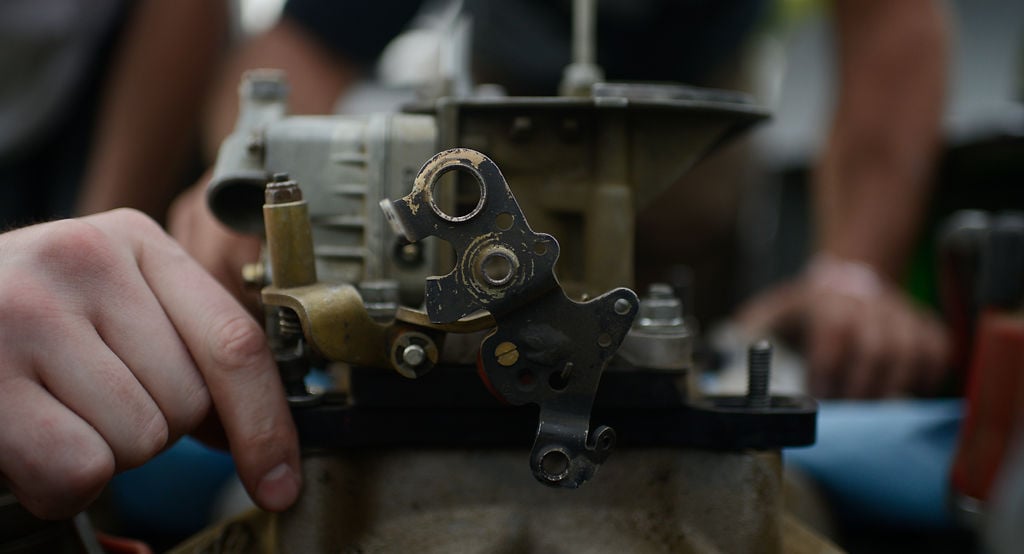 Louie Lovelace fine-tunes the engine of his race car with his cousin, Bryan Collins, Oct. 19 at the Tri-City Speedway in Granite City, Illinois. This feature race was Lovelace’s first after his crash Sept. 13 and his last for the year. 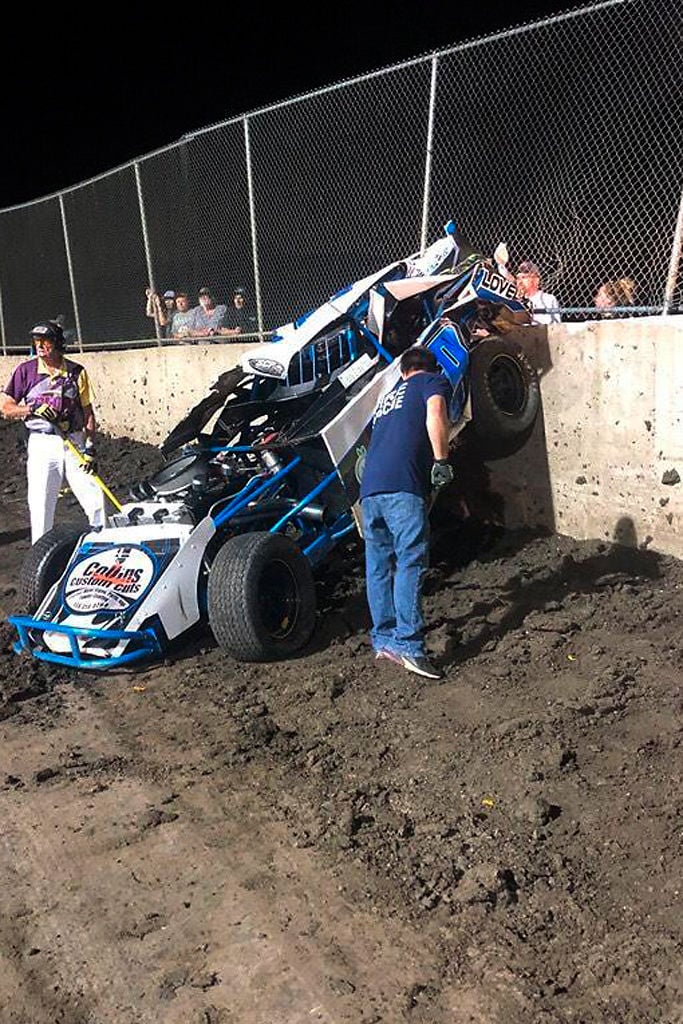 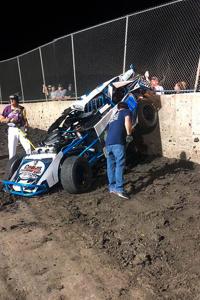 Louie Lovelace’s car sits upside down on the track Sept. 13. Lovelace flipped during the race but walked away from the crash with only minor scrapes and bruises. 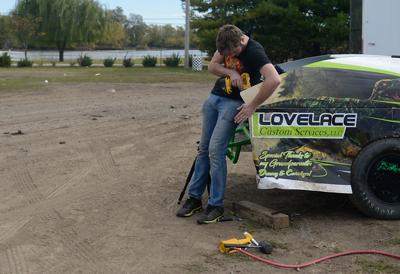 It was the last lap of the race that Friday night, Sept. 13, at Tri-City Speedway in Granite City, Illinois.

As Lovelace rounded the first corner, he closed in on the driver ahead of him. Hitting the straightaway, he pressed on the gas, taking the inside track. As both drivers neared the second turn, he began to pull ahead. It was all coming together. Lovelace was going to be in position in the next turn. He was going to qualify.

Back on the Track from Columbia Missourian on Vimeo.

Then all at once, he felt himself go weightless, and suddenly he saw the ground rushing toward him.

The next thing Lovelace remembers is the feeling of hitting the concrete wall as smoke came from the engine. The racer took off his helmet and threw it out the window. People rushed in from everywhere to get him out of the wreck. The car had managed to land at such a high angle that Lovelace had to be helped out so he wouldn’t fall when exiting the vehicle.

As he was gathering his bearings, a man approached and said, “I’ve worked here for 11 or 12 years, and that’s by far the worst accident I’ve ever seen happen here."

Lovelace is currently a junior at MU, where he double-majors in geology and business. One weekend during the summer before his freshman year, he took his friends to the track. Lovelace was no stranger to racing. His family had been involved with the sport for many years; his father was a crew chief. That particular weekend with his buddies, he was struck by a familiar inspiration. He wanted to take a crack at it from behind the wheel.

“Growing up, I had always dreamed about maybe someday getting into a race car,” Louie said. “As soon as I pull onto the track and put my visor down, I don’t even realize the people are out in the crowd. It’s just laser focus. There’s just no substitute.”

At first, his parents were skeptical. They even tried talking him out of it. Eventually, however, they made the decision to support their son and the family came together to make his goal a reality. They bought a chassis and got to work assembling the cars he would need. They researched racing categories and looked at his school schedule to find the best fit for him.

Together, the family decided that Louie should race B-Mod cars, a class of dirt track racing. His schedule was structured so that most of his school homework was taken care of during the week. Then, on race weekends, he could leave campus around 2 p.m. Friday to head home to Elsberry or to Tri-City Speedway.

The night of the wreck, the car was destroyed, but Louie miraculously walked away from the crash with only a few small bruises and minor pains. By now, seven weeks later, most of his injures have already healed. Seeing him walk around, you wouldn’t suspect he’d been in a crash at all. Many have said Louie was very fortunate that night.

But everything leading up to the wreck seemed far from fortunate for Louie and his family.

First, he’d had an opportunity to qualify for the A-Feature, a race where the top cars compete for prizes determined by their finishing position, earlier in September. But during Louie’s qualifying race on that attempt, he spun out and was unable to secure a spot.

So that put him in the B-Feature, a race that gives drivers who don’t make the A-Feature through a qualifying session one more chance at a spot in it. That race was set for mid-September, Friday the 13th. And when the Lovelace family arrived at the track that night, a full moon hung overhead. As the evening progressed, one of Louie’s friends had mechanical problems with his car, making him unable to compete in the rest of the event.

Finally, during Louie’s race, a caution was thrown on the last lap, and officials eventually ruled that the final lap would be restarted. However, during the commotion of the re-start, Louie was misplaced in the lineup, which caused him to be behind the car he’d been in front of before the race was stopped. Before anything could be said, the race was off again. One lap to go.

“It was like things just lined up,” said Jim Lovelace, Louie’s father. “It was a perfect storm of, like, everything. It could have went so much better, but it didn’t. I don’t know how to really put it in words, but it was just a weird night. I actually remember looking at that full moon before he went out for that race and just kind of saying a little prayer to myself. Yeah, he wrecked, but, yeah, he came out pretty much unscathed, so we feel very blessed.”

During the accident, the Lovelace family watched in horror from the stands as Louie’s car flew into the air. Jim and Carolyn Lovelace, Louie’s mother, both sprang into action.

“I ran to the pits, got our four-wheeler, drove around the side of the track to get to that back entrance, and when I came on the track, there he was standing there, and I could not believe my eyes,” Jim said.

Carolyn, on the other hand, didn’t go for the four-wheeler. She fell to her knees, prayed and then kept running with the rest of Louie’s family.

“We were literally just running through the pits, and I was looking for a hole in the fence. I was almost ready to climb the fence to get through,” Carolyn said. “When you’re getting that close, you just don’t want to think that’s the last time you see your kid. And then when I saw him, I was ready to kill him, after I knew he was OK.”

After insisting he get a medical checkup, Carolyn walked her son all the way back to the trailer, never letting go of him.

Despite all that has happened, Louie is in high spirits. He still wants to race and still wants to continue his studies at MU. He came to the university through the business school, but he always had an interest in geology. Louie’s cars even have decals of dinosaurs on the sheet metal of the body. After taking a class on paleontology, a professor convinced Louie to double-major. Now that he’s in the program and participating in his passion for geologic research, Louie is also considering graduate school for geology. He is currently enrolled in 21 credit hours a week at school on top of his geologic research.

No matter what Louie decides to do, his family will be there to support him. But if the opportunity presents itself, Louie says he will race for the rest of his life — even after the crash.

“I mean, that’s just something you can’t think about,” he said in the days after that close call in September. “I don’t know if it’s a good way to look at it. But if that’s going through your head while you’re out racing, you’re not going to really be able to overcome that.”

Two weekends ago, Louie put that thought to the test for the first time since Friday the 13th when he raced in the B-Mod Bash, the final event of the season at Tri-City Speedway. Over 60 racers took to the track in hopes of walking away with glory.

On the second night of the event, Louie came up on one of the turns, feeling good. But as he prepared to take the turn, another driver suddenly plowed into the back of his car.

Louie’s engines weren’t responding as he tried to get back into the race. He waited for the officials to wave the caution flag, but the moment never came. All he could do was get his vehicle off to the side of the track before the other racers came speeding back through the turn.

With that, the Lovelace family packed up their things and accepted their end to the season.

And still Louie isn’t shaken by the crashes.

“I love the sport. It’s an addiction,” he said. “People divorce their wives to continue racing. It’s something that once you get into it, you just can’t shake it. You’ll make yourself broke before you give up racing.

“If you’ve got something you really like doing, do it,” he said. “Don’t let anything get in your way.”