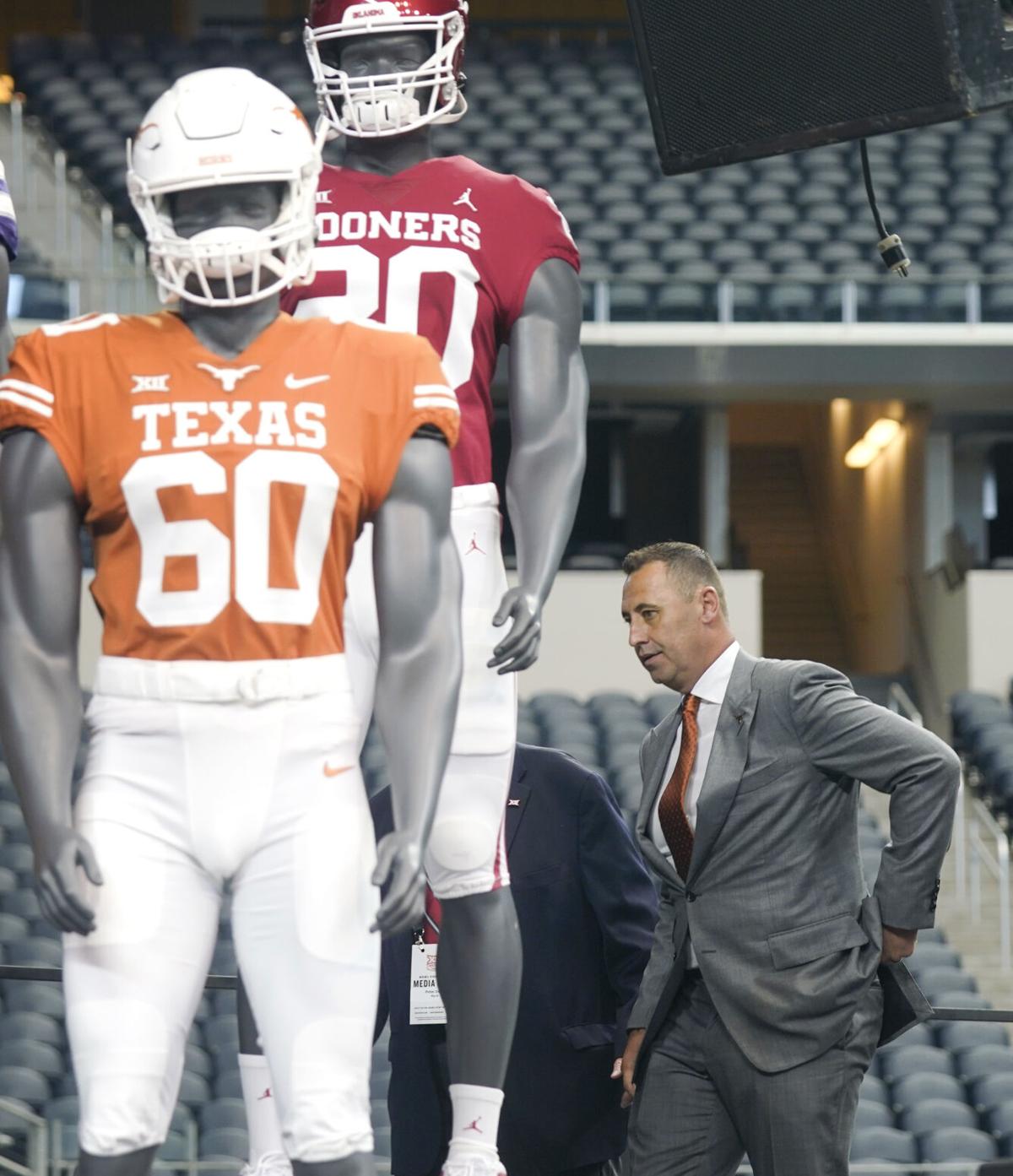 Texas head coach Steve Sarkisian walks on stage behind mannequins wearing Texas and Oklahoma uniforms during the Big 12 Media Days on July 15 in Arlington, Texas. If Texas and Oklahoma do join the SEC, there could be significant realignment.

Big 12 commissioner Bob Bowlsby is shown on the giant screen as he speaks during Big 12 Media Days on July 14 in Arlington, Texas.

Texas head coach Steve Sarkisian walks on stage behind mannequins wearing Texas and Oklahoma uniforms during the Big 12 Media Days on July 15 in Arlington, Texas. If Texas and Oklahoma do join the SEC, there could be significant realignment.

Big 12 commissioner Bob Bowlsby is shown on the giant screen as he speaks during Big 12 Media Days on July 14 in Arlington, Texas.

The last time Texas got a wandering eye for an alternative conference affiliation it fueled a series of realignment in college sports that nearly killed the Big 12.

Texas is once again exploring free agency, stealing the headlines at the Southeastern Conference media days and cranking up speculation about another round of conference shuffling.

The Houston Chronicle reported Wednesday, citing a source it did not identify, that Big 12 powers Texas and Oklahoma have reached out to the SEC about potentially joining the league.

The newspaper cited a “high-ranking official with knowledge of the situation” and said an announcement could come in the next couple of weeks. Adding two members would give the powerhouse SEC 16 teams, the largest in major college football.

A person with knowledge of the situation confirmed to the AP on Wednesday night there have been discussions between Texas and Oklahoma and SEC officials about switching conferences, but no formal invitations have been extended.

The person, who spoke on condition of anonymity because the talks were intended to be confidential, said officials from Texas initiated the discussion.

Questions about the report were greeted by a series of no comments from the primary parties involved, but no denials.

“I’m talking about the 2021 season,” SEC Commissioner Greg Sankey said as Day 3 of the SEC's four-day football talk-fest in Hoover, Alabama, wound down.

Texas A&M athletic director Ross Bjork was adamant about not wanting the Longhorns to join the SEC.

“We want to be the only SEC program in the state of Texas,” Bjork told reporters in Hoover. “There’s a reason why Texas A&M left the Big 12, to be standalone, to have our own identity. And that’s our feeling.”

SEC bylaws require at least three-fourths (11) of the members to vote in favor of extending an invitation to join.

Big 12 Commissioner Bob Bowlsby, whose 10-member league would suffer a major blow with such defections, did not return messages from AP seeking comment.

“The college athletics landscape is shifting constantly," Oklahoma said in a statement. "We don’t address every anonymous rumor.”

A Texas statement offered a similar response: “Speculation always swirls around collegiate athletics. We will not address rumors or speculation.”

Just last week at Big 12 media days in Arlington, Texas, Bowlsby talked about how conference realignment was no longer a top-line issue for the Big 12.

“Not to say it couldn’t happen, but it’s no one of the things that keeps me up at night,” he said.

Any move to leave the Big 12 would be complicated by an agreement its schools made after the last round of realignment to hand their media rights over to league through their current television deals. The grant of rights lines up with the Big 12's contracts with Fox and ESPN and runs through the 2024-25 school year.

Back in 2010, the then Pac-10 — led by new commissioner Larry Scott — tried to woo Texas and five other Big 12 schools into the West Coast-based conference to form a Pac-16.

Texas stayed put and instead started its own television network. After another flirtation between Texas, Oklahoma and Scott, Texas A&M bolted for the SEC in 2012 and Missouri followed the Aggies.

The Big 12, which had already lost Nebraska to Big Ten and Colorado to the now Pac-12, managed to hang on by inviting TCU and West Virginia.

College sports was turned upside down for about three years as conferences jockeyed to fortify themselves and schools scrambled to not be left out.

The Big East was poached right out of the major college football business before finally reconstituting as the American Athletic Conference.

Life without Texas and Oklahoma would be uncertain — at best — for the other schools in the Big 12.

Even an unconfirmed report, prompted an assertive response from Oklahoma State on Wednesday.

“If true, we would be gravely disappointed,” the Cowboys’ statement said. “While we place a premium on history, loyalty and trust, be assured, we will aggressively defend and advance what is best for Oklahoma State and our strong athletic program, which continues to excel in the Big 12 and nationally.”

The mere possibility of adding Texas and Oklahoma to what is already the strongest football conference in the country has to draw the attention of the other Power Five conferences. Especially as the leaders of those leagues look to expand the College Football Playoff from four to 12 teams.

Oklahoma is the only Big 12 team to make the playoff, doing so four times. The road to the CFP would be tougher through the SEC but a bigger field could provide more paths.

The SEC recently signed a new television deal with ESPN that gives the cable TV sports giant all of its rights. It is unclear if adding Texas and Oklahoma would create an opportunity for the SEC to increase the value of those contracts for all its members and not just provide enough to cover additions at the current rate.

The SEC announced earlier this year it distributed about $45.5 million each to its members. The Big 12 schools received about $10 million less from its conference.

When Texas A&M coach Jimbo Fisher was asked about Texas and Oklahoma reportedly being interested in the SEC during his session with the media in Hoover, he said: “I bet they would.””

“Listen, we’ve got the greatest league in ball,” Fisher said. “That’s the choices they make or what they do, I don’t know, but I don’t know how I feel about it.”

Saban's new deal worth at least $84.8 million over 8 years