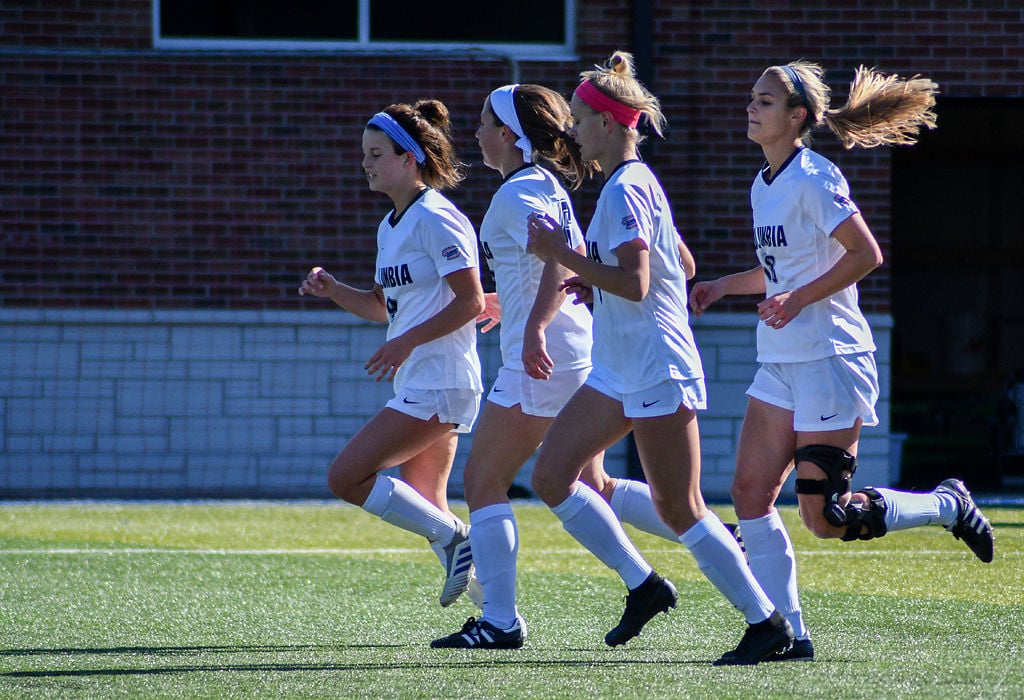 Columbia College’s (from left) Brooke Schneider, Lucy Kingsley, Jewel Morelan and Kelsey Mirts run towards the field during the game against William Baptist University on Nov. 2. 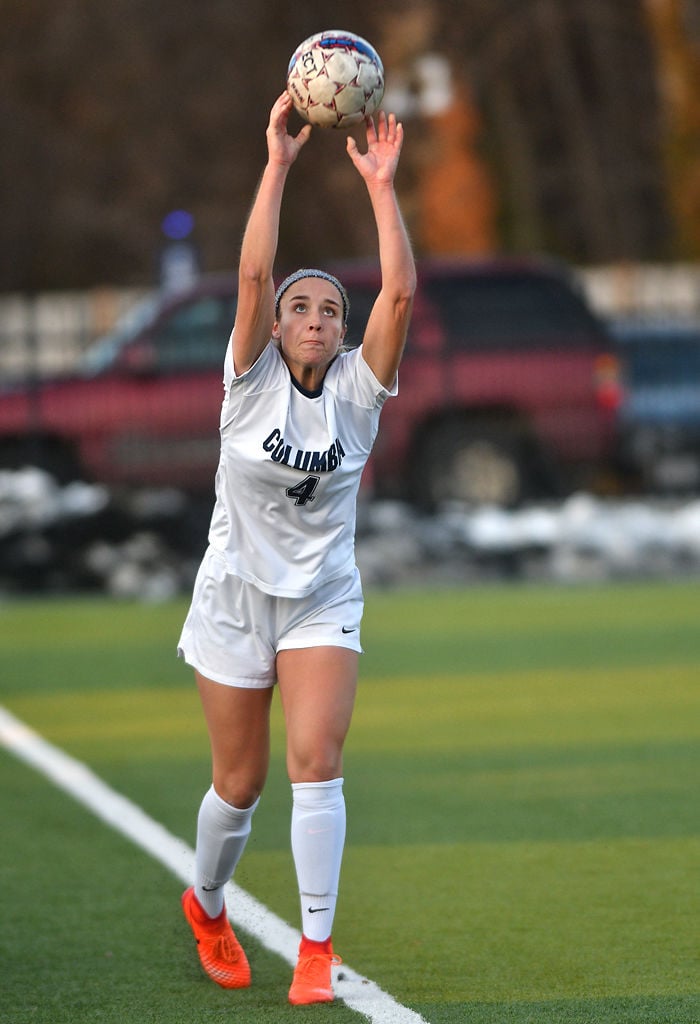 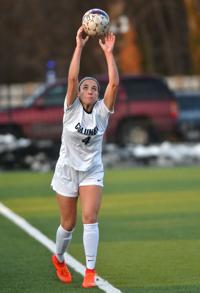 Columbia College defender Allison Floyd throws the ball in during the AMC Championship Finals against Missouri Baptist University on Nov. 14 at R. Marvin Owens Stadium. Floyd scored the final goal of the game and her first goal of the season.

Columbia College’s (from left) Brooke Schneider, Lucy Kingsley, Jewel Morelan and Kelsey Mirts run towards the field during the game against William Baptist University on Nov. 2.

Columbia College defender Allison Floyd throws the ball in during the AMC Championship Finals against Missouri Baptist University on Nov. 14 at R. Marvin Owens Stadium. Floyd scored the final goal of the game and her first goal of the season.

Columbia College soccer was and is a program built on finding and cultivating local talent.

With coach John Klein spending nearly two decades at the helm of Cougars soccer, he has left his footprint on the city of Columbia’s — and the state of Missouri’s — soccer scene for quite some time now.

He will coach the men’s and women’s teams this weekend in the NAIA National Tournament, both of which have concurrent berths for the fifth-consecutive year. But as the men’s team has a more even split of local to international athletes (13 Missourians to 11 foreign-born players), the women’s team is almost exclusively homegrown talent.

Twenty-one of the team’s 24 players hail from the Show-Me State, with another — Overland Park, Kansas, native Elisa Vega — mere minutes from the Missouri border. It’s a squad that certainly fits the recruiting tactics of Klein, who heavily scouts the Missouri prep soccer scene for talent year-round.

“That’s how we built this program ... on local girls, on regional girls, on Missouri state girls,” Klein said. “I think it has to be where you start. When you’re here in Columbia, this is your base, this is your foundation. We want the most competitive athletes in the area and in many respects, we were able to find them in this class.”

Whereas Klein has coached the men’s program since 2000, the women’s team at Columbia only started play in 2012, so he’s had to play catch-up against other, longer-running programs for female recruits.

The first year of the women’s program only had seven players who called Missouri home, as Klein dotted the roster with whatever talent he could get his hands on. But once his daughter, Molly Klein, committed to CC for the 2016 season along with fellow long-time Klein pupils Kelsey Mirts and Lucy Kingsley, he finally had a crew of Columbia-cultivated players he could coach collegiately.

Always lifelong friends and now currently seniors, Molly Klein, Mirts and Kingsley are one half of CC’s player contingent that played its prep ball at a Columbia high school, along with Allison and Megan Floyd (Rock Bridge) and Brianna Heath (Hickman).

Between the six, they’ve combined for 40 goals and 36 assists this season, which accounts for 41.7% of the Cougars’ total scoring. Mirts, with 21 goals and 12 assists, was named the American Midwest Conference Player of the Year just a year after Molly Klein (seven goals, 11 assists in 2019) did the same as a junior.

Kingsley and Allison Floyd have each started every game this year, while Heath and Megan Floyd both have reached double-digit appearances coming off of the bench. CC’s Columbia-bred cohort has been a pivotal piece in the Cougars’ school record 15-straight wins.

“I personally chose to come to Columbia College because I wasn’t ready for that step away from all those people in that support system,” Heath said. “And I think it’s helped contribute to my life. A lot of our success (comes from) having the encouragement from the sidelines. Because all of us are so local, we have a big crowd to most games.”

Having friends and family show up to games is definitely a positive, but the girls also said familiarity with each other from high school adds a level of chemistry that most teams can’t claim.

The seniors in the group go back even further than that. As they grew up, John Klein in his spare time coached his daughter, Mirts and Kingsley in a youth travel team, the Columbia Courage.

When high school came around, Molly Klein went to Rock Bridge while Mirts and Kingsley were teammates at Hickman. The trio didn’t just know how to play to their strengths as teammates, but also how to exploit their weaknesses as opponents.

“Chemistry-wise, all of us at one point have at one point played together or against each other,” Mirts said. “So we know like how we play, our styles and stuff. So that definitely helps a lot.”

John Klein said, as he’s recruited both men and women for several years now, he’s found that local female players are more eager to stay close to home than the men.

A couple of men from Columbia dot the current CC roster: Midfielder Nathan Durdle and backup goalkeeper Carson Linder were teammates at Rock Bridge. But it’s with women that Klein says he expects to find his biggest bunch of locals.

“I think overall, females are more prone to staying close to home,” Klein said. “Certainly Kelsey, Lucy (and) Molly ... they have a strong attachment to their families and the group, they always wanted to stay together. But yeah, I think there is a comfort level when you’re playing at home, when you know it’s a program that’s at a competitive level that satisfies all their needs.”

Columbia College plays Taylor (Ind.) at 1 p.m. Friday in the Pulaski, Tennessee, regional of the opening round of the NAIA National Tournament. If CC wins, they earn the right to play at 1 p.m. Saturday against fifth-seeded hosts, Martin Methodist, in what could be an exciting rematch. The Redhawks defeated the Cougars 2-0 in Columbia on Aug. 23, each team’s season-opener.

CC won 1-0 against the Trojans in 2017, so there is some recent history between Taylor and the seniors. A shot at redemption against Martin Methodist being on the table, though, makes this draw especially exciting.

“(Taylor) is a new team, just like we are, so I think we’re probably going to watch film at some point,” Molly Klein said. “We played Martin Methodist, that was a close game. So I think we got a good draw.”

Japan's champion: Matsuyama wins the Masters for his nation