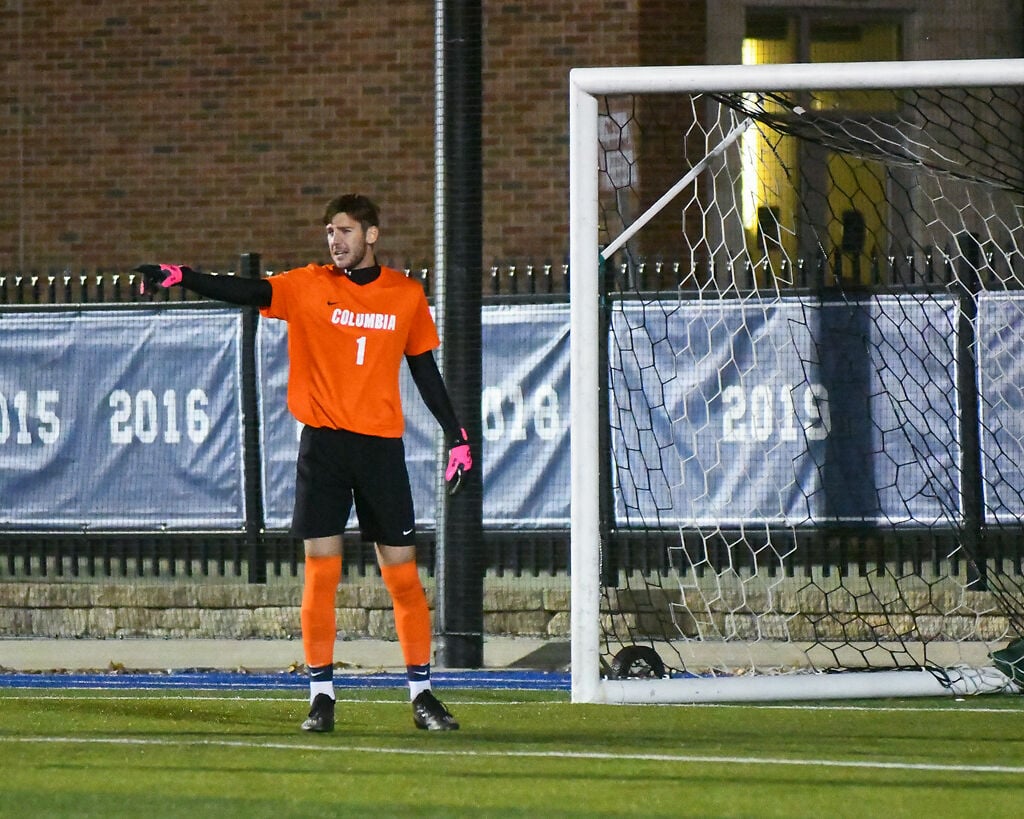 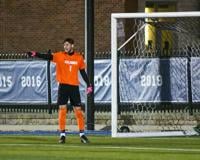 Columbia College goalkeeper Liam Gibbs directs his team after a shot on goal Oct. 14 in Columbia. Gibbs, who is from Middlesbrough, England, has turned into the Cougars’ backbone between the posts. 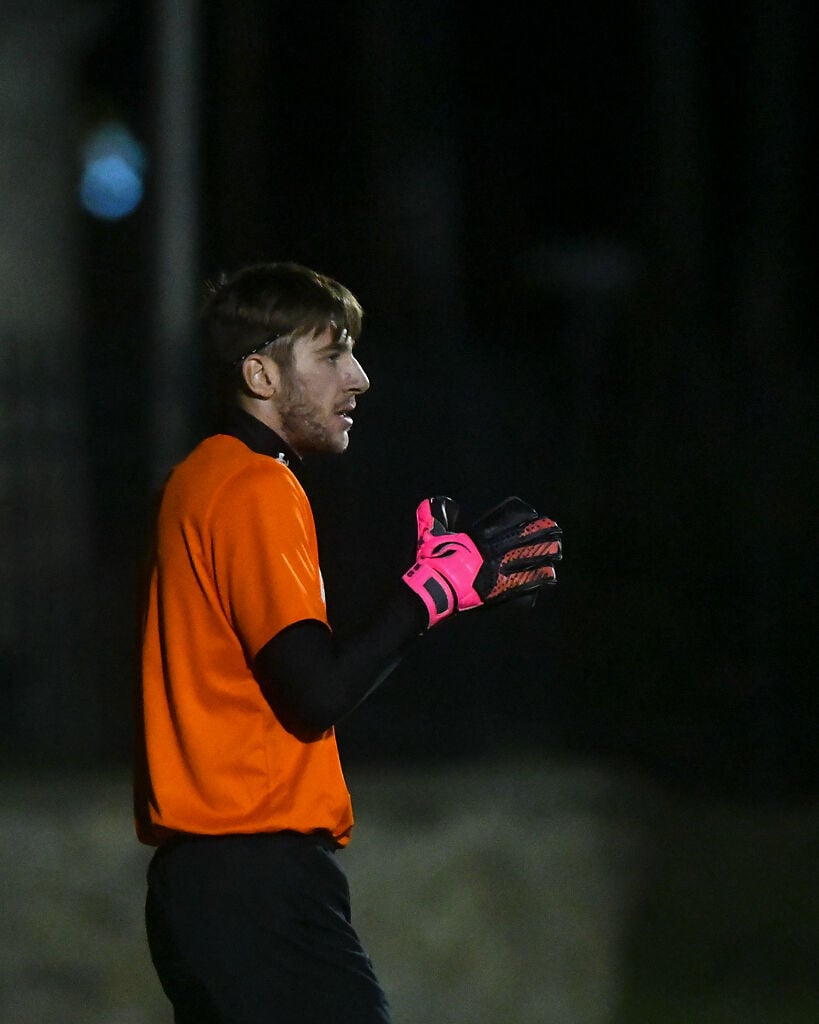 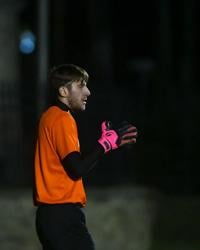 Columbia College goalkeeper Liam Gibbs in action on Wednesday against Missouri Valley College in Columbia. Gibbs has allowed just three goals in seven games in his first year as a Cougar.

Columbia College goalkeeper Liam Gibbs directs his team after a shot on goal Oct. 14 in Columbia. Gibbs, who is from Middlesbrough, England, has turned into the Cougars’ backbone between the posts.

Columbia College goalkeeper Liam Gibbs in action on Wednesday against Missouri Valley College in Columbia. Gibbs has allowed just three goals in seven games in his first year as a Cougar.

The women’s soccer game between Columbia College and Missouri Baptist University had started close to 90 minutes earlier, at 4:30 p.m., Oct. 10. As the time on the scoreboard ticked closer to zero, the sunny afternoon began to give way to evening with the men’s kickoff at 7 growing nearer.

The sun sat nearly eye level in the sky as the ball rolled out of bounds on the west sideline. An orange-clad referee squinted from midway across the pitch, trying to see through the aggressive blinding light which team was the last to touch it. The official called out to his partner, asking for help determining the relatively inconsequential play.

“It’s okay, ref,” came a sarcastic but good-natured voice from the stands. “It’s sunny out.”

Men’s goalkeeper Liam Gibbs sat in his usual pregame spot in the bleachers, his lanky 6-foot-5 frame stretched over two rows. The remark drew a few laughs from teammates gathered around him waiting for their game to start.

The action on the pitch continued and Gibbs quickly moved onto his next victim, offering some teammates headbands just in case they needed to keep their buzzed hair out of their eyes during the game.

“Lindsey, I can’t take you seriously with those glasses on,” Gibbs told the all-conference defender.

No one is safe from Gibbs’ ribbing. It’s part of how he likes to keep things loose within the team.

Then the match kicks off.

The sun has now almost completely disappeared below the horizon and the goofy, sarcastic Gibbs is gone. He yells at teammates and officials. If an opponent gets too close to him in the box, he might send them back out with a push. The pregame was pleasure. This is business.

“Once the game starts, I flip a switch and I get into serious mode,” Gibbs said. “My teammates are my really good friends off the field, but as soon as we get onto the field, I’m not scared to shout at them. Sometimes, they do something wrong, I have to let them know that they’re doing it wrong and that they have to put it right.”

That approach has Columbia winners of its last six matches in the first half of this strange season split between the fall and spring. Gibbs is the two-time defending American Midwest Conference Defensive Player of the Week and has allowed three goals in seven games in his first year as a Cougar.

His collegiate career began two hours east on I-70 from Columbia at St. Louis Community College. Gibbs grew up in Middlebrough, England, and there’s a natural early culture shock for most international students at the college. St. Louis assistant coach Matt McVey has seen it every year of his 28-year tenure.

“The thing that is most memorable or striking is when they get here and they are just totally overwhelmed by the culture clash,” he said. “The weather, it’s hot, it’s humid and they don’t have that back in the U.K. It’s funny to see how long it takes to adjust and deal with the weather and the culture, and then you get the classes and things like that.”

“I was really excited, so I feel like the adjustment was really natural,” he said. “I didn’t have to push myself to adjust. I kinda felt right at home straight away. A lot of the guys on the team in St. Louis were English guys.

“I felt good about moving here. I didn’t feel like I was out of my depth.”

St. Louis had lost a handful of contributors from the year before, and 2018 was expected to be a rebuilding year with Gibbs penciled in as the primary goalkeeper. He started 16 games.

Buoyed by a hot start and ending the season by — in the words of former St. Louis defender Alexis Reyes — “beat(ing) some teams that were better than us,” the Archers made it to the NJCAA Championships before falling in pool play.

Gibbs developed a reputation as one of the team’s leaders on and off the field, in completely different ways.

“We’d be in the locker room,” Reyes said. “We’d all be focused, and then all of a sudden he’d stand up and start dancing, put on a show. And then we loosened up.”

The field, of course, was no place for dancing. The goalkeeper has a unique perspective on the pitch as the only player with everything unfolding in front of him. He has to be communicative and make sure his teammates know the whereabouts of opponents at all times. Gibbs was never afraid to make his voice heard.

“I’m always going into a game knowing that I’m an important figure,” he said. “So I have to do my best to be a leader and organize my team from that perspective.”

Gibbs’ friend and former St. Louis forward Kieran Campbell declined to be interviewed, but detailed in an Instagram direct message a story of Gibbs catching a baby thrown from a burning building in downtown St. Louis before running several yards and drop-kicking it.

The Missourian was unable to confirm Campbell’s report.

Columbia College emerged as a nice fit for Gibbs as his junior college career came to a close. He had spent much of the past two years in St. Louis, both in college and with the St. Louis Lions club team in the summer, so staying in Missouri offered a chance to retain some normalcy.

Adding to that familiarity was the fact that Columbia captain Charles Norman had overlapped one year with Gibbs in St. Louis. Gibbs paid attention to the Cougars in 2019 and knew they would be a good fit as they stormed through the AMC in an undefeated regular season.

“I’d seen that they’d made the semifinals, the National Championships, and that appealed to me,” he said. “I knew that off the back of that they were gonna recruit some good players, so I knew that if I wanted to come to a college, play soccer, get a good scholarship and push for a national championship, then Columbia would be the perfect place.”

He had the chance to immediately compete for the starting spot vacated by the graduated Ryan Harriskitt in 2019. The talkative Hartlepool, England, native had been an All-American his senior season. Practice was limited leading up to the 2020 season, but it didn’t take the Cougar defenders long to notice Gibbs’ similar traits.

Goalkeepers directing traffic is nothing out of the ordinary, but making Gibbs seem quiet is no easy task. The veterans on the back line like Thetsane are used to having a chatterbox in the goalie box, and Gibbs isn’t one to let his status as a newcomer change his demeanor in the net.

“You need your keeper to talk, and I think he likes to talk,” Columbia coach John Klein said. “He wants to be involved there. He wants to organize. It can be more positive, and it can be more encouraging, but that’s it. He’s got that in him.”

The fire Gibbs plays with occasionally gets him in trouble; he picked up a yellow card earlier this year against Missouri Valley College when he retaliated an elbow in the box with a hard shove on a Viking forward. Columbia ended up winning that game, and after the final whistle Gibbs was back to his off-field persona.

“What I try to do is interact with everyone, make sure everyone is comfortable with me, so that when we do have a bit of fun it’s not too serious,” he said. “And that just lifts everyone’s spirits, so they know they’re comfortable with me as a person and on the field as well. They know they can talk to me. They can shout at me and I won’t take it personally. It’s just about having that good personal relationship.”