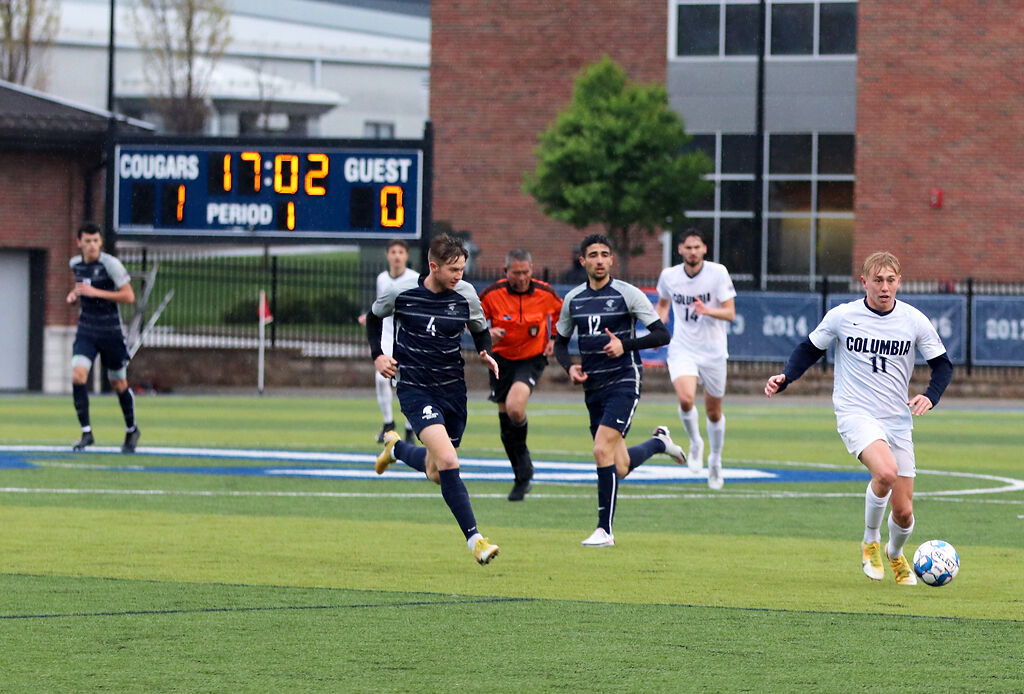 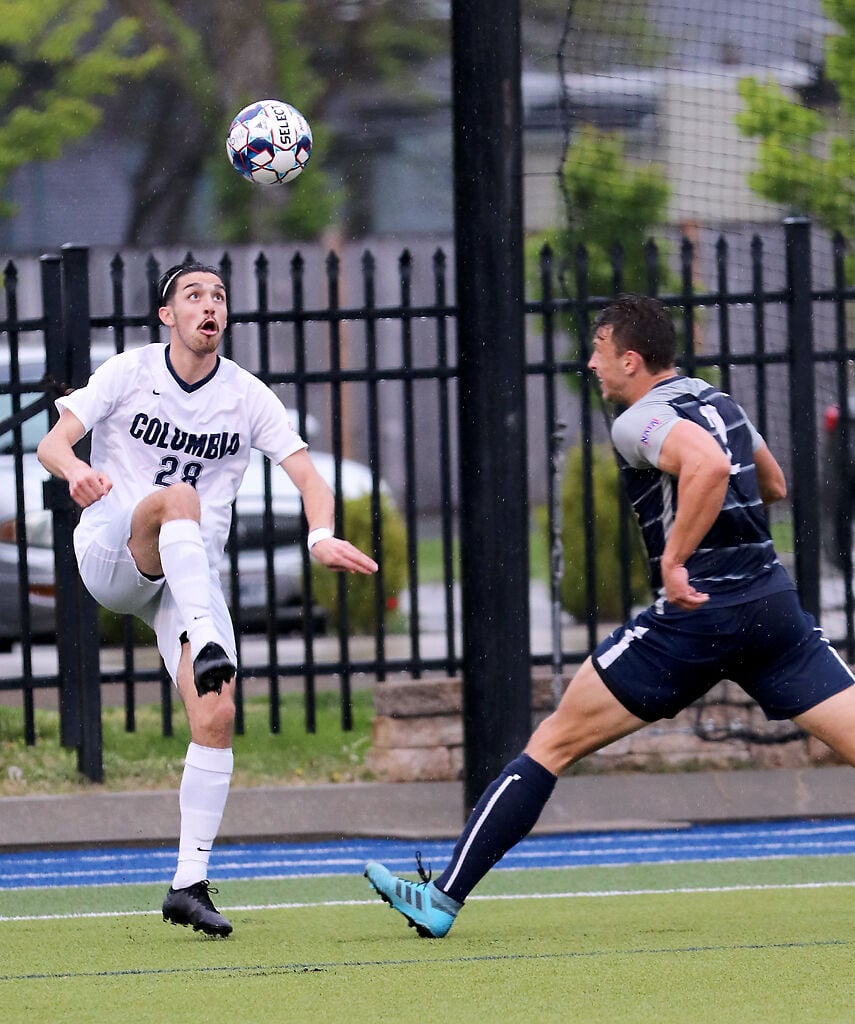 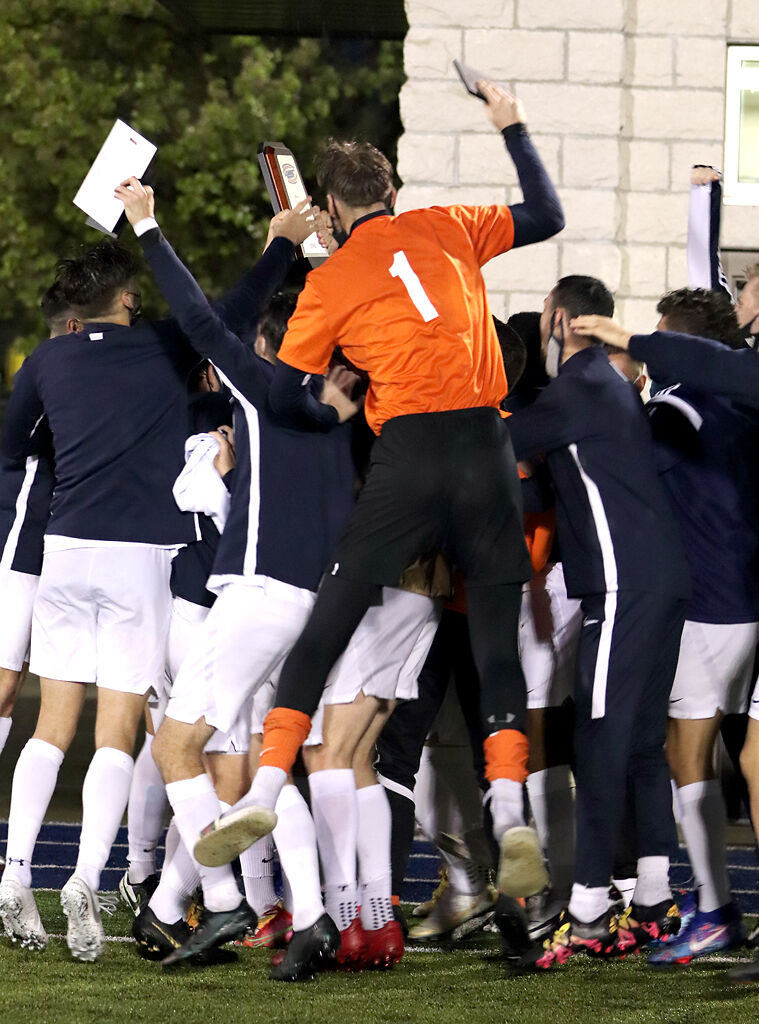 Members of the Columbia College men's soccer team huddles around each other after receiving their awards on Friday at R. Marvin Owens Field in Columbia. This marks Columbia's 11th victory in the AMC Tournament. 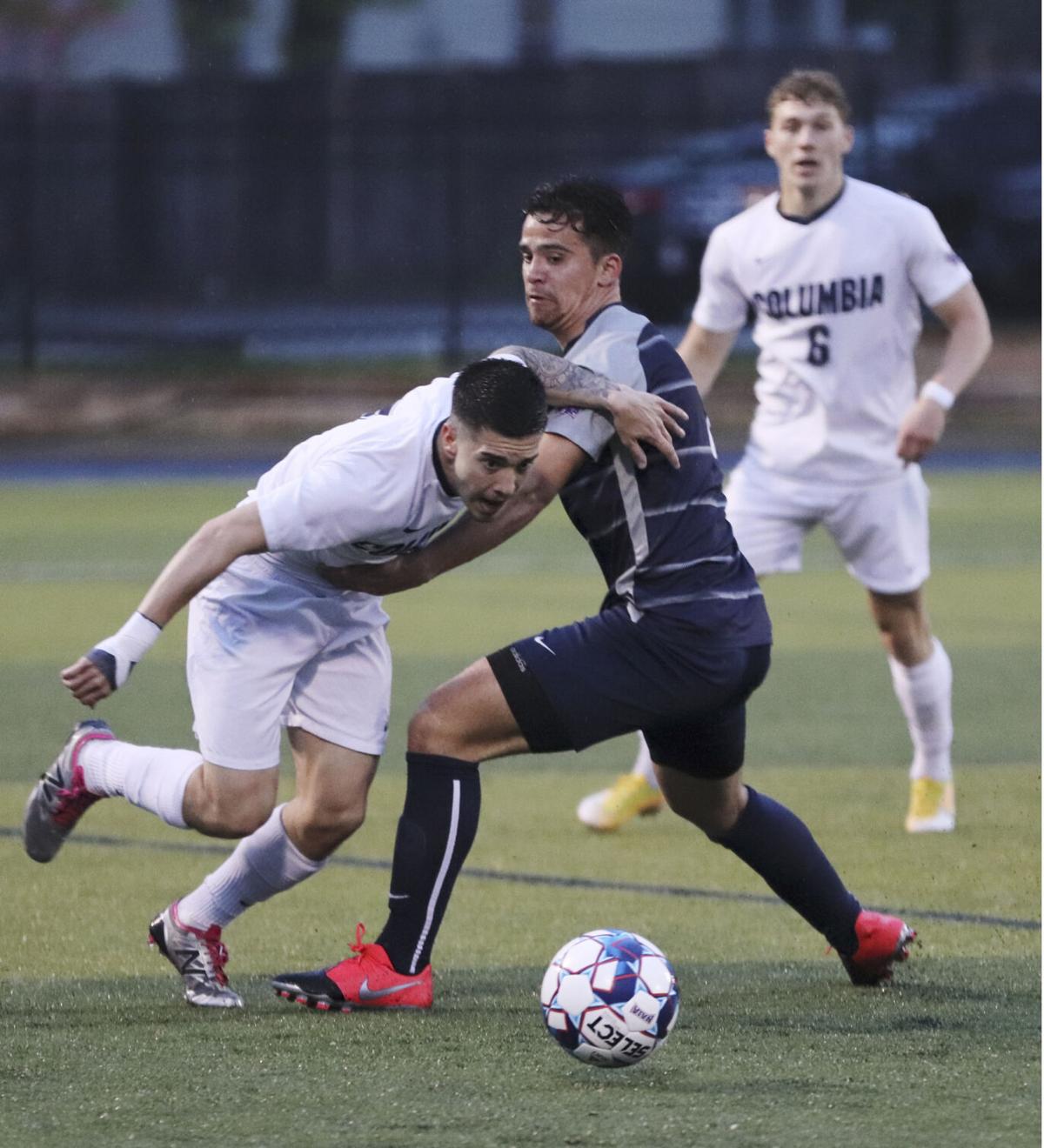 Members of the Columbia College men's soccer team huddles around each other after receiving their awards on Friday at R. Marvin Owens Field in Columbia. This marks Columbia's 11th victory in the AMC Tournament.

A one-goal lead is as precarious as it comes, unless you’re Columbia College men’s soccer.

The Cougars had already successfully defended two of them to the final whistle in the postseason — in the quarterfinals against William Woods and in the semifinal against Williams Baptist — en route to the American Midwest Conference championship game against Missouri Baptist. And they would have to do it again.

Parker Moon gave Columbia the lead in the 17th minute with a fierce right-footed strike into the bottom-right corner from 12 yards out giving Spartans goalkeeper Wessel Berenschot little hope of making a save. Despite a full 90 minutes of intense pressure that seldom saw the ball leave the final third in Missouri Baptist’s half, the Cougars had to protect that slender advantage all the way until the end.

But the Cougars’ defense is as unscalable a wall as there is in the division.

Columbia held on to the lead and defeated Missouri Baptist 1-0 in the AMC title game to claim its 11th postseason championship Friday at R. Marvin Owens Field in Columbia.

“I thought we were in total control,” Columbia coach John Klein said. “I thought the effort was national-championship effort.”

Led by AMC Player of the Year Carson Lindsey, the Cougars never gave up that total control.

“We had a chat in the locker room at halftime, and we really wanted to get three, four and really make a statement to everybody in the NAIA,” Lindsey said. “But we won the game — that’s all — got the shutout, couldn’t really ask for more. Very proud of the team.”

Goalkeeper Liam Gibbs had the quietest night. He was forced into just one save in the game with the ball at the other end of the field for the majority of the match.

“Excellent, they’ve (the defense) been excellent all year,” Gibbs said. “That was our eighth shutout in 15 games. One of the best in the NAIA right now. Carson Lindsey deserved to get player of the year, we’ve got a couple of first-team all-conference in there as well. These lads have been excellent all year and again tonight.”

The defensive dominance is no surprise. It has been a recurring theme throughout the Cougars’ postseason and the entirety of their season.

Columbia has shutout three opponents in its five games this spring. The only goal it conceded in the postseason, in a 2-1 win over William Woods, came via one of the Owls’ two shots on goal in 90 minutes.

“They (the defense) are spectacular back there,” Klein said. “I mean, you’re not gonna beat them in the air. Carson Lindsey and Aaron Fernandez in the air, Caden (Castello) and Charlie (Norman) on the ground.

“It’s just really a solid back line. That’s where we always start. We always think defensive shape first, and how do we keep the ball out of the net.”

But defense alone doesn’t get the job done. The Cougars still had to put away one of the 13 shots they took in the contest.

Moon was the man to make it happen.

Nathan Durdle collected the ball on the right wing for the Cougars in the 17th minute, made it past the challenge of a Spartans defender and then picked out Moon at the far post. Moon’s touch set the ball a couple of yards in front of him, more than six yards away from the nearest opposition player, and he drilled a shot low and back across the goal frame.

It was out of Berenschot’s reach and buried into the bottom-right corner of the net. The Cougars had the lead and never gave it up.

“For me, it means a lot,” Moon said. “I’ve been on and off, I’ve been injured, so coming in, that felt really good. We pressured them right off the bat for the first 15 minutes, so for us to get the goal early on was really important.”

Columbia had plenty of chances to seal the game. Missouri Baptist was having a hard enough time creating one scoring opportunity that a second goal would have all but iced the contest. But the Cougars never managed to find that breathing room.

Durdle was again involved in two of Columbia’s opportunities after halftime as he received a diagonal ball from Erik Rajoy on the right wing and then found Antonio Aranda in the box with a cross, but from near the penalty spot Aranda hit it over the bar.

Moments later, Durdle broke free at the back-right post, but his shot from a tight angle sailed inches wide of the left post. Maclain Petri and Victor Quintas Bastos would also see opportunities, but nothing would go.

With the NAIA National Championship opening round looming, Klein anticipates a game where the chances fall in Columbia’s favor.

“One goal wins a game with a shutout,” Klein said. “It’s kinda been the way it’s gone. I kind of feel like we’re due to open one up and put three, or four or five in the net.”

LeBron vs. Steph: A play-in game will be a superstar tussle