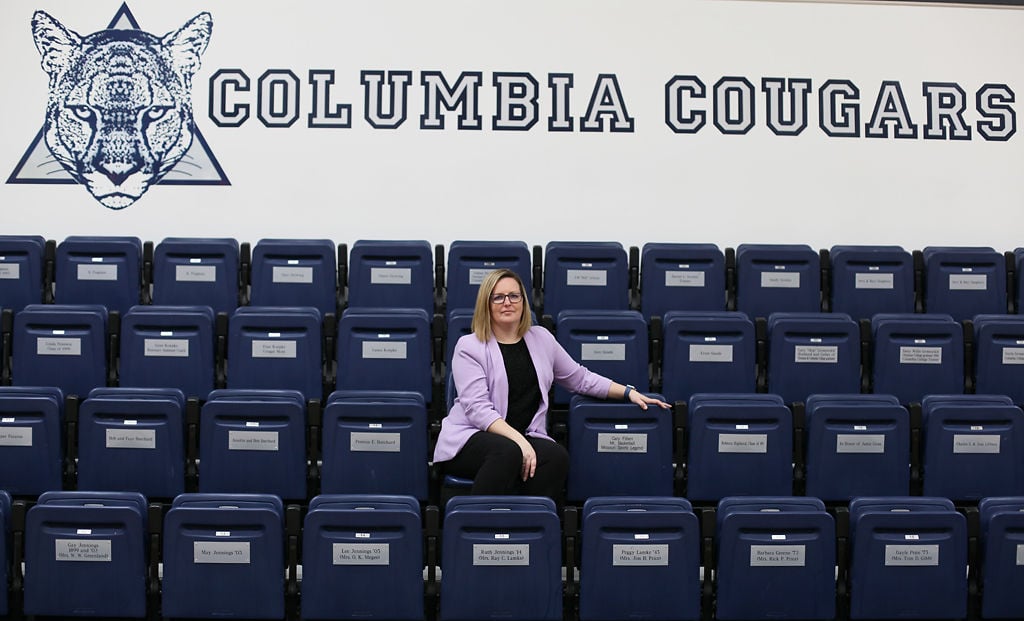 Cindy Potter, the interim athletic director for Columbia College, is photographed in the Columbia College basketball gym. Potter is only the fifth woman to serve on the board of directors of the College Sports Information Directors of America in the organization’s 61-year history. 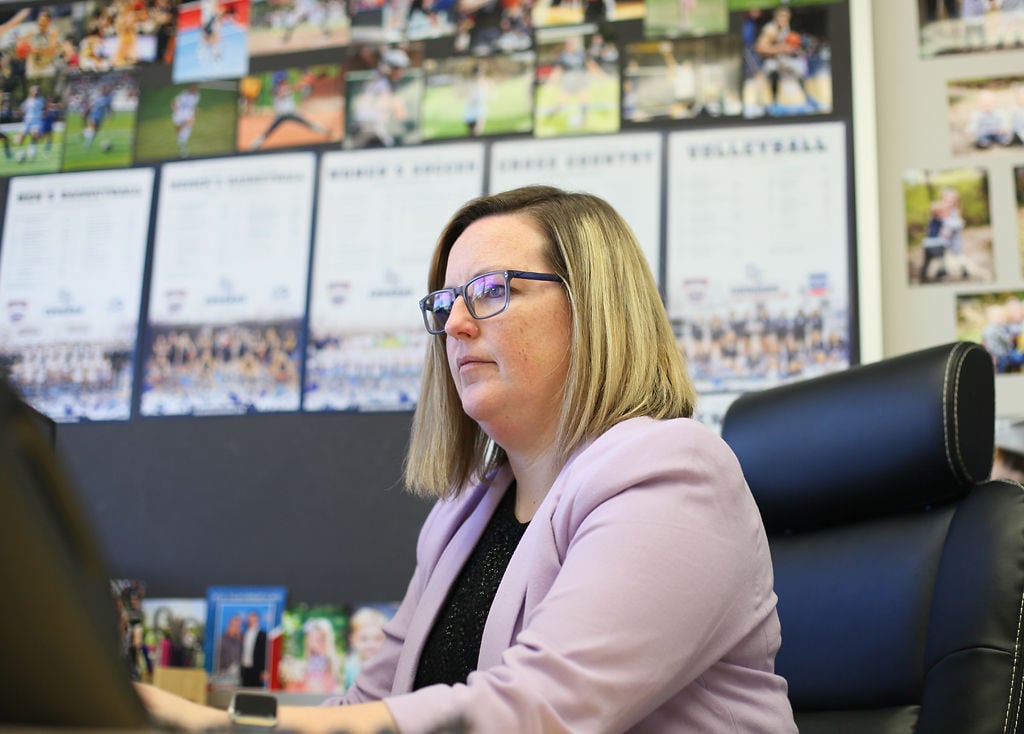 Cindy Potter, the interim athletic director for Columbia College, is photographed in the Columbia College basketball gym. Potter is only the fifth woman to serve on the board of directors of the College Sports Information Directors of America in the organization’s 61-year history.

With a camera in her hand and her daughter chewing on licorice in her lap, Cindy Potter sat watching the Columbia College baseball team play a doubleheader on a Saturday afternoon at Atkins Park. She’d snap photos of the action, observe the game for the postgame recap and bounce Caitlynn Jae on her knee.

A working mom of two, Potter is in her 17th year at Columbia College. She recently stepped into former athletic director Bob Burchard’s shoes, taking on the role of interim athletic director after his retirement. Before taking the position in March, she was working as associate athletic director for media relations and compliance, a role she still fills.

The longer her title has gotten, the more rooted she has become in Cougars athletics. Potter said she cried when Burchard offered her her first full-time position at Columbia. She had gone from Columbia softball player to student assistant to graduate assistant, and her work was being rewarded with a full-time job.

In 2018, Potter was elected to serve as the third vice president of College Sports Information Directors of America, meaning she’ll eventually rotate into the role of president. She’s the first NAIA representative to do so and will be just the fifth woman in 61 years to serve as president.

Potter, originally from Winnipeg, Manitoba, spoke to the Missourian about her career at Columbia, life as a working mom and the changing roles of women in athletics.

This interview has been edited for length and clarity.

How did you get from Canada to Columbia?

“(I was playing) softball in the summer of 2000. I’d just graduated from high school, and up in Winnipeg, where I’m from, you only play in the summer. There wasn’t any high school ball. We were competing against a team and I knew the pitcher. Her dad asked my dad, ‘What’s Cindy planning on doing?’ He ended up talking to my dad about the fact that his daughter had just come down to Poplar Bluff, Missouri, to go to Three Rivers, a community college (that) was always looking for players, and would I be interested?

“So we called and talked to the coach and said, ‘We want to come for a visit and see what this is about.’ They had volleyball, basketball and softball for females at Three Rivers. He had me try out for all three, and they offered me a scholarship on the spot. We literally drove from Winnipeg down to Poplar Bluff, which is a ridiculous drive. (I) tried out, toured the place and then left the next morning and drove back. That following weekend, we packed up and drove back down. My parents spent a couple days there moving me in and everything, and then they left. I spent some time just crying and crying in my apartment and going, What did I just do?’

“Fast forward two years later, I was actually playing our softball regional tournament for Three Rivers on the Columbia College softball field. After the game, we’d just lost, I was devastated. I didn’t even know we were on a college campus. You just don’t pay attention to that stuff. (Columbia College softball coach) Wendy Spratt approached me and asked me, ‘Hey, would you be interested in coming for a visit?’ I had visited a couple other schools, but I came here, and as my dad and I were leaving, I said, ‘This is where I want to be.’ And so, that’s how I ended up at Columbia. Seventeen years later, I’m still here.”

What’s kept you at Columbia?

“Really, the people. I go back to my wedding. We got married here and had a lot of people at the wedding. The room was filled with Cougar Club members and Columbia College people because those have become my family. So really, it’s the people that have kept me here. Not just Columbia College faculty and staff, but our Cougar Club members and our people in the community that have just made me feel like part of their family when my nearest family member’s a thousand miles away.

“I think when you play for an institution, you just have an affinity for it. It’s really hard for me to think about supporting another institution in this way. And yeah, I like my job. Who doesn’t like to get paid to work sporting events? It’s just fun.”

“I think back when I played, the biggest challenge for us wasn’t really about an equity thing. It was, for us, just getting noticed and being recognized as a good athlete, even though we were females. Back when I played, we didn’t have very many student-athletes. There were only 70 of us on campus any given year. So you put yourself out there as like, ‘I’m one of the student-athletes, a female student-athlete, at this institution.’ And showing people that, ‘OK, I’m strong, and I’m smart, and I can do this.’ I think that was our biggest challenge.

“Now, I feel like it’s totally changed (with social media). About two years after I finished up playing is when Facebook really hit. I am so excited that I was not part of that. I think, 100 percent, the social media side of it and the pressure that young people in general, but especially student-athletes at the college level, are put under, it’s really hard. I didn’t have those struggles, because it just wasn’t around. That’s a real struggle now, and I don’t envy them at all for having to go through that.”

What about in terms of job opportunities? How have you seen changes in opportunities for women working in sports?

“I don’t think that, as a student-athlete, I thought that much about it. I definitely thought about my coaches. When I came here, this was my first female coach that was just very strong, opinionated, almost intimidating at times. My mom coached me in T-ball, but that’s different. In softball, that was my first strong female coach, and I saw her as like, ‘Wow, OK, so she’s able to do this. She had an awesome playing career, and now she’s able to, you know, lead a college team to success. It doesn’t take a man to do that.’ That was really influential to me.

“As a college (administrator), I wasn’t thinking about that. I think it took me quite a few years to really think about gender. I would not consider myself somebody who is like, ‘Yes, go women,’ all the time. I’ve been our senior women’s administrator for 15 years, but I hate that title. You don’t have a senior men’s administrator. It’s basically saying, ‘We’re going to create a position that everybody’s going to have to hire a female for.’ It doesn’t make sense to me.

“I think that it took me a long time to even grasp the fact that there’s not a lot of females in my profession or in college athletics as a whole. I go to the (College Sports Information Directors of America) convention and definitely hang out with quite a few females when I go to convention, but the majority of them are men, and I don’t see that as a bad thing. I just think men have chosen this profession and women may not choose this profession. That’s not anybody’s fault.

You mentioned the CoSIDA convention. Can you tell me about the organization and your leadership role there?

“When I was a graduate assistant, (Bob) encouraged me, like, ‘Why don’t you get engaged, go to (the) convention?’ And I thought, ‘OK, cool. A free trip to Nashville. Sounds good.’ So I went there, met so many people, did everything I could to just network with people and thought, ‘This is a lot of fun.’

“I’m in year 11 or 12 of being on the NAIA-SIDA board. I just have really loved being in the know and having a seat at the table. This was my third year putting myself out there to be an officer on the (CoSIDA board of directors) rotation. I didn’t think it would ever happen because, to be completely honest, a lot of the issues that go on and that we talk about and that affect our members are NCAA issues. Why put somebody that’s involved in the NAIA in that role? But I think they saw the value of that for the membership and small colleges. And so being a female and being NAIA was definitely a bonus because I thought, ‘That gives me a better shot to be in this position.’ And it didn’t for two years. Third time’s the charm.

“I have loved every minute of my CoSIDA journey, and I don’t know that I would still be here — I definitely would not be in this role — had I not gotten involved in CoSIDA.”

“That’s probably my toughest job. I never envisioned this growing up, but working here early on, before I met my husband, I thought, ‘This is the perfect position to raise a family.’ I get to come to games, and I can bring the kids, and they can see college student-athletes working hard and working to get a degree and working to win games. How cool is that?

“In a cliché way, I’m living the dream right now because my kids are really heavily involved. They know where Mommy’s office is, and they think they run the gym sometimes because they just go wherever they want. It’s been a challenge because when I’m here, and they’re here, I have to say, ‘No, Mommy’s got to work,’ and push them away. That’s hard, but I also really want them to see me doing that. If my kids are watching me work hard, I think I’ve done my job.”

Bet the over? Chiefs, Washington face off with bad defenses