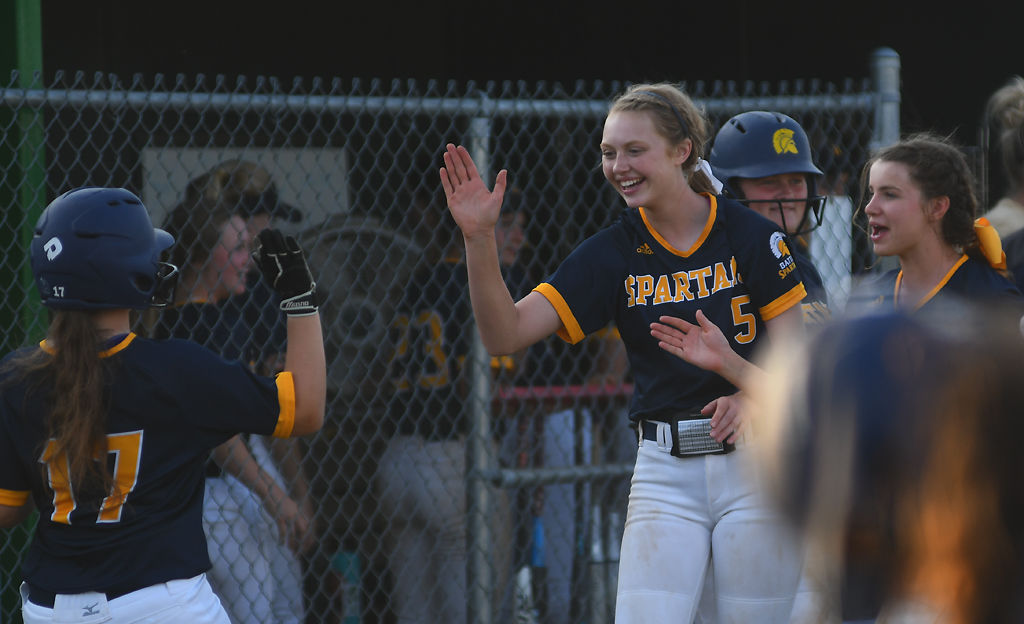 Libby Stiles is greeted by Mya McCubbin and Eliyah McCarthy during a 12-2 loss to Mexico on Sept. 7. Battle softball has been conducting workouts over videoconference in order to stay in shape. 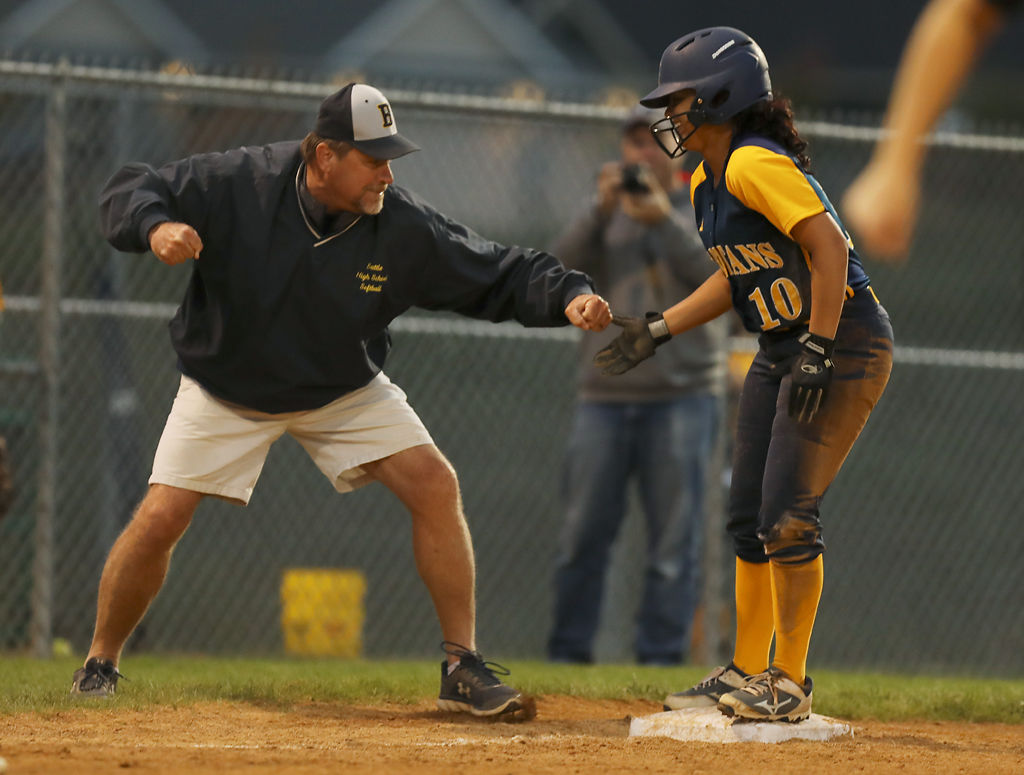 Battle head coach Joe Henderson, who has his players working out together in Zoom sessions during the coronavirus-related school shutdown, congratulates junior Eliah Kemp after Kemp's triple in a 2018 game.

Libby Stiles is greeted by Mya McCubbin and Eliyah McCarthy during a 12-2 loss to Mexico on Sept. 7. Battle softball has been conducting workouts over videoconference in order to stay in shape.

Battle head coach Joe Henderson, who has his players working out together in Zoom sessions during the coronavirus-related school shutdown, congratulates junior Eliah Kemp after Kemp's triple in a 2018 game.

Much of the focus in the world of sports has been on how teams currently in season are being affected by the COVID-19 pandemic, which has caused mass cancellations and postponements.

But what about sports currently in the midst of their offseasons? With schools and gyms closed and practices canceled, how can teams continue to get better and still utilize social distancing?

Battle softball coach Joe Henderson recently came up with an answer. He noticed that many teachers were switching over to the videoconferencing program Zoom for their classes, and figured he would try the same thing.

“We have very good team chemistry,” Henderson said. “And I’ve been trying to keep that and I thought, I’ve got to find a way. So we called Zoom and set up our own account so I was able to communicate with the girls for longer than 40 minutes at a time.”

Originally, Henderson was just using the Zoom meetings to let the players talk face to face. The team has an active GroupMe chat where they communicate constantly and this was a natural extension for the close-knit group, allowing them to see their teammates from a safe distance.

Earlier this week, Battle assistant coach Sammie Symonds got the idea to go from simple Zoom calls to group workouts. Symonds was inspired by her gym, CrossFit CoMo, which had already begun doing Zoom workouts amidst the lockdown.

“I thought about the preseason conditioning workouts that we would be doing during the week right now,” Symonds said. “I figured that I could just write workouts for the girls that would help keep them in shape and Zoom would keep them kind of all together as a team.”

During the Zoom workouts, the team does primarily body-weight exercises because the girls don’t all have access to dumbbells or kettlebells in their homes. After the team’s first Zoom workout, the girls ended the call and ran for 10 minutes for more conditioning.

“They got a good workout. In fact, some of them said it was a little too hard,” Henderson said.

The team had only one girl out of 20 who was unaccounted for during the first workout, an encouraging sign.

“That just speaks to who they are. They’re just a fun, good group who really wants to win and enjoy each other’s company,” Henderson said.

The team had been working out three days a week prior to all Columbia Public Schools closing on March 18. Since they have more free time now with school out, the team voted to increase its workouts to four a week.

In a typical season, all of Battle’s softball players would play travel softball in the spring and summer. But with COVID-19 making tournaments impossible at the moment, Henderson has encouraged the players to throw and hit with their parents or siblings as much as they can to work on their softball fundamentals.

Henderson credits the team’s four captains — Mya McCubbin, Eliyah McCarthy, Kalea Baker and Brooke Nutter — as well as junior Journey Polacek with keeping the team together while it can’t practice.

Outside of the physical workouts, Henderson is starting a leadership class that will meet for two hours a week starting next week. In the class, the players will talk about what it means to be a leader or captain, both on and off the field.

Battle softball’s summer starts when school gets out on May 27. The players are hoping they are clear to practice by then but for now, they’re just trying to make the best of the situation.

“We’re just trying to do everything to have business as usual, unusually,” Henderson said.

'We're still here. We care': How K-12 teachers are connecting with students

From TikTok to morning announcements to spirit days, Columbia teachers continue to build relationships with students.