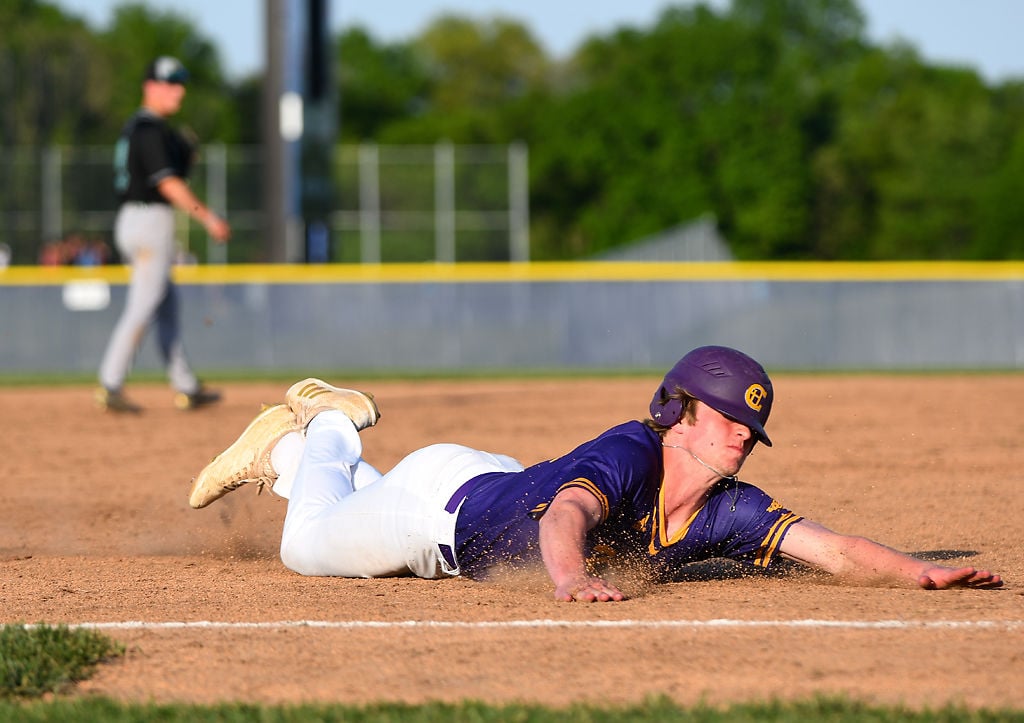 Hickman outfielder Gage Slaughter slides into third base during Wednesday's game against Rock Bridge at Battle High School. The teams faced off in the Class 5 District 8 championship, which Rock Bridge won 5-0. 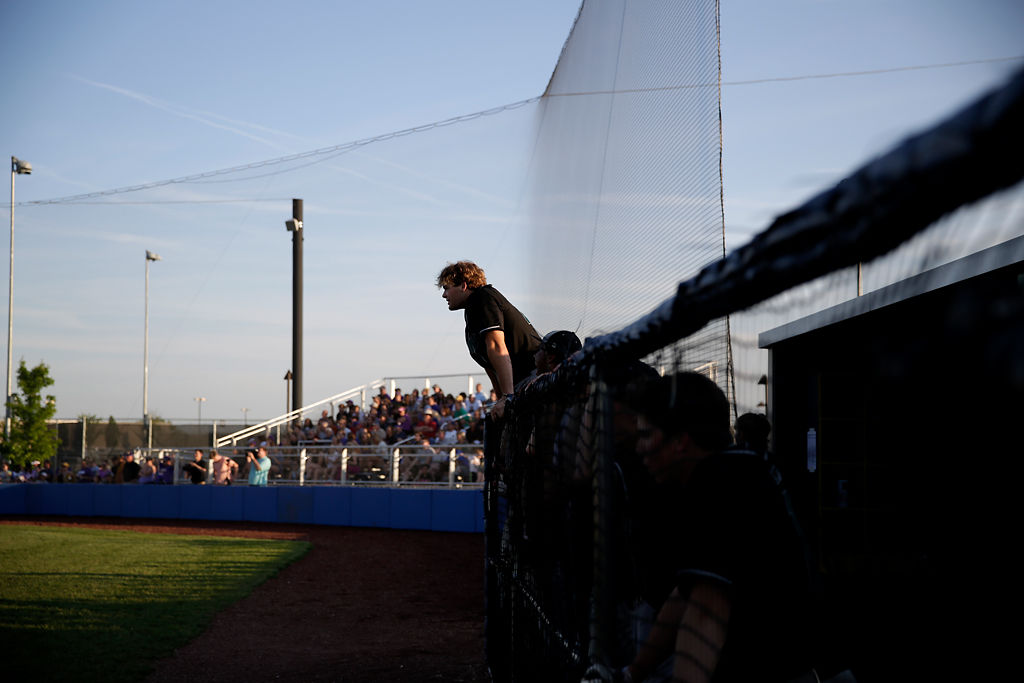 Junior Will Norris cheers on his teammate from the Rock Bridge dugout during Wednesday's game against Hickman at Battle. The Bruins beat the Kewpies to advance to Tuesday's sectionals against Francis Howell. 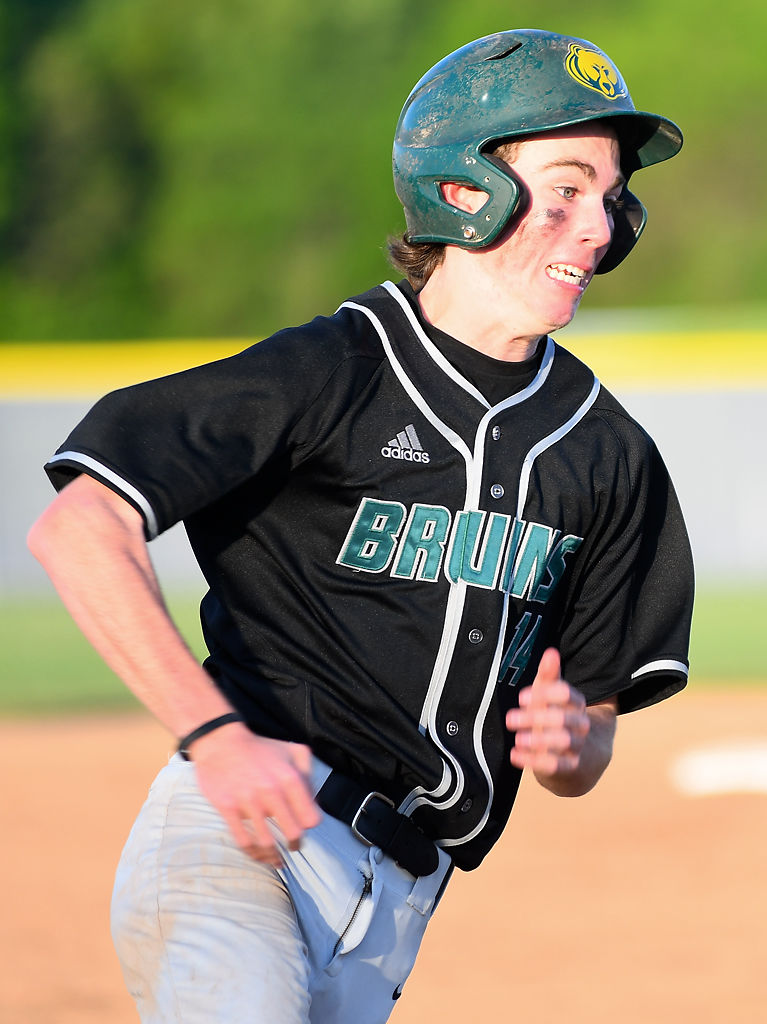 Elliot Bachrach rounds third base and races toward home plate during Wednesday's district final between Rock Bridge and Hickman on Wednesday at Battle. This was the 99th edition of the crosstown rivalry. 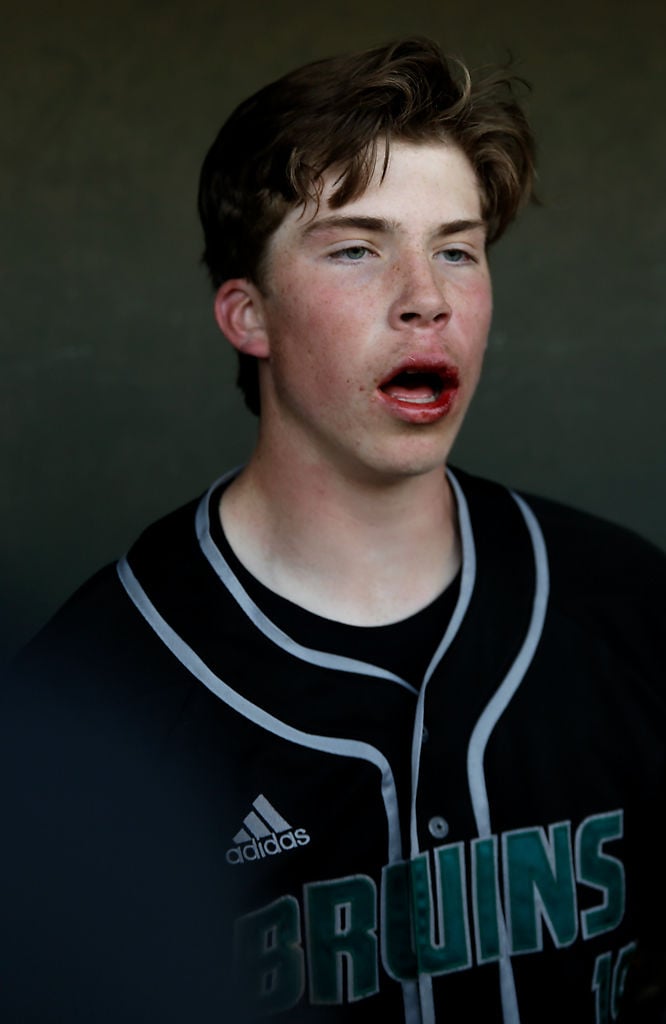 Rock Bridge infielder and pitcher Travis Bassford sits in the Rock Bridge dugout with a bloody lip during Wednesday's district final against Hickman at Battle. Bassford was hit in the face with a ball while at bat. 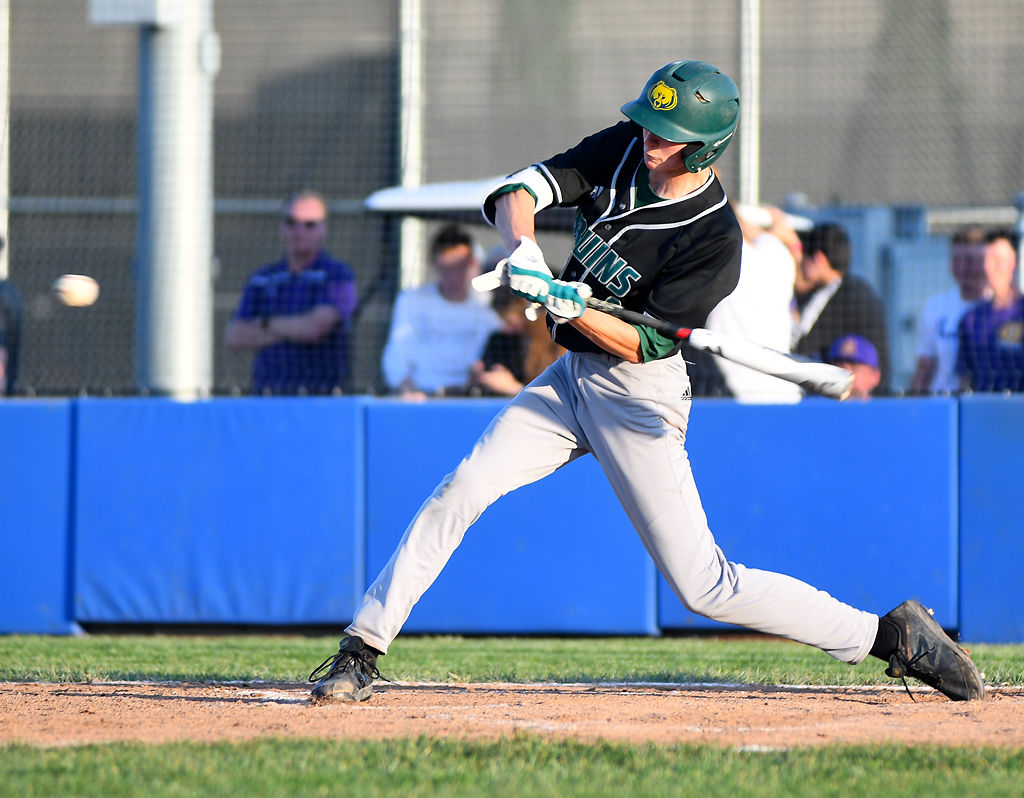 Spencer Miles takes a swing at a pitch during Wednesday's district final against Hickman at Battle. Miles is a senior infielder for the Bruins. 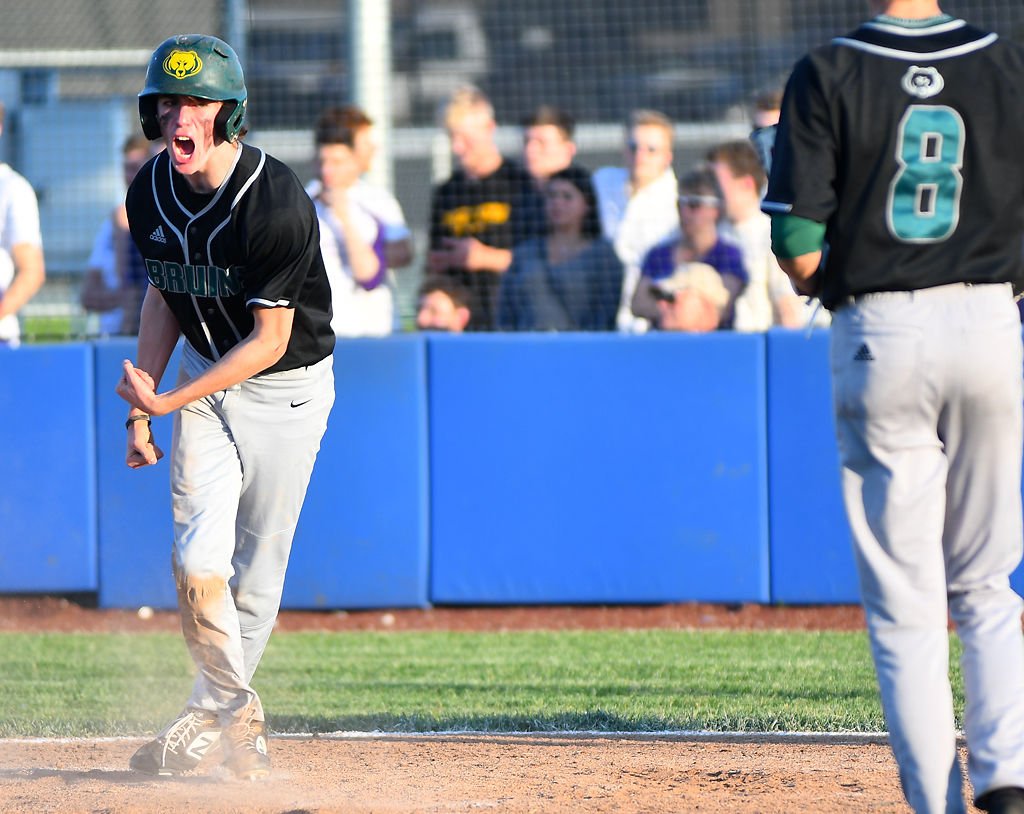 Rock Bridge's Elliot Bachrach screams in celebration after scoring a run during Wednesday's district final against Hickman at Battle. 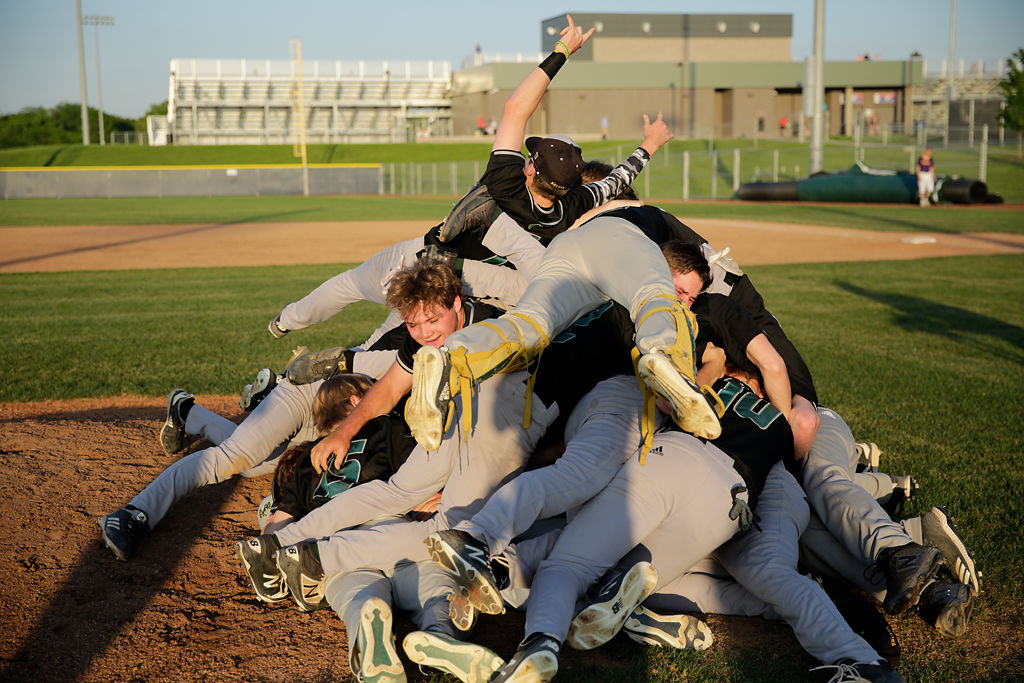 The Rock Bridge baseball team piles up at the pitcher’s mound after defeating Hickman in Wednesday’s district final at Battle. 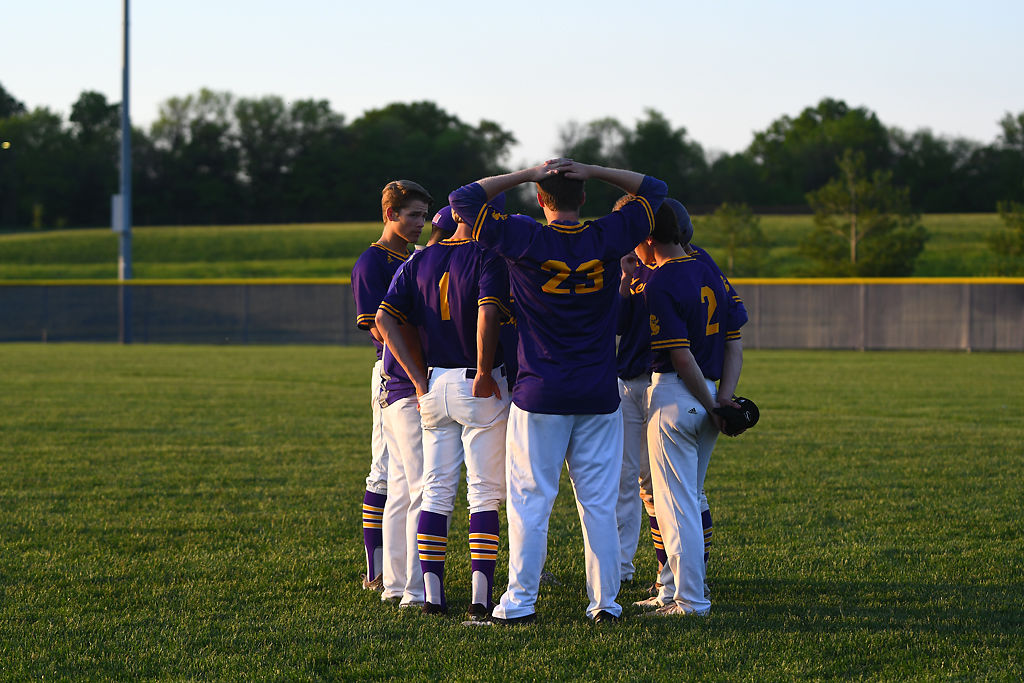 Seniors on the Hickman baseball team huddle in the outfield following a loss to Rock Bridge in Wednesday's district final at Battle. The loss ended the Kewpies' season. 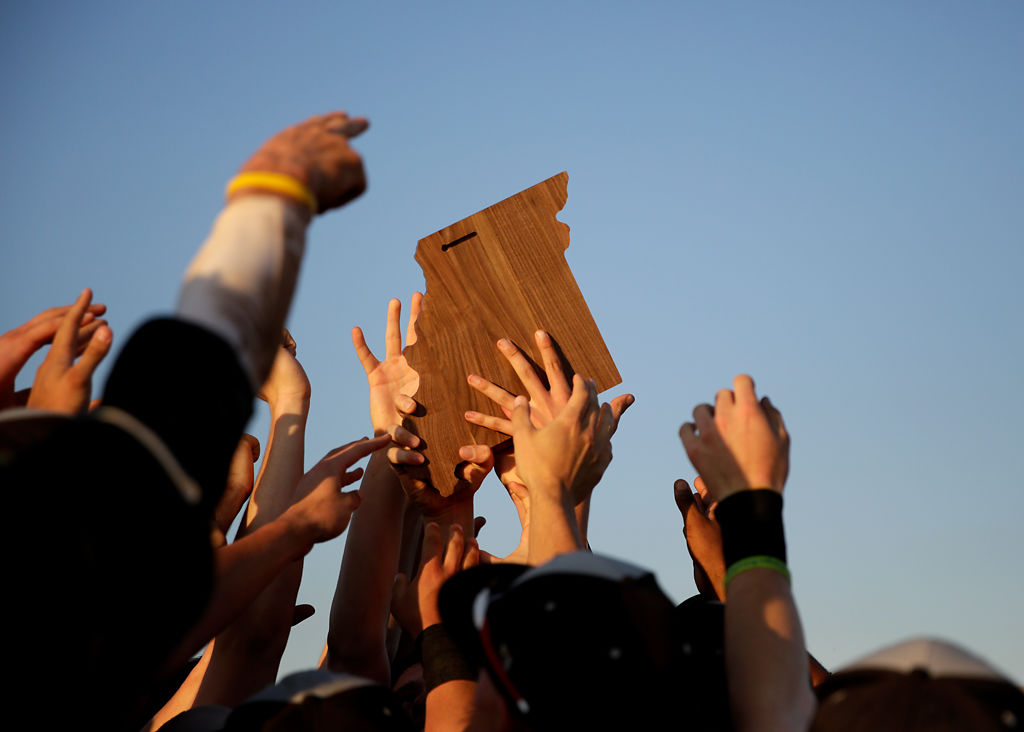 Hoisting the district trophy, Rock Bridge baseball players celebrate on the field together following Wednesday’s district final against Hickman at Battle High School. Rock Bridge’s next game will be in the sectional round Tuesday against Francis Howell. 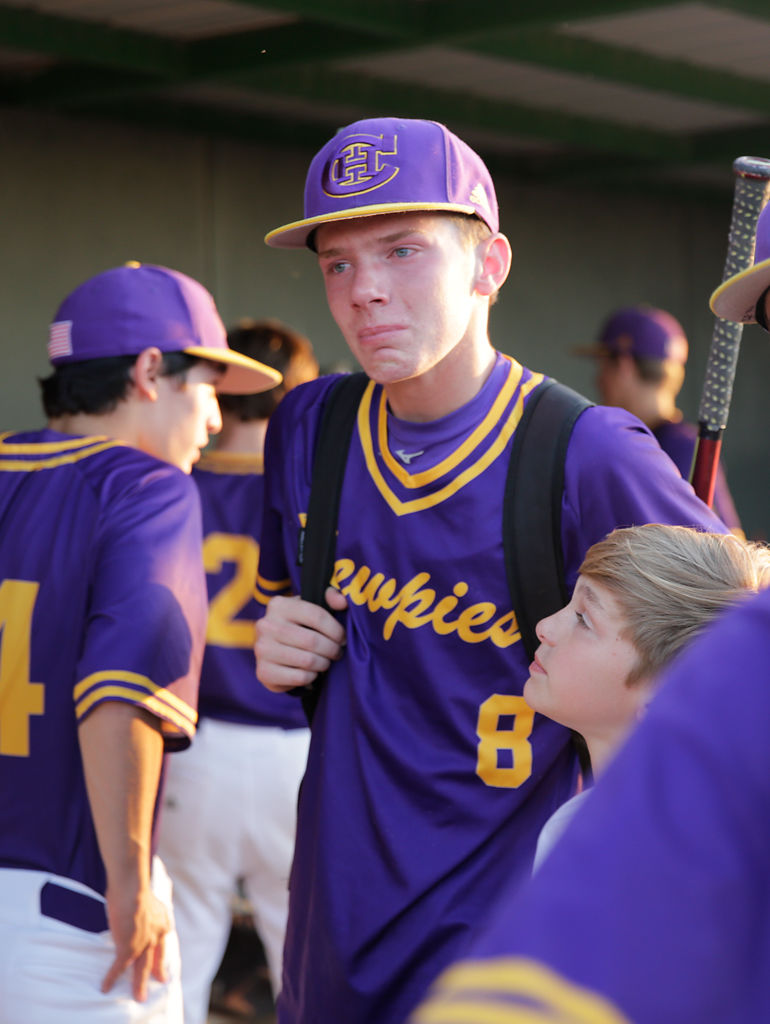 After Rock Bridge senior Zack Hay struck out Hickman’s final batter, senior Conner Ashton — the only batter Hay faced in the game — the Bruins stormed the pitcher‘s mound and formed a dog pile.

In the midst of the celebrating, the players could be heard chanting “banner season.”

It’s a tradition for Rock Bridge to have a banner put up in the school with a photo of the dog pile at the pitcher’s mound after winning a district title. The 2011 Bruins, the team that Rock Bridge head coach Justin Towe called the best he’s ever coached, are missing from the wall after losing in the district championship.

“Nobody knows about them because they don’t have a banner up,” Towe said.

The Class 5 District 8 championship game was the third meeting between the rivals this year, with Rock Bridge winning all three. However, the familiarity between the two teams made it harder for the Bruins to keep winning.

“They know you better; they know what you like to do better,” senior pitcher Spencer Miles said. “They come up there with more confidence and swing harder.”

With both teams using their best pitcher — Miles for Rock Bridge and junior Kyle Brown for Hickman — each side knew it would once again be a low-scoring fight.

Both pitchers excelled during the game, but Miles got off to a rocky start in the first inning, allowing one hit and walking two to load the bases.

“I couldn’t throw fastballs for strikes,” Miles said. “I tried to focus up and get ground balls and strikeouts.”

Towe was worried Miles wouldn’t be able to finish the game after the number of pitches he threw in the frame. Miles settled in, though, striking out eight batters the rest of the way.

Hickman seemed to have control on the offensive side for most of the game, getting four hits through five innings, while Rock Bridge was held hitless until the fifth. The Bruins didn’t even have a base runner until then.

Hickman had its best opportunity to score in the top of the fifth. A double from Brown with two outs gave the Kewpies a runner on second, and Rock Bridge chose to intentionally walk Ashton, the Kewpies’ best hitter. An errant pitch allowed sophomore Gage Slaughter, who was running for Brown, and Ashton to advance to second and third.

Senior Coulton Doyle, another one of Hickman’s best hitters, was at the plate during the errant pitch, and after the two runners advanced, Rock Bridge once again decided to issue an intentional walk, loading the bases.

The strategy worked out for Rock Bridge, as Miles struck out sophomore Raymond Schroeder to end the inning.

The three stranded runners were part of the nine Hickman left on base. By comparison, Rock Bridge only had one.

With the game scoreless heading into the bottom of the sixth following three consecutive strikeouts by Miles, Rock Bridge did what it has done all season: score runs when it needs them most.

After junior Travis Bassford led off the inning by taking a pitch to the face, junior Clayton Schneider sacrifice bunted to advance him to second. With a runner at second, leadoff hitter Spencer Nivens hit a ball toward Hickman shortstop Francisco Villarreal, who committed an error, allowing Bassford to come home for the first run of the game.

Rock Bridge scored twice more in the inning to take a 5-0 lead.

Miles got through two batters in the seventh before reaching pitch count. Hay finished the game for the Bruins.

The win was sweet revenge for Rock Bridge, which lost to Hickman in the district championship a year ago by a single run.

“Ever since we lost last year, we had some unfinished business,” Nivens said. “To come back out here and get the game that we wanted and get the job done, like we were unable to last year, just means the world to us.”

Towe said he was just happy to win the game, rivalry or not.

The win was No. 28 for Rock Bridge, which ties the school record.

Hickman finds itself on the opposite side from a year ago. After coming into the season with state championship aspirations following a deep playoff run last year, the Kewpies were unable to repeat as district champions in an up-and-down year.

“It’s just like life; you’ve got to bounce back,” Hickman head coach Mason Mershon said. “We played well for the most part. At the end of the day, I’m proud of these guys.”

Rock Bridge advanced to the sectional round, where it will play Francis Howell. The Bruins defeated Francis Howell 6-4 on April 20.

The sectional game will be played Tuesday at Francis Howell in St. Charles.

Rock Bridge and Hickman faced off for the district championship on Wednesday at Battle. The Bruins scored five runs in their final at-bat of t…