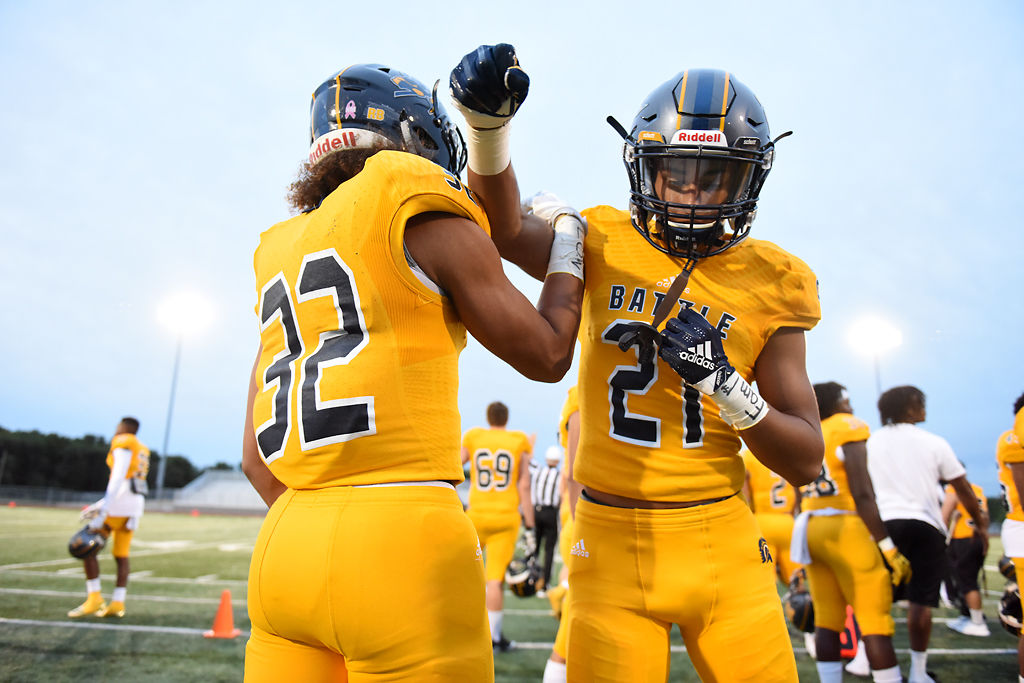 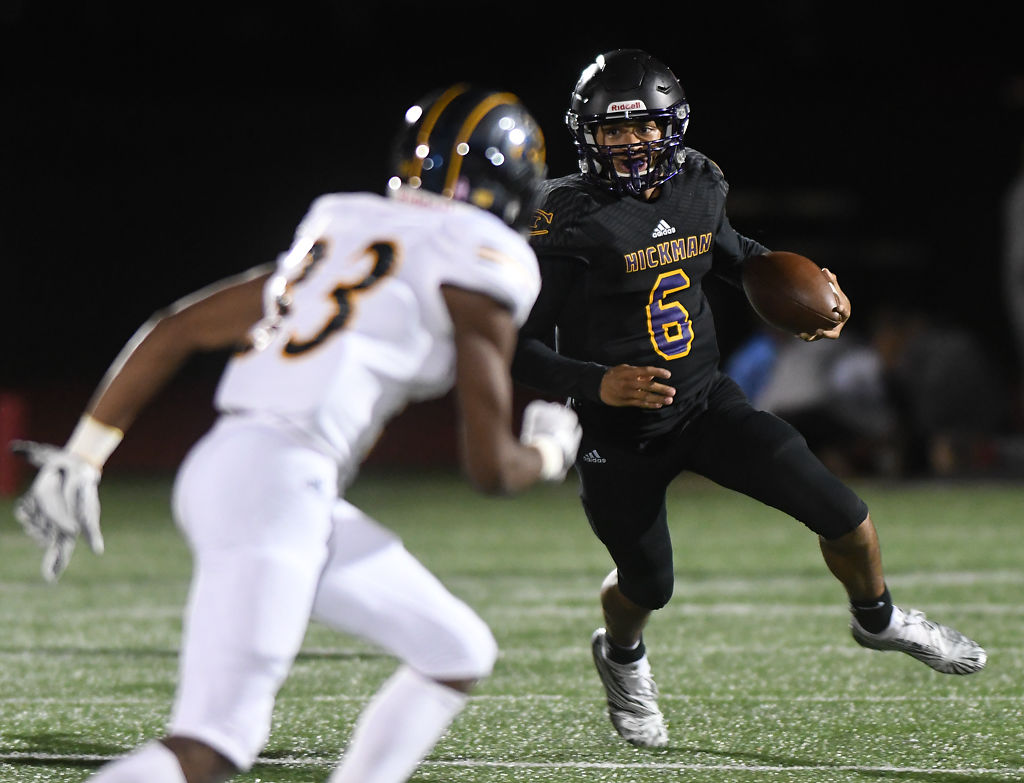 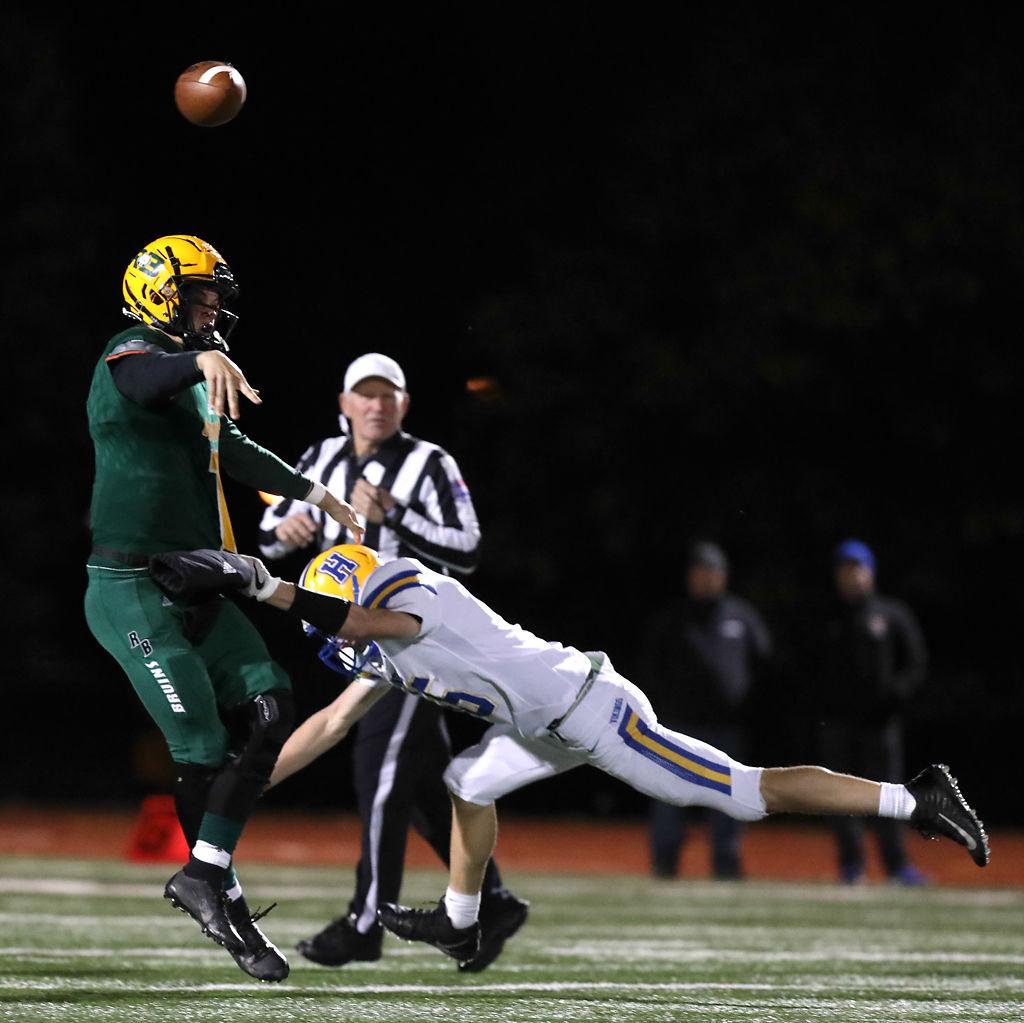 Rock Bridge quarterback Grant Hajicek throws the ball away to avoid being sacked by a Francis Howell defender during the semifinal game of the Class 6 District 2 tournament on Nov. 2 at Rock Bridge High School. The Bruins defeated Francis Howell 35-10. 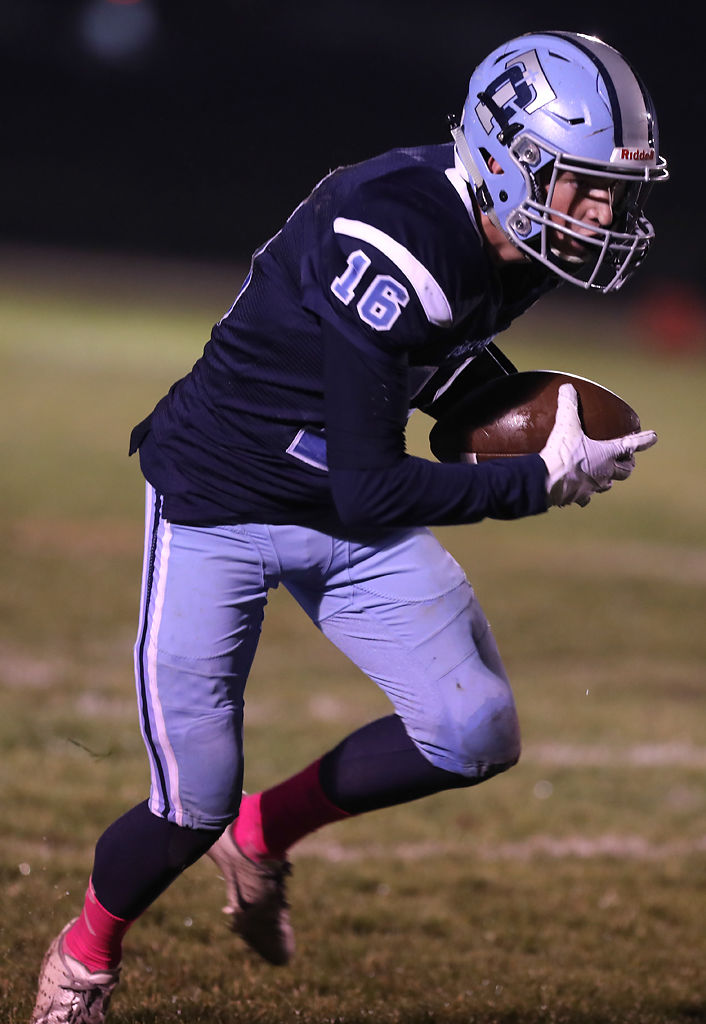 Rock Bridge quarterback Grant Hajicek throws the ball away to avoid being sacked by a Francis Howell defender during the semifinal game of the Class 6 District 2 tournament on Nov. 2 at Rock Bridge High School. The Bruins defeated Francis Howell 35-10.

With “dead week” for Missouri prep football almost over, Columbia’s high school programs — Battle, Hickman, Rock Bridge and Tolton — resume practice Monday as they prepare to kick off the regular season on Aug. 30. Before the teams start up again, get caught up on what each one will bring to the field in 2019.

Team outlook: For the first time in school history, Battle will have a new person calling the shots.

Justin Conyers, the only head coach the Spartans have ever known, left this past spring to take the job at Hallsville. But Battle brought back a familiar face to take his place in Atiyyah Ellison. Ellison, who was an assistant under Conyers, will take the reins of a squad looking to push its streak of district championships to six.

Head coach will not be the only spot the Spartans are transitioning this season, though. After only using two starting quarterbacks in six years in Brevinn Tyler and Jaren Lewis, the top spot on the depth chart is still up in the air. These next few weeks will see Khaleel Dampier and Harrison Keller battle it out for the starting job.

Where Ellison does return a lot of experience is at running back. The duo of Darren Jordan and Daleshaun Coleman should pick up where they left off in 2018, when they racked up over 2,000 yards on the ground. While losing Lewis does hurt the rush, Jordan and Coleman should be enough to ensure that Battle has another high-powered offense in its quest for another district title.

Coach Ellison on continuing Battle’s district championship streak: “Being around coaches that know what they’re doing and have a process, have a set up, have a game plan, it filters down to you being a position coach. Winning is an attitude, even going back to my Mizzou days, and they teach you all the things that I’ve mentioned that go into winning. It’s not just you try hard and that’s going to get you the win. It’s hard to win. But we have keys to success. I’ve already got them written down. We have a game plan, (the players have) got to trust our plan and execute the plan.”

Team outlook: Things have been looking up for Hickman since new head coach Cedric Alvis was brought in for the 2018 season.

Christian Davis, the Kewpies’ top running back and star offensive player, helped lead the team to a 2-8 record, its best since 2013. The record last season is a bit misleading, as Hickman was within a couple scores throughout most of its losses before falling apart at the end, which Alvis said is one of the main things he’s focused on fixing.

And with a newly renovated locker room to act as the cherry on top, the Kewpies are ready to work to reach the heights they haven’t seen since their 2004 Class 6 state championship squad.

Losing Davis will be tough, especially considering he was the school's first running back to rush for over 1,000 yards since 2012. But Hickman will benefit from a full season under quarterback Jevean Brown, who played off and on last year in between his appeal of an illegal transfer tag by MSHSAA and a broken clavicle he suffered against North Kansas City.

Brown, a senior who can hurt opponents both on the ground and in the air, will be a huge part of the Kewpies’ attempts to take that next step. And in year two with Alvis at the helm, Hickman should keep moving further away from the team that went just 3-37 from 2014-17.

Coach Alvis on putting together complete games: “I want to see our kids play a complete game. Last year, we were 2-8 but we were really close in a lot of games. We weren’t able to put a full four quarters together, but you look at a lot of different teams that we were able to compete with that were ranked at different places in the state. It kind of gives you confidence going into it that, if you can put a full four quarters together, who knows what can happen and what you’ll be able to achieve.”

Team outlook: When Van Vanatta took the head coaching job at Rock Bridge prior to the 2017 season, he had a tall task ahead of him. The Bruins were in the midst of a string of down years, including back-to-back 2-8 records in 2015 and ‘16, and hadn’t had a winning record since 2013 when they reached the Class 6 championship.

The path there isn’t all that easy, as Rock Bridge plays in Class 6, which forces them to play early on some of the best schools Kansas City and St. Louis have to offer. With the loss of the one the school’s most decorated running backs in Nate Peat, who now plays at Stanford, the path won’t get any easier in 2019.

But Vanatta returns a wealth of experience defensively, including two players with connections to Missouri — Will Norris, who committed to the Tigers in July, and Jalen Logan-Redding, who included Missouri in his final four schools in June. As Vanatta looks to get over the hump in year three, he’ll be leaning on these playmakers to lead the way.

Coach Vanatta on getting Rock Bridge to the next level: “My first year here, we made it to the second round, and then last year we made it to the district finals. I believe we could’ve made it to the state game, but when you get deep into the playoffs it’s going to be a dog fight and every team you’re facing is pretty darn good. But I’m not satisfied with where we ended last year. In order to take that next step, number one, you’ve got to stay healthy, and number two, guys have got to take over their roles, and I think that’s the key.”

Team outlook: Another Columbia team is bringing in a new head coach, as Michael Egnew will take over at Tolton for the 2019 season.

Egnew, who played tight end for Missouri and was an All-American in 2010, brings experience as a coach at the collegiate level after being a support staff member under both Missouri’s former offensive coordinator Josh Heupel and current coordinator Derek Dooley. He was also a volunteer coach with the Trailblazers in 2015.

Egnew said that the team will look different under him than it did in years past, which might be a good thing. Tolton hasn’t finished with a winning record since 2015. The Trailblazers, though, finished last regular season on a two-game win streak and won its first playoff game before falling to Blair Oaks in the district semifinals, showing it had the potential to take a step forward in 2019.

However, that step will have to come without star lineman Monroe Mills. Mills, who tore his ACL in June and will sit out his last high school season, was expected to be the heart and driving force of Tolton’s offense. With some of the players the Trailblazers lost to graduation, Mills was supposed to be a big part of the continuity of the team. Instead, he’ll be watching from the sidelines.

But Egnew still believes his team has district championship potential, and he’s ready to turn his program into one where winning is the expectation.

Coach Egnew on what he brings to Tolton: “I feel like I’ll be able to bring a little bit more experience because I’ve played almost every position. I kind of have a different view on how to approach the ball. Plus, I was at Missouri with Heupel and then with Dooley. ... I bring all of that experience with me, so there’s some things that I’ll be able to do differently. The team will look different this year than it did last year.”

Missouri gymnastics dominates on beam despite slim loss to Auburn

On a three-game losing skid, Missouri can rejuvenate its season with upset at West Virginia

Battle falls short in second round of Bill Hanson Tournament