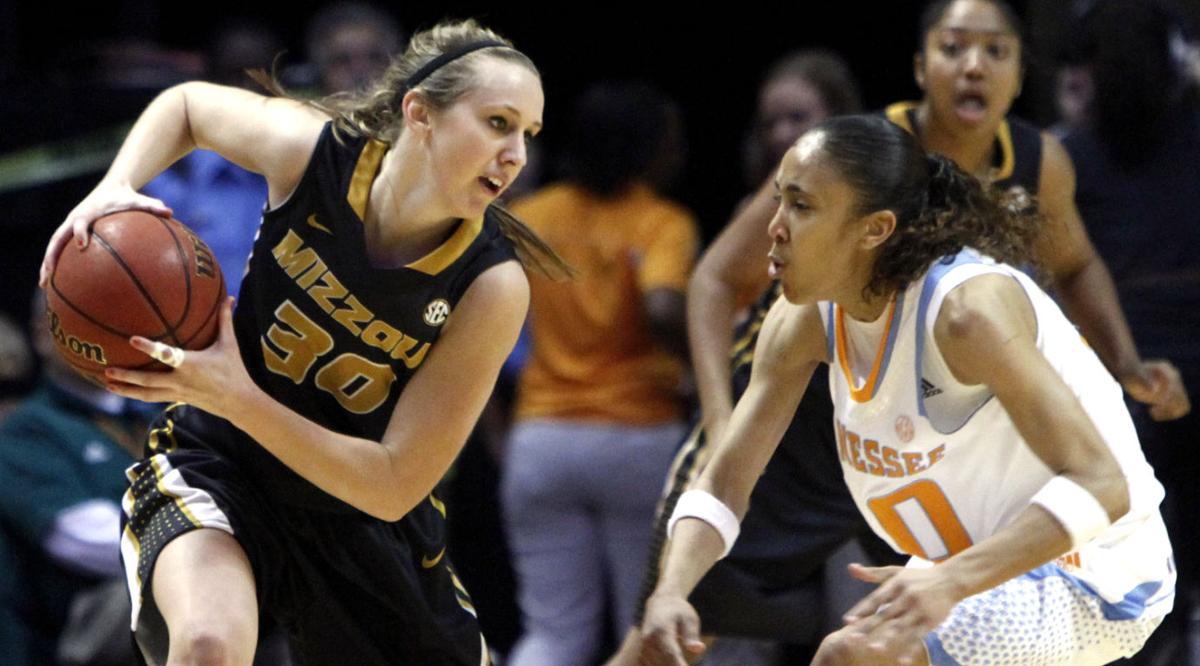 By the time Morgan Eye (No. 30 here against Tennessee in 2013) was finished at Missouri, she was the program's all-time leader in 3-pointers. Eye (now Morgan Scott) is the new girls basketball coach at Hickman. 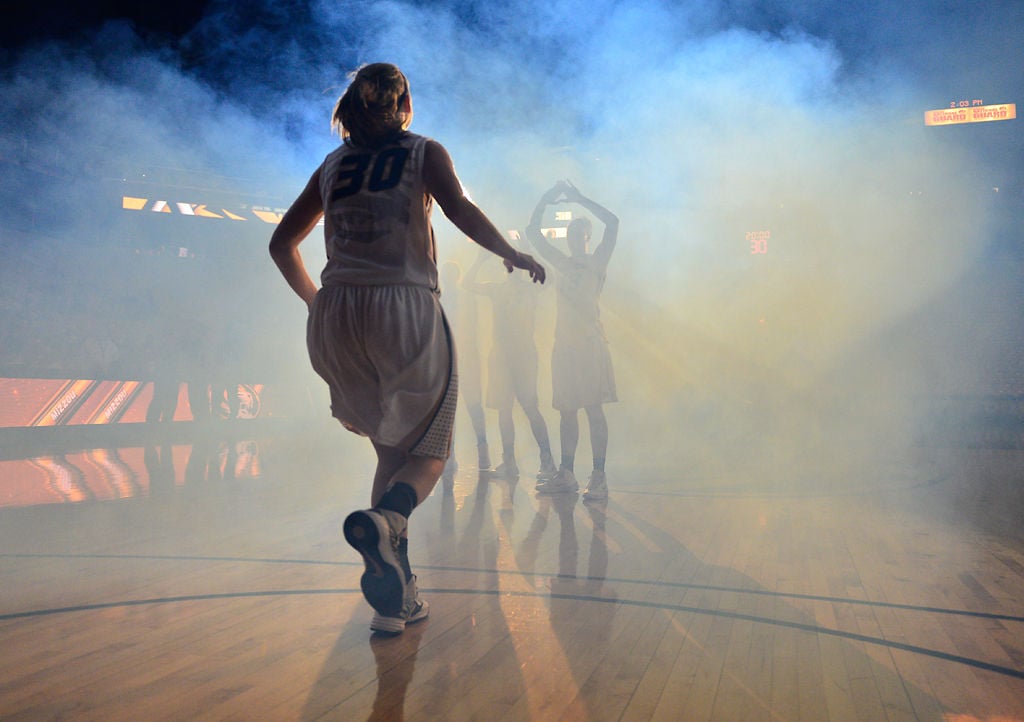 Morgan Eye Scott, the new girls basketball coach at Hickman, makes a grand entrance to the court before Missouri played the Arkansas Razorbacks in January 2014. 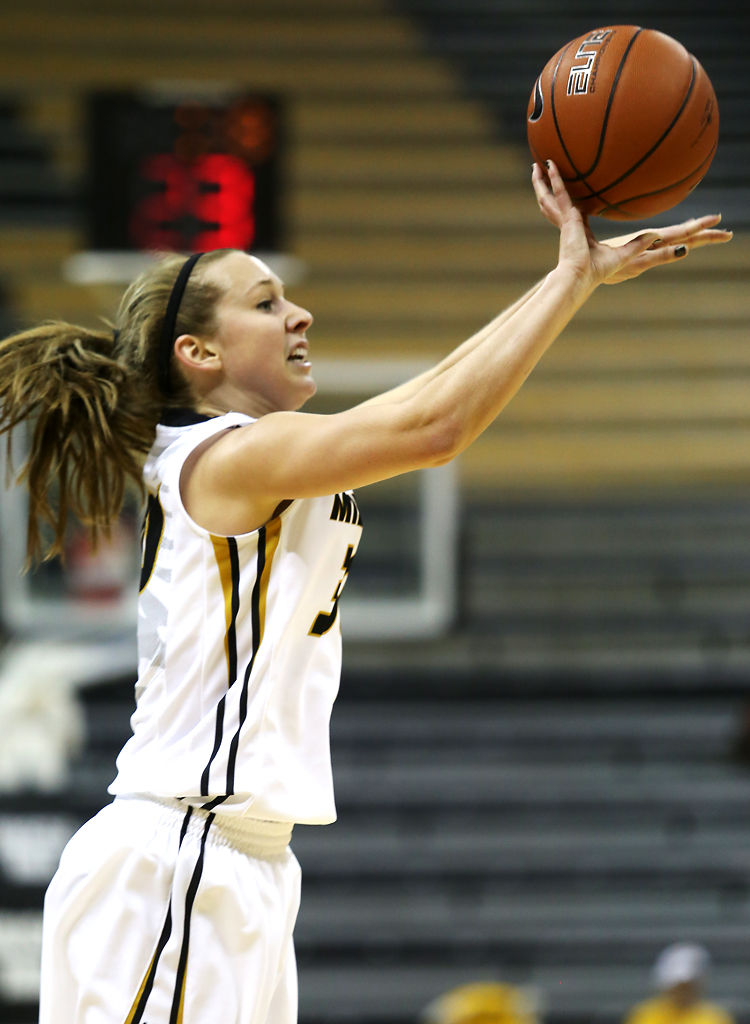 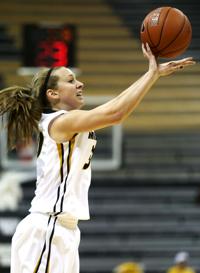 Former Missouri guard Morgan Scott, shown here against Western Illinois in December 2013, finished her career at Missouri with 367 3-pointers, the most in program history.

By the time Morgan Eye (No. 30 here against Tennessee in 2013) was finished at Missouri, she was the program's all-time leader in 3-pointers. Eye (now Morgan Scott) is the new girls basketball coach at Hickman.

Morgan Eye Scott, the new girls basketball coach at Hickman, makes a grand entrance to the court before Missouri played the Arkansas Razorbacks in January 2014.

Former Missouri guard Morgan Scott, shown here against Western Illinois in December 2013, finished her career at Missouri with 367 3-pointers, the most in program history.

On June 12, Hickman High School brought Morgan Scott back to Columbia as the head coach of its girls basketball team.

Formerly known as Morgan Eye (she married Michael Scott after she graduated), Scott is most known for her prestigious career as a sharpshooting guard for Missouri from 2011-15.

Scott ranks 14th in program history with 1,374 career points and was named the SEC’s Co-Sixth Woman of the Year in 2013.

The Missourian spoke to Scott in a phone interview about her coaching style, what she’ll bring to the Kewpies and her vision for the program.

“First off, just being able to balance all the different unique personalities we’re going to have,” she said. “I’m a relationship-driven coach and so I want to get to know everyone and make sure I have strong relationships with each individual. That’s what drives me as a coach, so to make sure I can balance that will be very important.”

Rekha Patterson, head coach of women’s basketball at Southeast Missouri State, knows she means it. Scott worked on Patterson’s staff as an assistant coach from 2017-2019.

”The number one thing is her heart,” Patterson said. “When you’re teaching young people, you got to have the heart to do it. I think that’s really, really important. I think her ability to communicate, her knowledge and experience as a record-setting Division I basketball player speaks volumes. It makes people buy in right away because she’s bought in.”

When asked if her background as a sharpshooter factors into her coaching philosophy, Scott shrugged it off.

“We’ll definitely emphasize shooting, but it won’t be the only thing we emphasize,” she said. “We want to run a motion offense, and the biggest thing with a motion offense is it helps kids learn the game and why you do certain things. I think that shows our kids that a lot of the work has to be put in on their own, understanding if you want to be good versus being great. It’s going to take a lot of outside practice.”

Randi Henderson, head women’s basketball coach at Washington University in St. Louis , pointed to Scott’s work ethic as one of the traits she brings to Hickman. Scott was on the WUSTL staff from 2019-20.

Henderson said, “She’s got a good basketball mind and she knows what hard work is. She has a good pulse for team dynamic. For us, she did some video and film breakdown, so she has a good understanding for the game. She was a great player and her ability to be a great player came directly from her hard work, so I think she just understands what it means to be a good teammate and a part of a really good program.”

Team dynamics was one of the major factors that led Jack Rubenstein, athletic director at Hickman, to pursue Scott as a head coach candidate.

“We’ll look for her to build good relationships with the kids. We want the girls to have a positive, uplifting culture where there’s trust and respect but also with a strong work ethic,” said Rubenstein. “I know Morgan is able to build that culture within the program.”

At the end of the interview, Scott was asked about her vision for the program.

“I think my vision for the program is when people come to watch us, we’re the team that nobody wants to play because we play so hard,” she said. “We’re the first to the floor for loose balls. We’re going to tire you out. We’re going to have kids running up and down the floor just giving it their all. We’re having fun. We’re energetic. We’re high-fiving teammates, and we’re picking each other up. We’re a next-play-mentality kind of team and that’s a fun style to watch.

“That’s what I envision: Us just going out there to battle for one another. We’re locking arms, playing for each other and that’s a big thing for me. Not every girl might have the same passion but I want to help them be passionate for one another because you’ll do amazing things when you know the girl next to you would do the same for you.”

Missouri to play Vanderbilt instead of Arkansas on Saturday